Today Bruno from Los Angeles Bikers LLC was leading me to Death Valley but first a minor bucket list opportunity for me. Breakfast in an old school American Diner care of “Cheryl’s Diner” in Kernville. 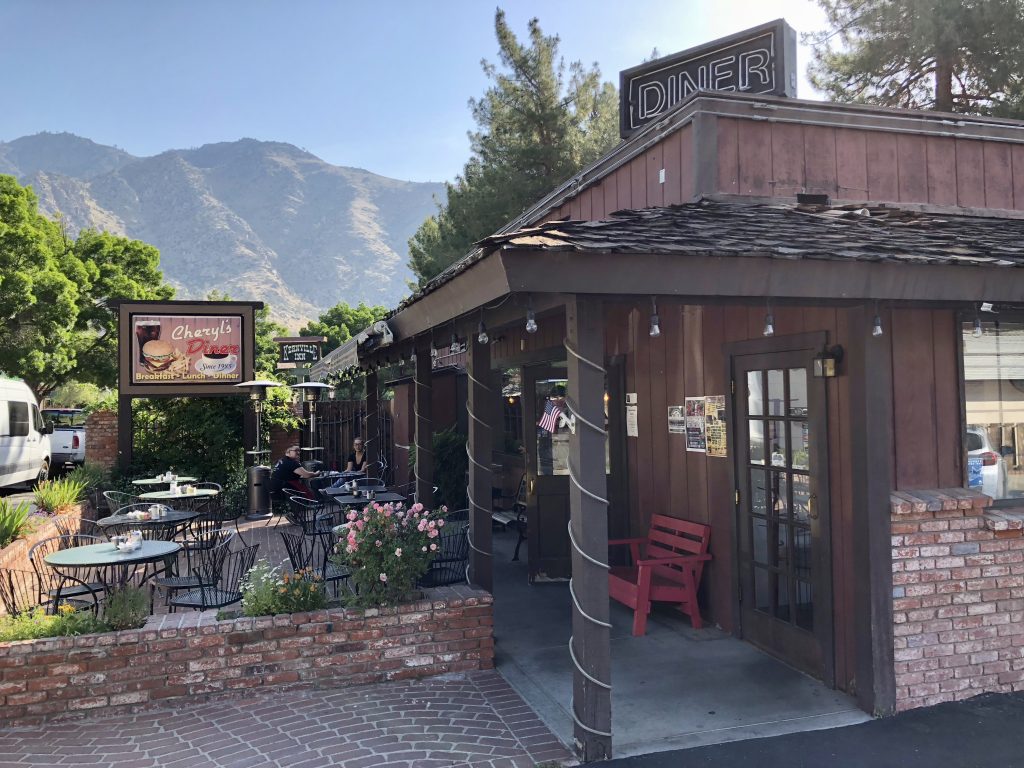 Bacon, eggs, with various potato options (hash brown for me). “Decaf?” get’s a puzzled look but “we can make some”. The Americans seem to love their coffee but it’s not all that good compared to what we are used to at home. The hash browns here are huge, more like Swiss Roesti that fill half the plate! 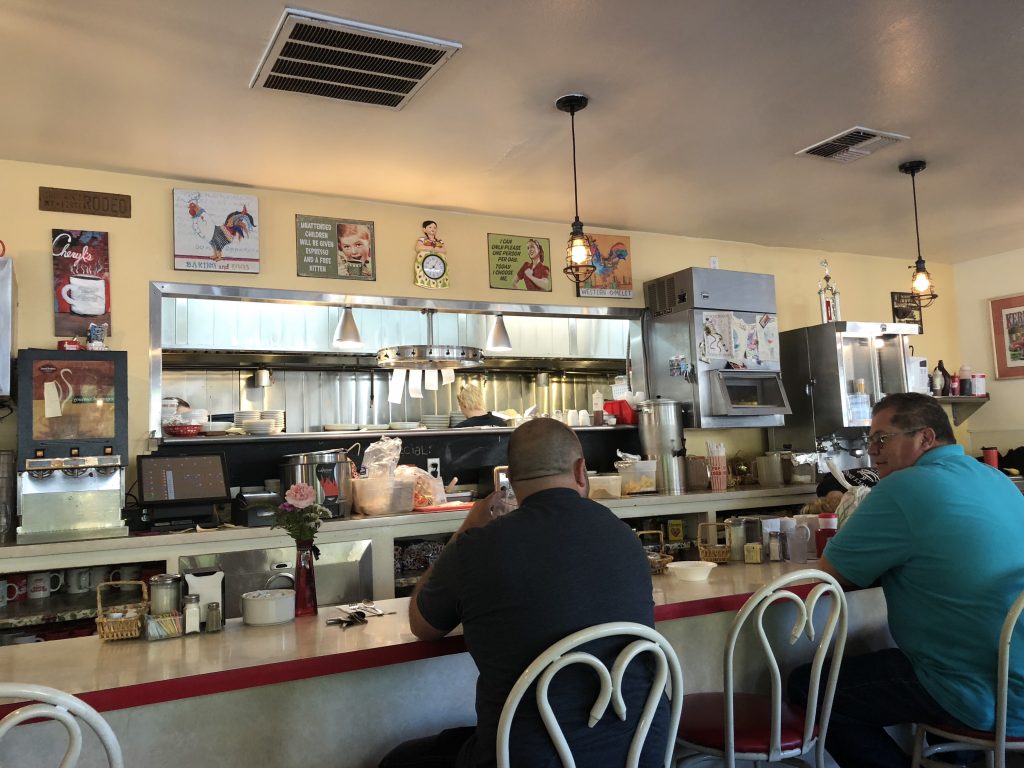 Filled up it was time to head back past Lake Isabella on a beautiful morning. 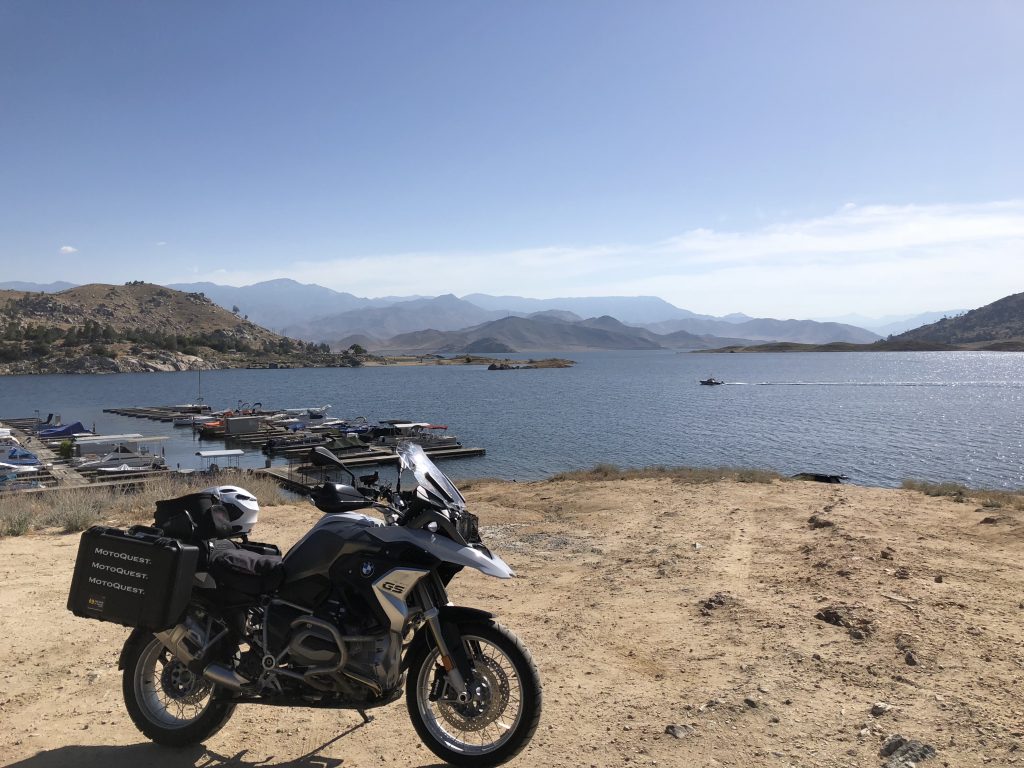 We looped around the lake and took State Route 178  through Onyx where it started to get a little more “deserty”. 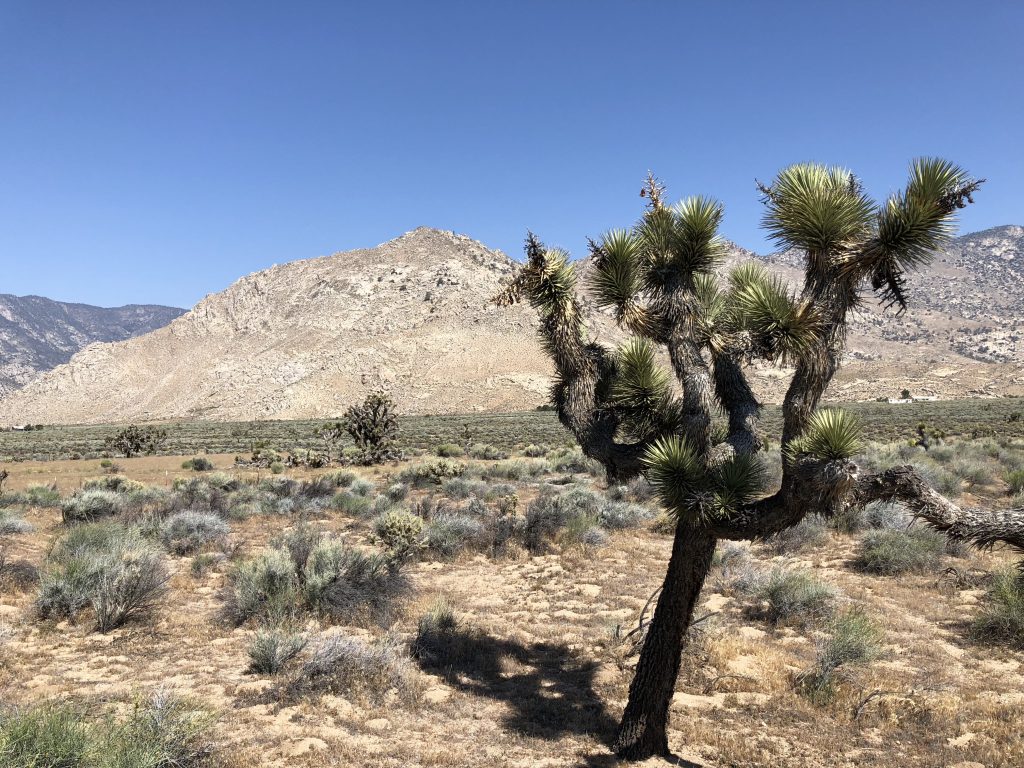 From there we rode through Indian Wells towards Olancha on the 395 and couldn’t resist visiting a really dodgy looking store selling “Fresh Jerky”. The outside of the building didn’t do justice to the range of local delicacies available for sale inside. I bought three packets of Jerky for $33USD in total, expensive I thought until I ate some a few days later. It was gooood! 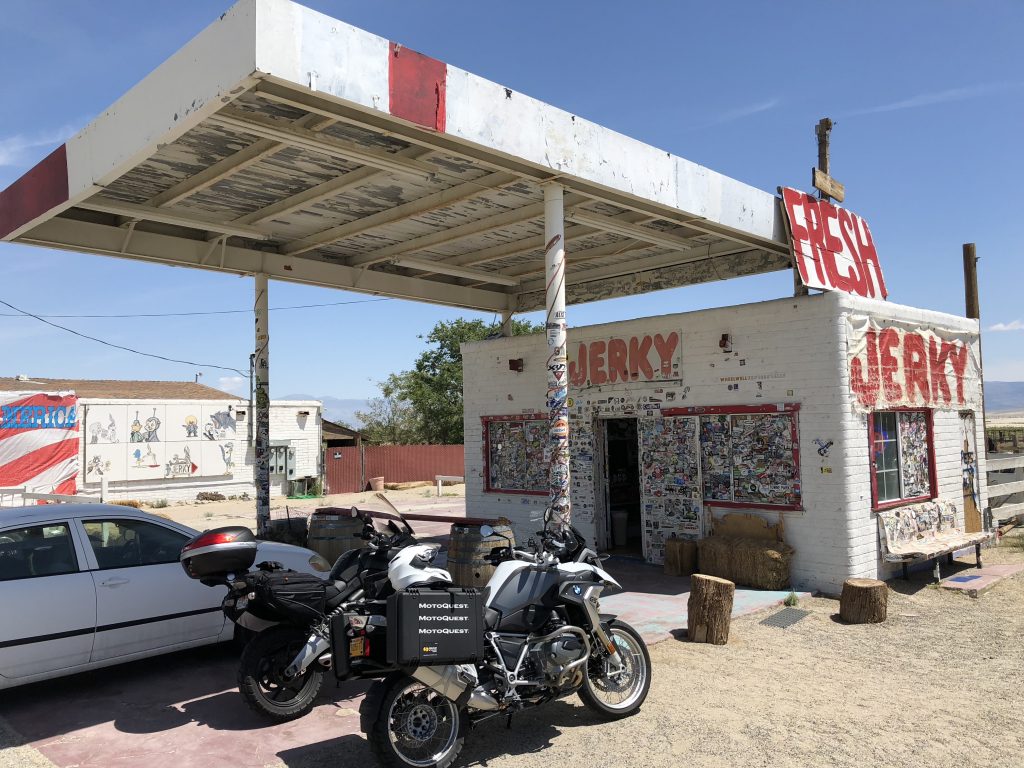 Shortly after that the turnoff towards Death Valley on the 190. 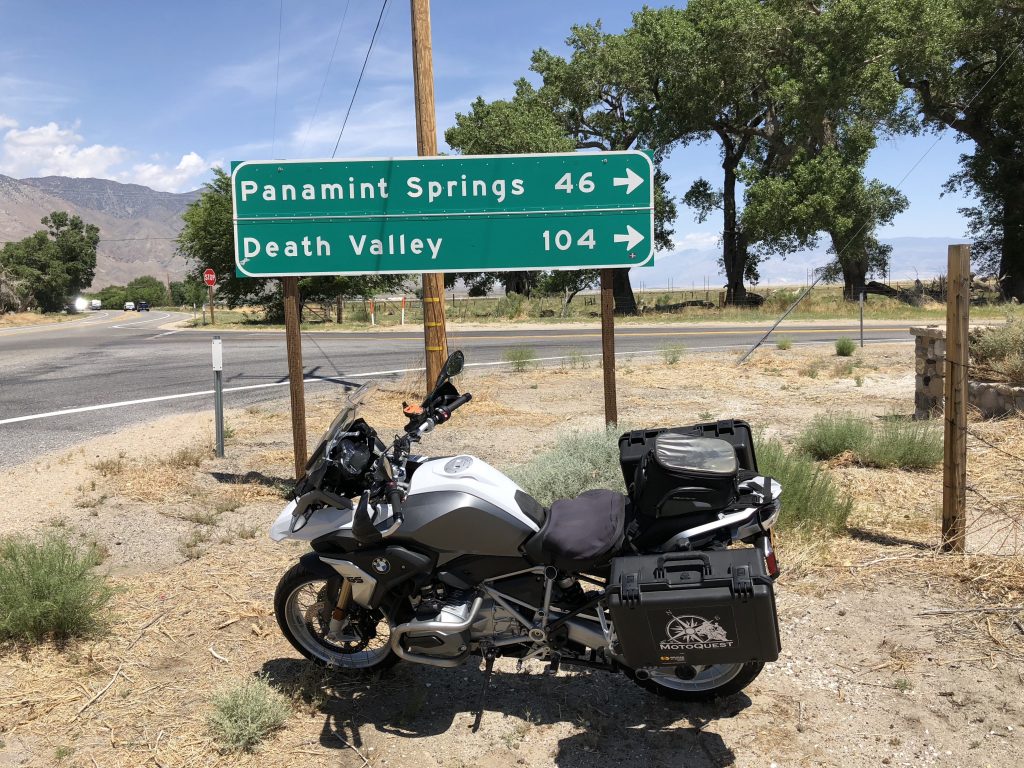 And a sign I couldn’t resist taking a snap of along that stretch. Lucky I didn’t get too far off the road here too, straight into deep sand which made it interesting getting back on to the tar. 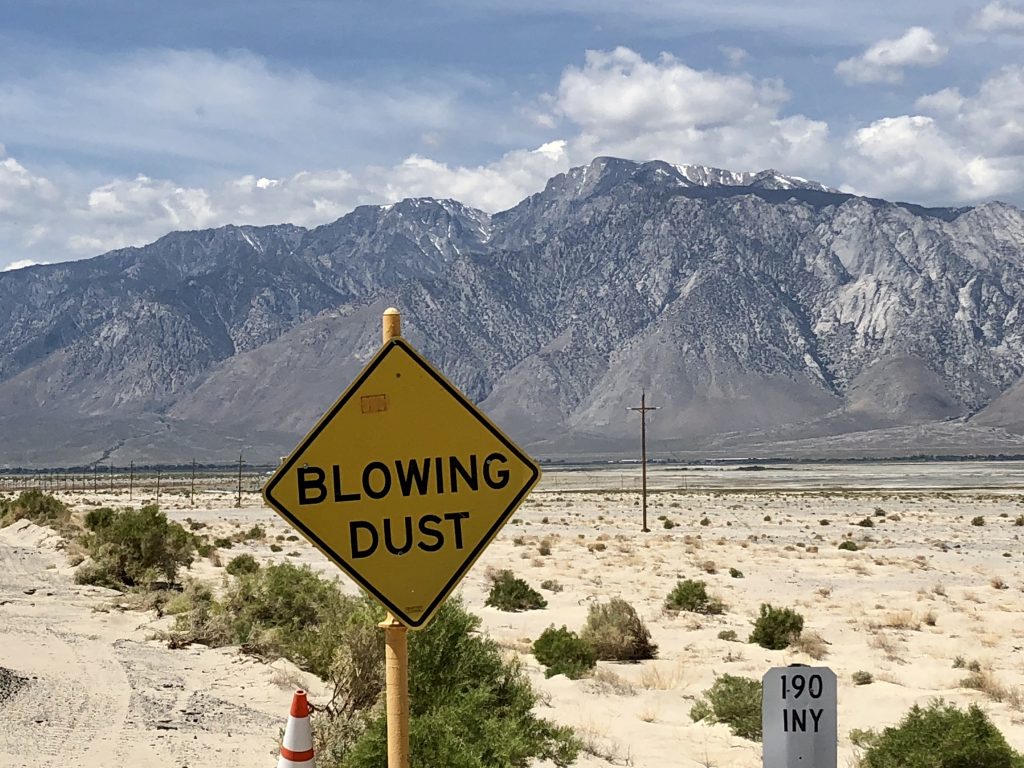 See the snow? From there it was a short ride to the turnoff to Darwin CA. 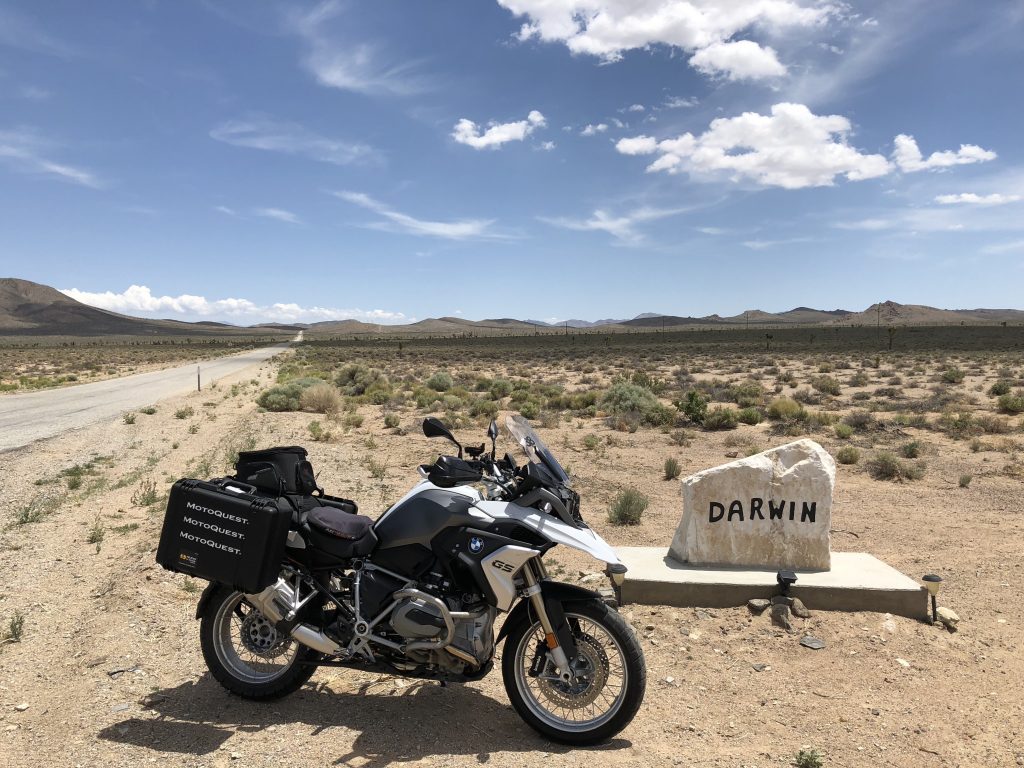 Darwin is almost a ghost town built next to a defunct mine.  There are signs of some residents but mostly it’s building and vehicles returning to nature. 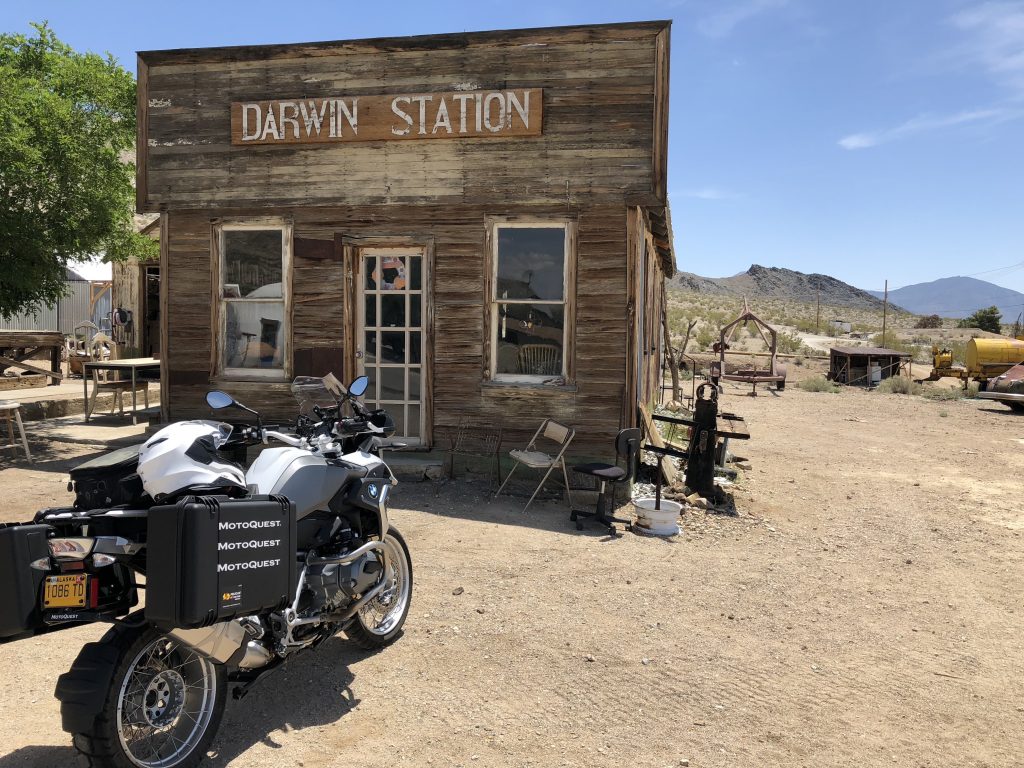 The old post office had an interesting warning in the window 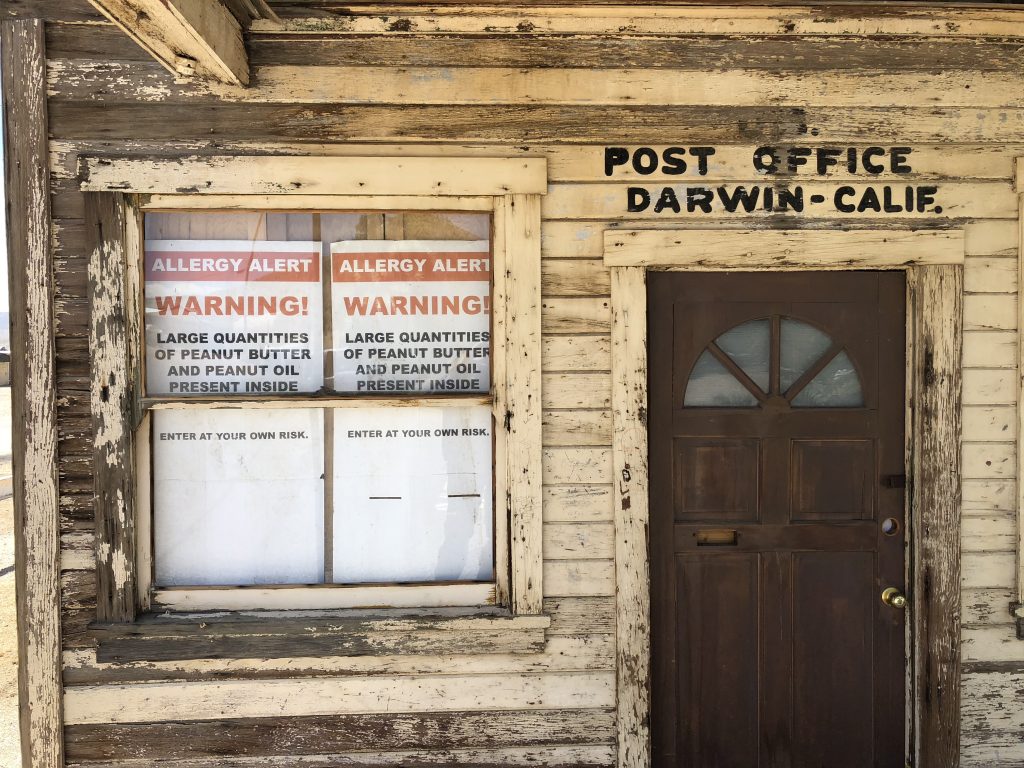 The vehicles were classics 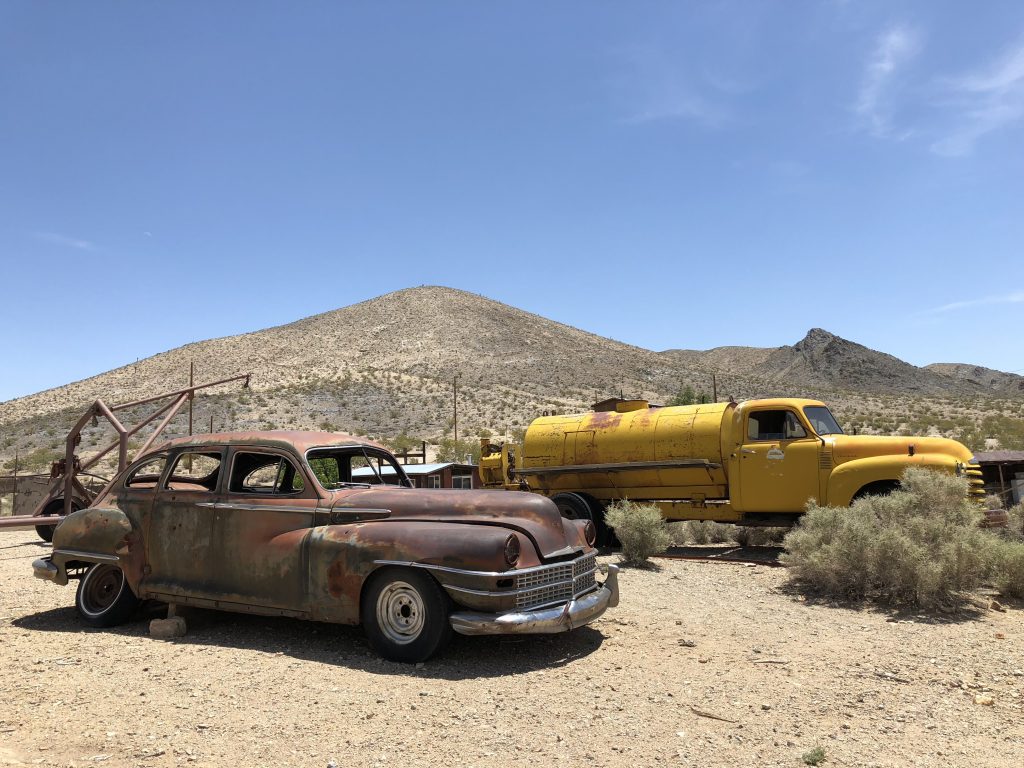 and the streetview was surreal. 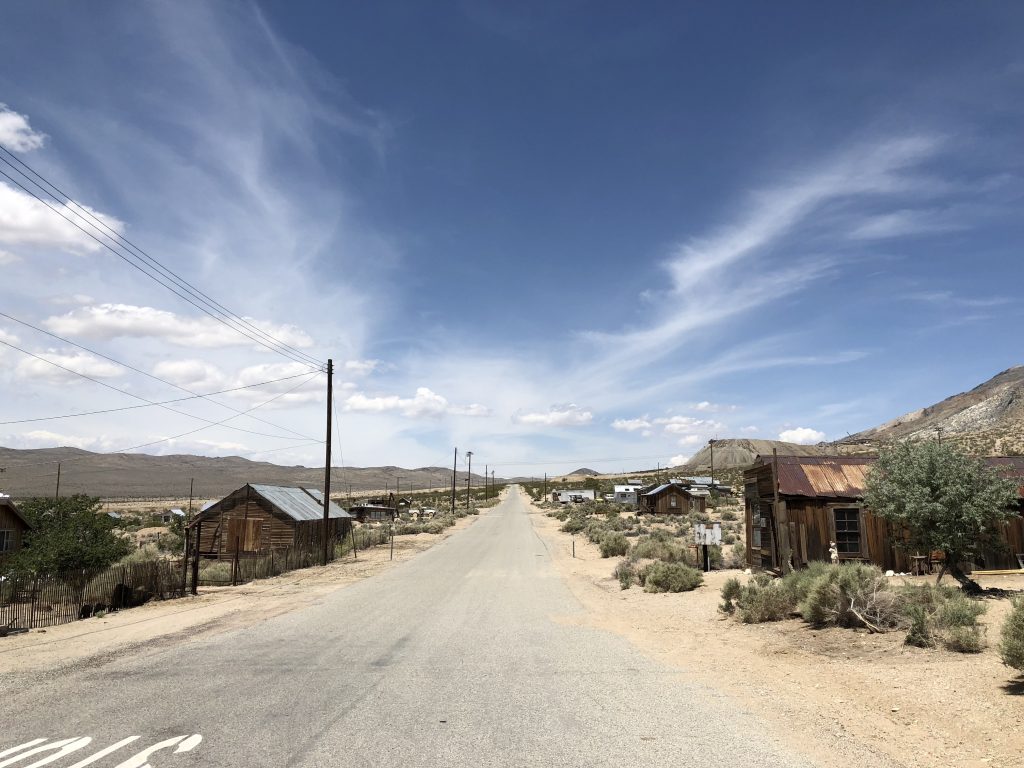 Bruno and I stayed there for a while, had a snack and discussed what sort of place this might have been in it’s day.  Then we moved towards the main event. 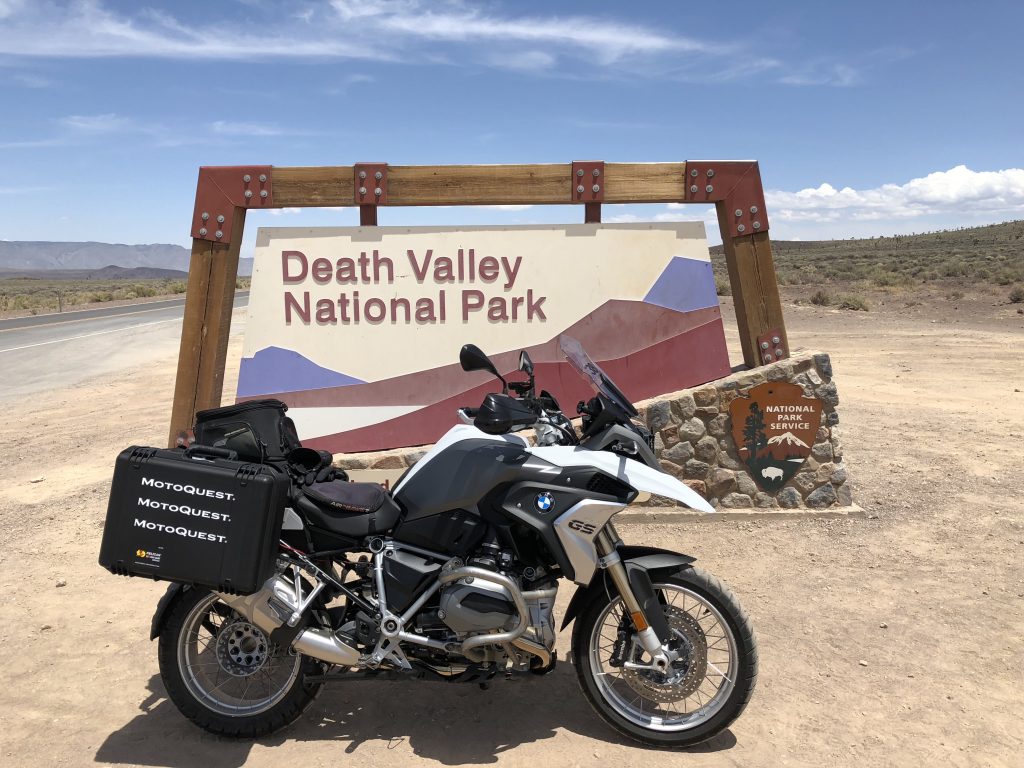 It hadn’t warmed up at this stage and I was wondering what all the fuss was about. We continued on the 190 to the Father Crowley Overlook and it was there I got my first glimpse of the Valley in Death Valley and the amazing scenery and colours. Wow!  The road surface was fantastic and the corners tight and a rush of blood saw me jump ahead of Bruno and savage the chicken strips on the sides of the GS’s tyres. Apparently the speed limit was reduced in that area but maybe I was looking on the wrong side of the road for the signs. 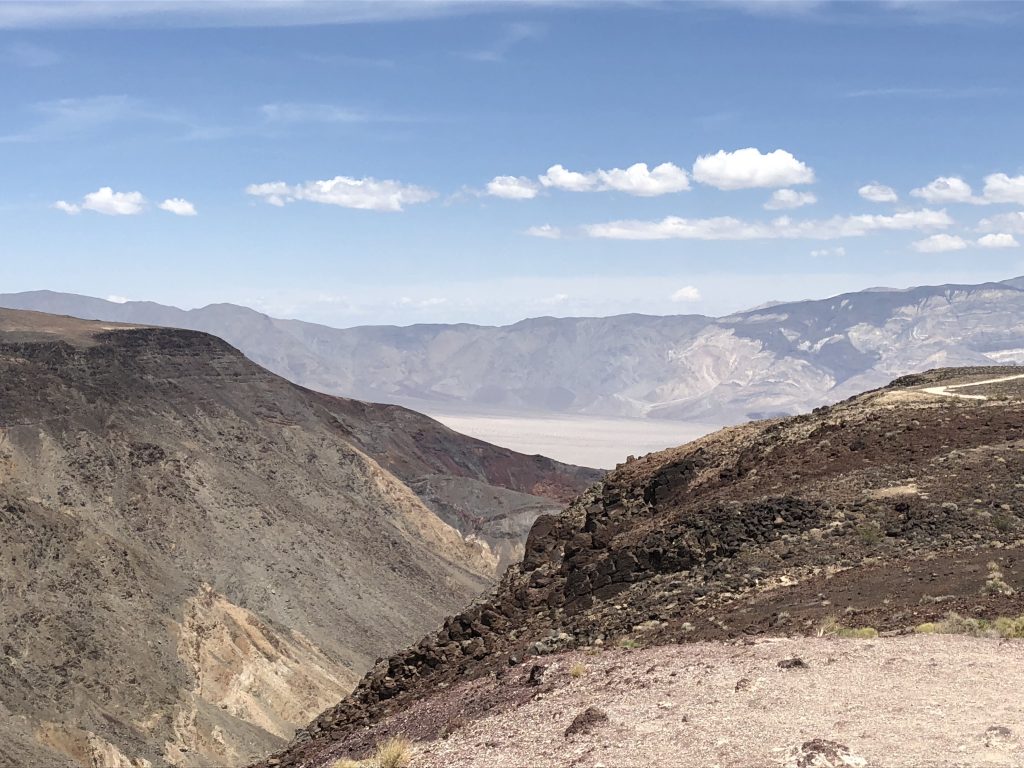 Bruno had rolled past me while I was taking this photo. I jumped back on the throttle and started to wind my way down into the valley. The heat started to rise as I caught up to Bruno at a roadside parking area. We then rode in to Stovepipe Wells with the temperature shooting up to 104F (40C). It was a still, dry oppressive heat but no humidity so it was pretty easy to cope with as long as you didn’t stand still too long. I bought a t-shirt and some powerade and we spend some time sitting in the shade looking at the RV brigade, campers and others dealing with the heat in their own ways.

To get to Furnace Creek, our destination for the day we had to cross the valley Stovepipe Wells was in. In this valley was also a place called Skidoo I would have liked to have visited but had no time. Skidoo is the nickname of a certain madman who’s a mate of mine. Next time. 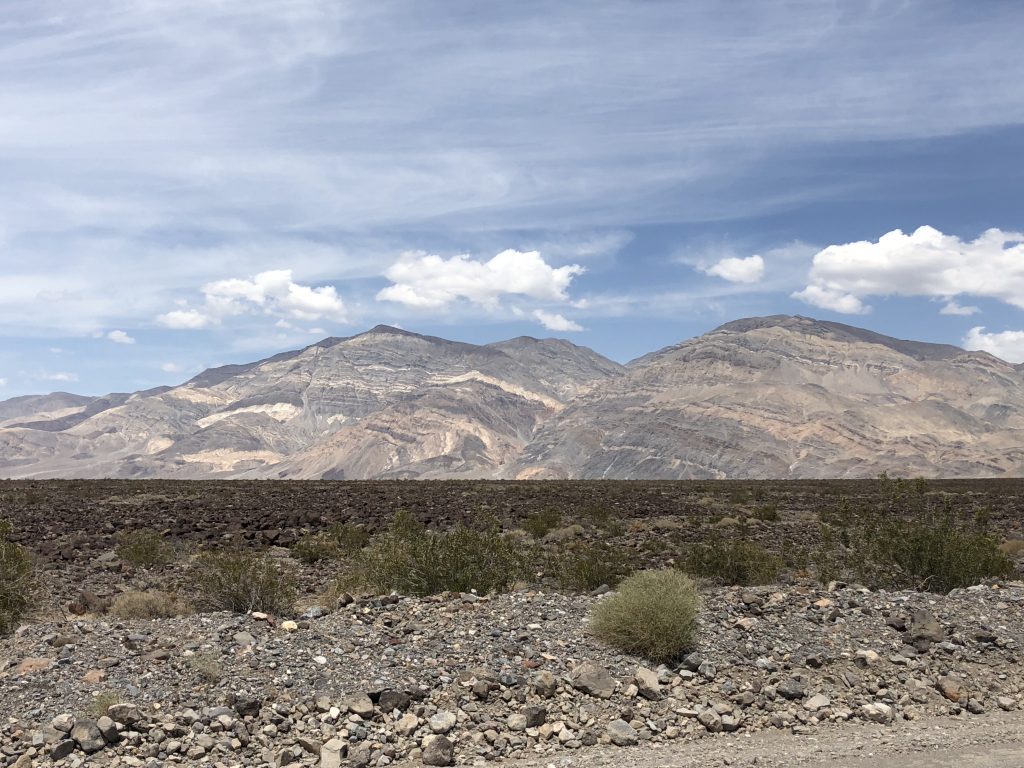 I was captivated by the colours in the mountains, but this was only to be the start of them.  Riding up the pass between two valleys in the Park the temperature dropped back down below 70F (21C) and descending towards Furnace Creek it shot back up.

We made our way to the Furnace Creek Resort, checked in and hit the heated (natural spring heated) pool to cool off. Dinner was a-la-carte up the road, sensational but captive audience(ly) expensive. Thankfully the rooms we stayed in were air conditioned, it didn’t cool down a whole lot overnight even though we were in an oasis! 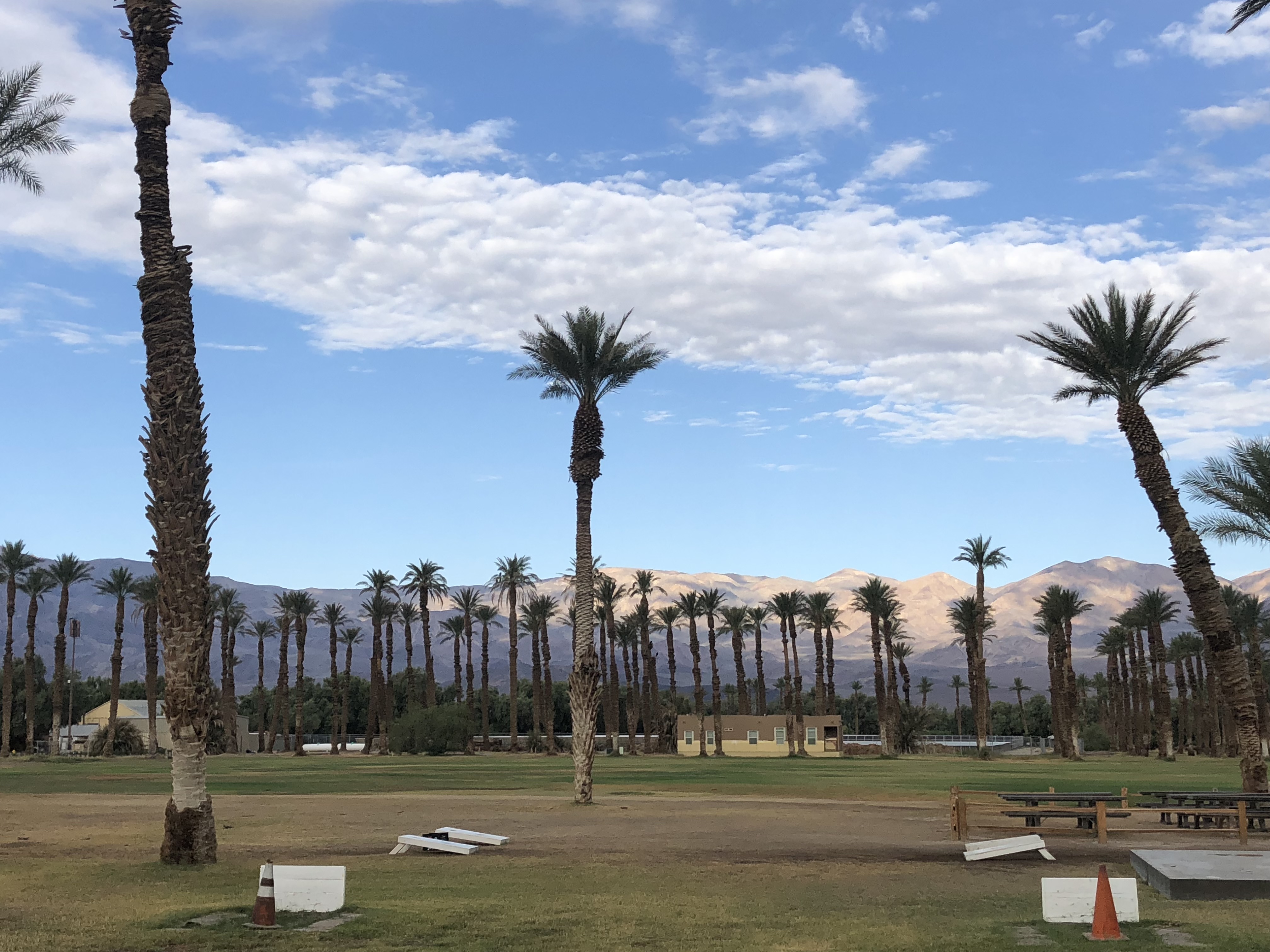 Tomorrow, a good look around Death Valley was planned for me. I was very keen to see more.