I’m not really a late starter in the morning and when you are in Death Valley in May it makes sense to head out early before it heats up too much. Bruno, from Los Angeles Bikers LLC, had a list of highlights to see today.  Having a private tour guide on his own motorcycle was working out pretty well and a big part of that was that Bruno is a good guy with an interesting story. I don’t know how he put up with me though!

So we hit the breakfast at the resort early and paid the “you can’t get breakfast anywhere else in death valley” premium but it was decent food except for the powdered scrambled eggs.  Apparently they don’t make powdered fried eggs so you can’t get them there. The first stop was fuel.  Fuel is a real issue for Aussies in the US with Aussie Credit Cards.  If you try to pay at the pump with a credit card you have to enter a 5 digit postcode, not your pin.  We don’t have 5 digit postcodes so guess what – debit card only at the pump. I had two debit cards and on only one occasion in nearly four weeks I was able to use one of them. Fortunately it was at Furnace Creek that morning because it wasn’t manned at the time.  Every other time I had to take my credit card or cash into the counter, pay, fuel up, walk back inside and either process the cc payment or collect the change. What a pain. Anyhow, I was grateful it worked this once or Bruno would have had to hand me his card, which I’m sure he’d have done.

Not far out of Furnace Creek I couldn’t resist taking a pic next to this scenery. 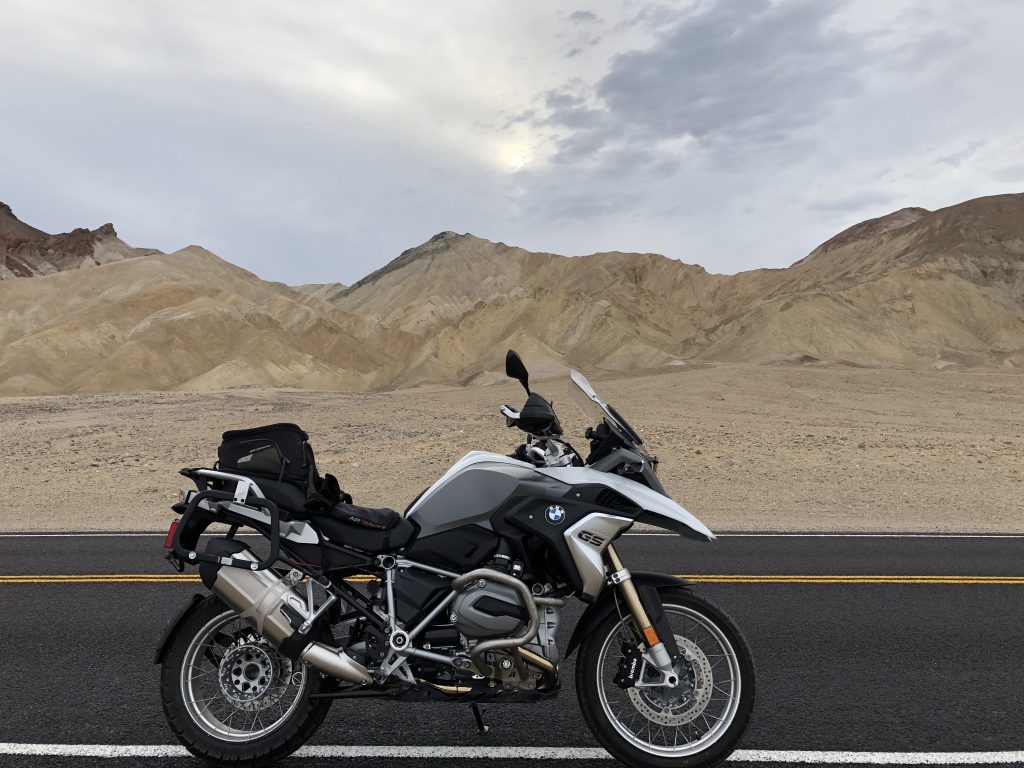 Our first diversion for the day was a winding loop road into a place called the Artist’s Palette. the colours in the rocks/hills were pastel and simply amazing.  The photos don’t do them justice but this is the best I could do. 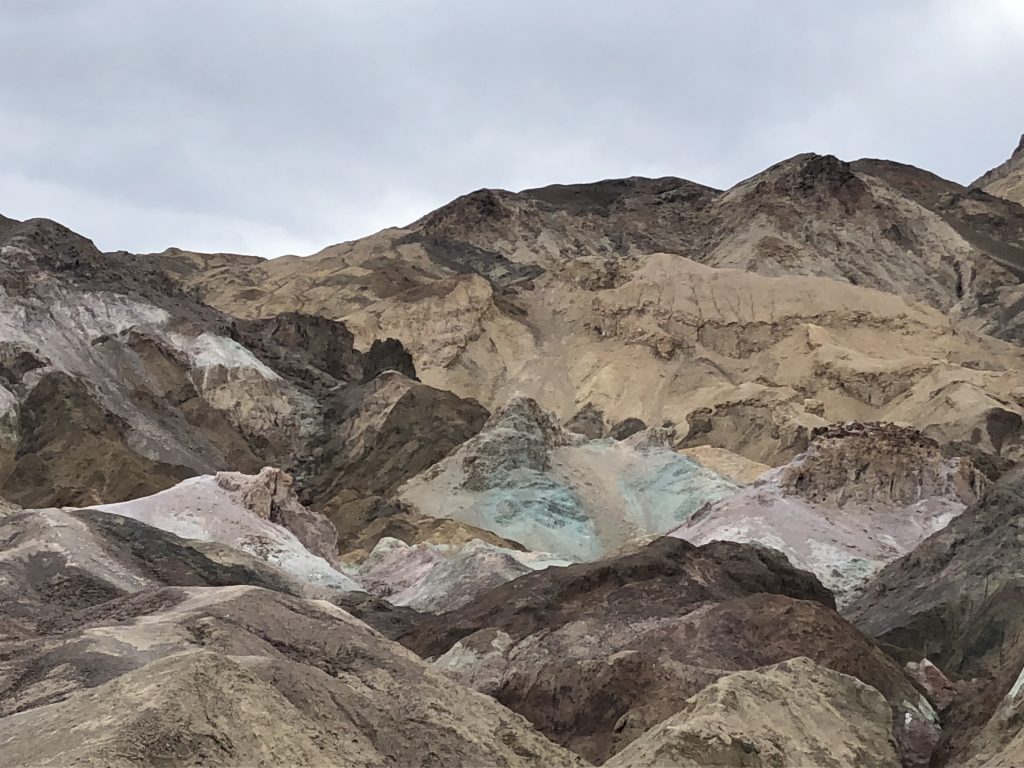 On the road in there however a driver apparently hadn’t done the twisty roads justice and beached his hire car which was pretty funny. The keys were left on the front wheel. Oops! I saw the car later in the day back at Furnace Creek on a tow truck. 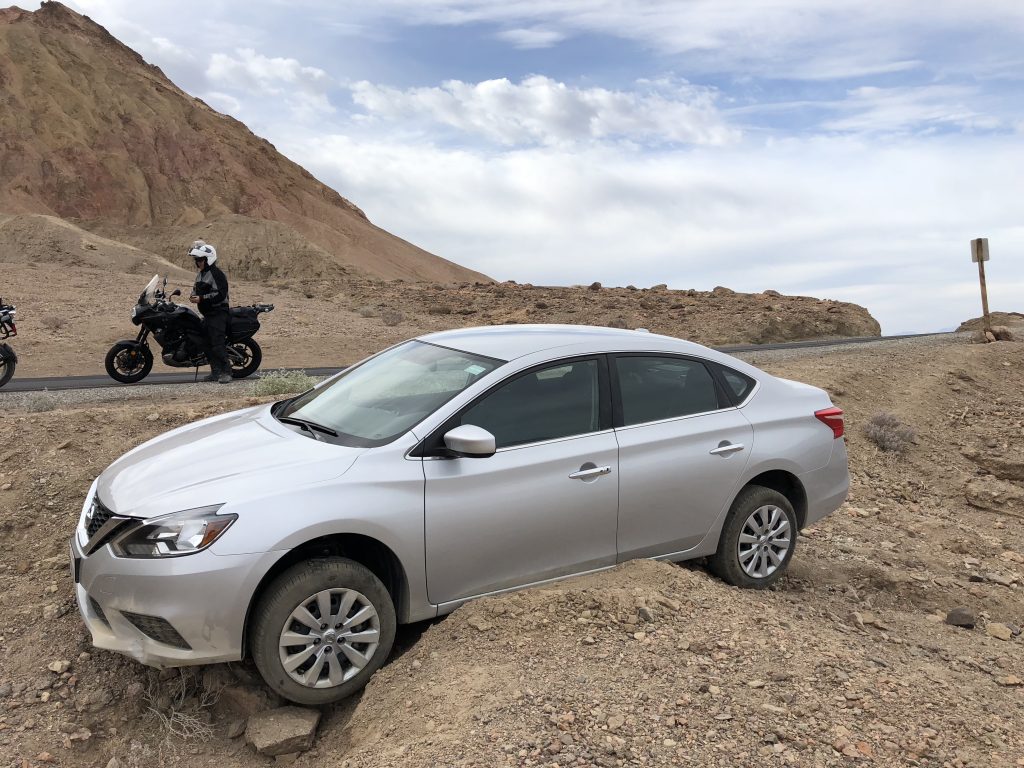 Out of the loop we were heading towards Badwater and I spied a dirt road, West Side Road, on the right heading towards the centre of the basin. I couldn’t resist so it was up on the pegs and off into the distance while Bruno caught up with the fact that I wasn’t behind him and pulled over to wait. It was nice to get the GS onto the dirt and give it a squirt. You can see that not much grows in death valley. 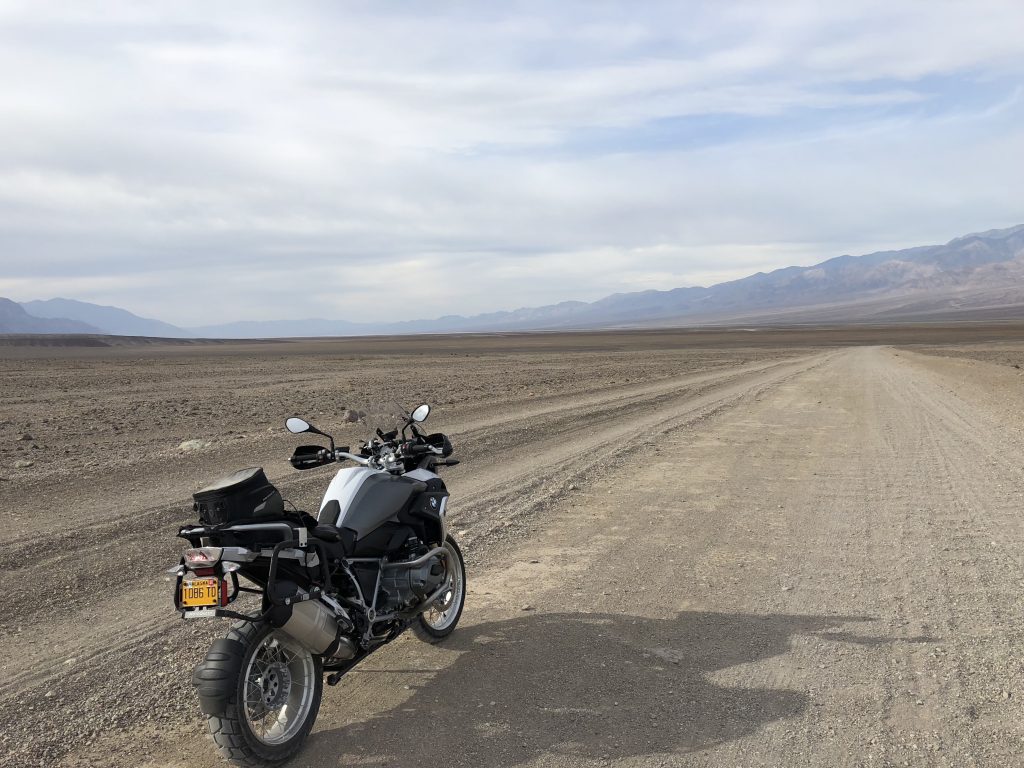 Back in line we then rode to the Badwater Basin, an endorheic basin 86 m below sea level. It’s the second lowest elevation in the western hemisphere. The water is bad but the Badwater Snails apparently like it. 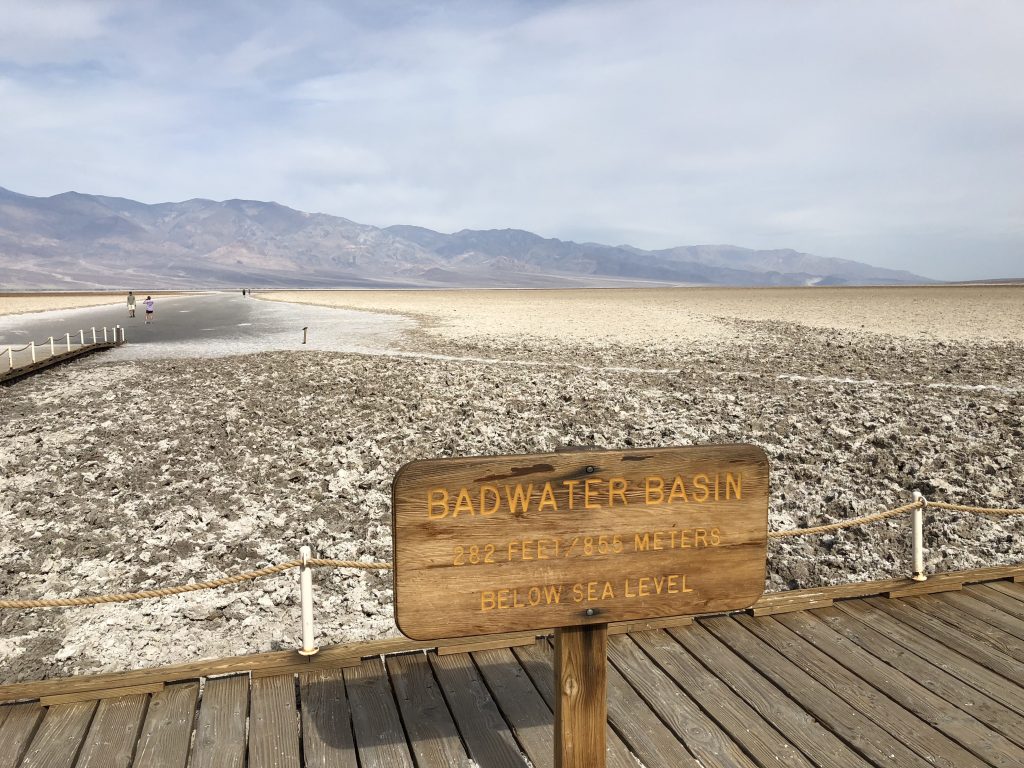 If you look hard below you can see the white sign half way up the hill that marks sea level. 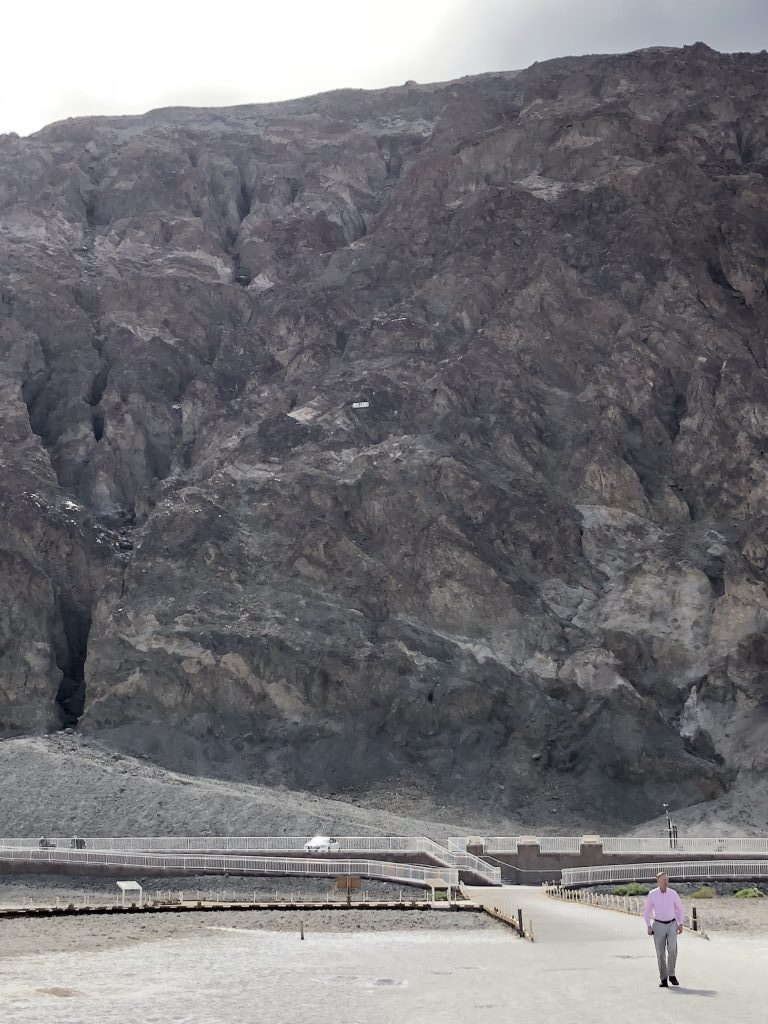 We continued riding through the valley through Ashford Junction to a little town called Shoshone where we fuelled up and took some time to tick off another small bucket list item. Eat pie in an old school diner. The Famous Crowbar Cafe Saloon was the venue. 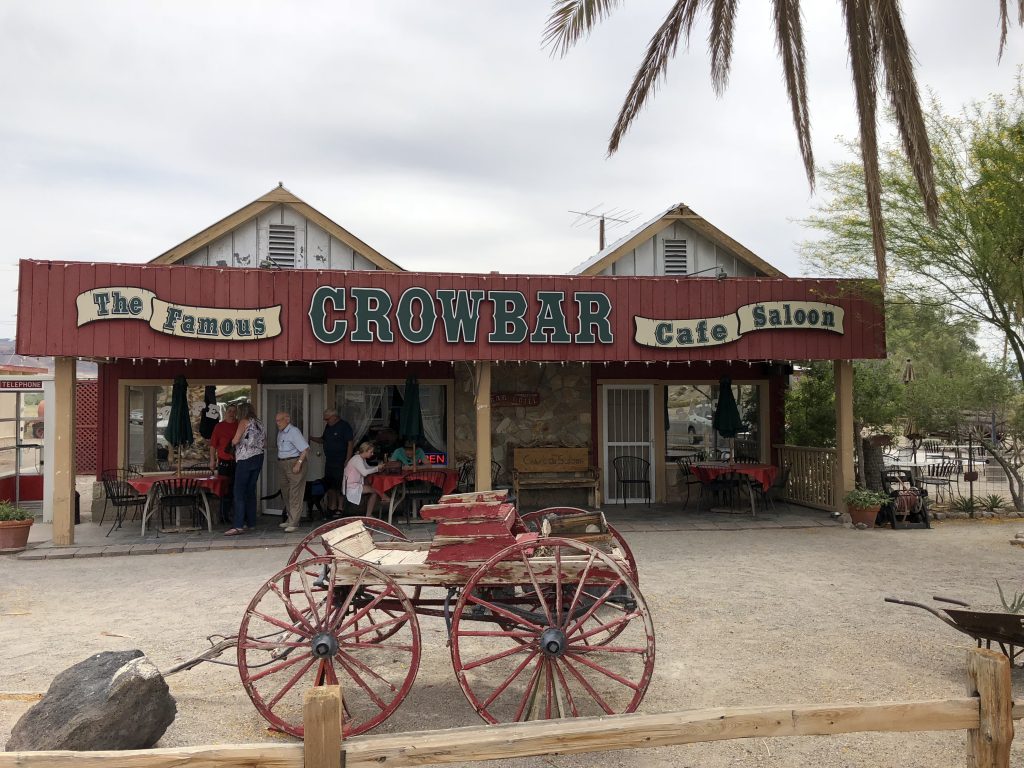 The apple pie was homemade and delicious and despite it only being 10.30am ice cream was a must. The interior, classic! 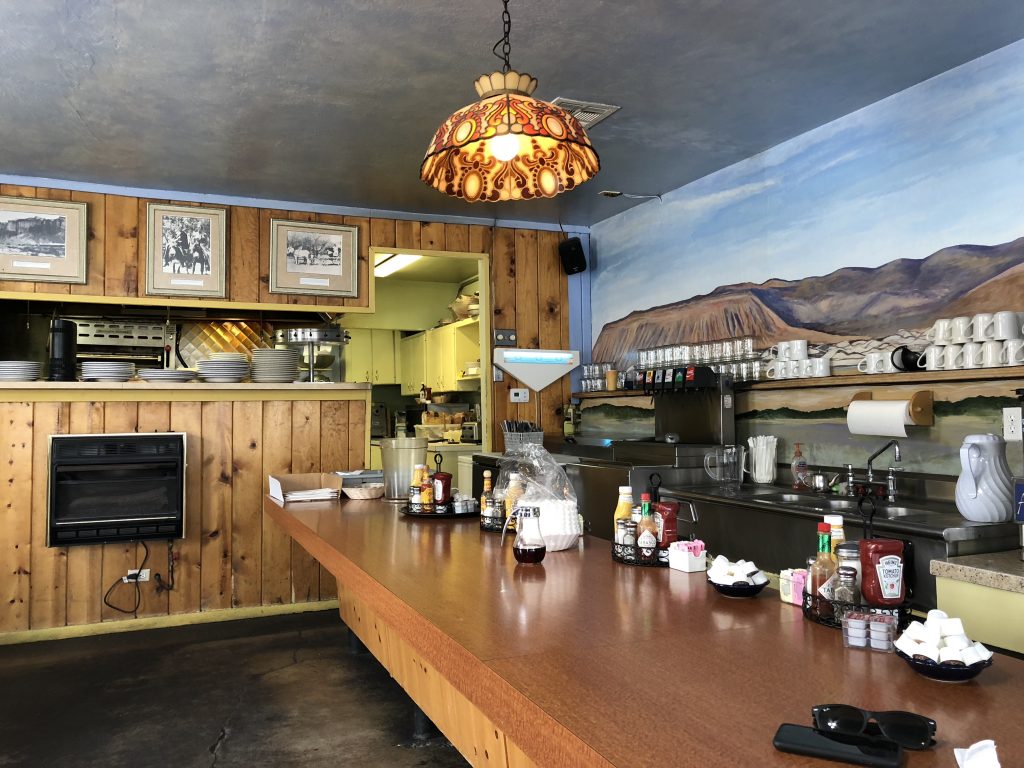 I was also surprised how close we were to Las Vegas 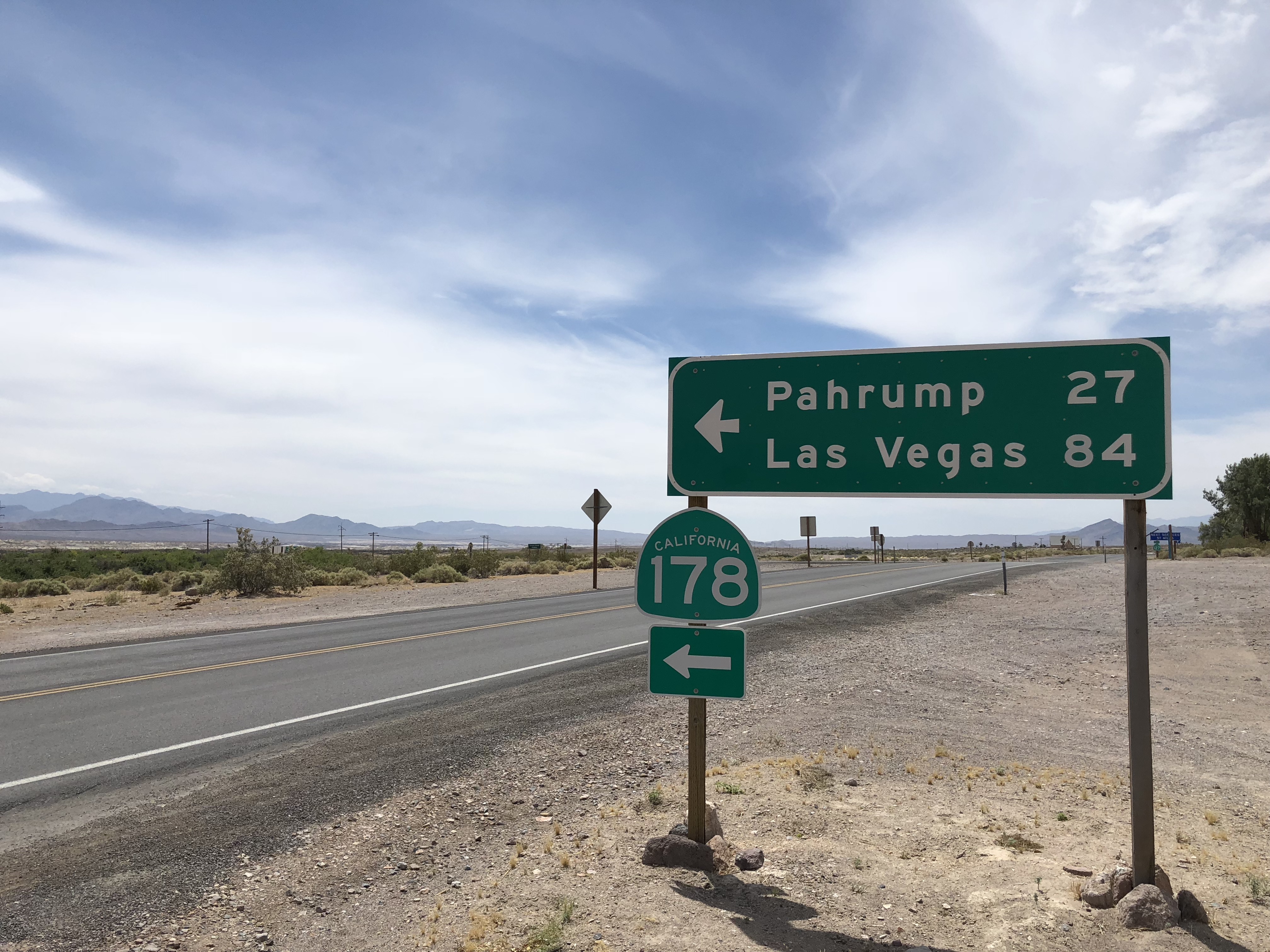 And after seeing chalk horses and men in the United Kingdom I was happy to see the US had their own version fo RV’s. 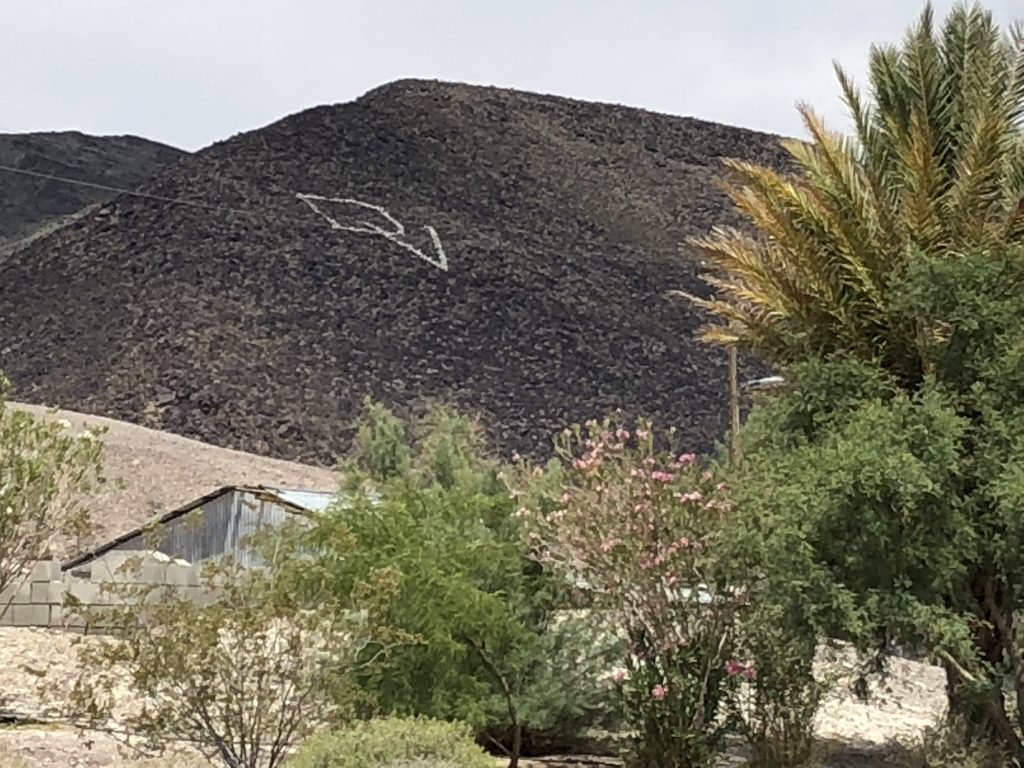 We left Shoshone for Death Valley Junction on the 127. Mountains just had a habit of popping up along there. It was also much cooler than in Death Valley itself and a beautiful day for riding. 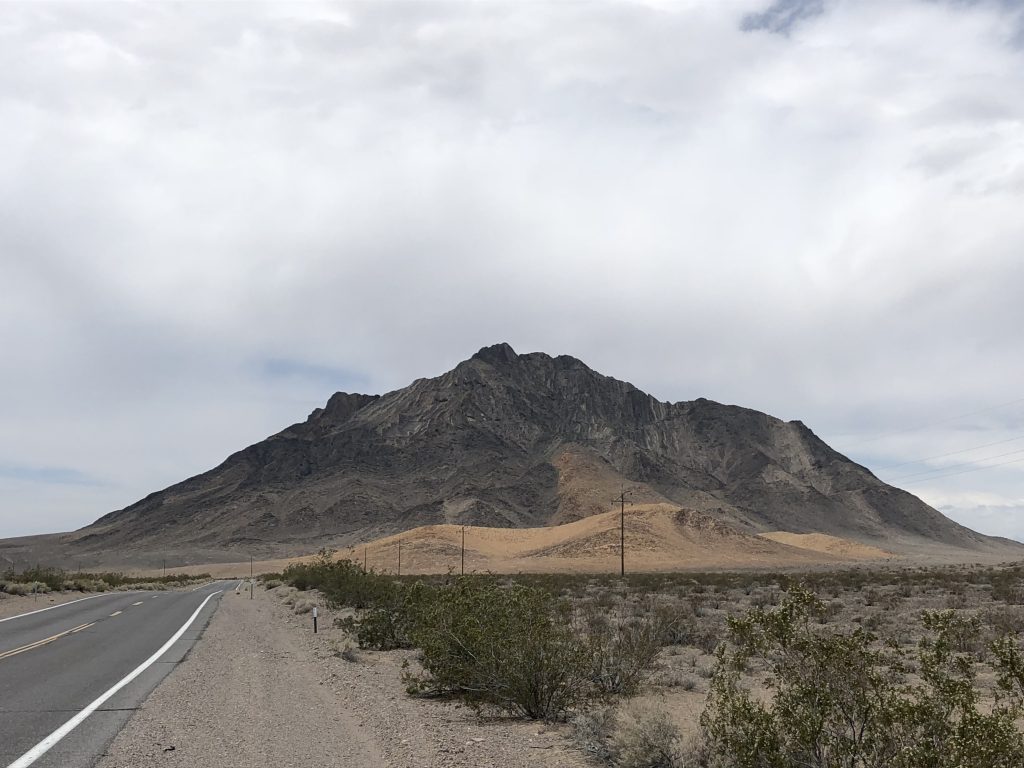 Death Valley Junction had a central square surrounded on three sides by white rendered buildings that ended in an interesting looking Opera House.  On the other end was a cafe that sold espresso coffee that used beans roasted in Australia no less. Bruno tried it and liked the coffee but was stunned at the price. 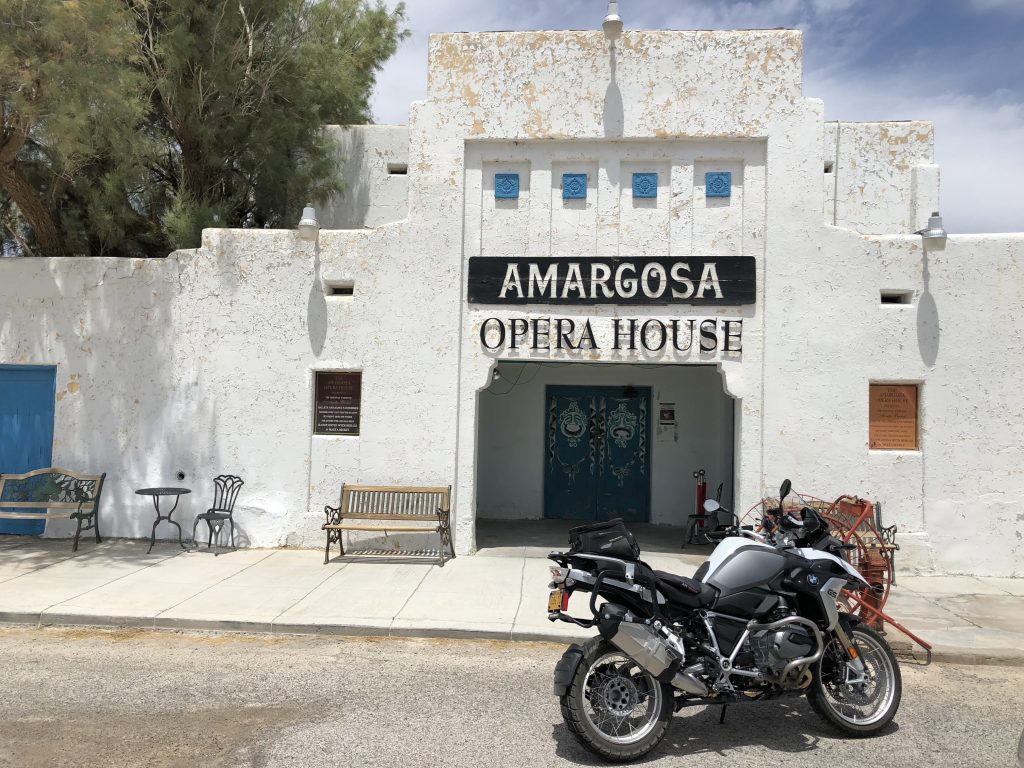 Not far from there I spied a Cannabis Farm offering tax free cannabis, which is legal in California.  I don’t know if Bruno wanted to stop. He slowed down to see what I might do but I was there to ride not to fly :-). We continued on the 190 turning left at Furnace Creek Wash Road to visit Dante’s View. Wow, the view over Death Valley from there was amazing. Looking right over Badwater. 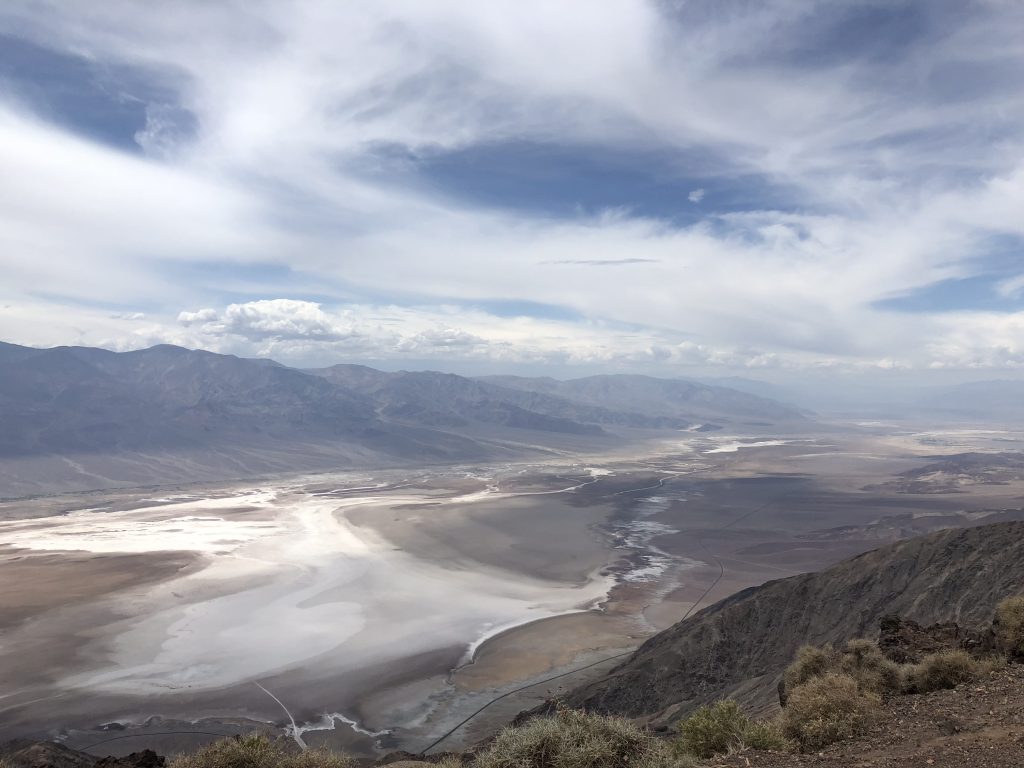 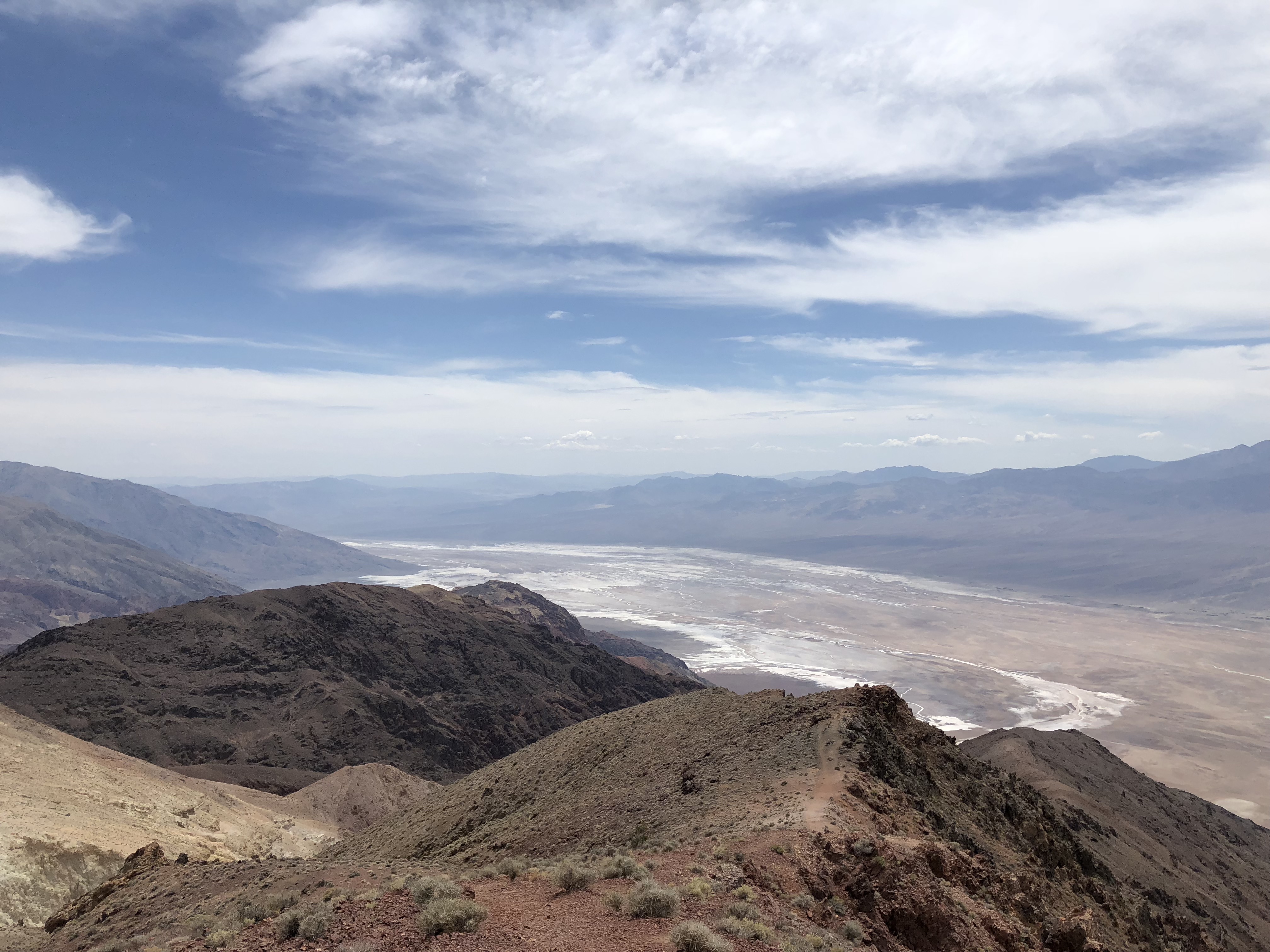 and a go at a panorama. Amazing! 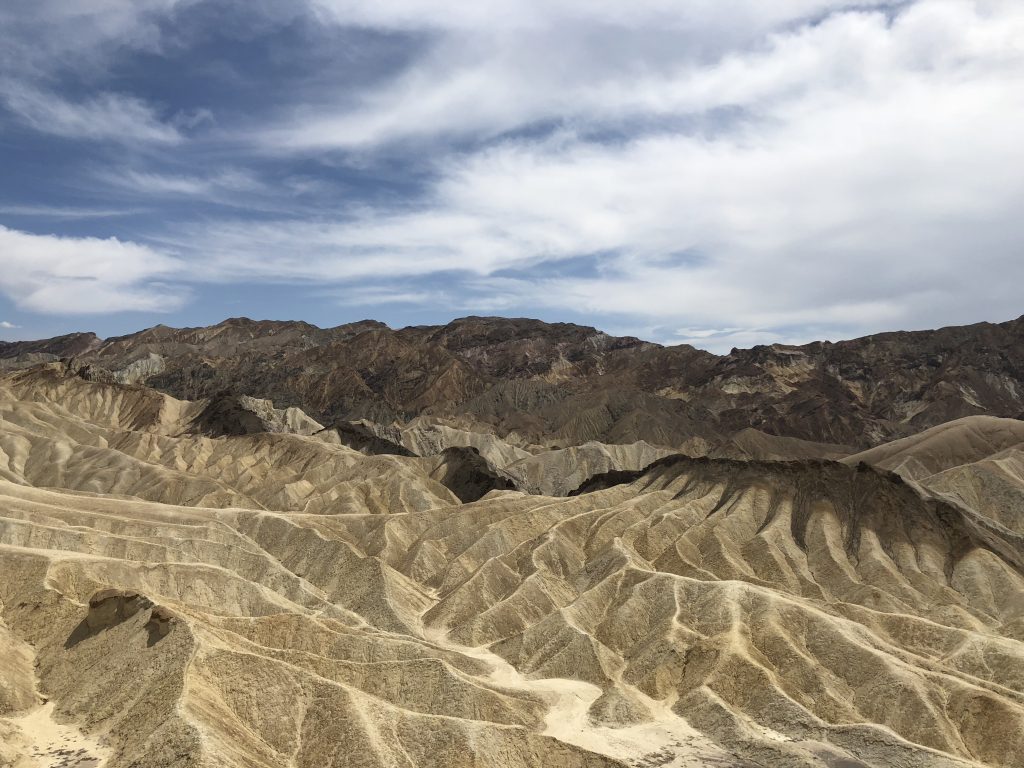 I’m still astounded by the range of colours and textures in Death Valley! 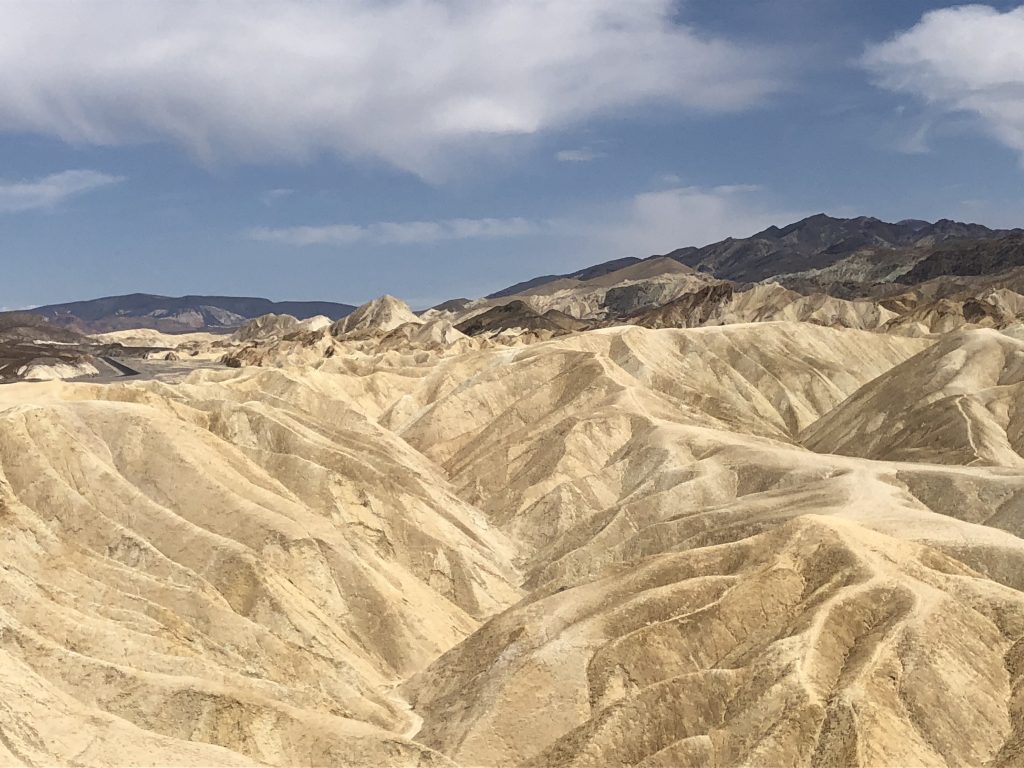 It was getting towards 3pm and it was really starting to heat up so it was time to return to Furnace Creek Resort and hit the pool before dinner. But a couple of quick stops on the way.  The first the Death Valley 49’ers gateway monument outside last night’s dinner venue (the Inn) 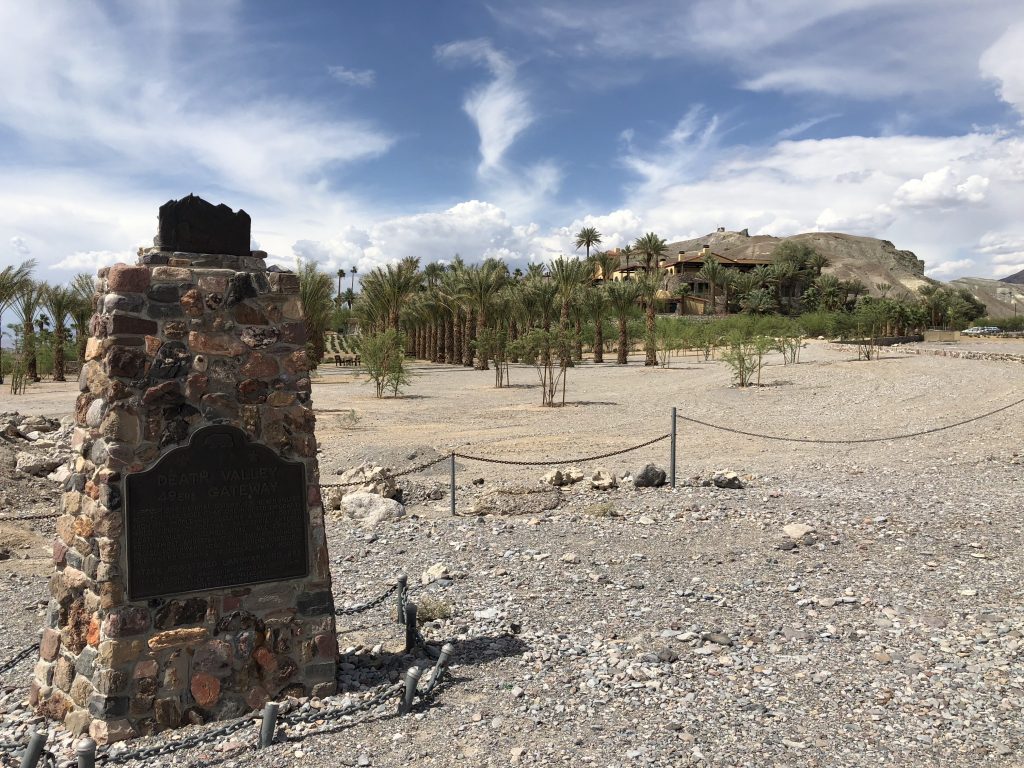 and then on to Harmony Borax Works kicked off in 1882. Definitely not a place I’d like to work. Here’s a pic of a 20 mule team “train” used to get the borax to market that weighed up to 36 tons including 4,500 litres of drinking water. 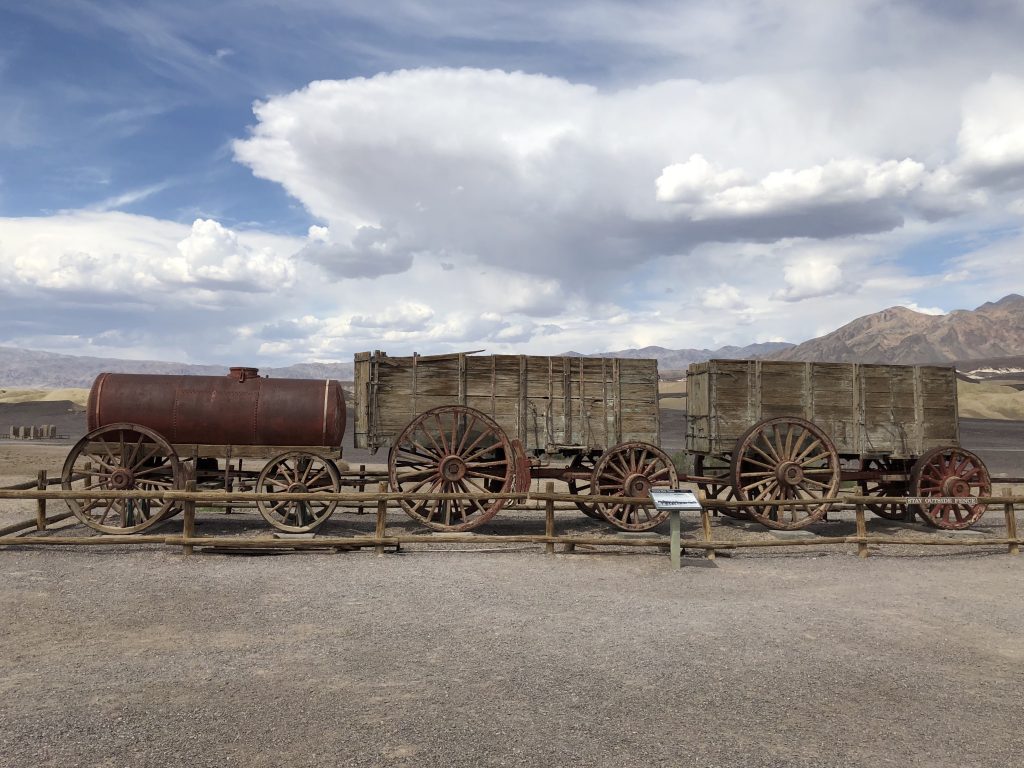 And a pic of the Borax works itself 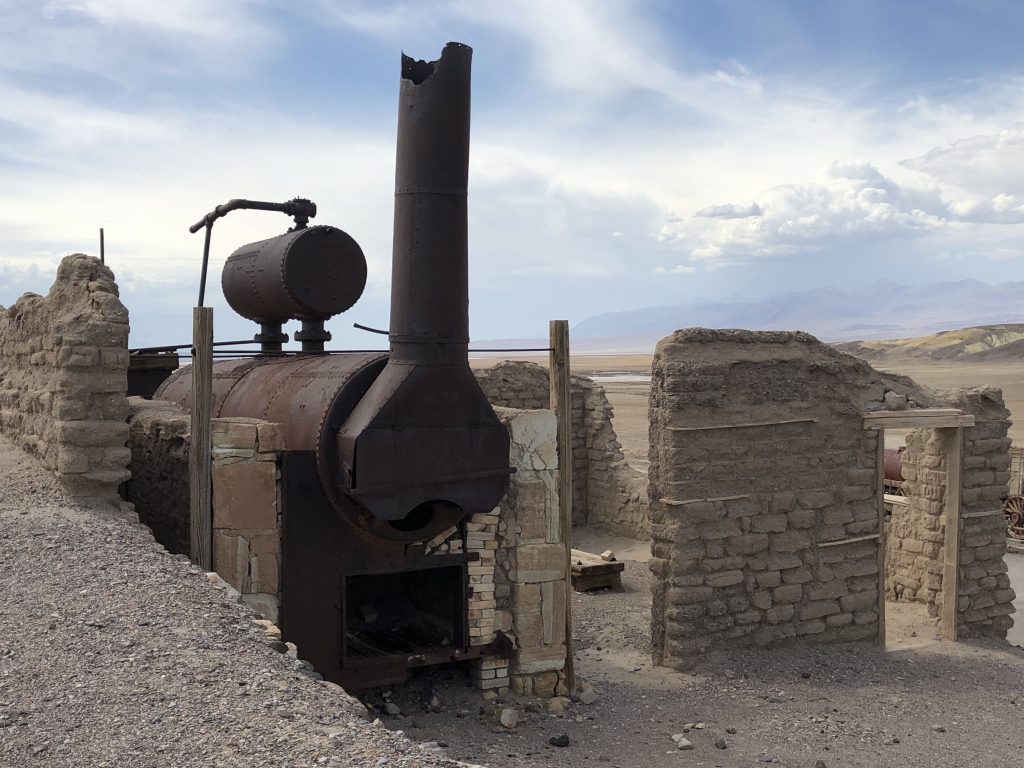 That done it was time to escape the 40+ degree heat and hit the pool. This was an incredible day riding around one of the most beautiful and harsh places I’ve ever been. Great job Bruno!

The next day was a heads down straight through run back to Long Beach where Bruno got a bit of a taste of how I usually ride (except for out lunch stop).  We took a moment to stop and take a photo of the Dunes near Stovepipe Wells 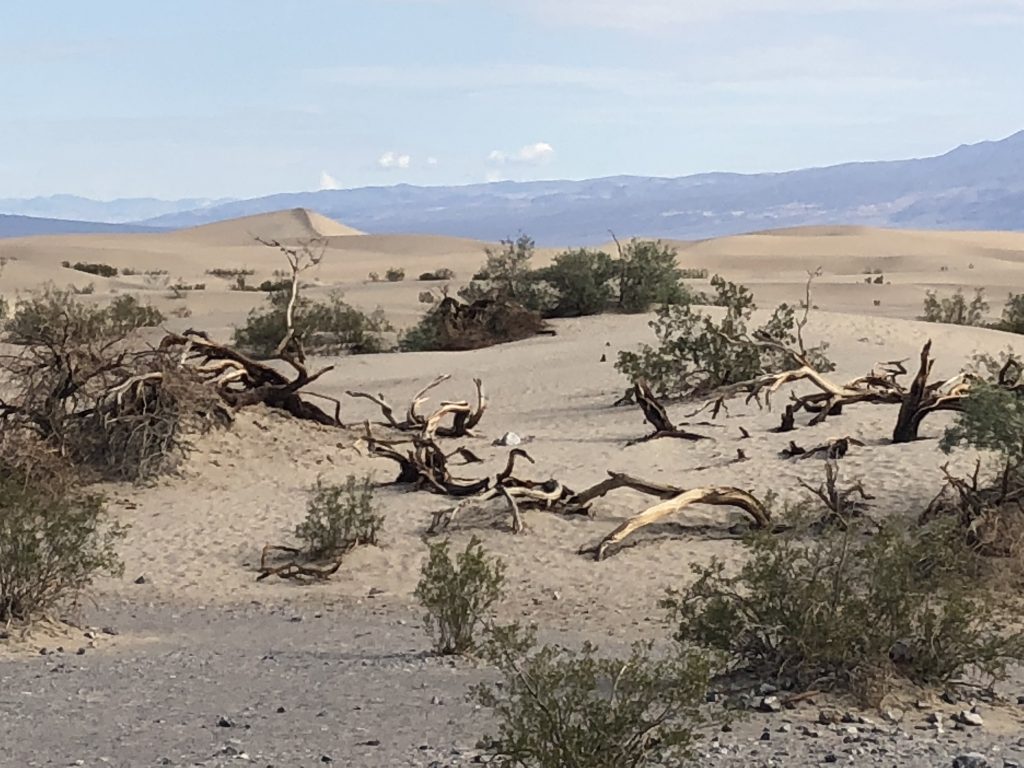 And an unusually brown coloured sealed road heading out of the valley. 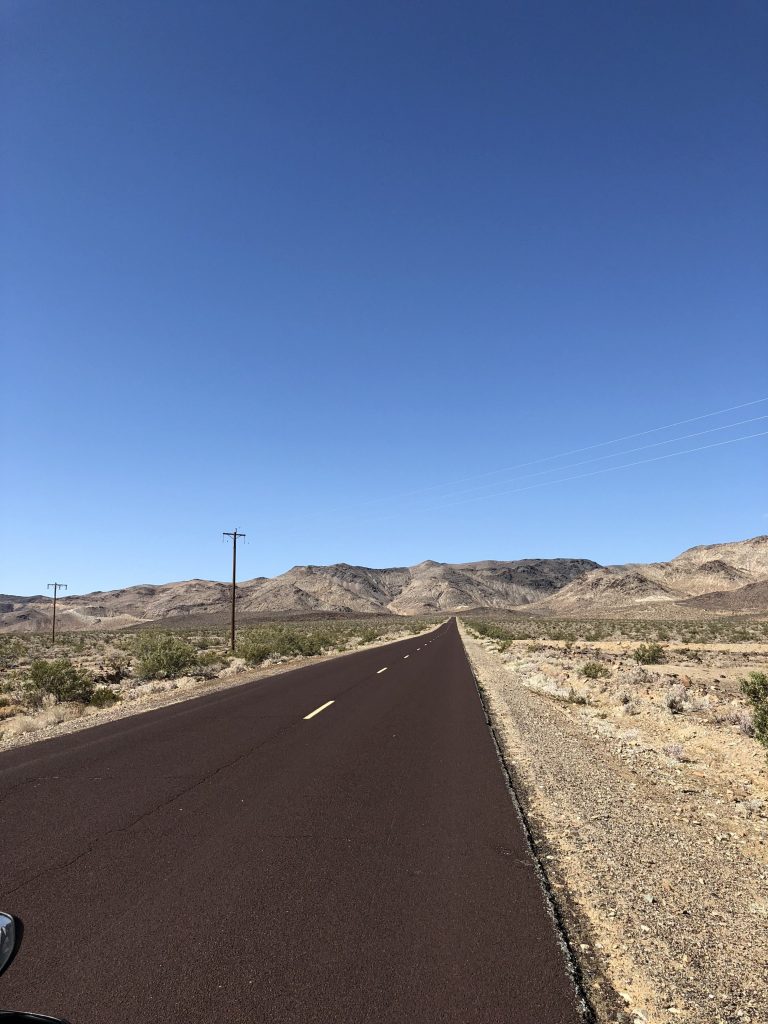 I was back in Long Beach about 3pm my head already getting into gear for the next part of the adventure.  Here’s a quick and dirty Spotwalla map of the 4 day ride. 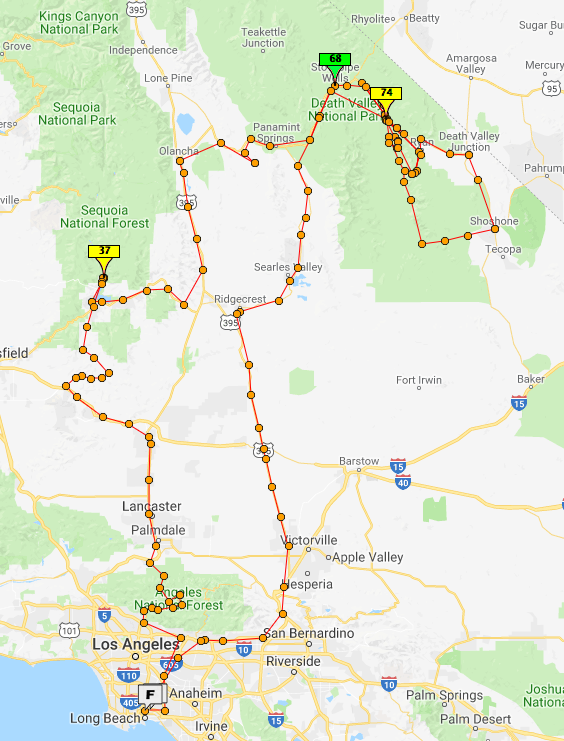 2 Replies to “A full day in Death Valley”