Today I picked up the hire bike, a BMW GS1200, from Motoquest in long beach and quickly bolted on my SPOT tracker and iPhone mount. I arrived prepared with a USB charger that plugged into BMW’s silly 12 volt outlet so I was set with my farkles. Mrs Wom had organised a tour guide, Bruno from Los Angeles Bikers LLC, who met me there and after a quick introduction and some paperwork we were riding onto one of the LA freeways. It was my first time riding on the “right” (wrong) side of the road, I have to admit to being a bit nervous. My mantra “Righty Tighty, Lefty Loosey” was front of mind and ready to be spoken out loud at every intersection.

We rode the I405 then the I605 to the I210 through Sierra Madre to La Cañada Flintridge. The interstates and freeways were a little daunting at first. The speed limits don’t seem to matter much in any lane. The further to the left the higher the speed but it’s perilous to expect that if you are doing ten percent above the speed limit cars won’t be passing you on both sides.   On the other hand drivers seem to be generally courteous and will move out of a lane to let you through despite the concept of keeping “right” not meaning a great deal. You can ride motorcycles in the far left lanes reserved for vehicles with two or more occupants and it wasn’t unusual to be riding at 80mph with traffic in this lane where the speed limit is 65 with lanes on your right going much slower.  Lane filtering is legal in California so when some gridlock occurs it was nice to see cars in the lanes either side make room for motorcycles to filter through, more courteous behaviour.  It certainly helped a lot having Bruno to follow to learn the ropes.

After that initiation to US traffic it was time to ride the Angeles Crest Highway which snakes upwards to an altitude of over 2100m in parts, higher than Australia’s Mt Kosciusko. The surface was great and the corners were awesome although we rode into some mist. First stop for a photo was a viewpoint with not too much to see looking into the valleys because of the mist. So the signs were it. 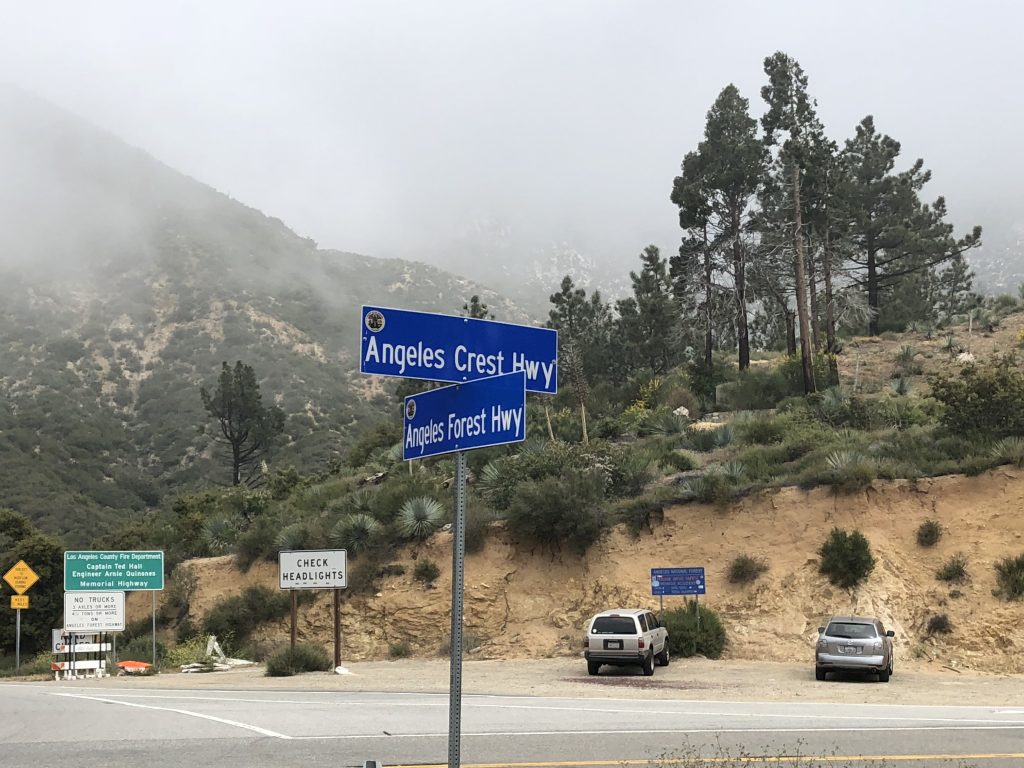 A little later through the views opened up and the scenery was amazing.  Nothing like that here in OZ. 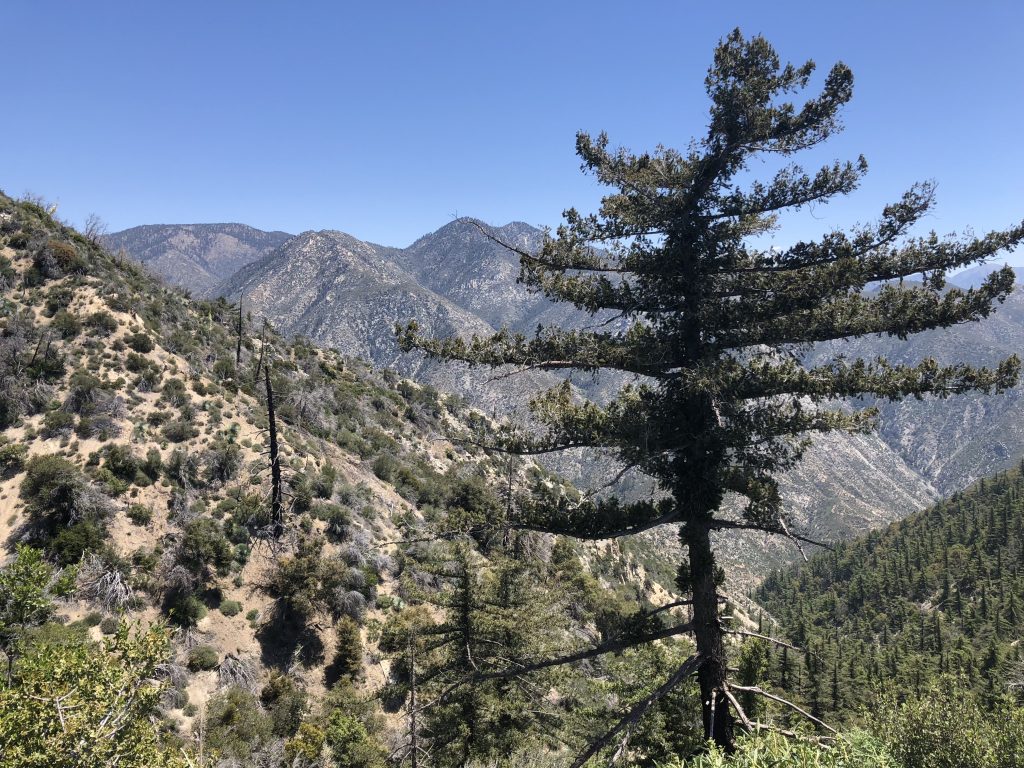 Then we rode to a biker hangout called Newcombs Ranch.  It had a lot in common with similar places around great riding roads in Australia. A wide variety of bikes (although a higher proportion of Harley-Davidsons), coffee, good food but this one had a bar too! Unfortunately they didn’t have any decaf and I wasn’t game to ask for a chai latte on soy, I’d have been 86’d. That’s Bruno in the pic, lucky for me he’s well known here so I managed to get a green tea on the house! There were  many more bikes behind me as I took this snap. 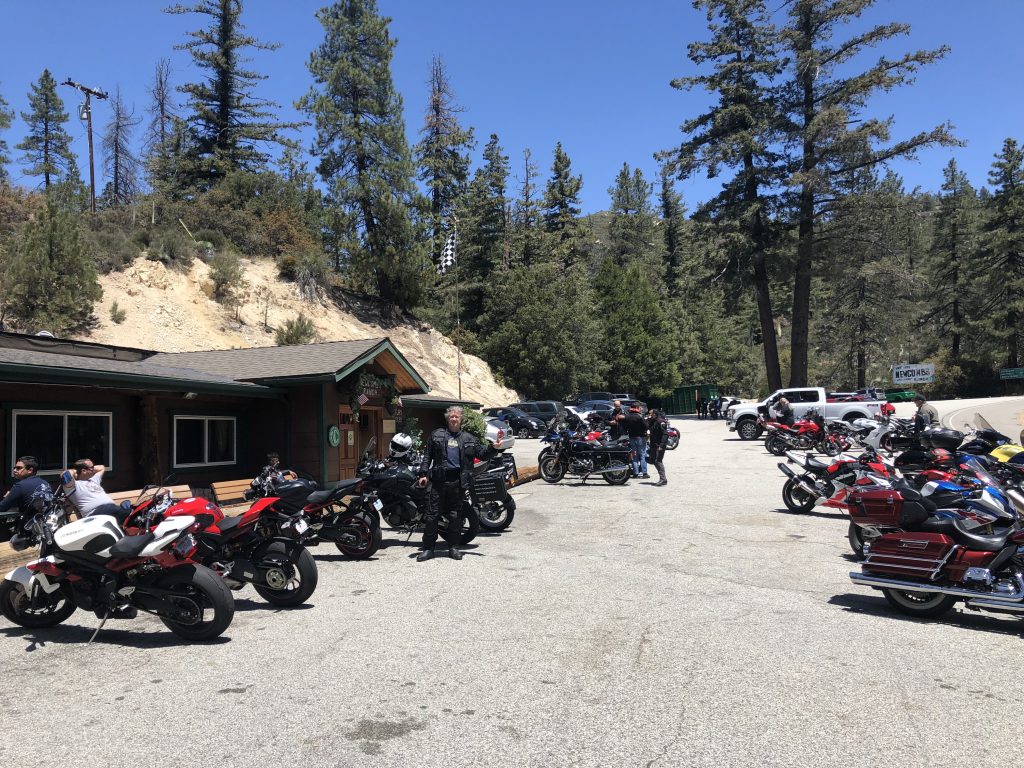 After Newcombs we went back the way we came and turned into Upper Big Tujunga Canyon Road for some different corners going down the mountains and then onto the Angeles Forest Hwy. We left the highway on the Aliso Canyon Road where the scenery flattened out a bit as we headed towards Palmdale. 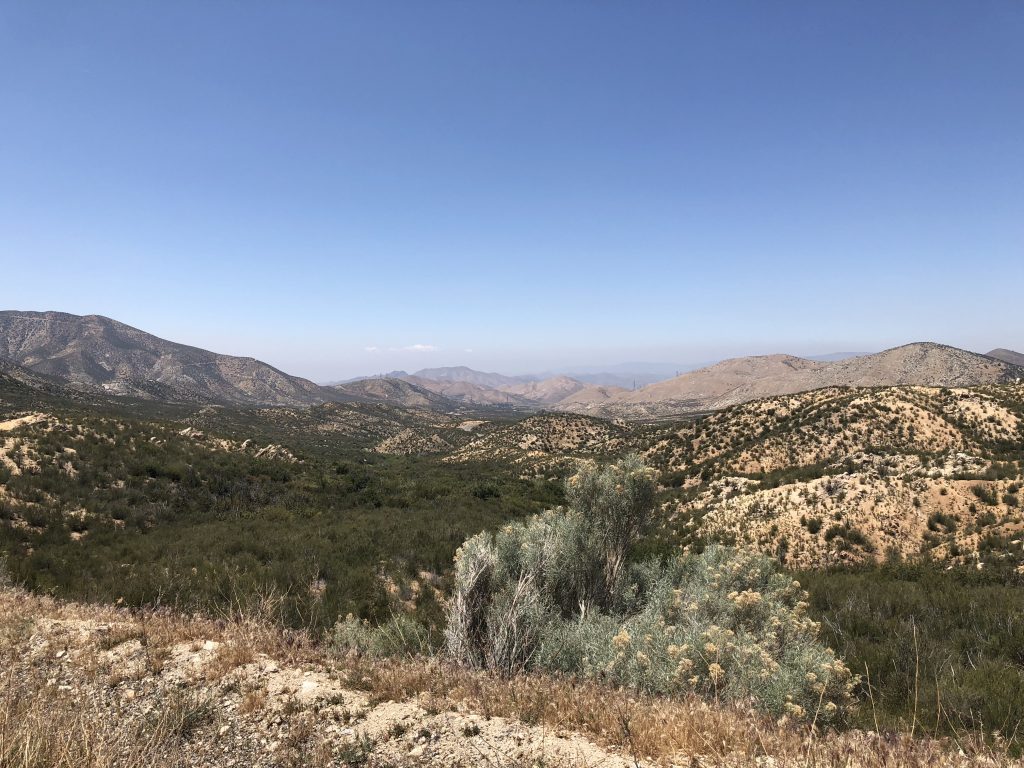 From there some more highway riding took us through Mojave.  We stopped there for fuel, it was a bit of a sad place made remarkable only by a huge forest of wind turbines filling the valley and covering the mountains. I’m kicking myself for not taking a photo of them, I’ve never seen anything like it!

We took Hwy 58 towards Bakersfield but turned off onto Caliente Creek Road, following on to the Walker Basin Road. This area seemed remote, the road narrower with gravel shoulders through soft soiled hills that seemed to deposit dirt on the tar regularly. The ranches were unfenced so cattle on and beside the road were common so taking it easy around corners was a good idea. 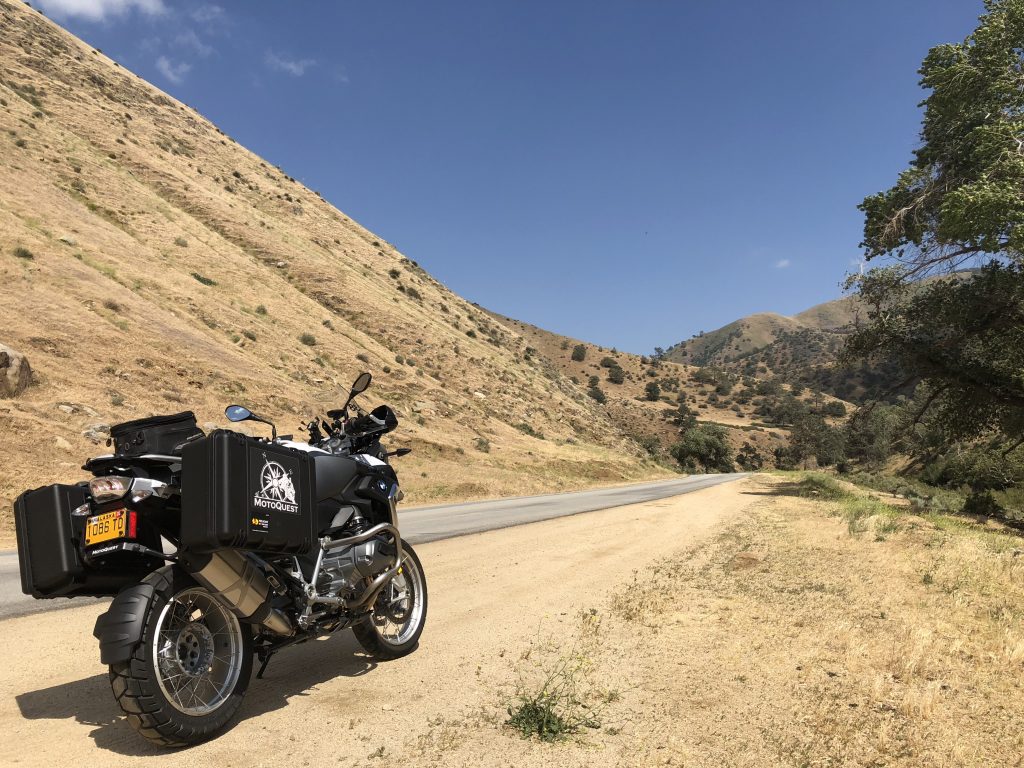 In this area there were lots of abandoned, decaying buildings.  There were also some that looked like they should be disused but were obviously lived in.  It was common to see “Make America Great Again” signs and flags on fences and mailboxes as well as other items from the long gone presidential election. It would seem the people around here backed the winner.  There were a few small, ruinous towns along here that frankly I wouldn’t have been too keen to stop in because they reminded me of particular towns in remote areas of Australia. I did wonder at the number of them though. 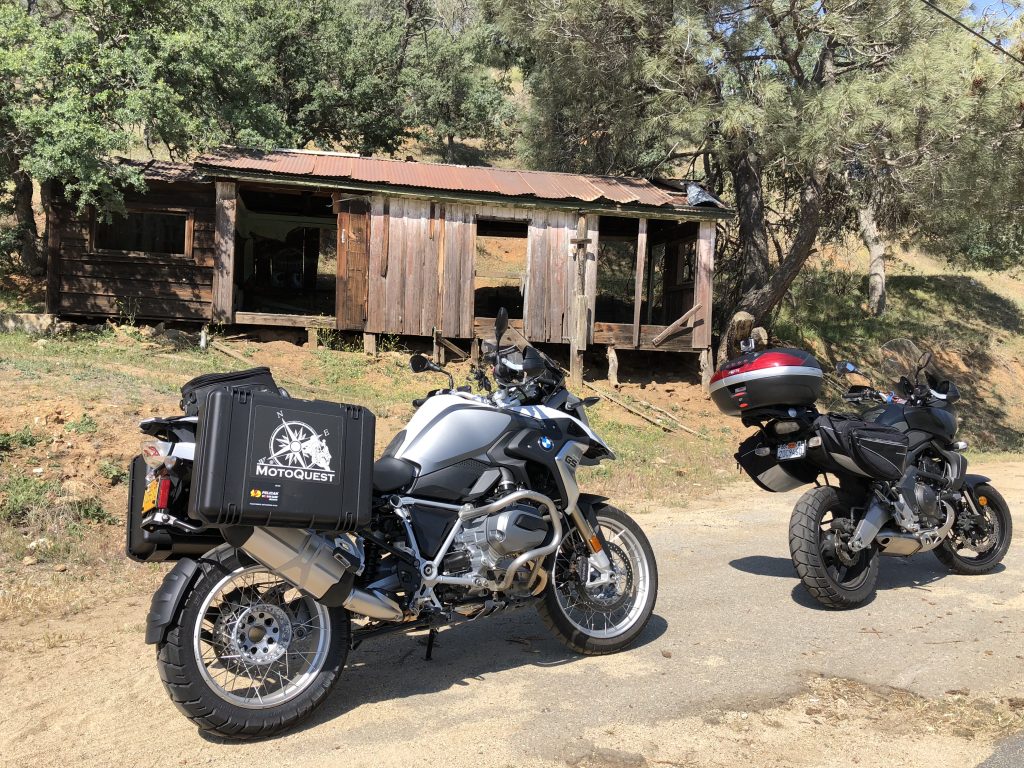 We then turned righty tighty onto the Caliente-Bodfish Road. From up on the hill at Bodfish you could see Isabella Lake in the distance. Given we were heading that way there were clearly some downhill corners coming up!

We reached Lake Isabella and grabbed a quick snap.

The next stop was the Piazza Pine Cone Inn at Kernville which was our hotel for the night.  We were greeted by Kylie who on hearing my Aussie accent ran around the desk and gave me a big hug. Kylie’s an expat who’s been living in the US for some 18 years and we had a lovely chat about what’s happening at home. 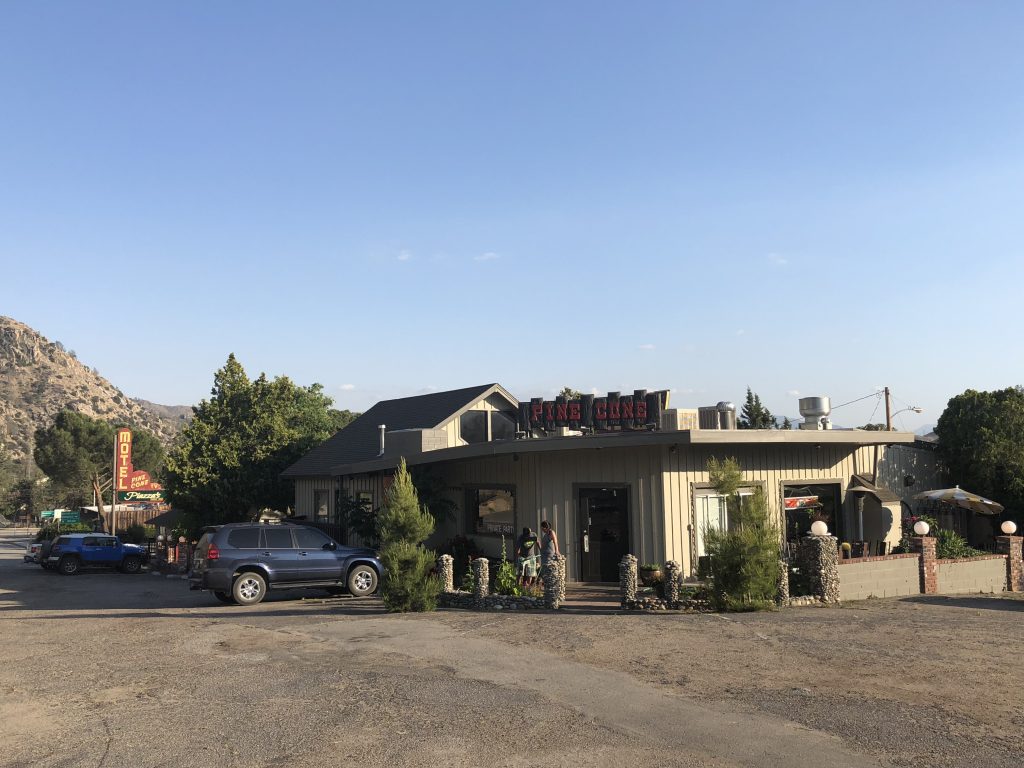 After checking in I wandered up to the local supermarket, bypassing the gun and ammo store, and grabbed a snacks, water and supplies for the next day’s ride.  Kylie had given the Kern River Brewery a big wrap so I stopped in there on the way back to the Pine Cone. 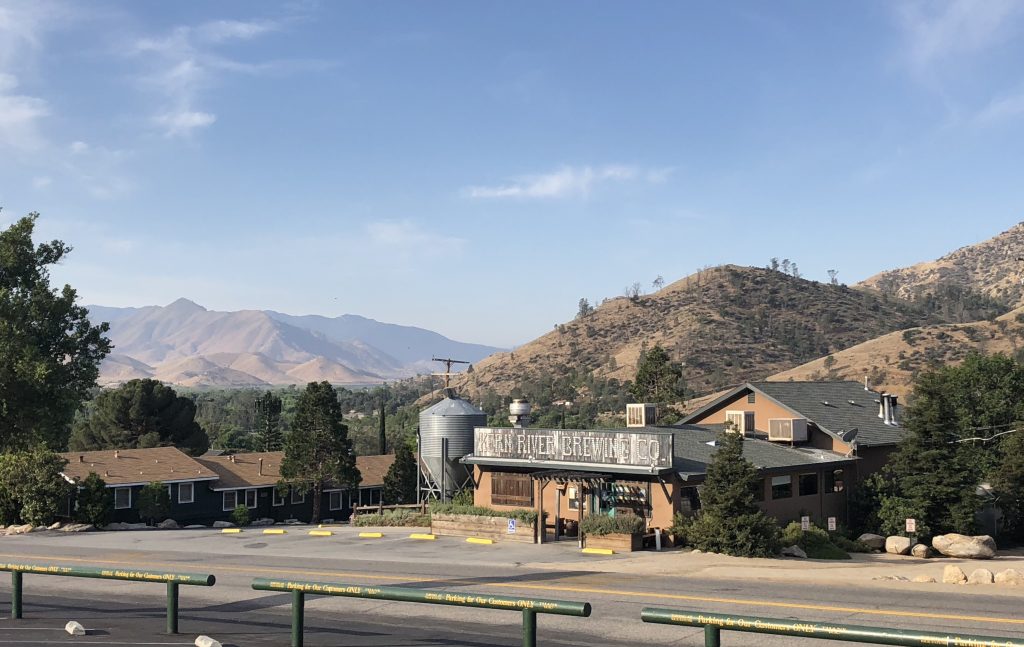 I tried one of their local Eddy Flower Triple IPA’s that they would only serve in a smaller glass called a tulip because it was 11.6%! Phew it was good but I only needed one before heading back to the hotel to get changed for dinner. Bruno and I walked back to the “Brewpub” for dinner and tried their tasting tray of beers. My fave was the Class V Stout NITRO “not for the timid”. It certainly helped me sleep and make some jet lag adjustments.

One Reply to “Long Beach to Kernville CA.”