It rained for a while early in the morning as we prepared to leave Pikes Lodge in Fairbanks. 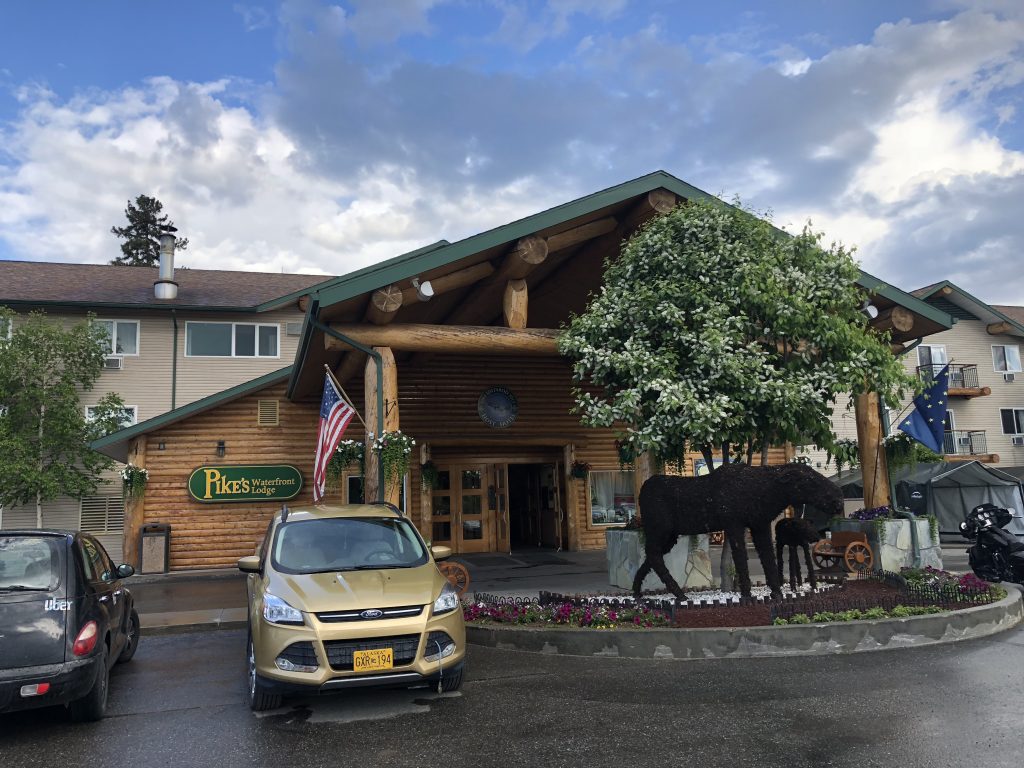 After the huge meal last night I decided to just have some oats. I inadvertently learned a quick way to save money, cereal only from the buffet is $4.00 and it’s not advertised. Add anything else, e.g. a slice of toast, it’s $14. My breakfast partner wasn’t too happy being charged $10 for a slice of toast but to be fair he could have gone back for more.

Anyhow, moving on. The first stop was only a few miles out of Fairbanks, the Aleyeska Pipeline Viewing point. 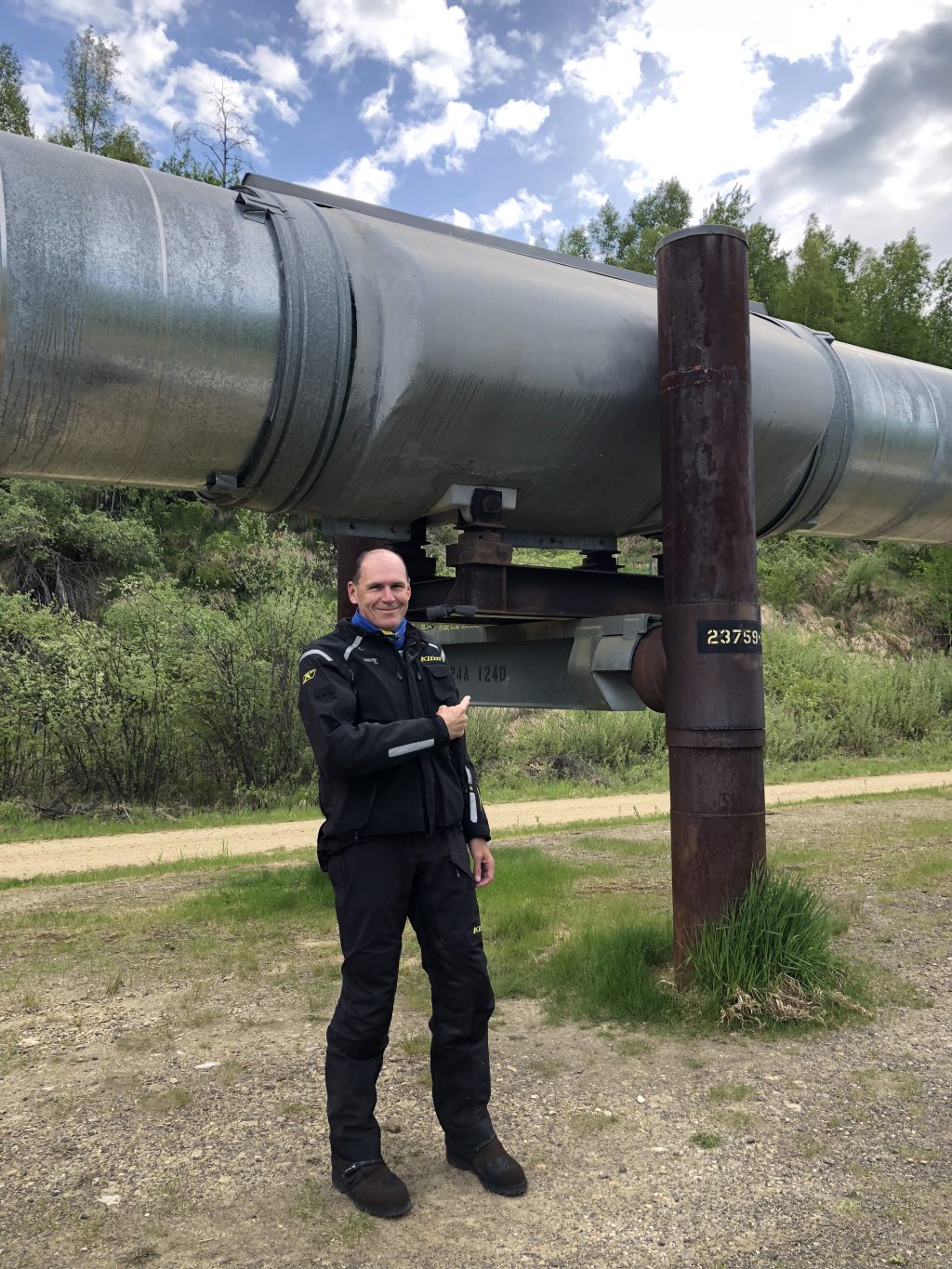 It was an interesting stop with some info about the pipeline, which carries oil from Prudhoe Bay to Valdez. We were warned that it’s not looked on kindly to touch or hang around the pipeline anywhere else than here. The pipeline was to be a constant companion heading north. 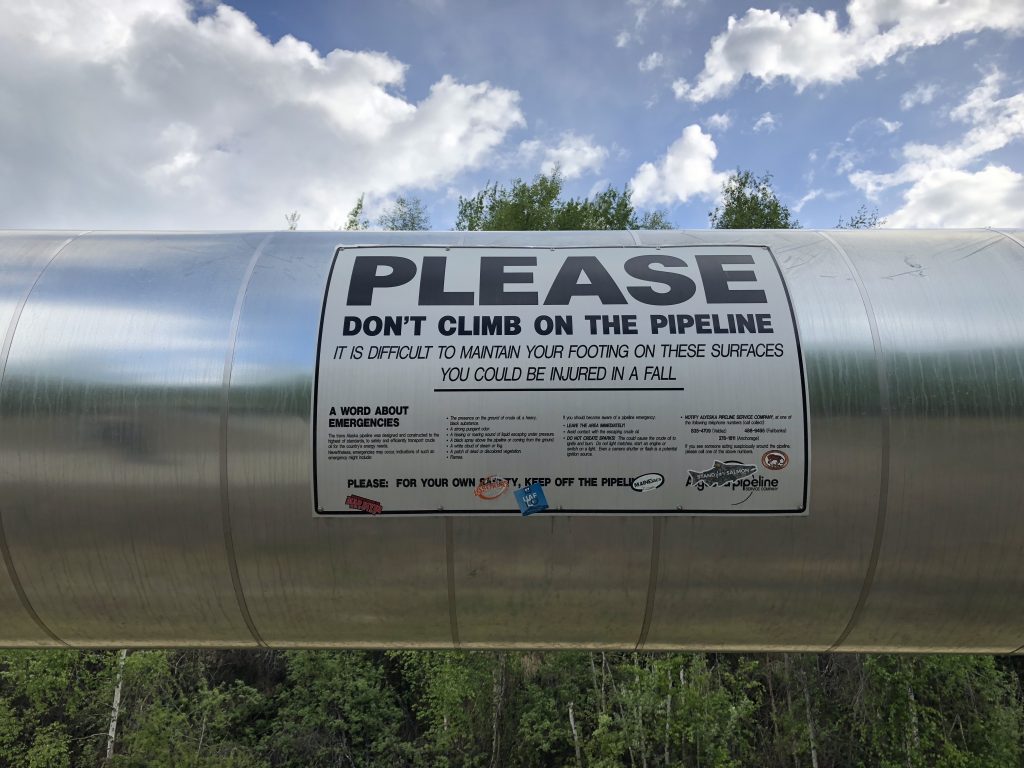 That done we continued on the Elliott Hwy where there were still some signs of civilisation although not open at the time. 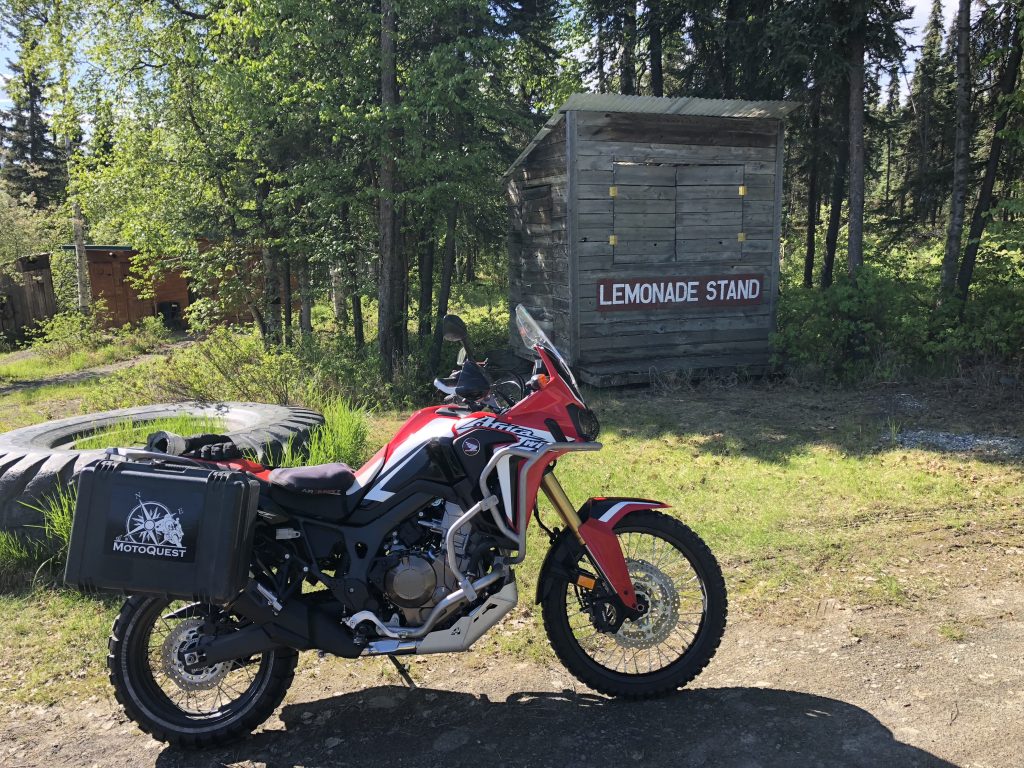 Then we were all excited to get to the main event, the Dalton Highway. Rob and I stopped at the old sign 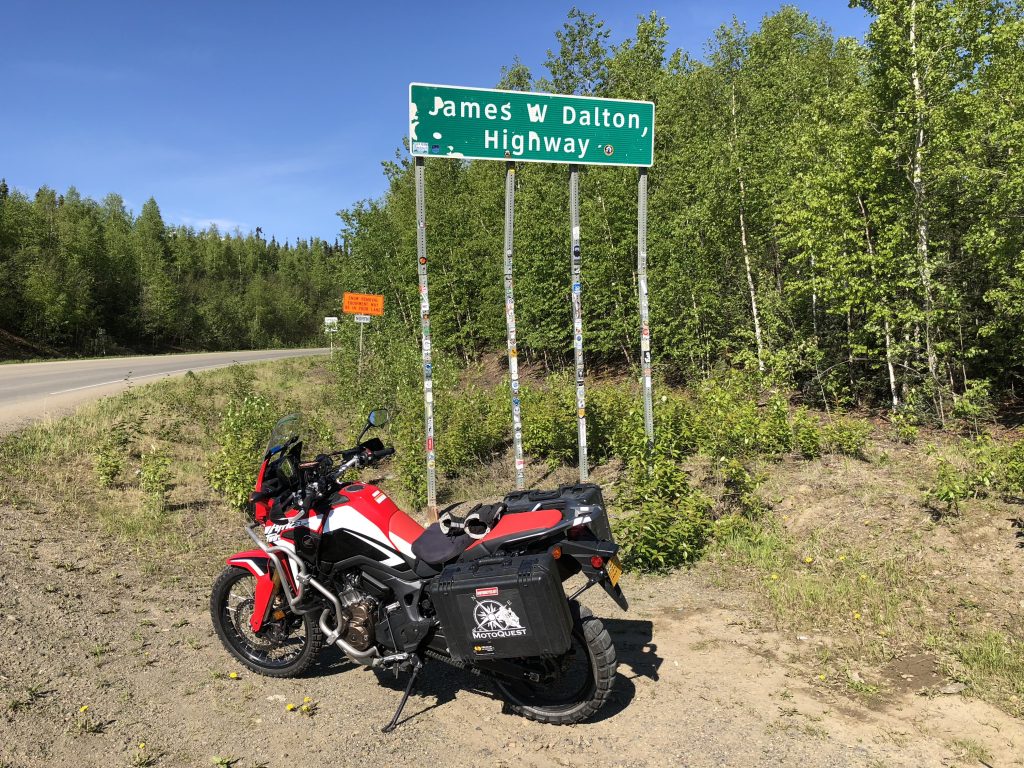 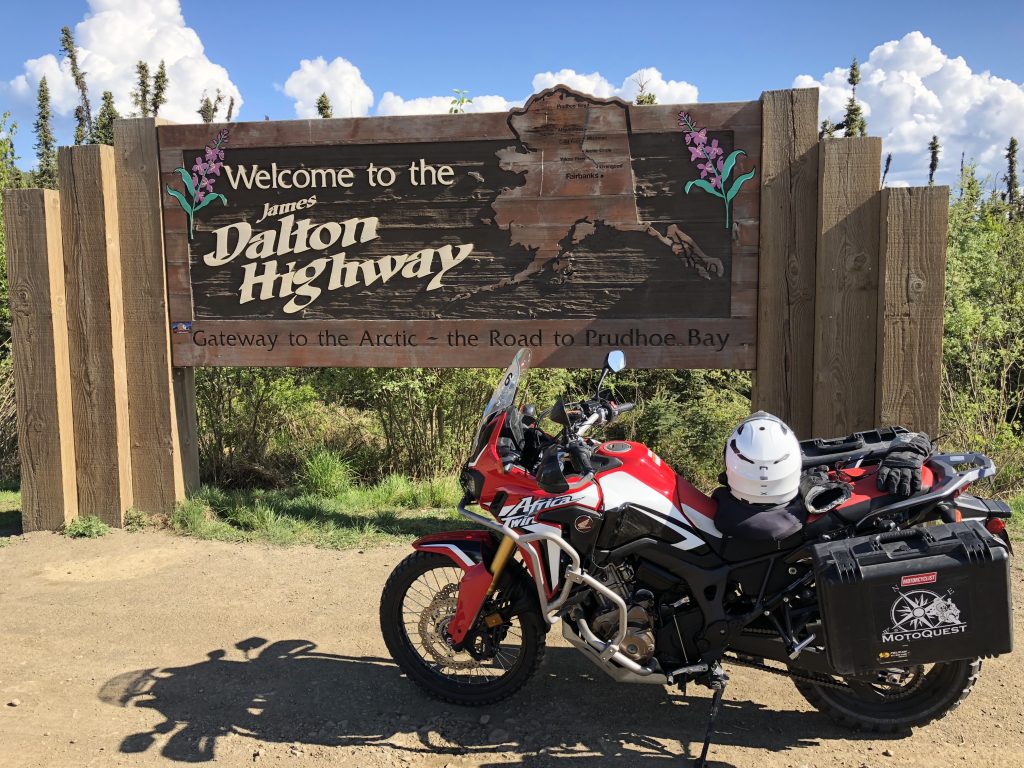 and then we found ourselves on glorious gravel.  Not that the surface was particularly glorious but we’d come to ride the dirt and it was great to be on it.  Rob and I were out front and not too long after leaving the sign an 800GS shot past me like a thing that shoots past you. We turned the wick up a bit to stay in touch with the rider who turned out to be Dan, the guide. That stretch was just great fun.

We stopped at the start of the Yukon River Bridge. You aren’t allowed to stop on it or walk on it. We were told there’s a PA system on the bridge an if you do you’ll get yelled at. I didn’t test it out but we did take some pics while we waited for others to arrive. 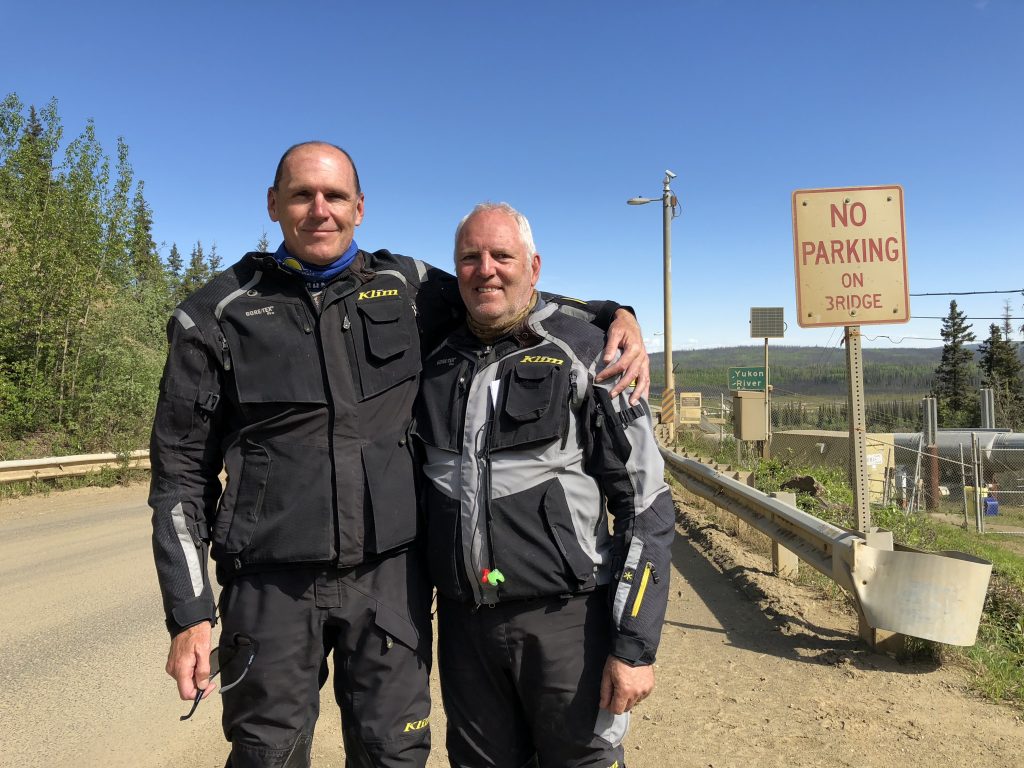 Fuelling up at Yukon River Camp was interesting. We had to hand our credit card over at the counter, 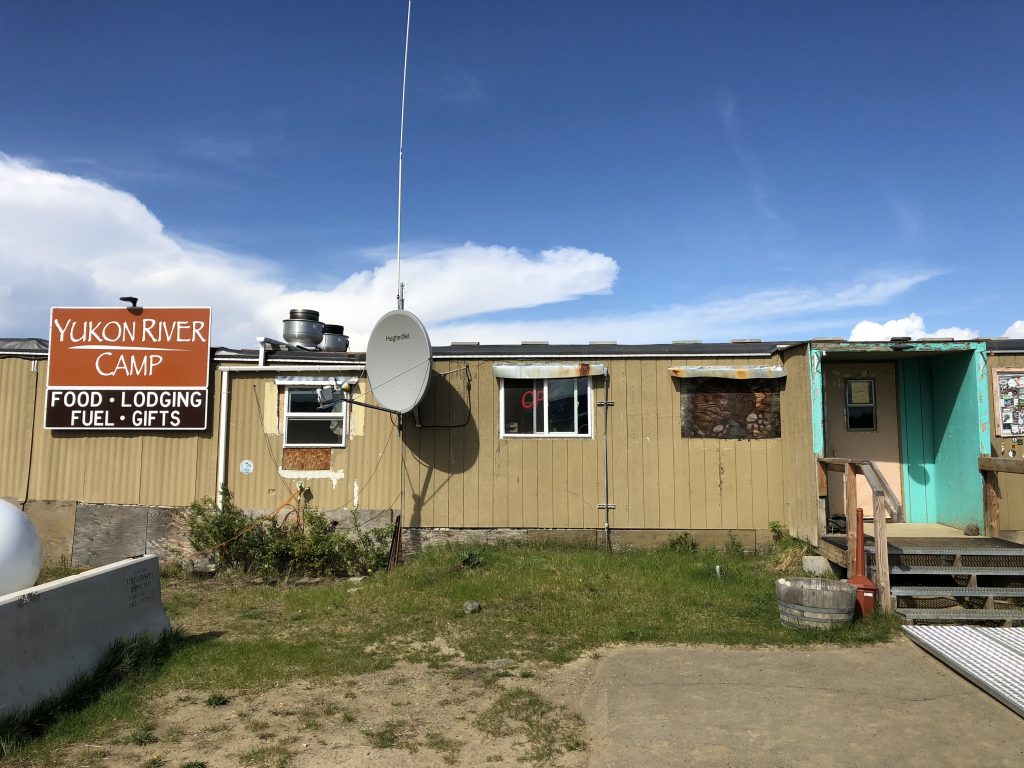 ride the 80 metres or so to the pump and line up. 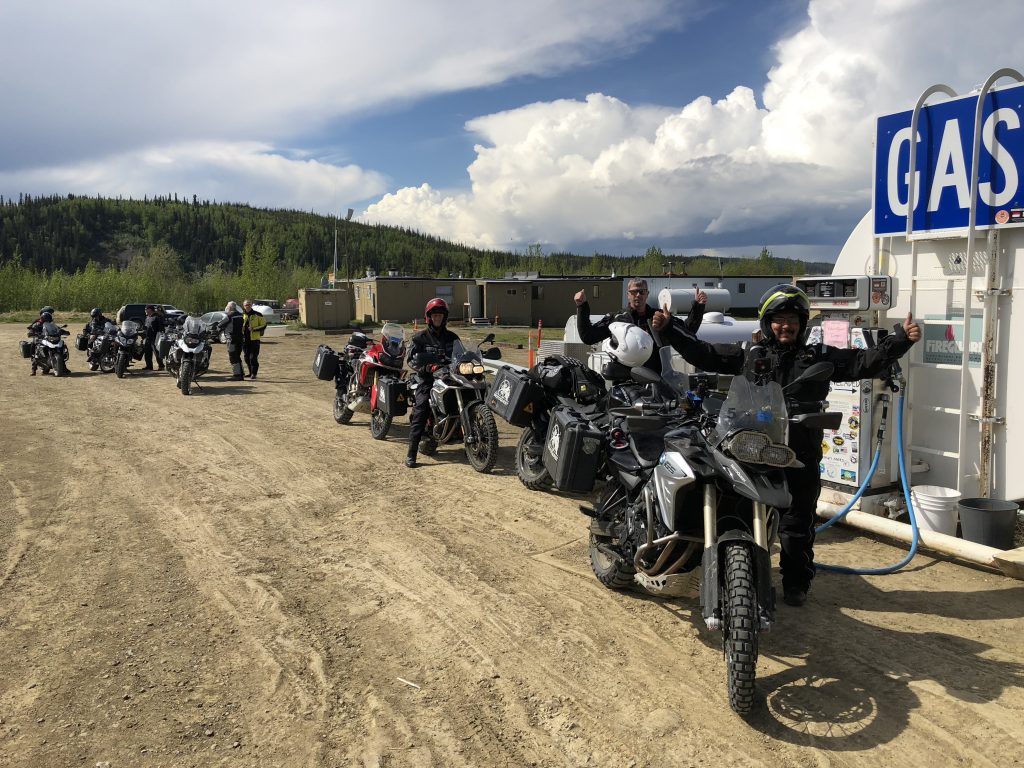 Once it was your turn you filled your bike up, took a photo of the pump amount/gallons and the rode back to the main building to produce the photo and pay. You wouldn’t want to be in a hurry! This was for Rob and I btw, that did save some time but the fuel was pricey. 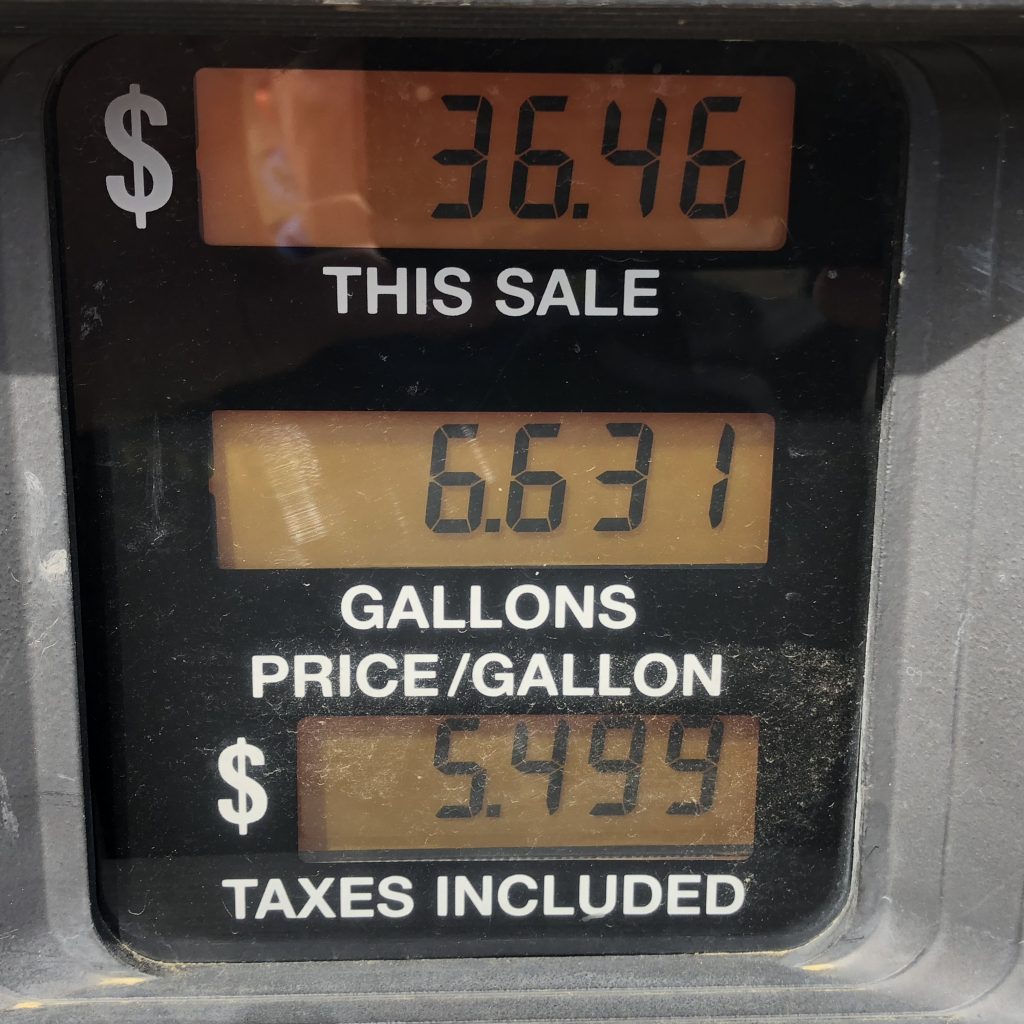 The food there was pretty good though. Big sandwiches on turkish bread or bowls of noodle soup that came with a choice of protein and condiments.  It was a long stop but a nice time to relax and chat with the others.

The remoteness of the area was now apparent and they’d even run out of things to call stuff. 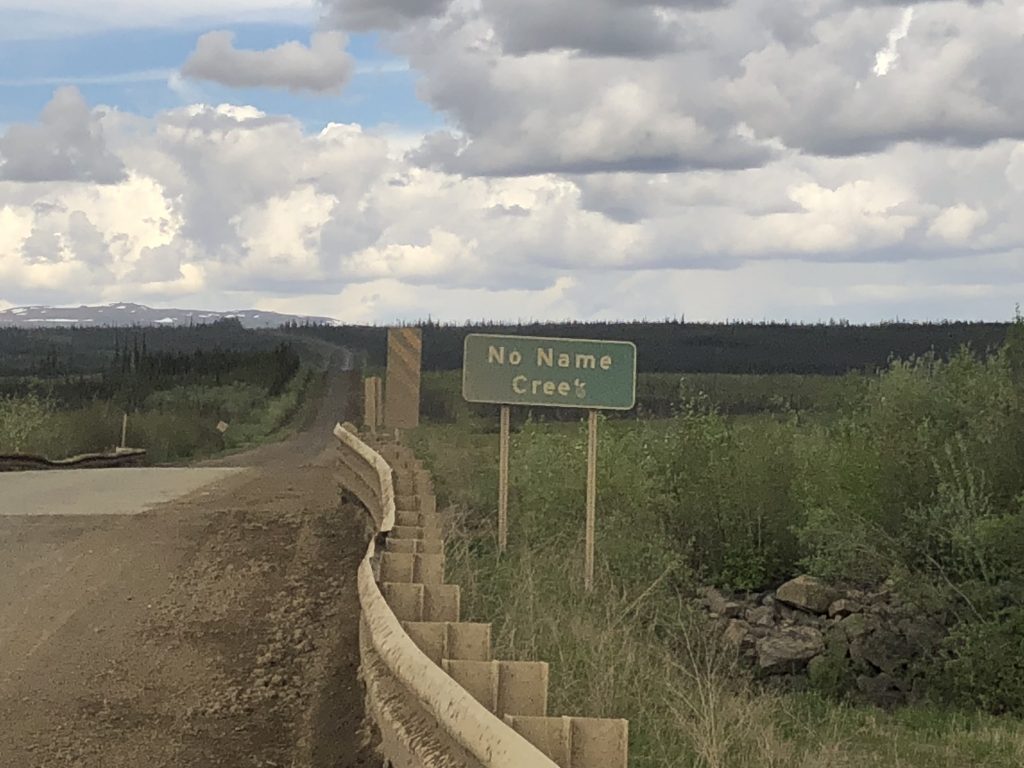 Further north the skies started to threaten rain. Rain was a worry up here, stories of how nasty the Dalton can get in the wet are everywhere! 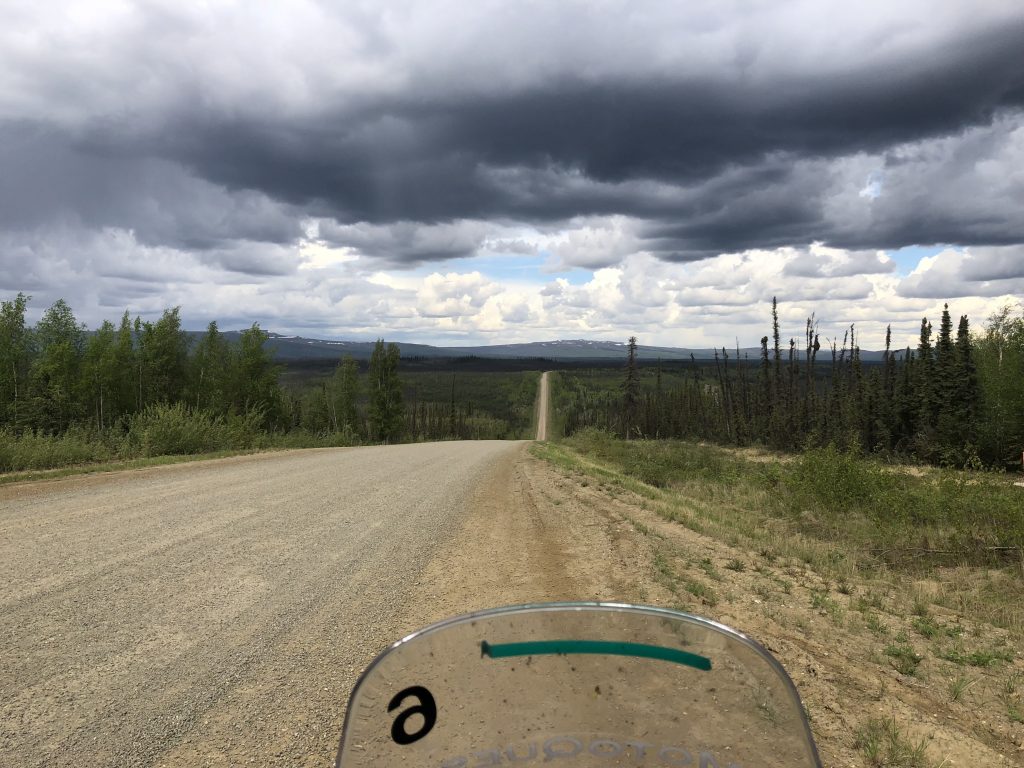 After Yukon Camp the next photo stop was the Arctic Circle sign, about 90kms further up the road. 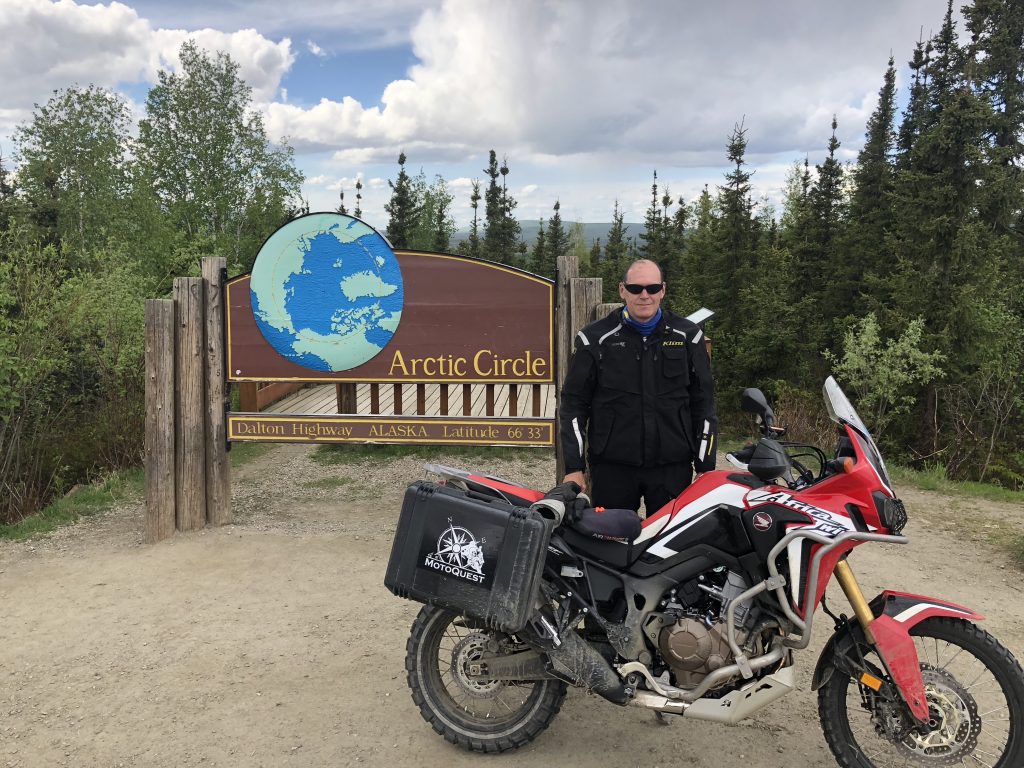 The road was not all gravel. There were tarred areas that were generally worse than riding on the gravel.  The tarred surfaces were uneven and great care needed to be taken not to lose yourself in a one of the many deep potholes.  In some sections big areas of missing tar had been filled with gravel and without warning you’d be riding around a corner and find yourself in the middle of a gravel patch. Nasty!

They had thought of some more names for things after the creek fail though. 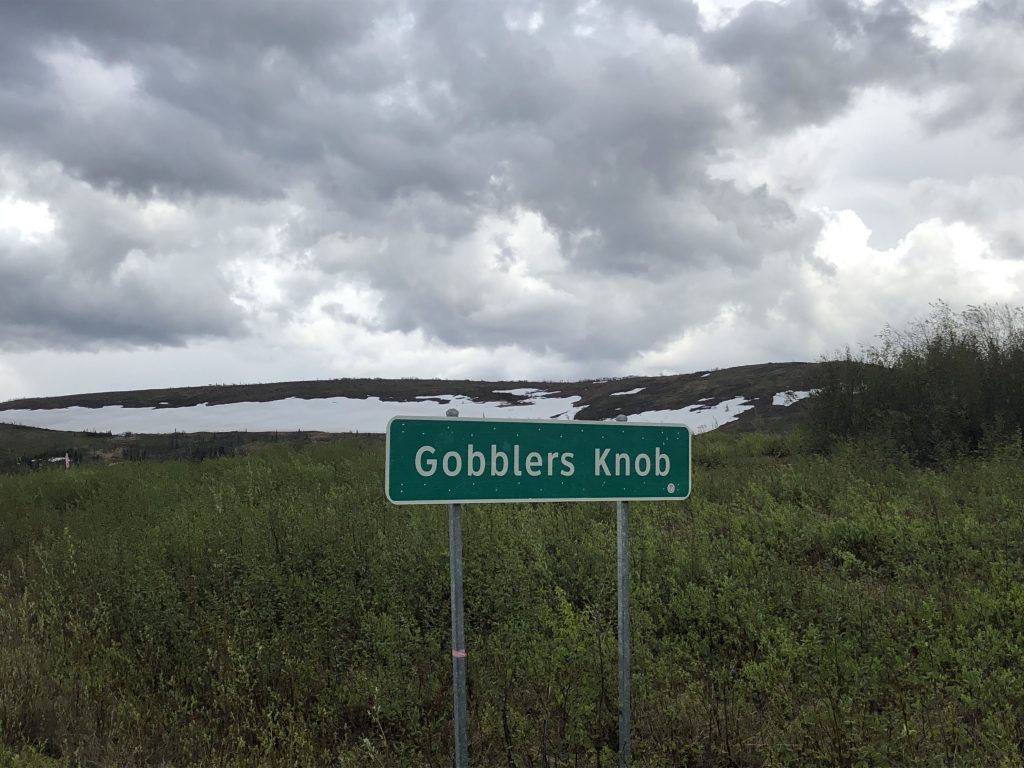 The trucks also made their presence felt out here. While the road was plenty wide enough for two trucks to pass when one came the other way it was smart to slow down, move as far over as possible and tilt your heat away from it because most likely you were going to get peppered by stones thrown up by the truck as it roared past. Many of the truck drivers slowed a little too, but some aren’t fond of motorcycles and tourists on their road if you get what I mean.

On the odd occasion when you caught one… overtaking is scary!

Roadworks on the gravel section of the Dalton are a constant challenge. Grading, pouring water all over it and loose slippery gravel and mud are all things to be careful of. It’s more common than you’d think to be stopped in the middle of nowhere. There was a challenging slippery uphill after this section where we were forced to follow the water truck! 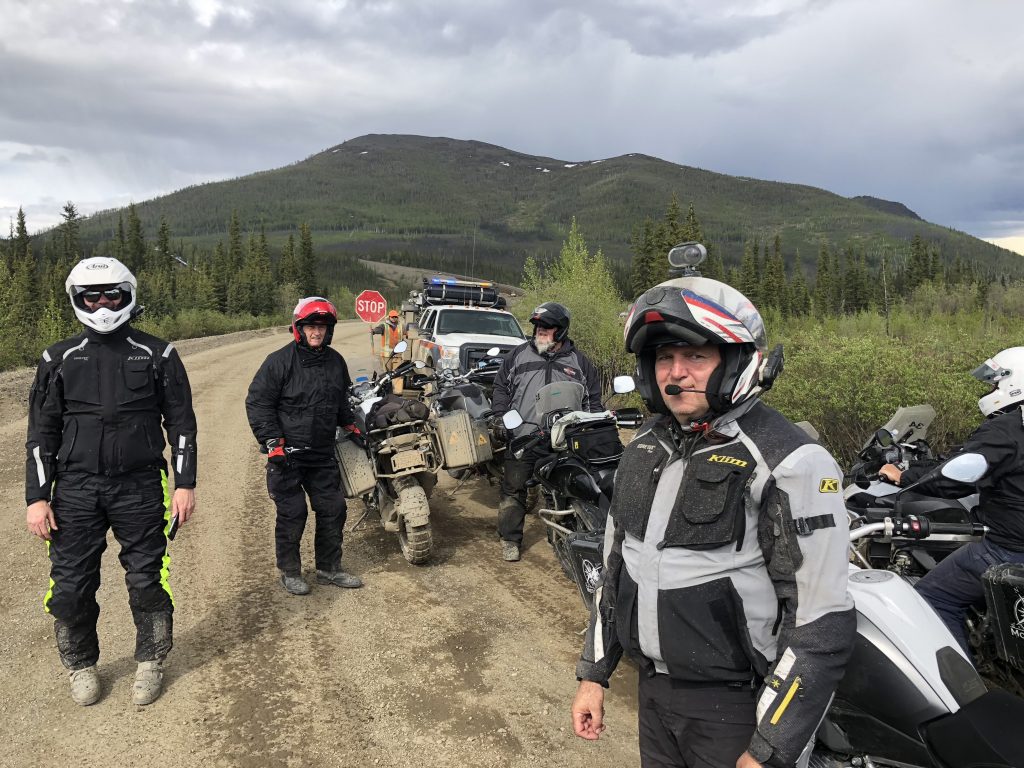 We got a bit of rain on the last leg to Coldfoot but the road remained in decent condition and there was also a bit of relatively good tar near Coldfoot to enjoy.

Coldfoot Camp was just as I’d imagined it after having seen it on Ice Road Truckers. 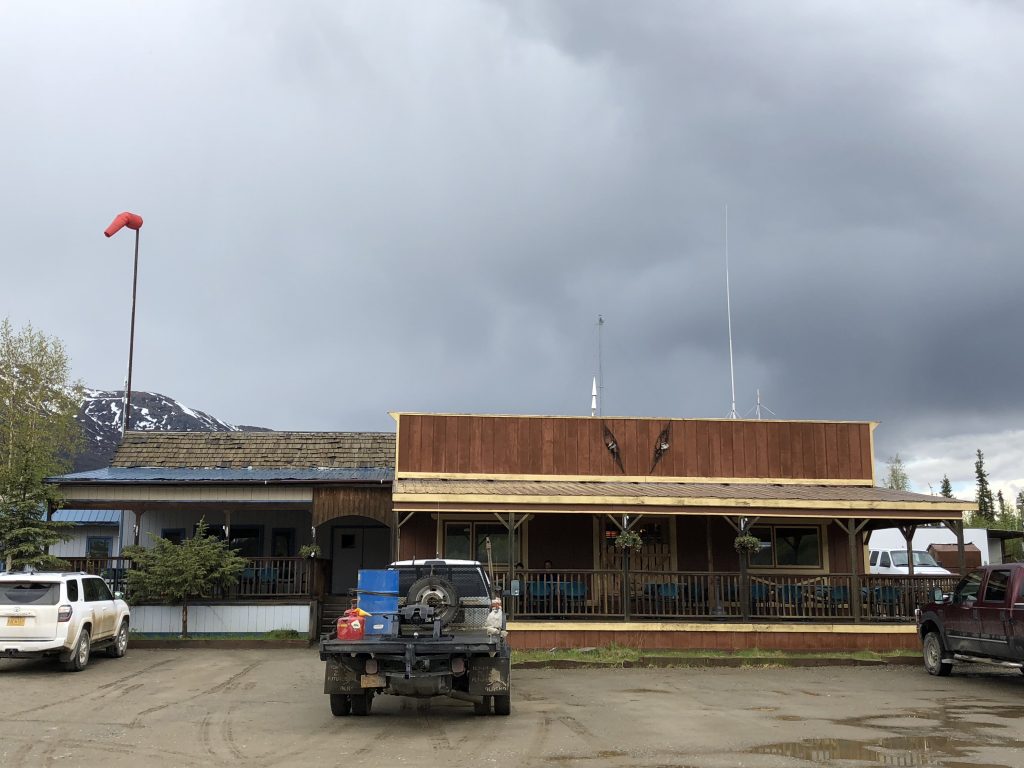 The main difference was that in winter during filming it’s all snow and ice.  We were there in the first week of summer and all that snow and ice was mud today.

About 5.30pm until about 9pm the menu in the roadhouse changes from ordering off the menu to an all you can eat buffet for about $20 (unless you are a truckie). So if you want a burger get there early or eat late. Don’t shun the all you can eat though, the food was good! There’s a selection of local beers and some wine to buy at “you can’t get this stuff anywhere else for a couple of hundred miles” prices but not so dear you would give it a miss. The Americans on the trip were surprised to find out that Australians don’t particularly like Fosters beer and Rob would only taste one they’d brought along if I promised not to take a photo. Oops! 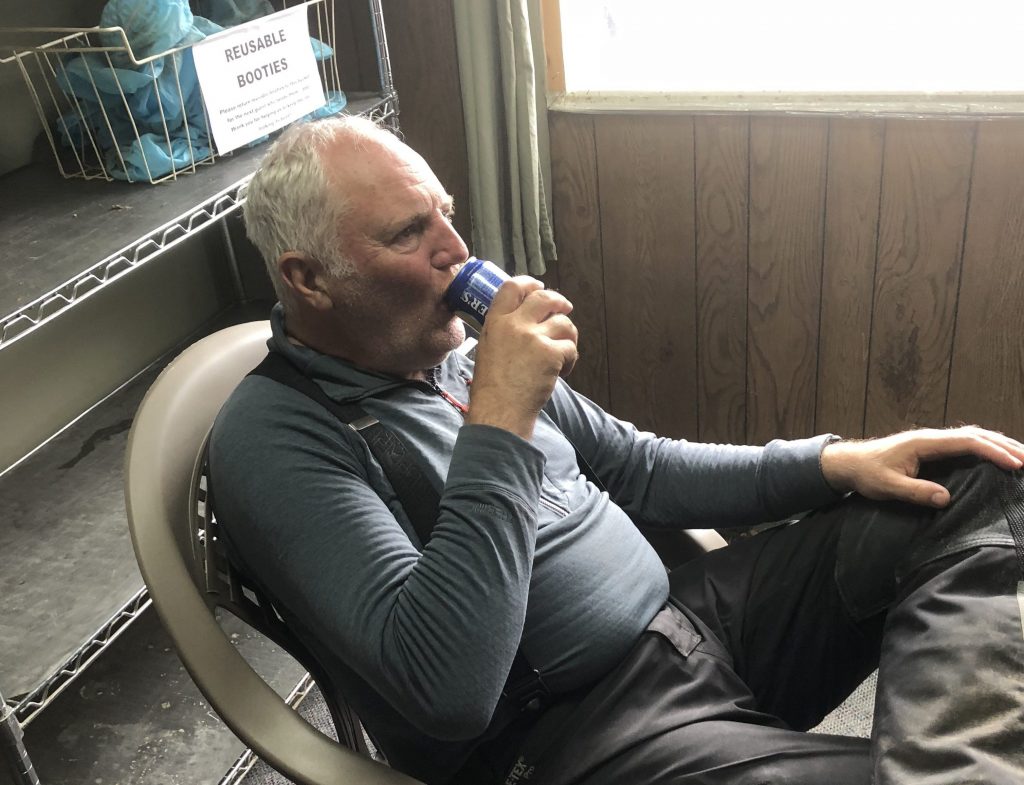 The accommodation in the Camp was very basic but clean on the inside. 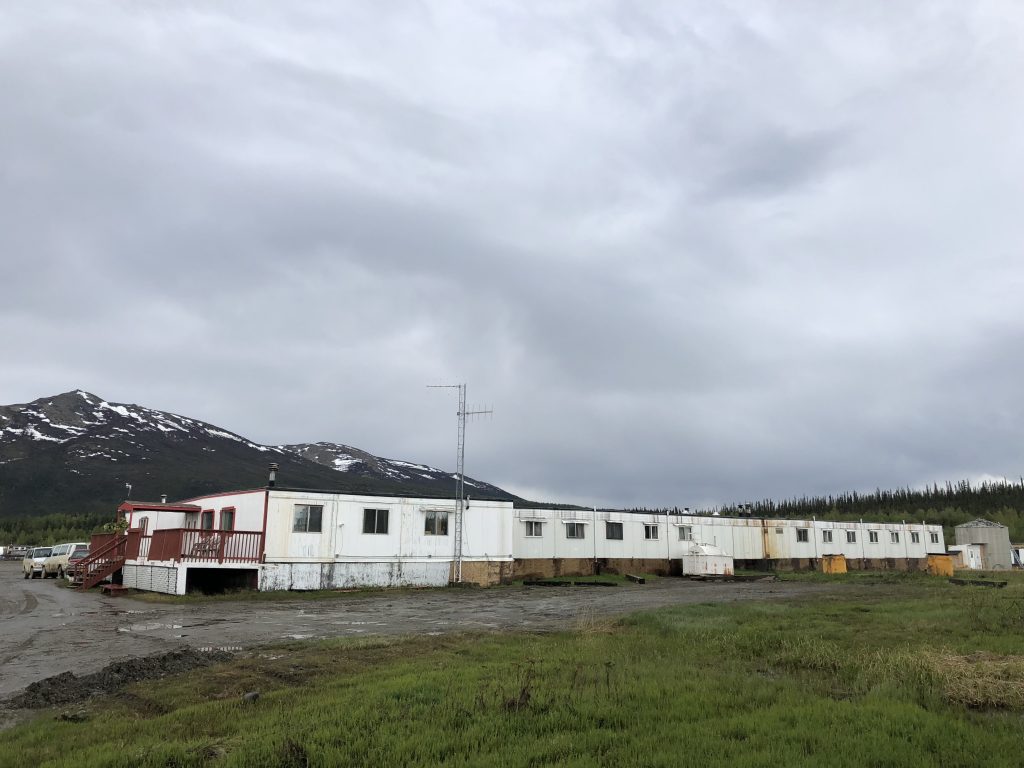 The rooms were two single beds with just enough room to walk between. Each of the rooms we had had a small ensuite. Thin walls require ear plugs if you are a light sleeper. 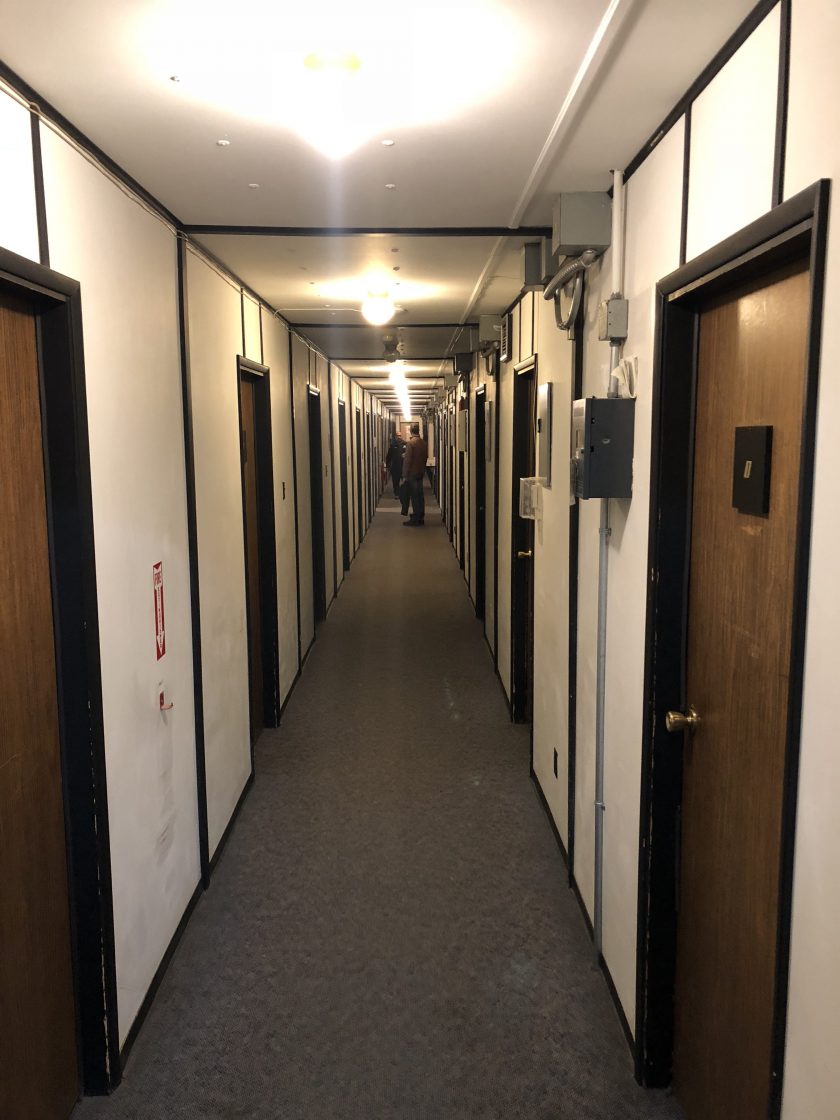 The sun didn’t go down again but sleep came easily. Today’s ride was only 258 miles (415kms) but for one reason or another it took most of the day and the rest felt well earned. Tomorrow we’d be in Deadhorse.

2 Replies to “Fairbanks to Coldfoot – Day 2”