The route sheet provided by Dan the awesome Motoquest Ride Guide attests to the remoteness we would experience on today’s 239 mile (384k) ride to Deadhorse Alaska.

The first message is if you are going to ride to Prudhoe Bay you’ll need at least 384km’s worth of fuel. Our extra fuel was carried on the support vehicle driven by Bill.

The all you can eat breakfast at Coldfoot was fantastic and there weren’t any cafe’s between here and Deadhorse so eating up was required. Lunch for today was ordered and pre-paid last night and was ready to load onto the bikes this morning. A huge deconstructed meat and salad sanga, a bag of chips, a cookie, a pice fo fruit, a can of Coke and more for a reasonable price.

There was a buzz in the group, we were all excited to reach the top end of our ride and our expectations about the terrain and what we’d see on the other side of the Brooks Range on the arctic tundra would finally be met, or not.

North from Coldfoot there was 35 miles of good tar to get the day started. 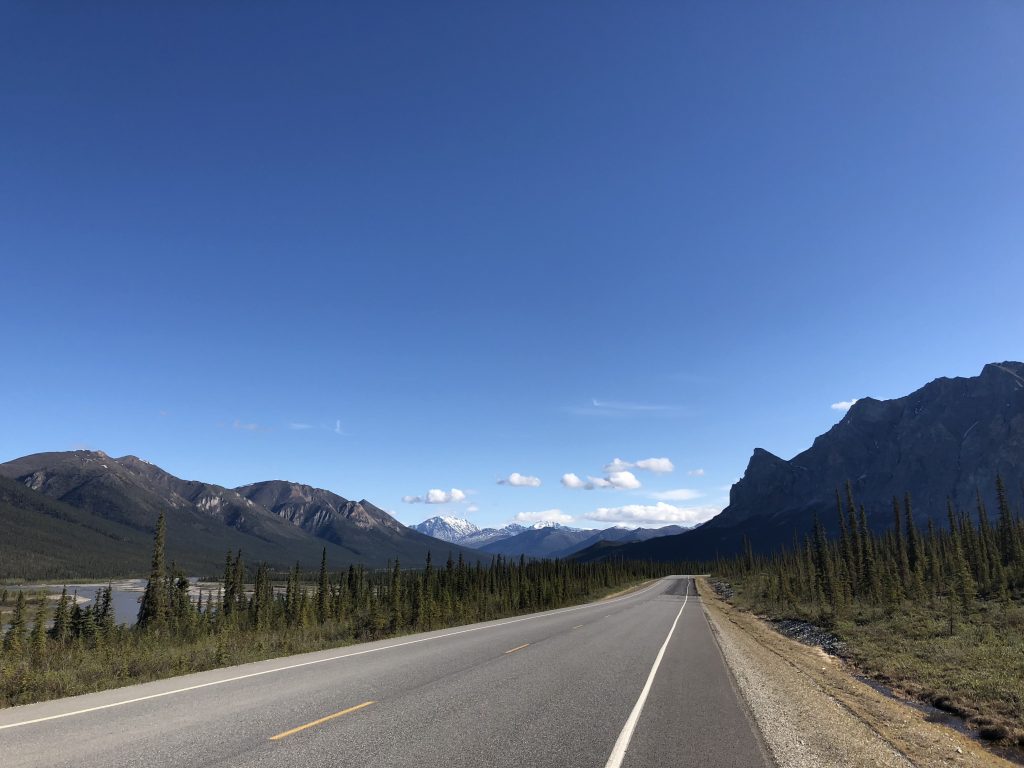 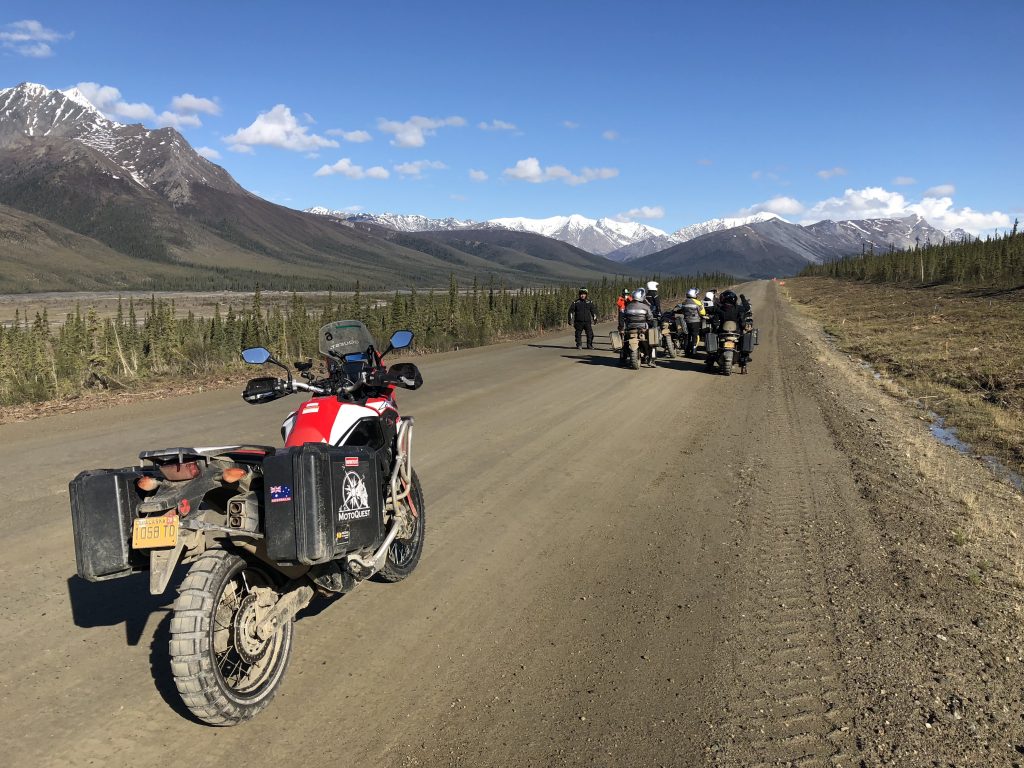 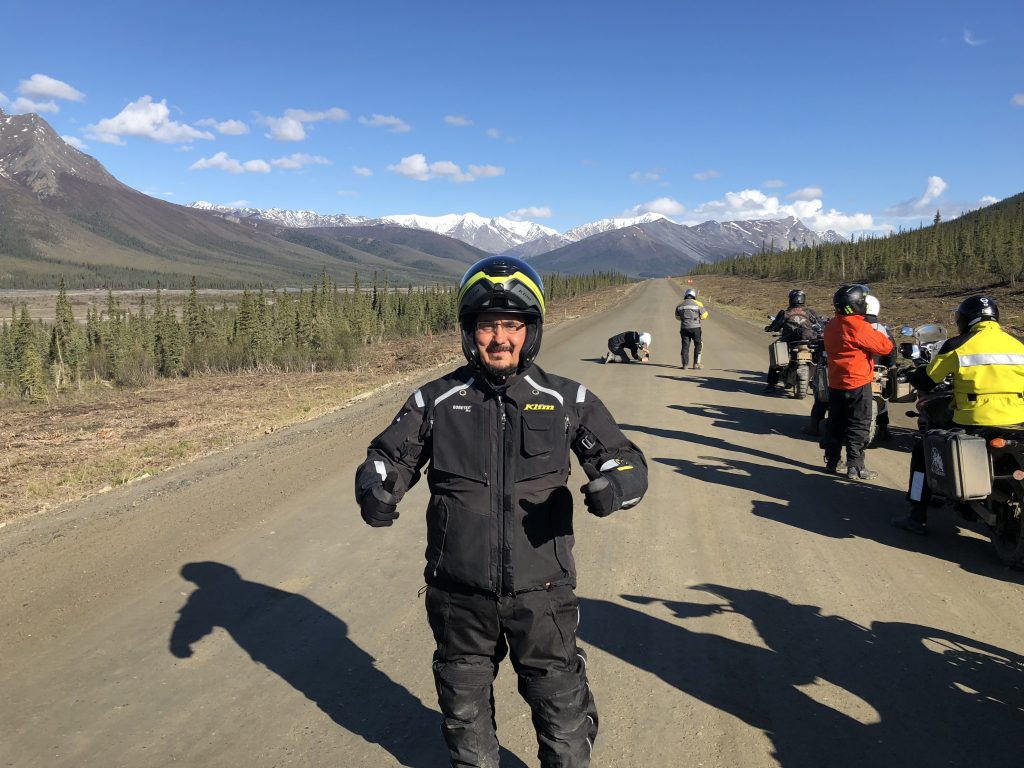 and Rob, getting his camera out. 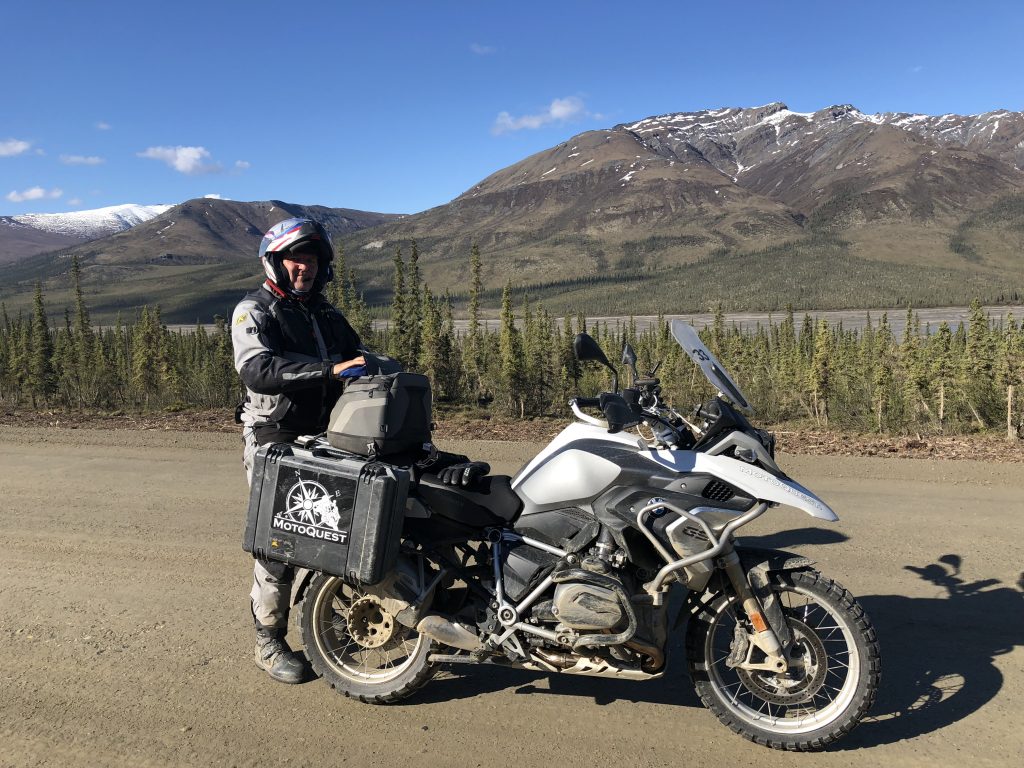 About 70 miles in we reached the start of Atigun Pass. I immediately recognised the uphill left hand sweeper from Ice Road Truckers and was quietly excited to be there. There’s a little toilet on the right, the next one is a long long way off if you need it. 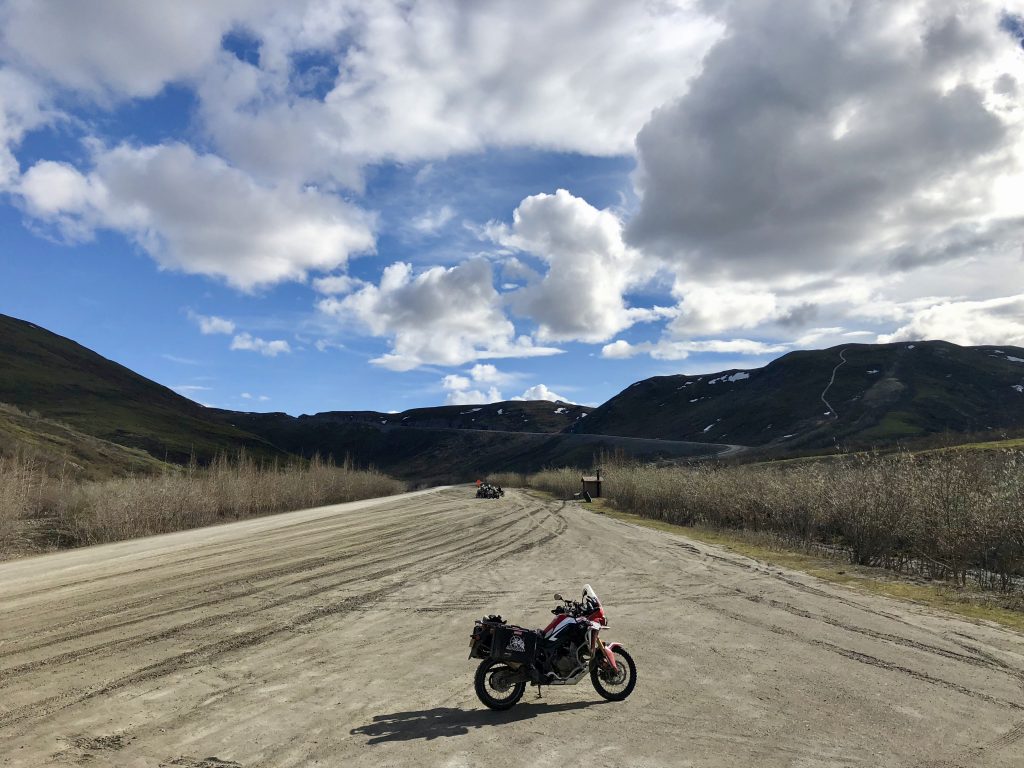 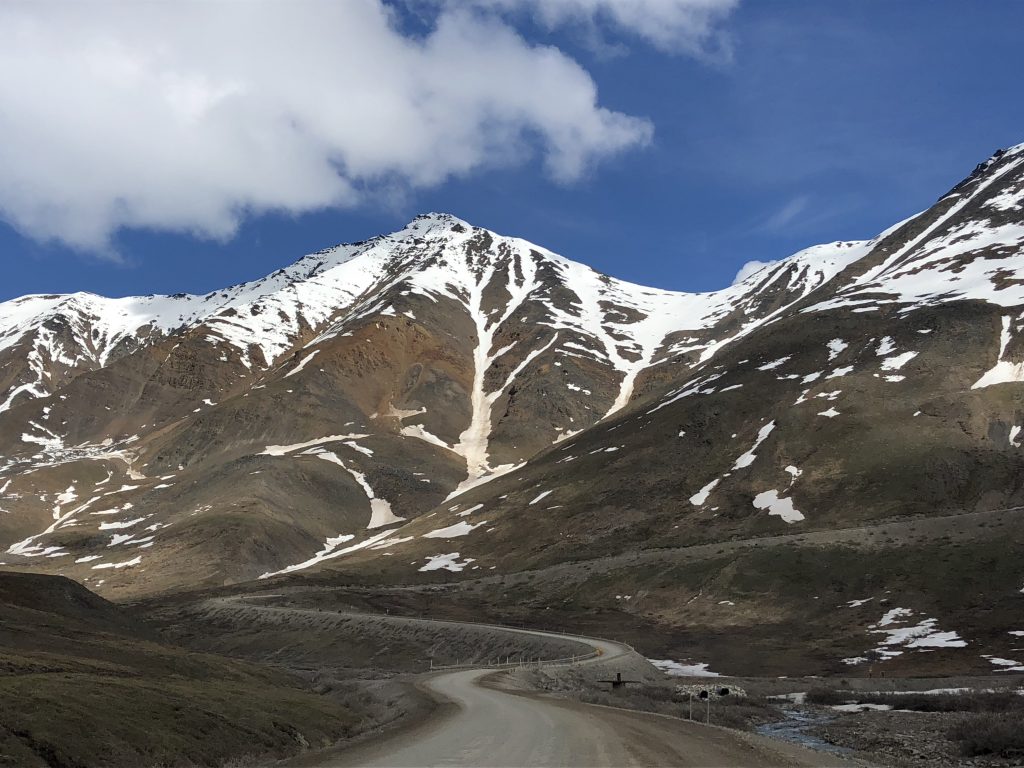 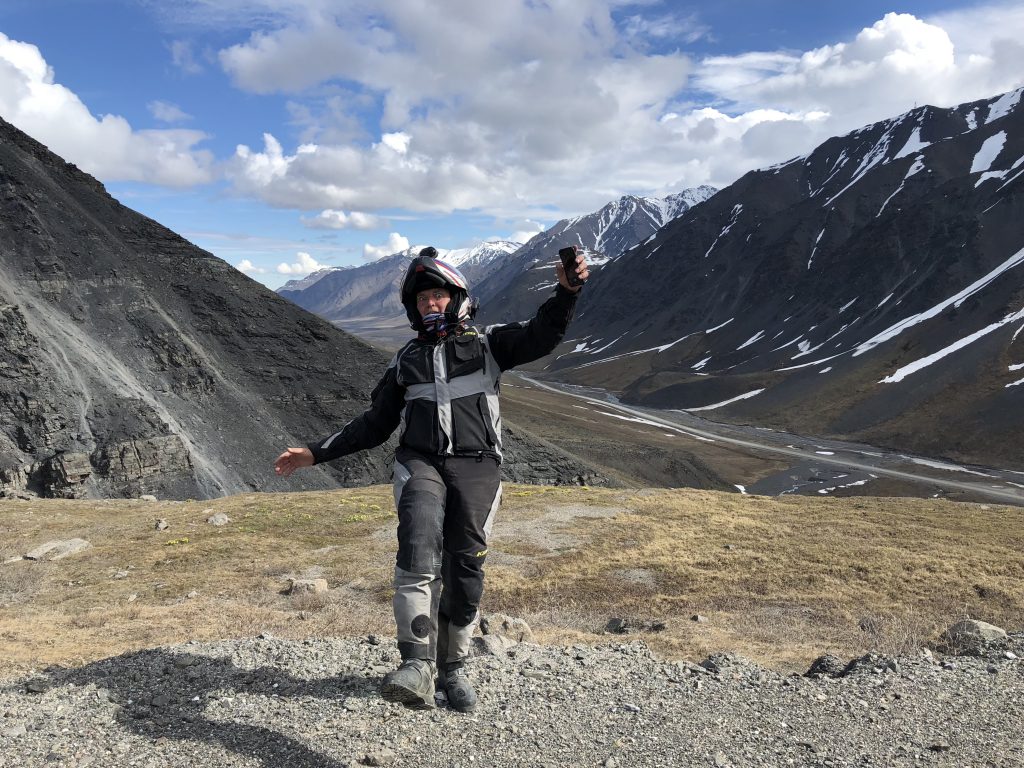 We all stopped to take a moment to enjoy in this magnificent part of the world. 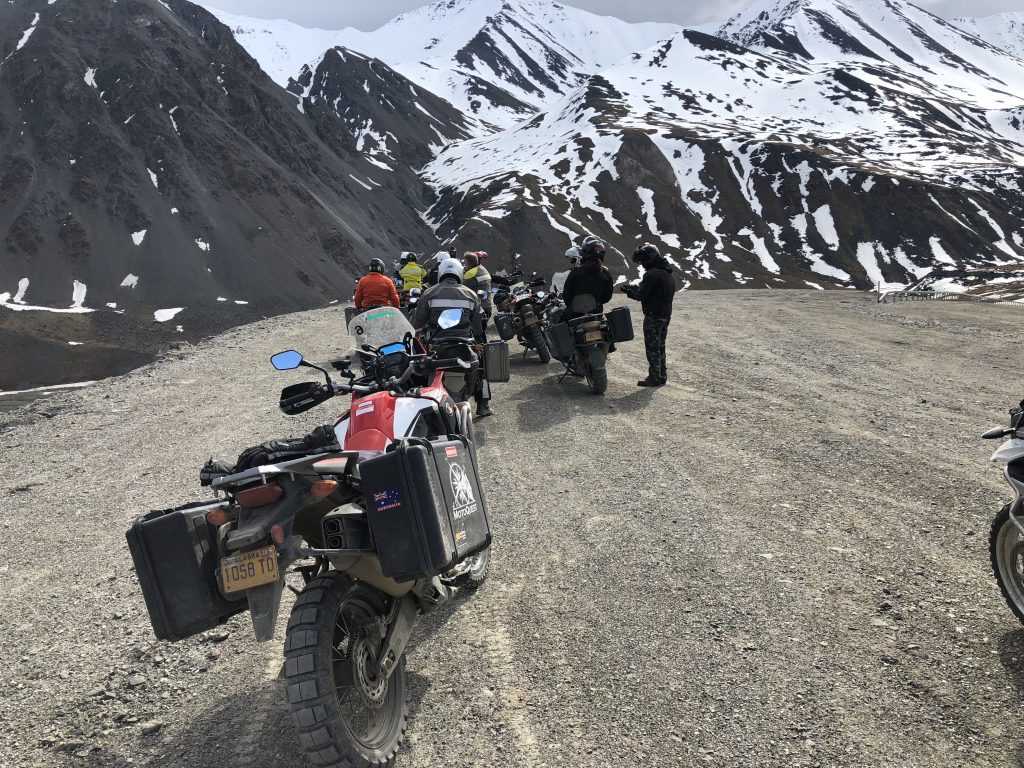 Over the pass we were in the Arctic Tundra. No trees, just flattish wet and cold land between mountain peaks.

Rob went forward in order to take some pics with the ranges in the background. 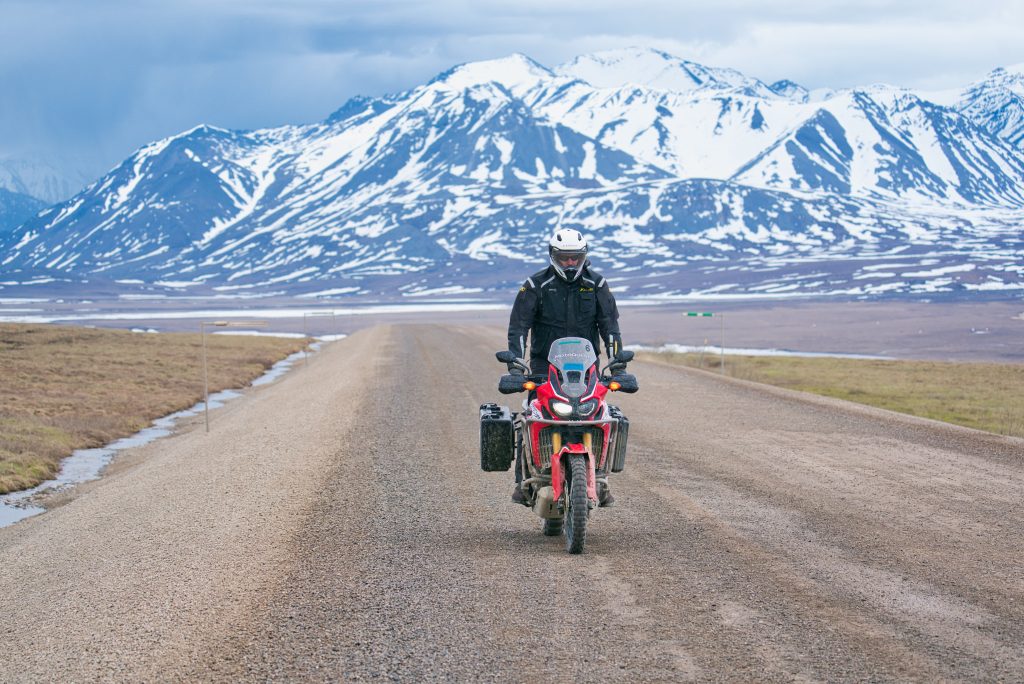 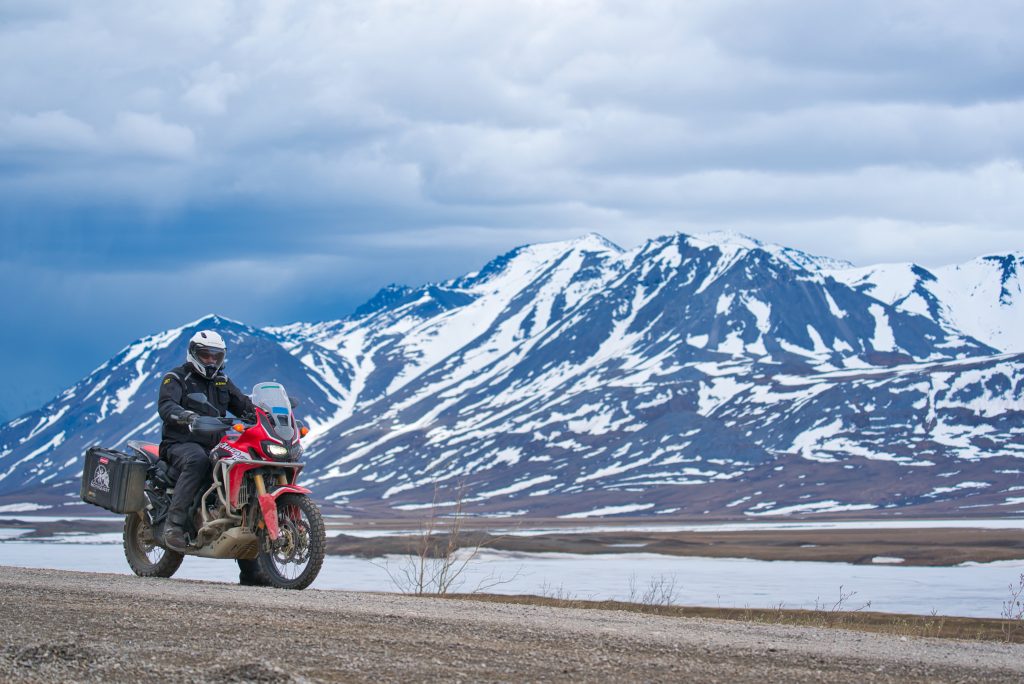 Our lunch stop and fuel top-up at Lake Galbraith was in a rest stop next to a bridge, no facilities, which was fine for the gents on the ride but Crystal, Larry’s pillion was feeling the pressure of the day and decided to wait. 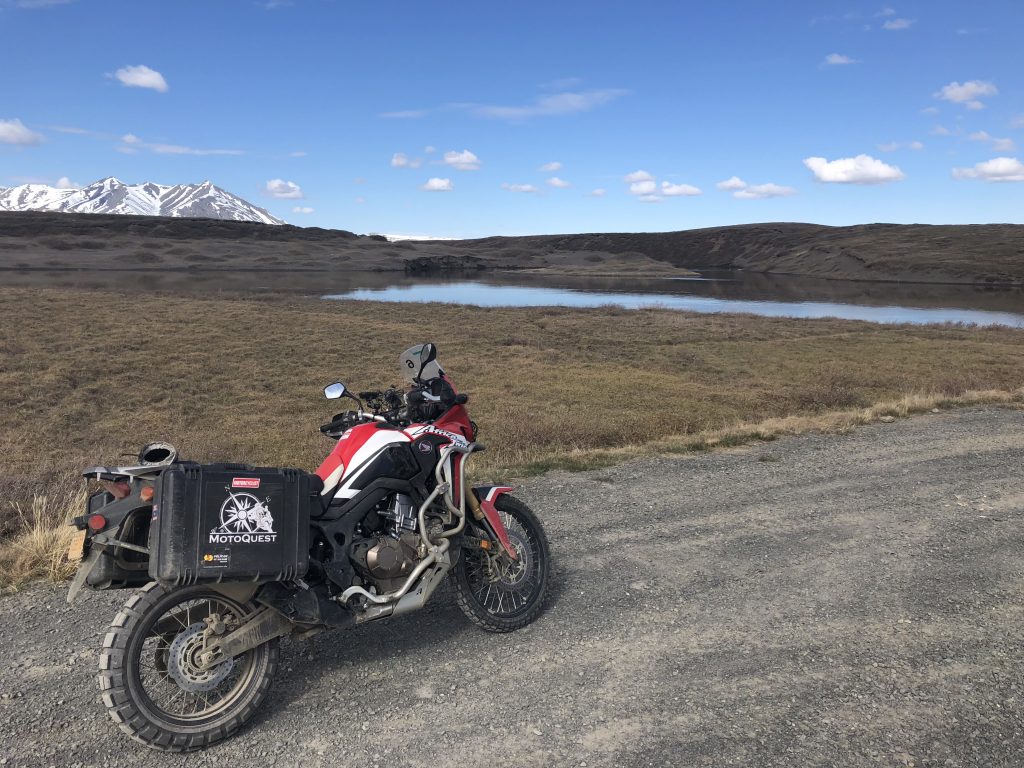 The lunch packed at Coldfoot was awesome! The next part of the ride was one photo opportunity after the next. It was still surprisingly warm but as we travelled further north snow became ever more present.

The gravel road surface was generally pretty good. We had no problems travelling at the 55mph speed limit, in fact speed was your friend in some of the looser gravel areas. 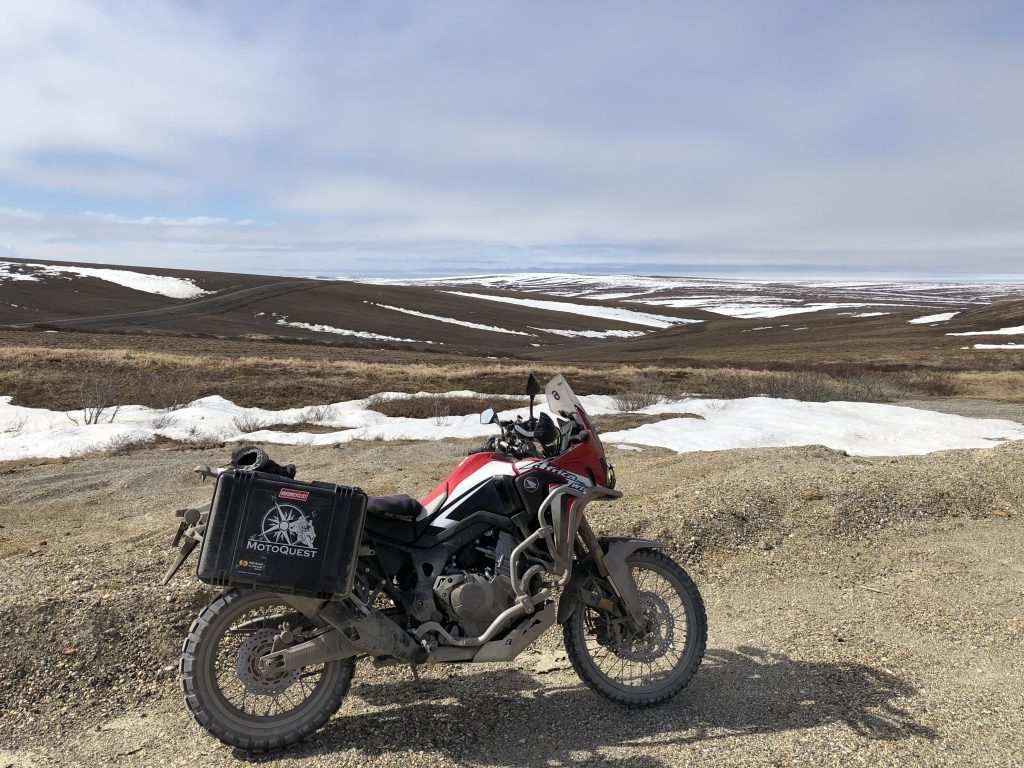 We stopped at a rest stop further along where Rob and I had a snow fight which turned a little ugly (in fun of course) that was caught on video.  After that, in the distance we rode ever closer to a greyish haze that sort of looked like low cloud but we were soon to discover definitely wasn’t. 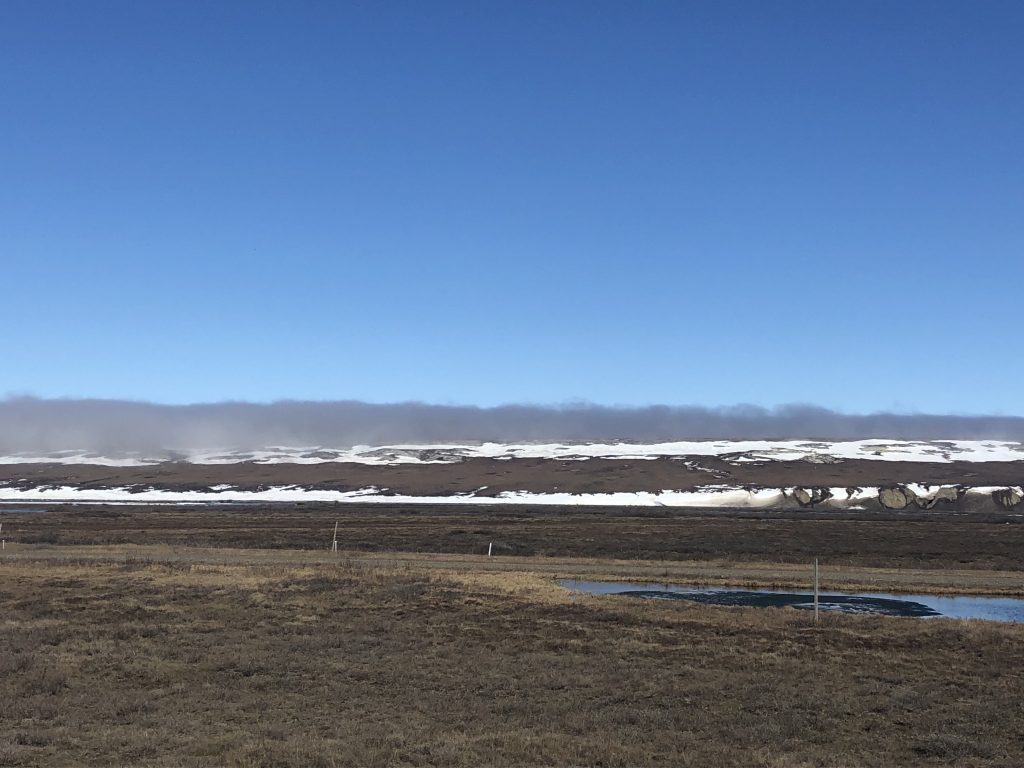 As we approached the haze and got within 60  miles or so of Deadhorse the temperature plummeted from 17 degrees C to 2. The suddenness of it was surprising. The brownish tundra was now covered in snow and most of the water was iced over.  The road was the only high point cutting through it.

There were deep loose gravel sections and evidence that the graders working in were only concerned with trucks who had no problems with 20cm ridges of stones on the roadway. Added to that maintenance trucks pouring water and calcium chloride over the road made it that much trickier in sections.  I’m not saying you need to be highly skilled to tackle this ride but you do need to be alert and ready for anything. 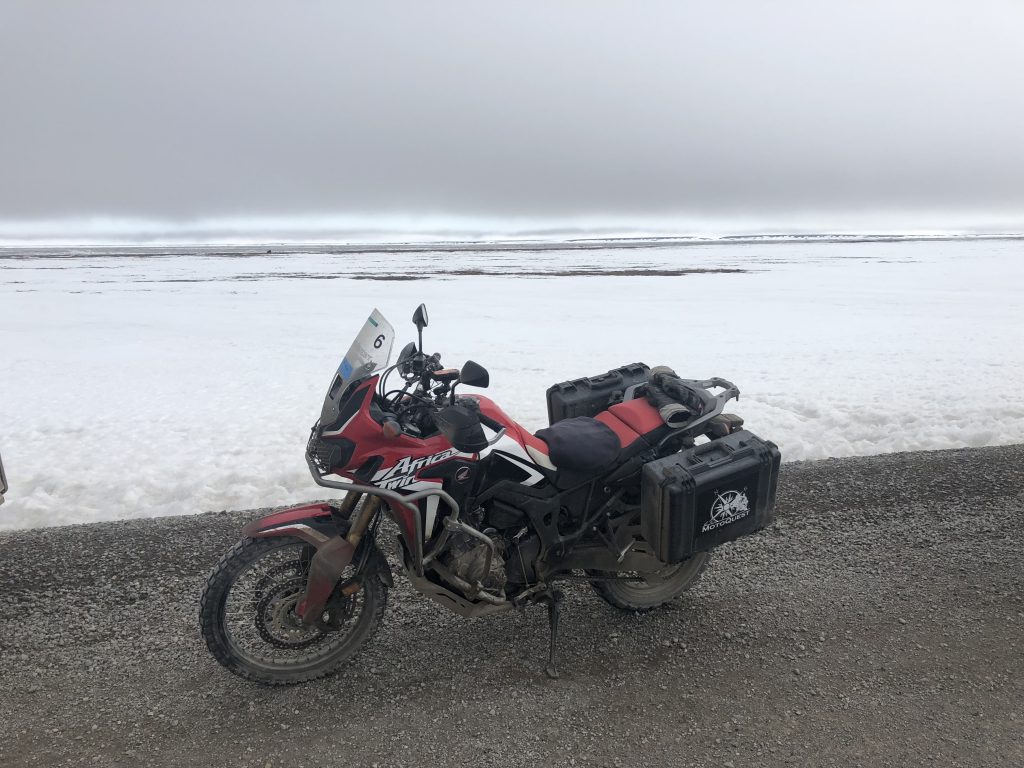 Everything was grey and cold, the sunlight and warmth we’d enjoyed all day was gone. Dan saw a Musk Ox in the distance and we stopped briefly to have a look. It was too far away to photograph and you really only could see it when it moved. 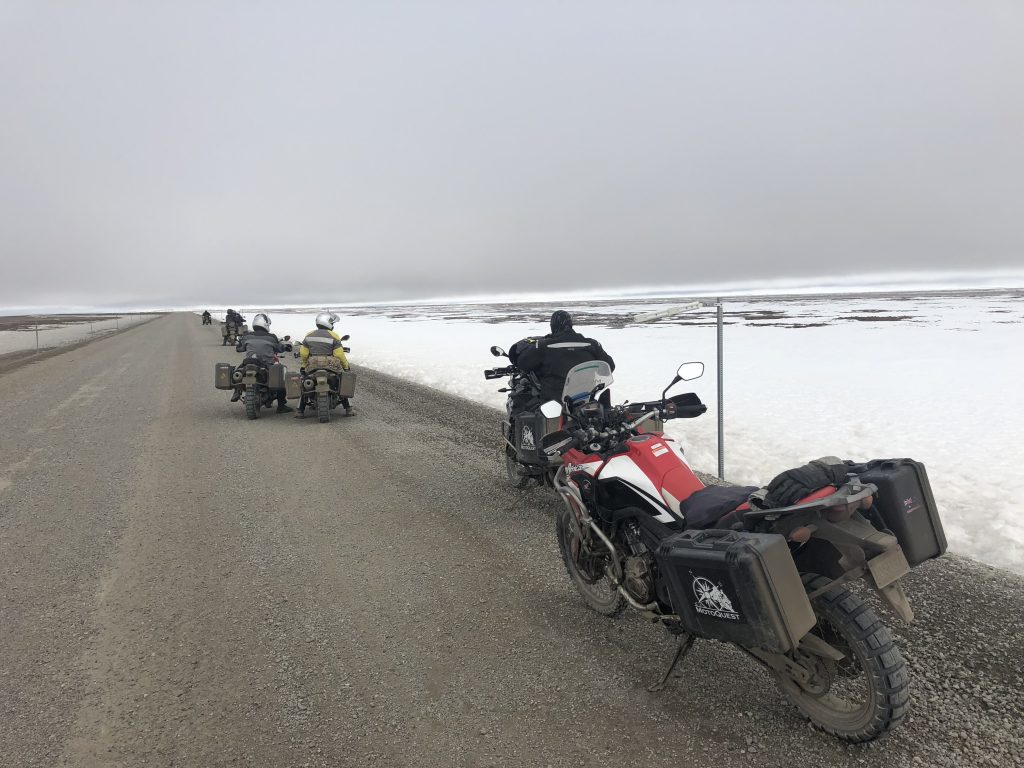 But the change in temperature just had us keen to get inside and warm. The BMW’s on the trip had the advantage of heated grips, my Africa Twin didn’t and while it was manageable it was far from comfortable on the hands.

We made it to Deadhorse before sunset, just kidding there was no sunset. The town was surprisingly big and a little tricky to find your way around.  We wound our way through it to take some pics at the iconic General Store and Deadhorse sign. Then as soon as possible we went inside to warm up and, as you’d expect, buy the T-shirt. 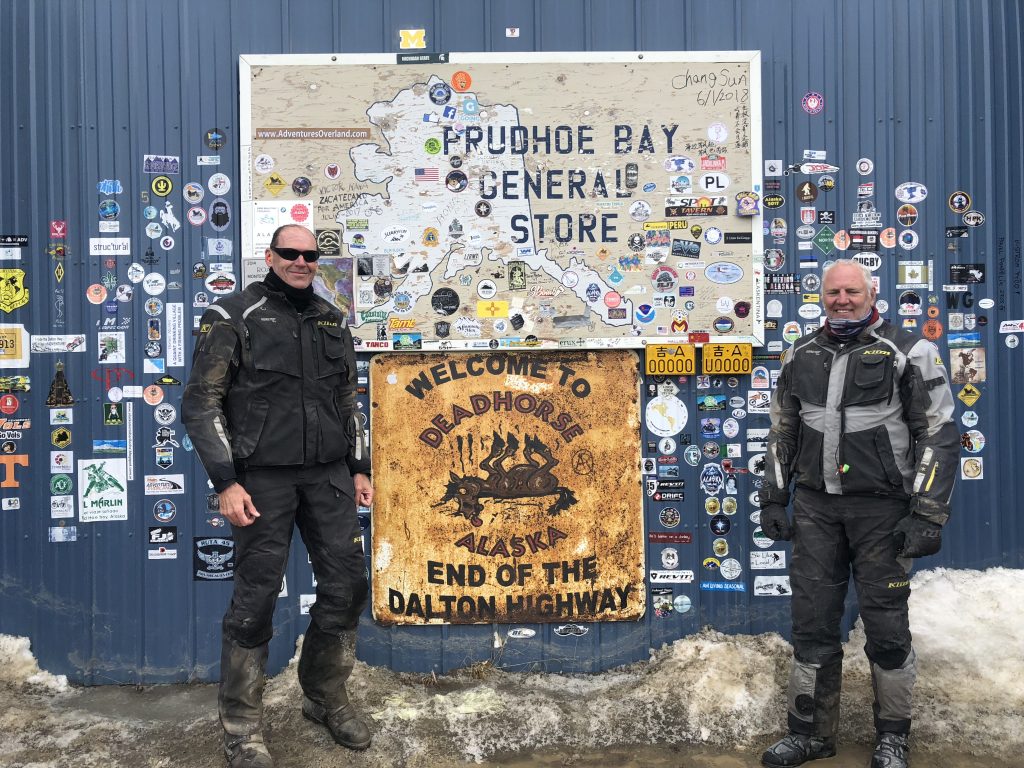 We then went to fuel up ready for tomorrow.  The facility we got fuel from was unattended and card only, I’m not sure if there’s another location but if your credit cards don’t work well in the US you might need a plan B. While waiting for the others to fuel up Rob decided he wanted a photo next to some ice road trucks.  It nearly got very ugly riding on that permafrost and I was tossing up whether to wait and get the funny photo or help him out. The latter was my choice. 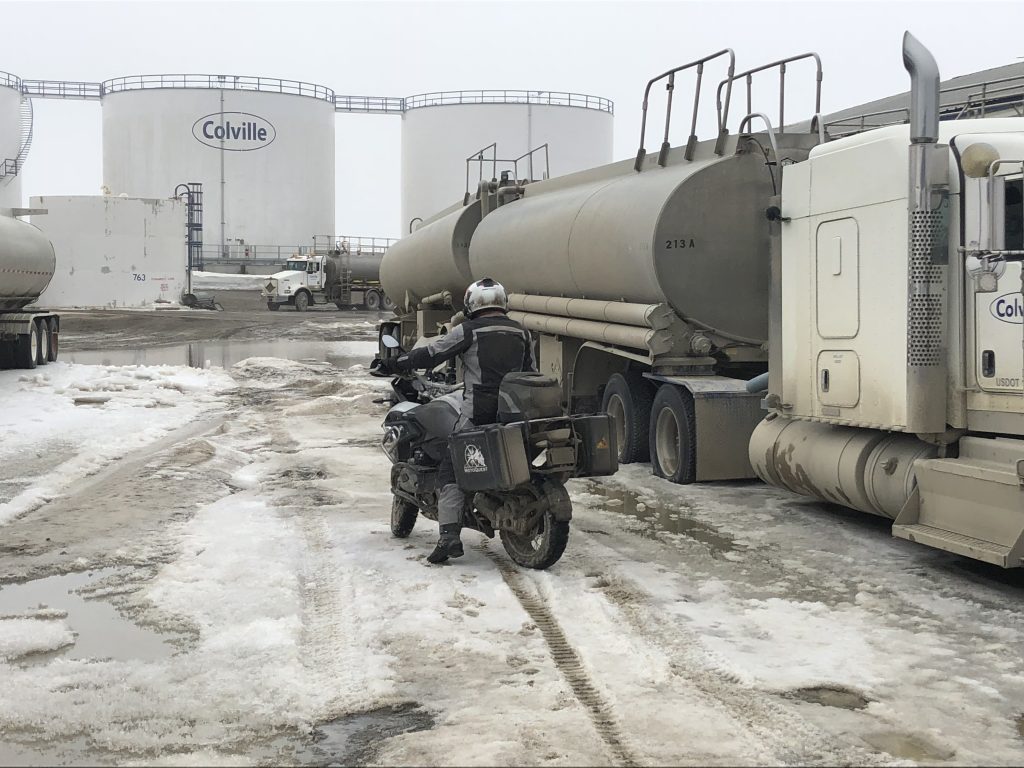 We stayed at Deadhorse Camp, which is most often a base for FIFO contractors working in the oilfields at Prudoe Bay and occasionally used by tourists. Once again an all you can eat meal for twenty odd bucks which was excellent.  Deadhorse is a dry town, you can’t buy alcohol anywhere. So if you didn’t stock up on some in Fairbanks a couple of days before there’s no celebration of arriving at the top to be had until you get back to Coldfoot. 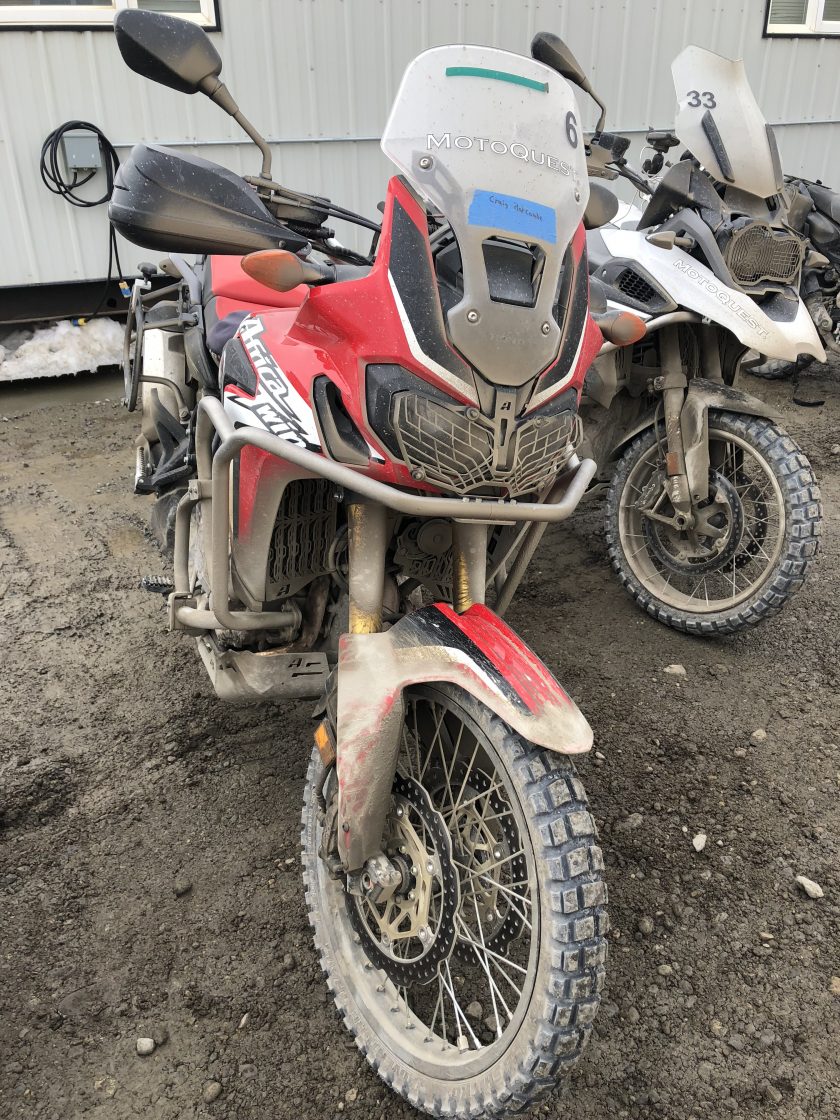 Once again we went to bed with the sun still high. We’d made it to Deadhorse! Tomorrow morning we’d be going to the Arctic Ocean on a shuttle bus (the roads there are not public) before we turn around to head home.

One Reply to “Coldfoot to Deadhorse AK – Day 3”