I’d seen Ice Road Truckers a few times and while the show might not be scintillating viewing the remoteness and place names like Fairbanks, Coldfoot, Deadhorse and Atigun Pass have been tugging at the Adventure Rider in me for a while. I ran the possibility past a mate, Rob, who simply replied..”I’m in.” Alaska here we come.

After some research I discovered you can hire motorcycles you are allowed to ride to Prudhoe Bay (Deadhorse) from Motoquest and Alaska Motorcycle Rentals. To take a rental up there you’ll find there are special conditions you’ll need to understand. Rob and I didn’t really want to worry about logistics and carrying fuel so we took the path of least resistance, Motoquest’s Prudhoe Bay Adventure tour. We opted for familiar bikes. I chose the Honda Africa Twin while Rob who has a GSA in the shed went for the BMW R1200GS.  Note that food, except for a couple of celebration meals, and fuel are not included in the tour.

On Day 0 after dropping the Harley-Davidson Ultra Limited I’d been riding around the Kenai Peninsula back to Motoquest I got an opportunity to prepare the Africa Twin. 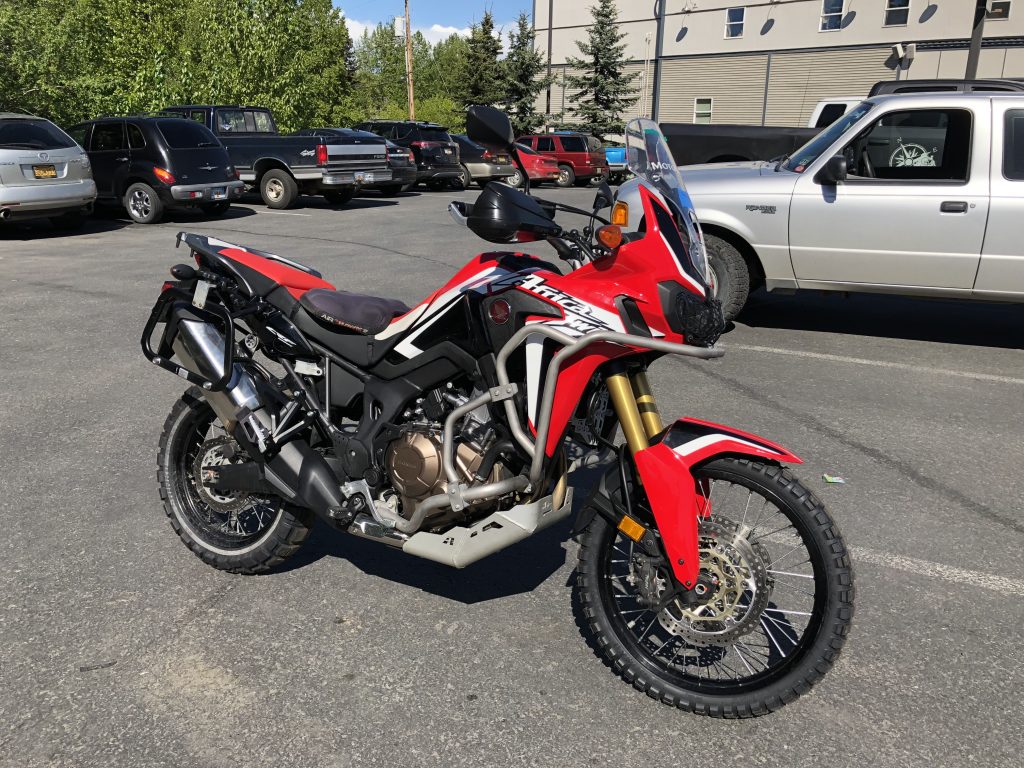 It was the ABS version with a decent bash plate, crash bars and Barkbusters fitted .  I atahed the SPOT, iPhone mount, Omnicruise and 12 Volt outlet onto the bike. Motoquest puts a fused SAE connector to the battery on all their bikes you can use for that purpose or for heated gear if you like. With the airhawk on the seat I was done. The bike was in good shape with low mileage and a new set of Shinko’s.

Motoquest provide two large panniers for the stuff you’ll need during the day and the support vehicle was set to carry our extra stuff and also towed a trailer with a spare bike (a GS1200).

Accommodation at  The Lakefront Anchorage was included for the first night, a nice place right on the lake where you can sit and watch sea planes land and takeoff to your heart’s content. They were also happy to store suitcases and any other luggage we weren’t taking on the trip north. The hotel is on the outskirts of town not far from the airport and was within walking distance to Motoquest, Gwennies, Macas, Subway and a few other restaurants.

A meet and greet 3 course dinner was provided at a very nice local restaurant serving great food. Fresh atlantic salmon was a popular choice. A shuttle bus took us too and from the restaurant so wobbly legs weren’t an issue. We got to know the guides, Dan Patino and William May and the rest of the tour group. There was one Canadian, we two Aussies and the rest were American.  13 bikes not including the guides and one couple, Larry and Crystal, taking on the Dalton Highway 2up on a GS. Respect!

With the first impressions out of the way it was time to hit the sack, the riding started in the morning.

The next morning it was a 9am pickup to get us to Motoquest where the bikes were lined up ready to attach the luggage, take part in the briefing and get on the road. 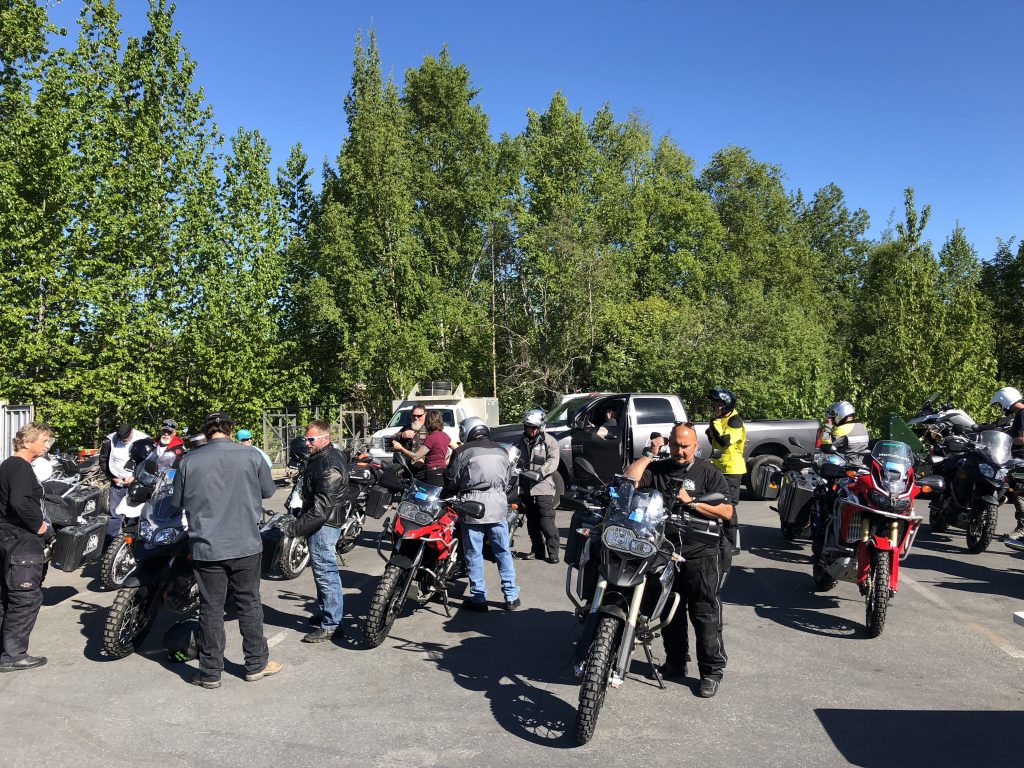 The first stop was at Mirror Lake, only 28 miles in where people got a chance to make final adjustments to their bike/luggage and take care of any other business that might have arisen. 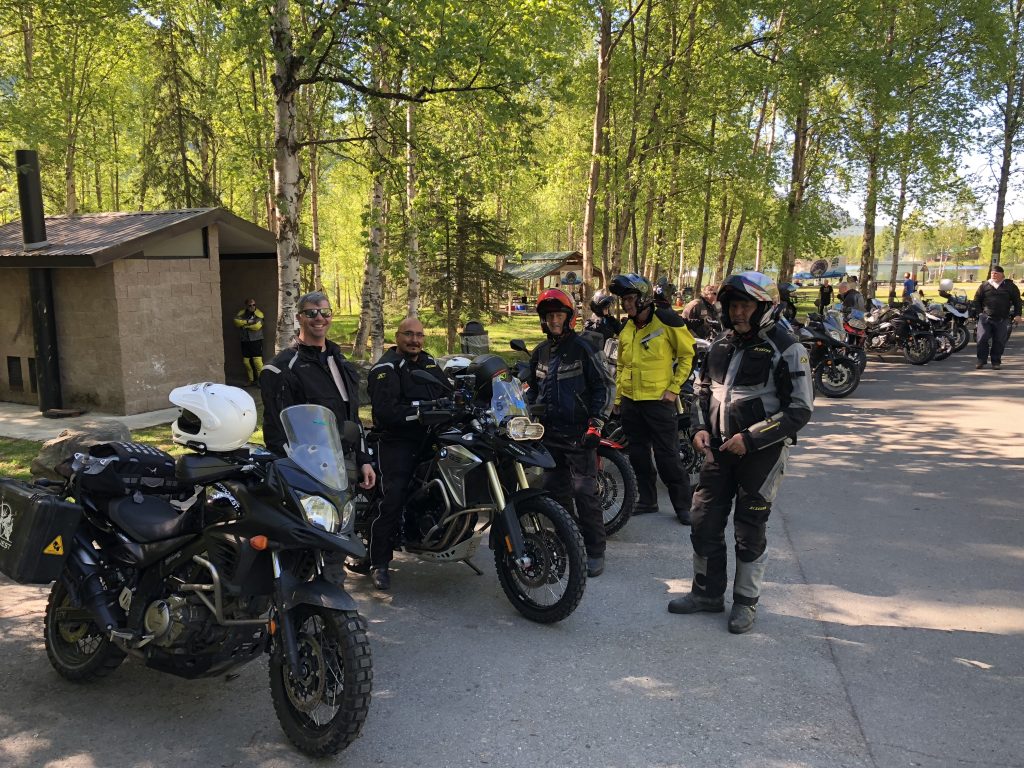 I wandered over to have a look at the lake and chatted to some locals who were setting up for a picnic. It was a beautiful spot to hang out in the sunshine. 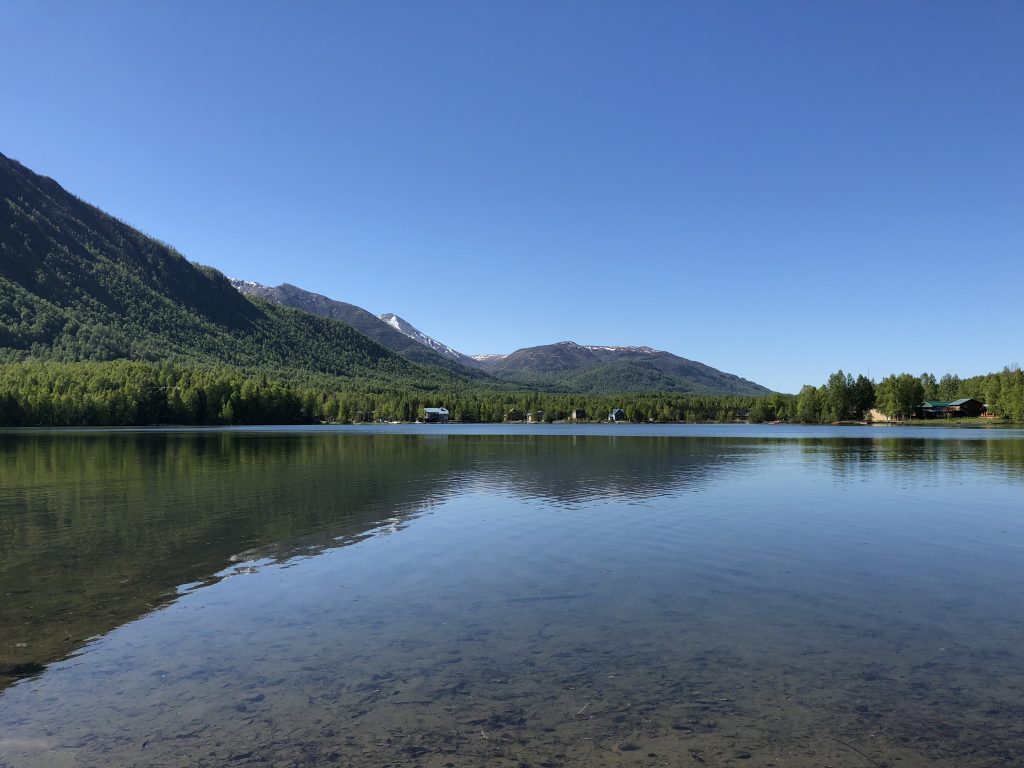 Dan picked up that Rob and I weren’t much for stopping and we had been given the route sheet setting out stops and distances for the day so he gave us the option of forging ahead. He didn’t need to repeat himself.

The multi-lane freeway turned into the Parkes Highway about Wasilla. There wasn’t going to be any gravel today in the 360miles (580km) to Fairbanks.  The next stop was the Tesoro (Fuel brand) at Talkeetna and as the others started to arrive and settle in for a chat Rob and I left for the next stop and a few photos along the way. 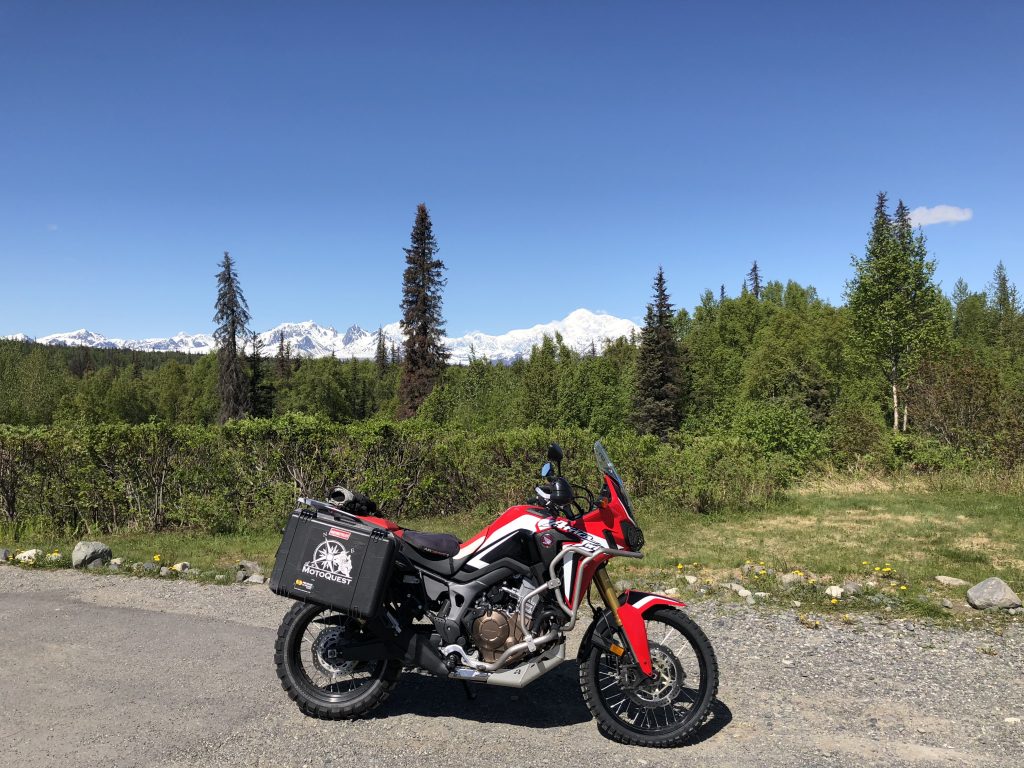 Lunch with the group was at McKinley View Lodge another 60k’s on. The view of Denali (formerly Mt McKinley), the world’s tallest mountain (you’ll need to do your own research to find out why) was fantastic from the deck while eating lunch. 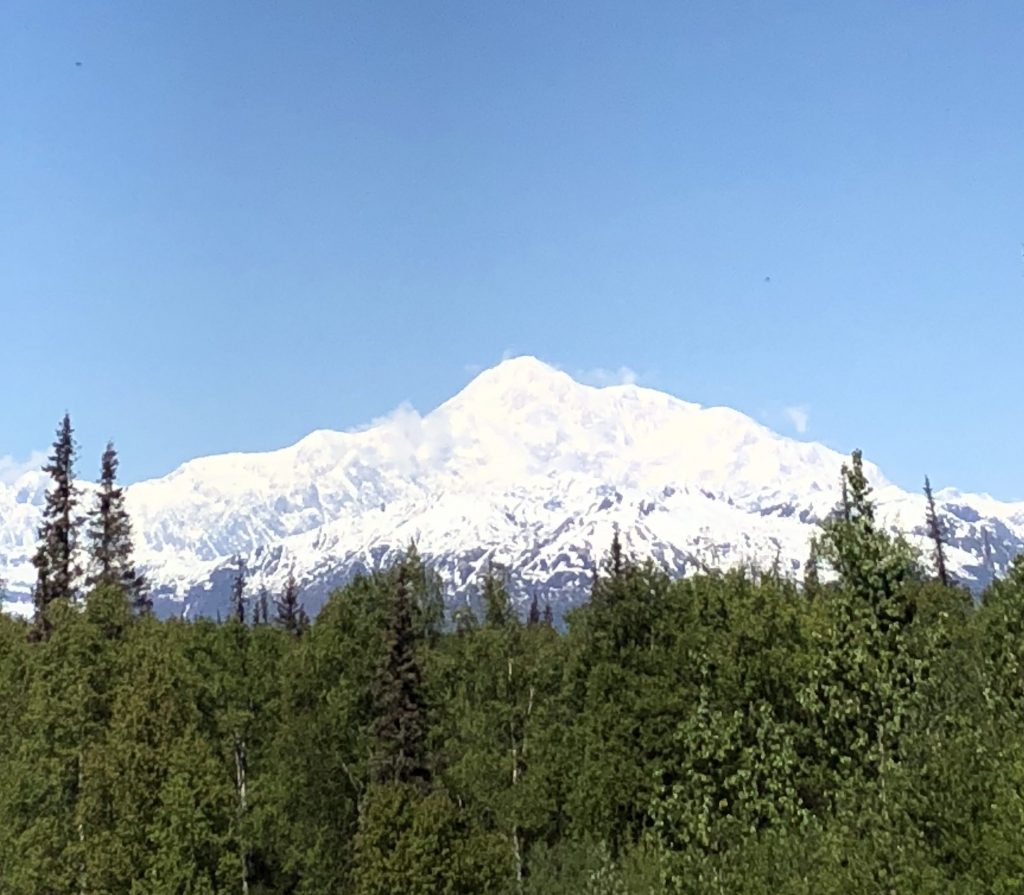 A little further up the road though there’s a viewing platform near the highway that’s also worth a photo stop. The day was sunny and warm but there was still ice on the waterways visible from the highway. 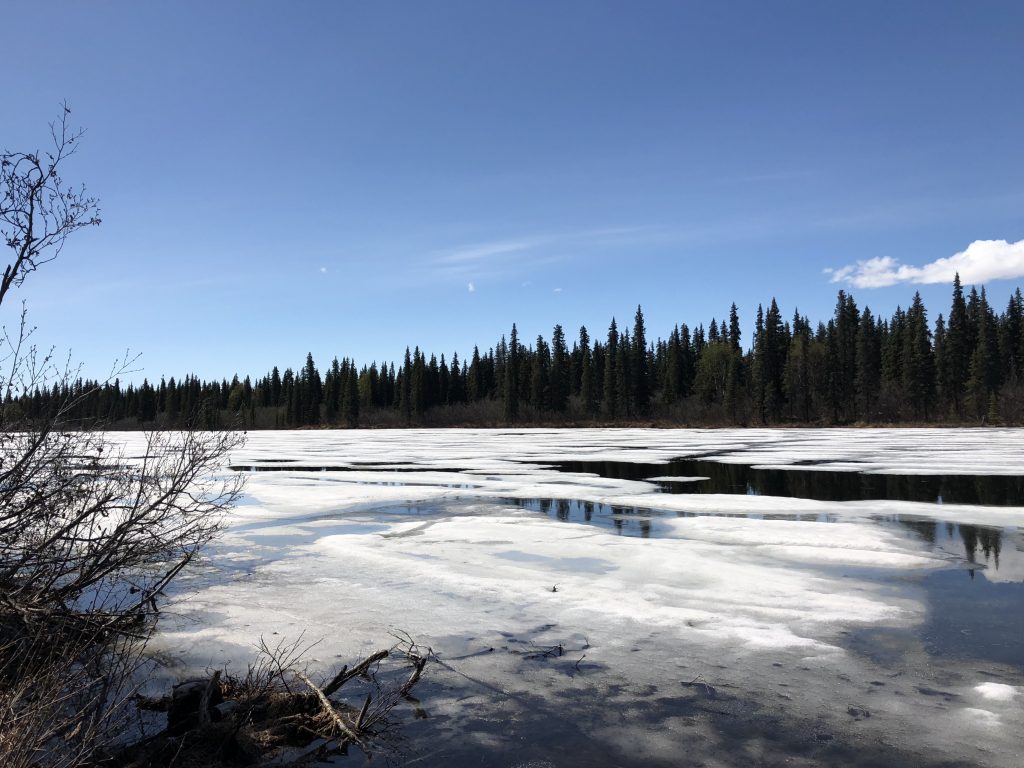 And some interesting things to see. 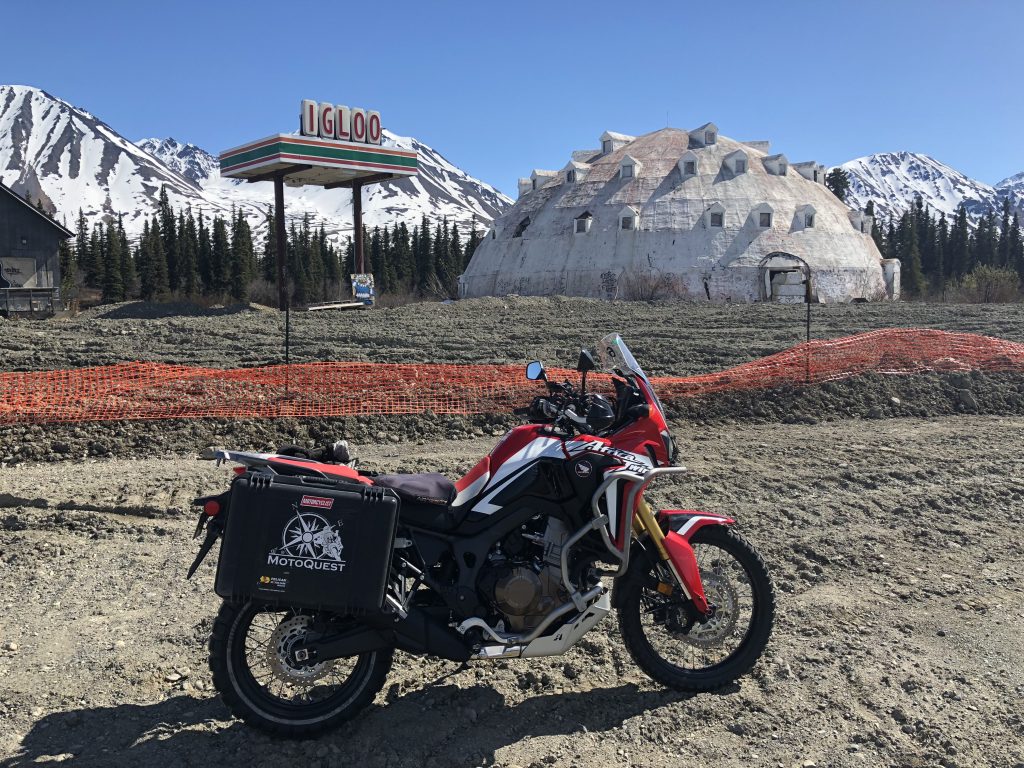 We pulled into the entrance to the Denali National Park for a quick pic, we’d be visiting there on the way back.  The next stop for fuel was Healy. Still on tar the traffic was lighter and there were some fun bends to be ridden and fantastic mountain and valley views we rode past because the bends were…. too much fun. 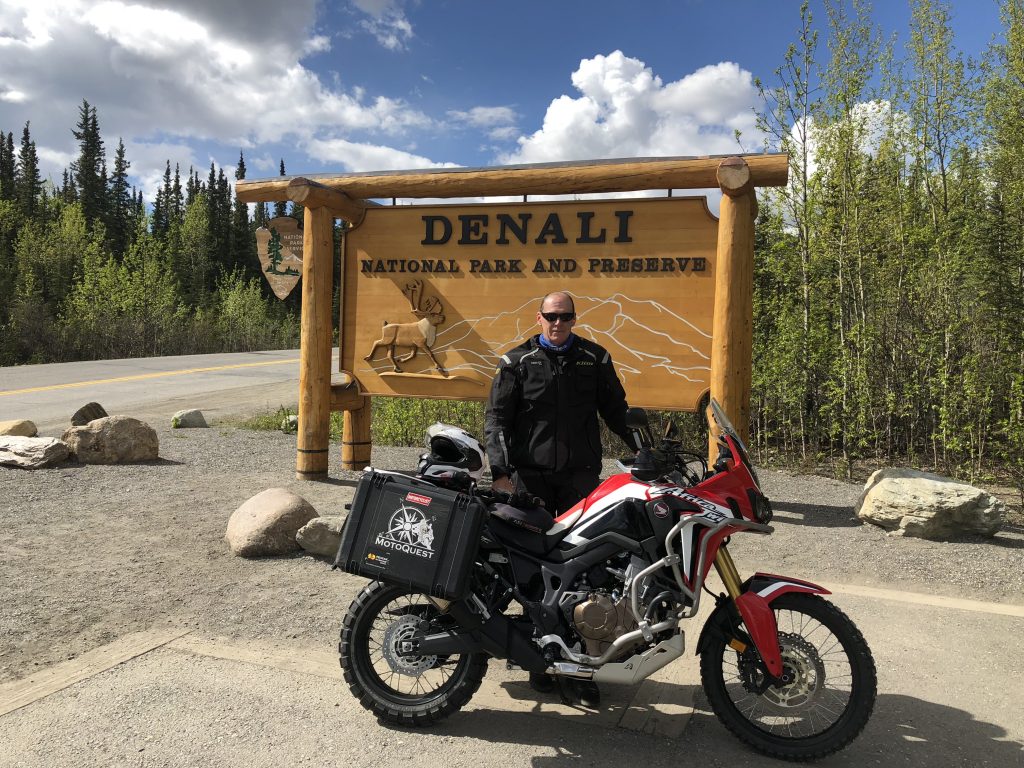 The night’s accommodation was at Pikes Waterfront Lodge, on the Chena River at Fairbanks. This venue has been used a few times as the start of the Iditarod dog sled race. Pikes Landing, a bar/restaurant next door that had a surprisingly waterfront resort feel was our choice for dinner. We ate, had a couple of beers and got to know our travel companions more as we watched the world float by, people hit golf balls into the water and waited for the sunset. Just kidding it didn’t set. 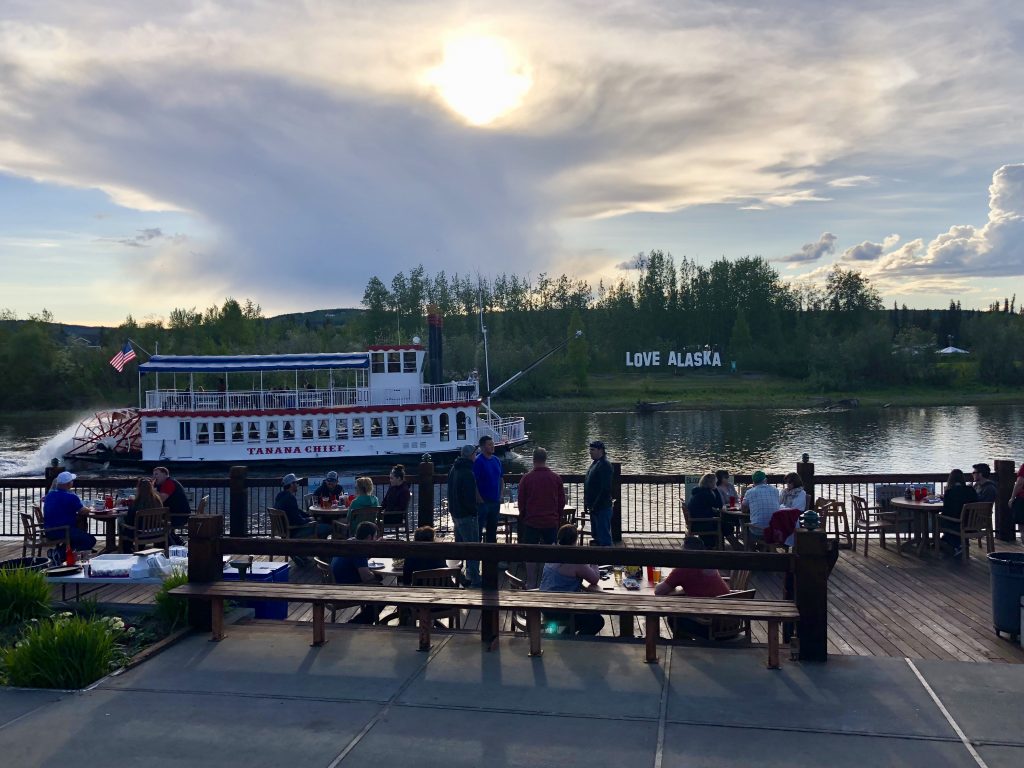 So to sum up Day 1 a decent distance for a late start. We rode some slab first and the rest was highway with some very nice views. There’s plenty of fuel and food available on this stretch of the highway north.