Last night’s planning session determined a 7am breakfast back at the restaurant after packing the bikes was the order of the day today.  The first thing I noticed was ice on the bike which confirmed why I needed the bar heater on in the room during the night. 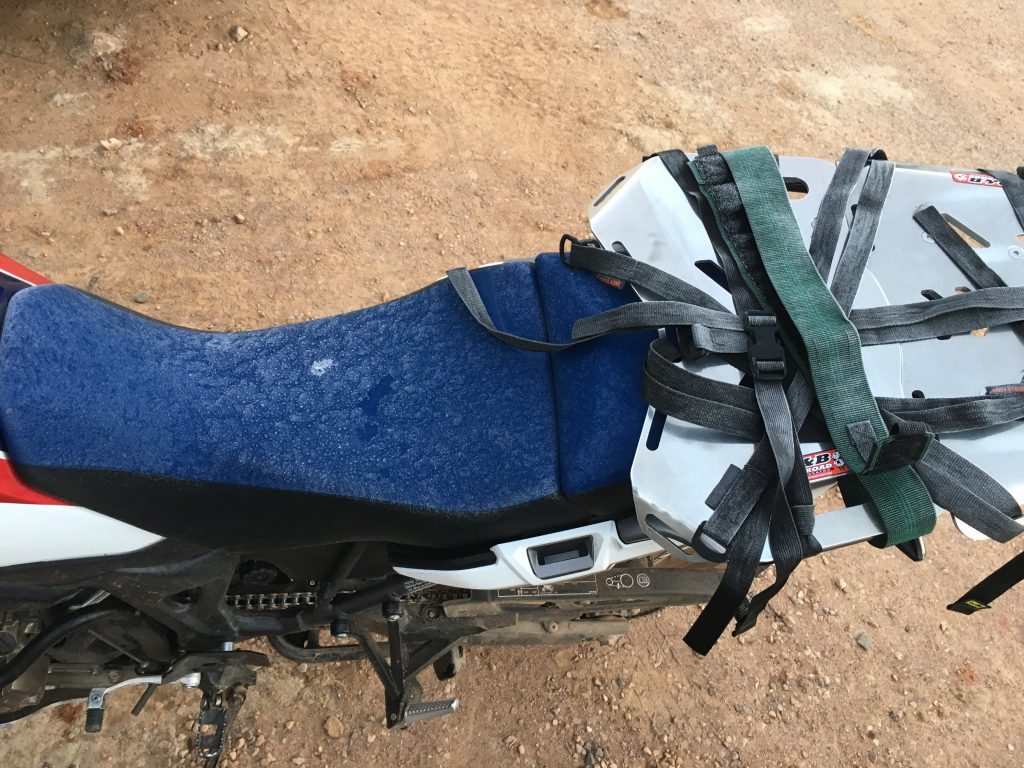 I’d advocated for a ride up to one of the lookouts and the other agreed we could meander up there on our way out of Arkaroola on the back road.  Things didn’t quite go to plan.  The road was a little gnarly which had nothing to do with Rod stalling it in 2nd as he came to an unceremonious halt.  The SW-Motech crash bars were a brand new addition to this bike and they worked a treat! 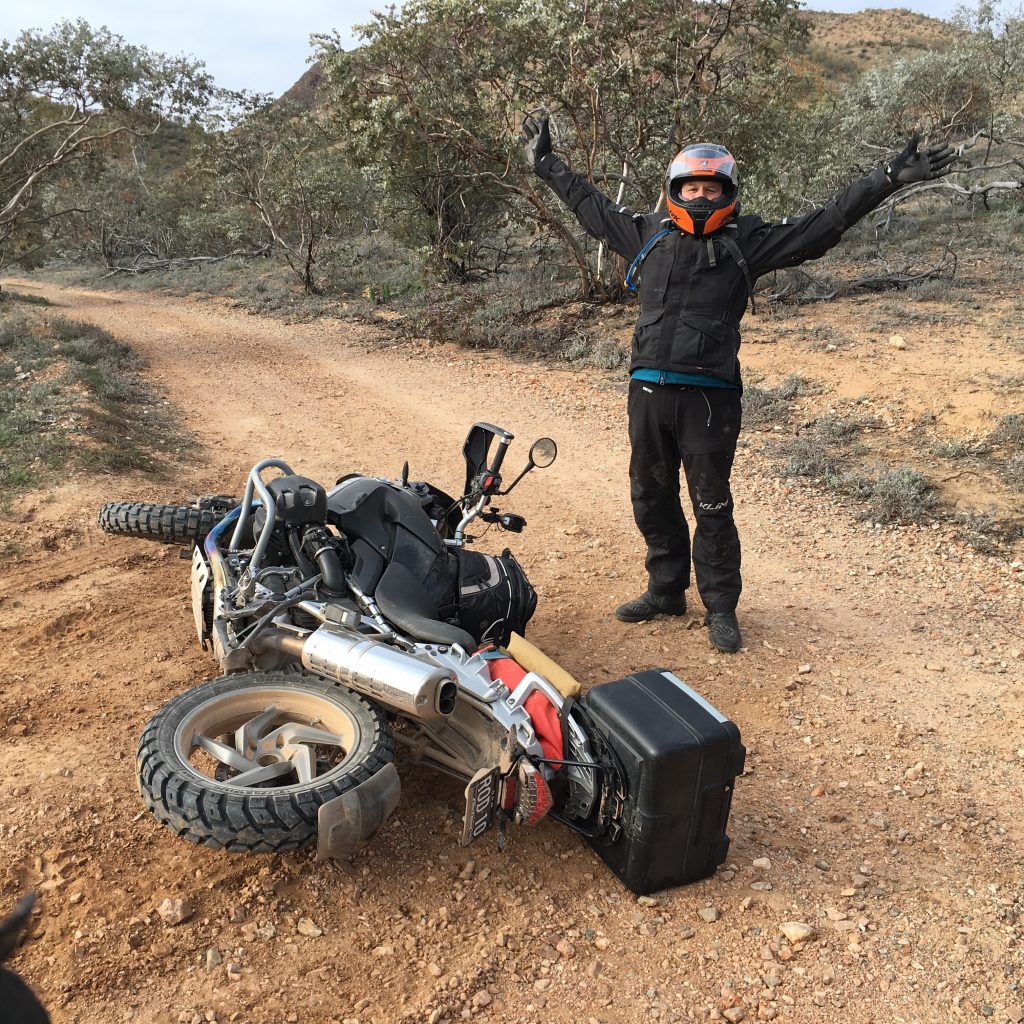 Continuing on towards the lookout I managed to stall the Africa Twin for the first time in the trip and Rob rode past me on the GSA.  When I caught him he was a the base of a very steep and long hill leading up to the lookout.  At the time Rod was already nearing the top and I wasn’t feeling confident at all.  I looked at Rob and after a deep breath off he went on the big GSA.  It was an admirable effort but ended like this 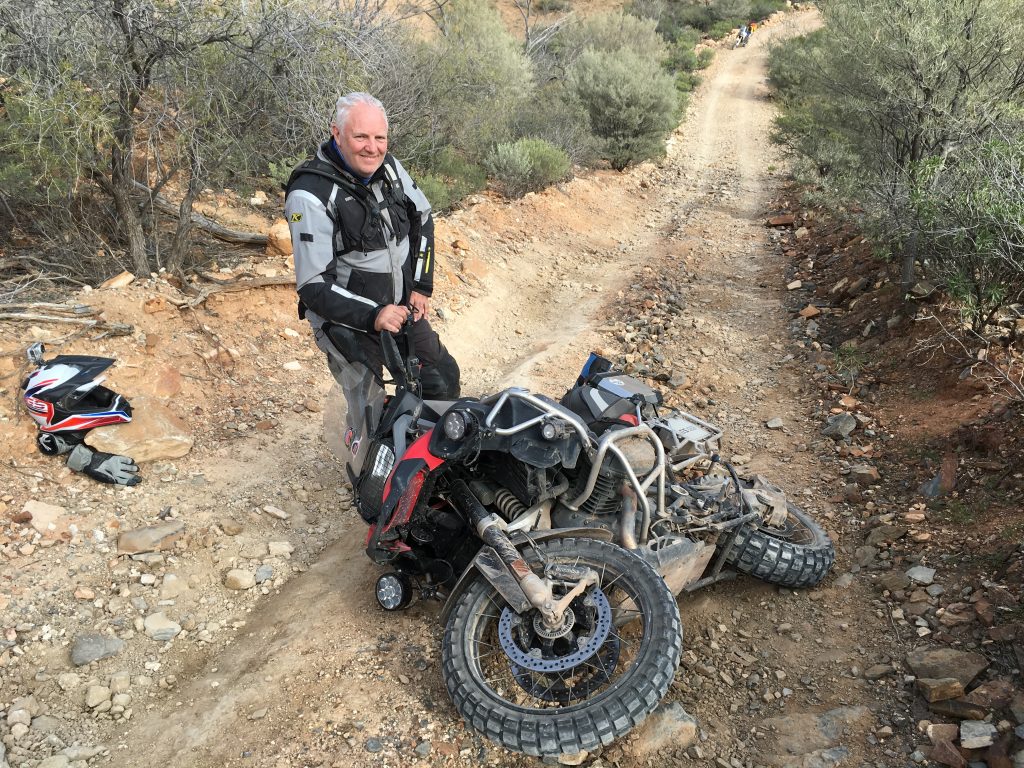 I parked the Africa Twin to walk up to help, Rod walked back down from the top.  The decision was made to turn the GSA around and head back down but first we laid it down and all walked to the top to see the view.  Now Rod and Rob reckoned the view wasn’t worth the effort but I disagree.  Here’s one direction that also shows the road we rode there on.

Rob and I walked back to his bike, righted it and he managed to get back down the hill.  It was a long, slow, difficult descent for Rod on the GS. I walked down and resisted the temptation to show both of them how easy it would be to get the Africa Twin to the top and back down (if someone else was riding it).

Rob’s GSA was blowing some smoke but fortunately it resolved while riding back to Arkaroola to execute the new plan that involved taking the main road out before heading to Copley.  We refuelled and sat for a while for drinks/coffee before heading back out towards the Gammon Ranges Road stopping for a quick pic at an interesting spot

and a drink and signpost shot. 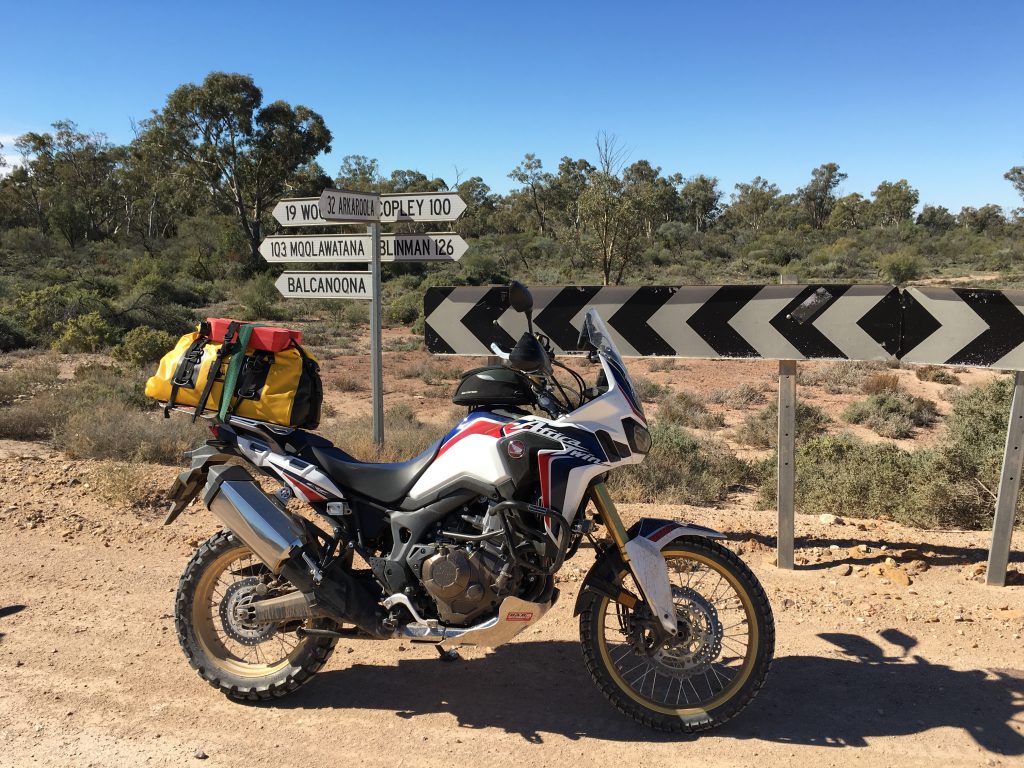 The ride between Arkaroola and Copley was great fun. Open good gravel interspersed with some hills and corners along the way, all simple stuff in another perfect cloudless day.  We stopped at the Cafe at the Caravan Park at Copley where Dave, the owner, and his missus cooked us a feast for our brunch which included about a kilo of baked beans to share. I showed Rod and Rob the picturesque Leigh  Creek Creek bed and we took the Outback Hwy north stopping at Lyndhurst for fuel and a photo at this end of the Strzelecki 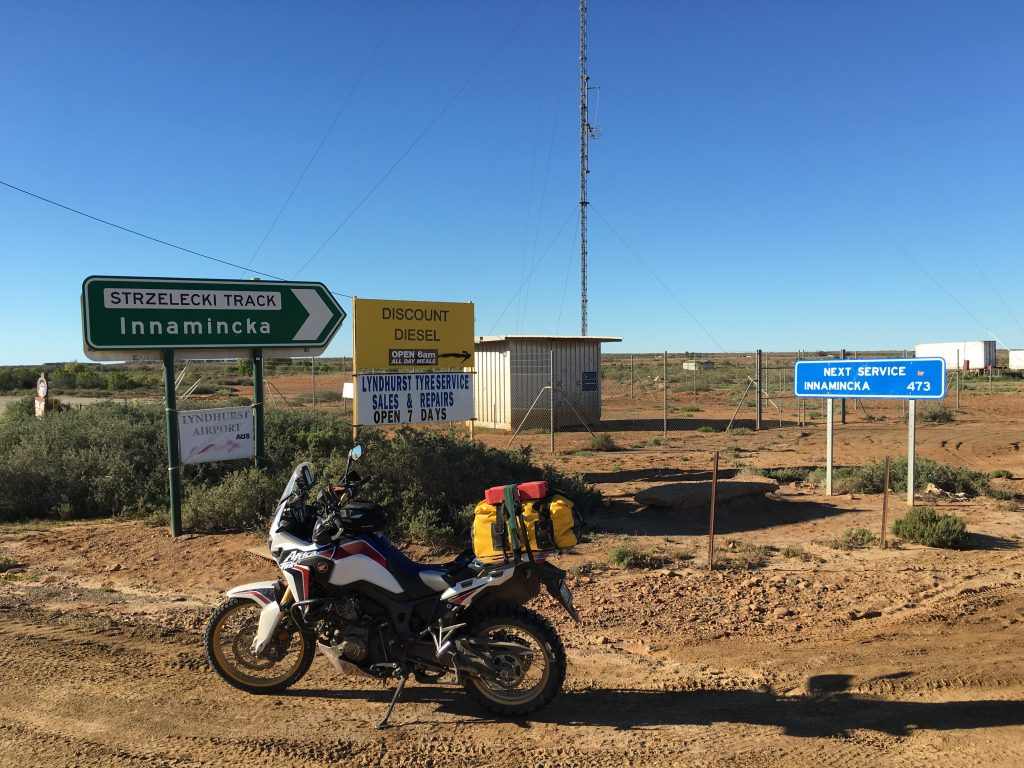 We then called in on the ruins at Farina for a look around. 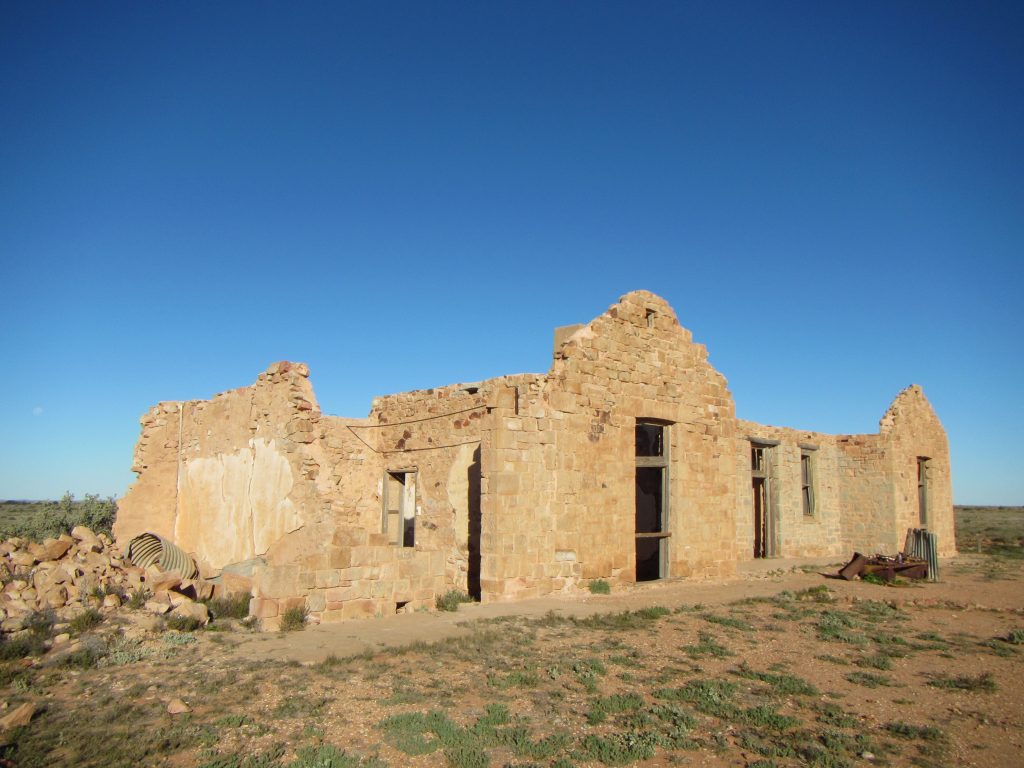 from Farina it was a short ride to Marree for fuel and a great night at the Marree Hotel. 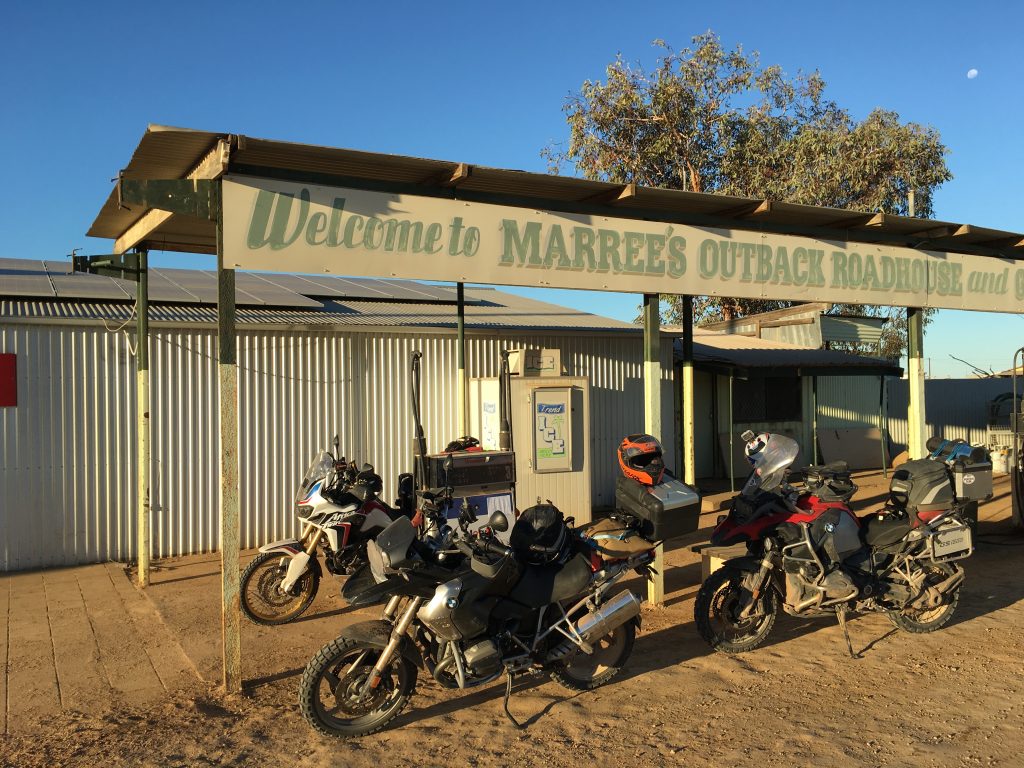 The plan for the next day was made, leaving in the dark to experience sunrise somewhere along the Oodnadatta Trak.