When I first read about the Yamaha MT-10 I was instantly elated at the prospect of twisting the throttle on Yamaha’s fantastic R1 crossplane motor on a bike I might be able to fold myself up on and ride. I have to say I got a little bit excited and couldn’t wait to take one out for a spin.  A scheduled service on my Africa Twin provided the opportunity.

The MT-10 has three stage traction control, three riding modes and for the test ride I had it set up in bog standard modes. It’s also got an “A” and “B” Modes (Aggressive and Ballistic maybe?). Changing the setup was easy and I was ready to ride. The first thing I noticed was the nice, but slightly tinny growl of the motor.  The second was the stiffness of the suspension.  While I’m much more used to riding long travel adventure bikes with 19″ or 21″ front wheels lately I reckon I’m safe to say that the suspension out of the box was a little too hard. However the multiple KYB front and rear suspension adjustments available might be able to sort that out.

I stopped for a quick look at the bike outside the Wollombi Tavern.  It’s a nice looking machine in grey and the green wheels – love them or hate them (one mate said it looks like a hairdresser’s bike but he says that about anything that’s not a H-D Dyna).  There are other colour choices, black with black wheels and blue with purple wheels.  I’ve seen them all and I prefer this one but no-one is going to pick their bike colour for me.  It looks mean and surprisingly small for a 1000cc machine. It does however use the R1’s deltabox frame and swing arm. 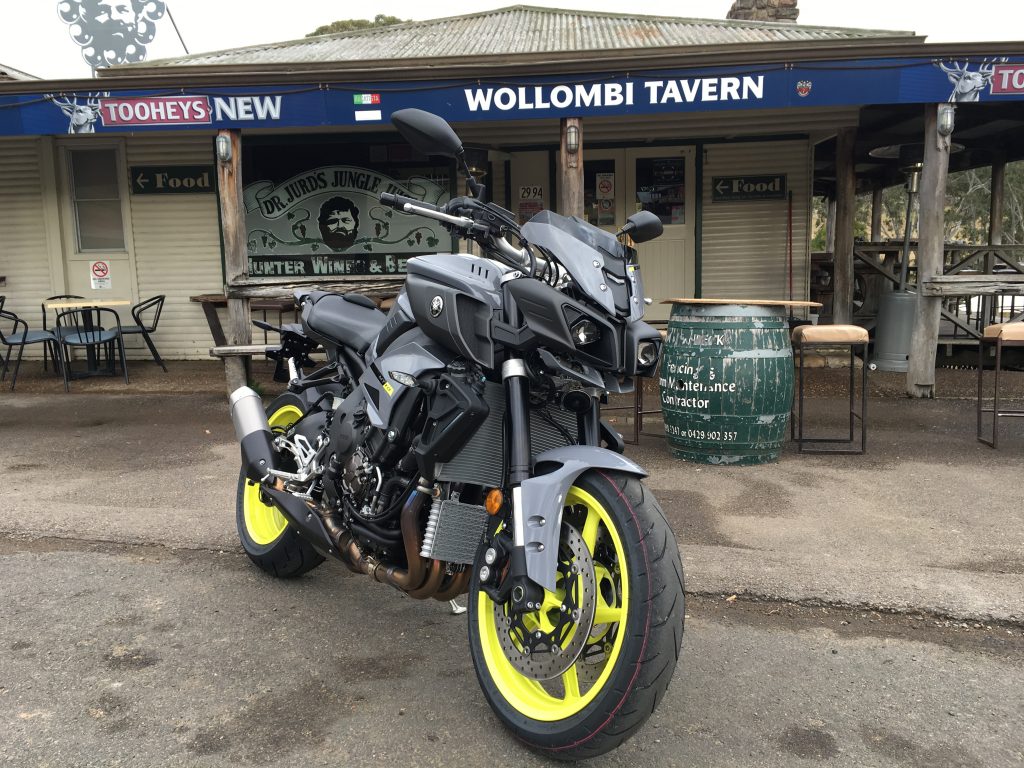 From Wollombi I rode south to Kulnura, there was a bit of moisture on the roads but other than a couple of hits in the kidneys on bigger bumps I was having a ball. I was reminded quickly how easy it was to get around corners on “sporty bikes” and this thing really tips in nicely.  It certainly doesn’t feel anything like it’s 210kg wet weight.

I was also extremely surprised how well the little screen and aerodynamics work to keep the air off you.  I’m in the mid 190cm’s tall and my helmet was in clean air but there was no buffeting on my chest or jacket despite the upright riding position.  My knee angle was comfortable and my size 15’s had no problem finding the gear lever and brake lever with the out of the box positions.  I can barely get my feet back onto the pegs of the R1.

And the motor, well it’s just a little bit nuts (he types with a grin).  They’ve made some changes to the current R1 motor for the MT-10 including dropping the horsepower from 200 to 160 with more torque the bonus. And if you look cockpit pic below you’ll notice the red line is 12,000rpm instead of the 14,000 on the R1. Peak torque hits at 9000rpm. 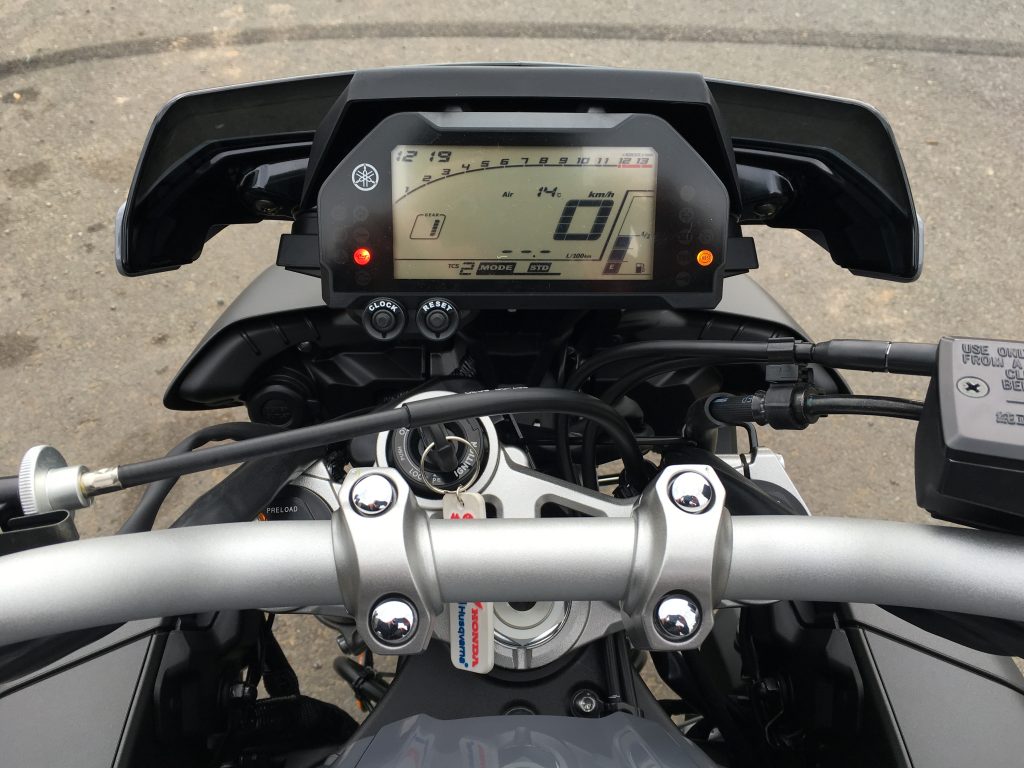 Twist the throttle and it just takes off, then you realise you can twist it a few more degrees and eeeha! Comparing it to the 160hp of my own lunatic KTM1290 Super Adventure which redlines at 9,500 rpm let’s say the MT-10 is gets to highway speed faster, with less gear changes and you need to hold on just a little bit tighter.  But you’ll need to get it and keep it above 4000rpm to maximise the fun or change to B mode to get the insanity down lower.  When changing down the assist and slipper clutch works really well if you need it.

Despite the stiffness of the suspension I didn’t have any problems with traction on bumpy bends at reasonable speeds. I tested out the brakes and the ABS and no complaints here.

I stopped at Jerry’s Cafe for a breather and some reflection over a coffee and an egg and bacon roll.  I also put some fuel in it which highlighted an instrumentation gripe. In the cockpit pic above you’ll notice the bike is showing half full.  Anything above half will show full until you are down to half.  So if you get on it and it’s reading full you might have a full tank (17 litres) or you might have six drops over half a tank. What genius thought that was a good idea? 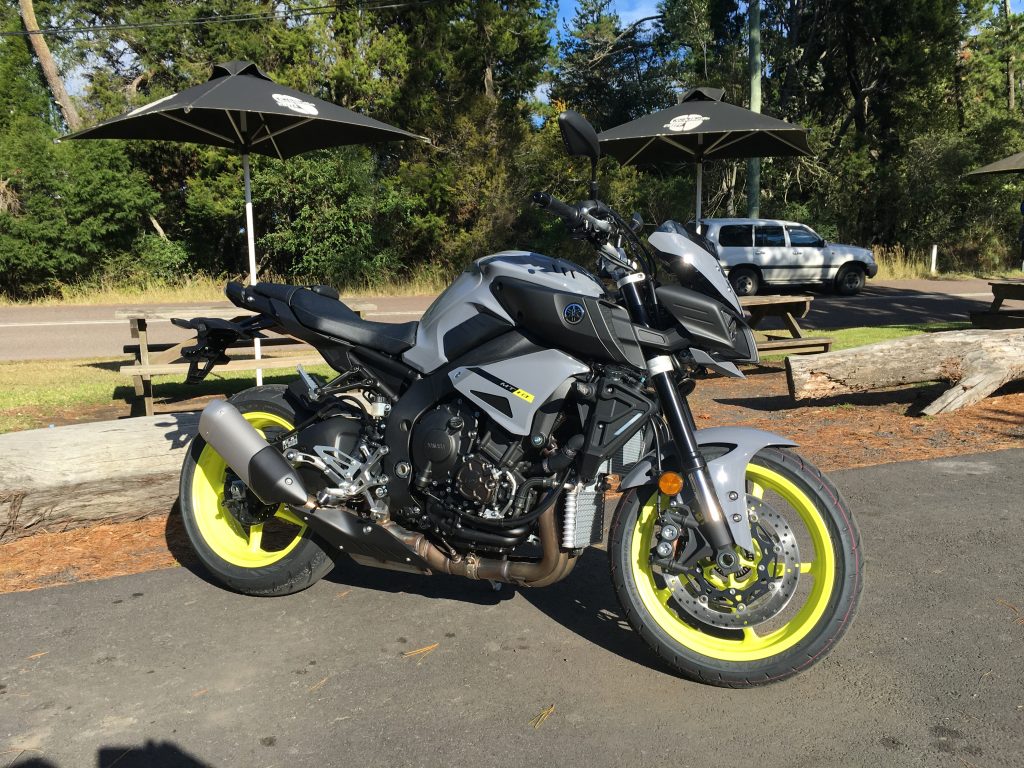 From there it was down Bumble Hill Road where it further proved it’s cornering credentials and then out on to the freeway for some cruise time.  The cruise control (standard) is easy to operate and works really well.  But out there on the slab at 110-120 kph (at about 5000rpm) the smoothness of the air flow was the absolute standout for a naked bike.

The day itself was quite windy but I barely noticed it. I was able to flick on the cruise, put my heels on the footpegs to open up the knee angle a little and just kick back and enjoy the road and the sound of the bike.  Above the usual cruising speed might require a little holding on or leaning forward for someone my size. But if you haven’t ridden a naked bike because of the perception of being out in the wind you should go and ride one of these!

If I stuck an airhawk on the MT-10 I’d have no problems banging out an Iron Butt ride on it the riding position is just that good. That assumes of course there’s room to soften the suspension in the adjustments available.  Touring? Probably not, luggage might be an issue. There are some OEM soft side cases and stays available for it if you have a lazy grand extra.

I jumped off the expressway and as always seems to happen to me I got to test its ability to stop at roadworks and idle.  No surprises there. 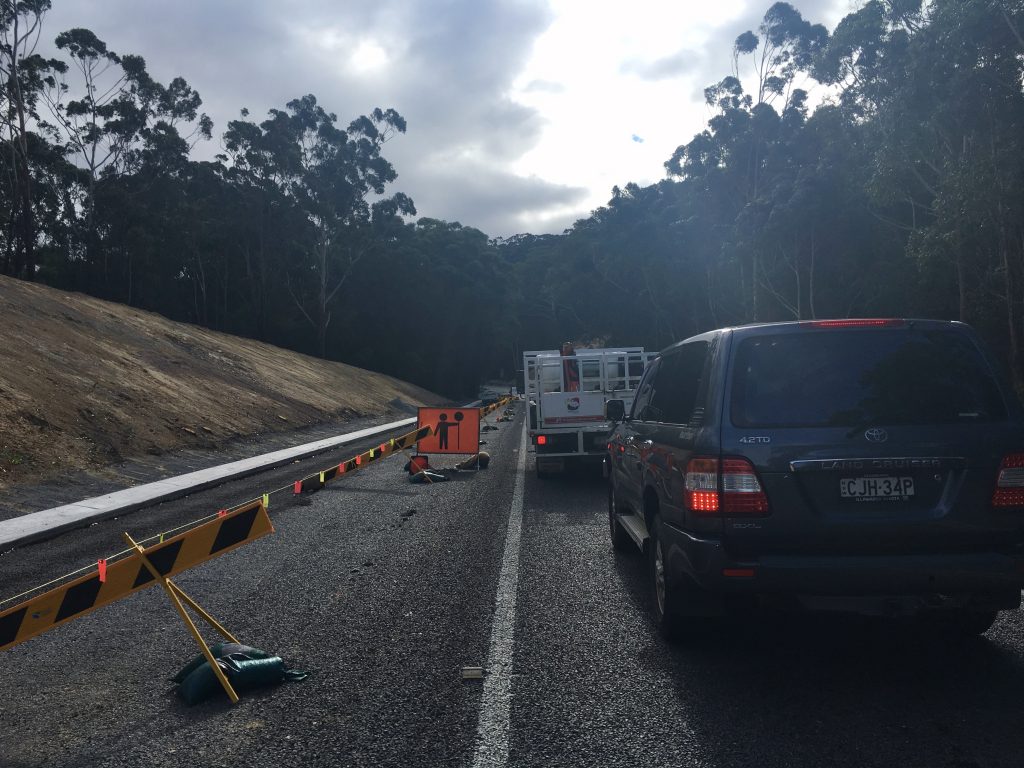 To tell the truth I was a little sad to have to take it back but I was happy to have ridden it on a bit of everything.  To say I am impressed with this bike is an understatement.  It certainly deserves a place among the crazy super-naked’s like the KTM 1290 Super Duke and the Ducati Monster 1200 but at only about $18k the money you’ll save will get you a long way!

So I’ve had my ride on the closest thing to a new R1 that’s not one. Awesome!