With the Iron Butt Ride to Parkes over and a great night socialising with a mixed bunch of fellow Iron Butt Riders we were to meet outside the Parkes Services Club at 7.40am for a group ride to the dish.  But first a breakfast of champions with TigerBill, Ox and Nevertire Nic. 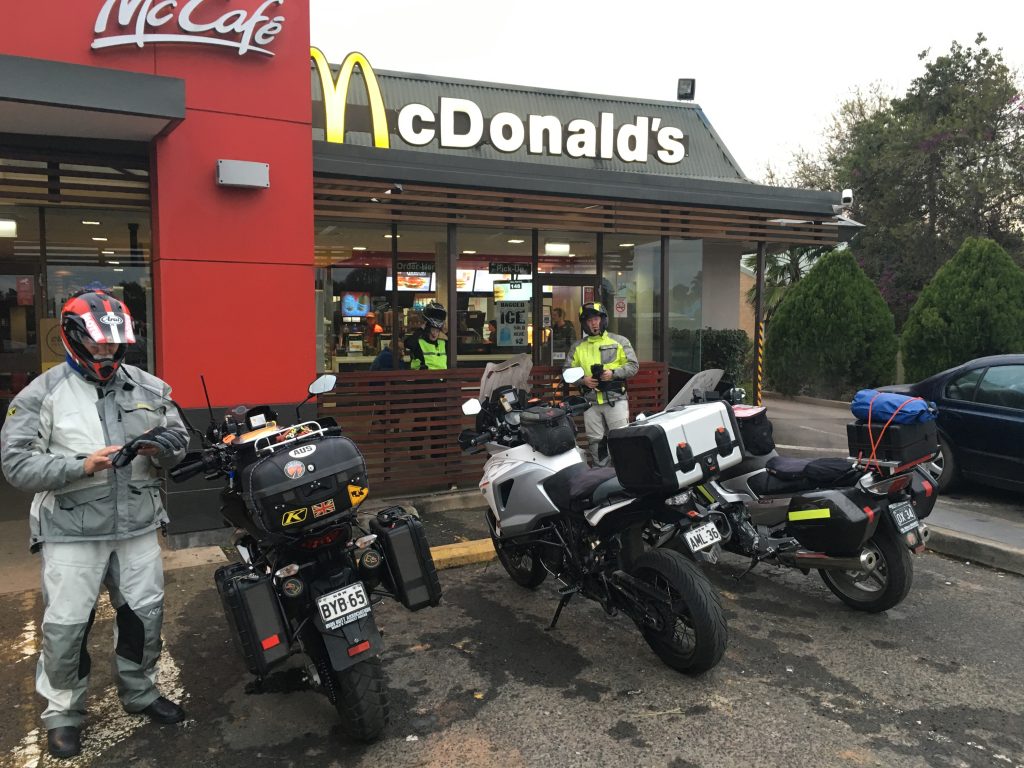 We arrived at the meeting place on time, there was a line of bikes there already and soon enough we were on our way for the 20k or so ride to the Parkes Radio telescope, famous for the reception/transmission of the first moon walk back in the 60’s. Here we are… 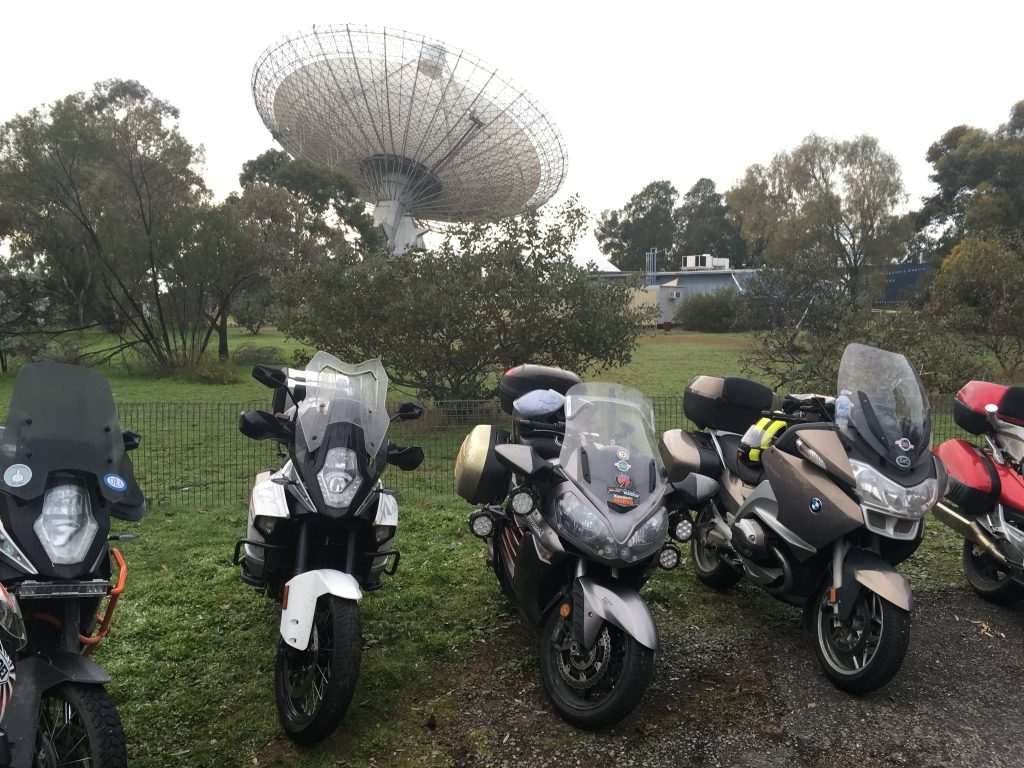 And another shot with the IBA Australia Banner. Everyone but that one bloke was taking photos behind me. 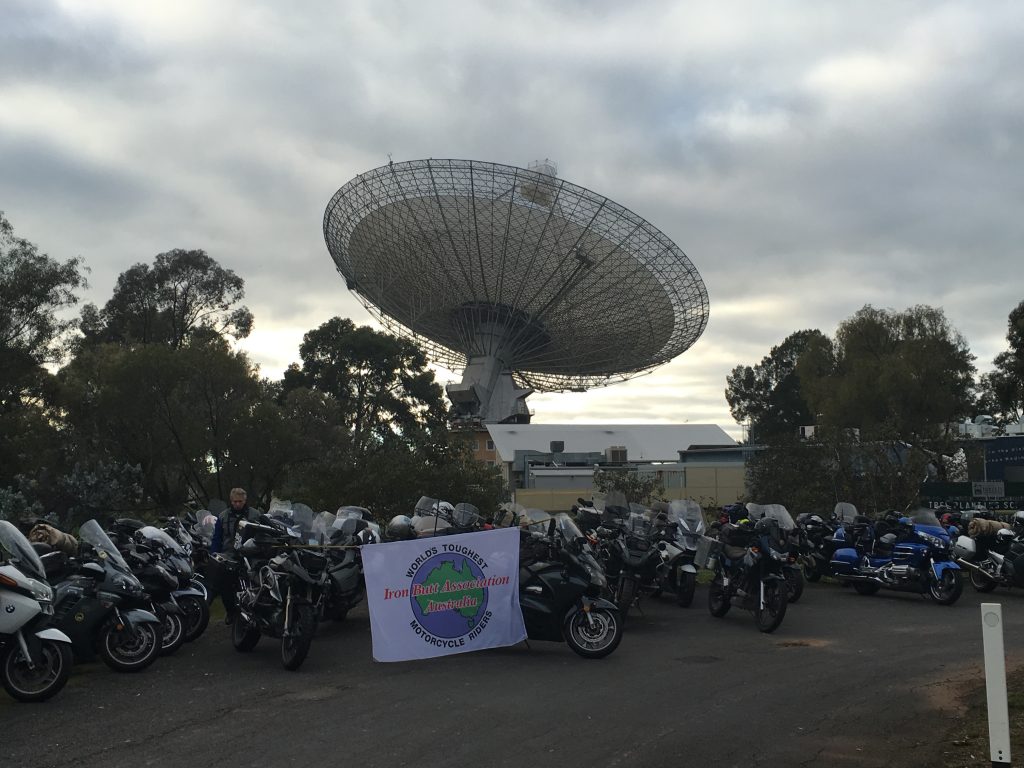 Tele on his nice BMW K1600GT, another Novocastrian, took up the offer to ride back with the breakfast team but as you’d expect the route was to be the most direct/boring.  So back into Parkes and a left turn towards Orange.  While I’ve come to accept being stopped by roadworks every time I head out, this doesn’t happen very often. 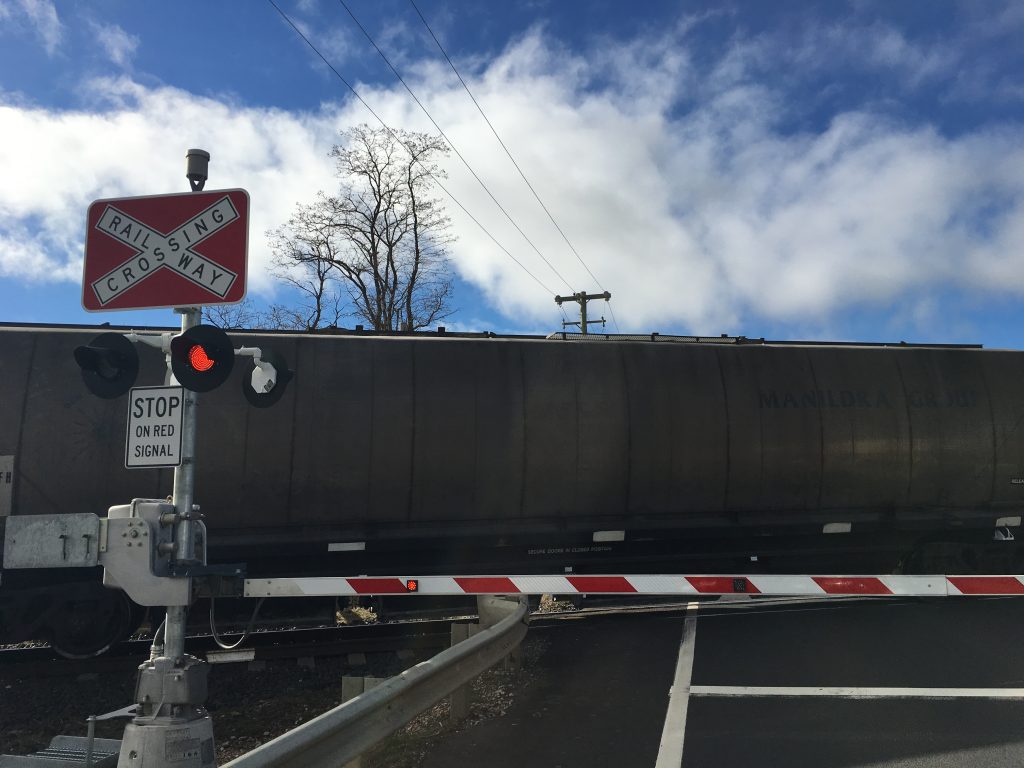 We put Orange behind us and rode on to Bathurst, taking a small detour to ride around Mt Panorama as a treat for Nevertire Nic.  Here’s Pit Straight

Ans here’s a selfie with a very poor view of the iconic “Mount Panorama” in white on the hill behind. 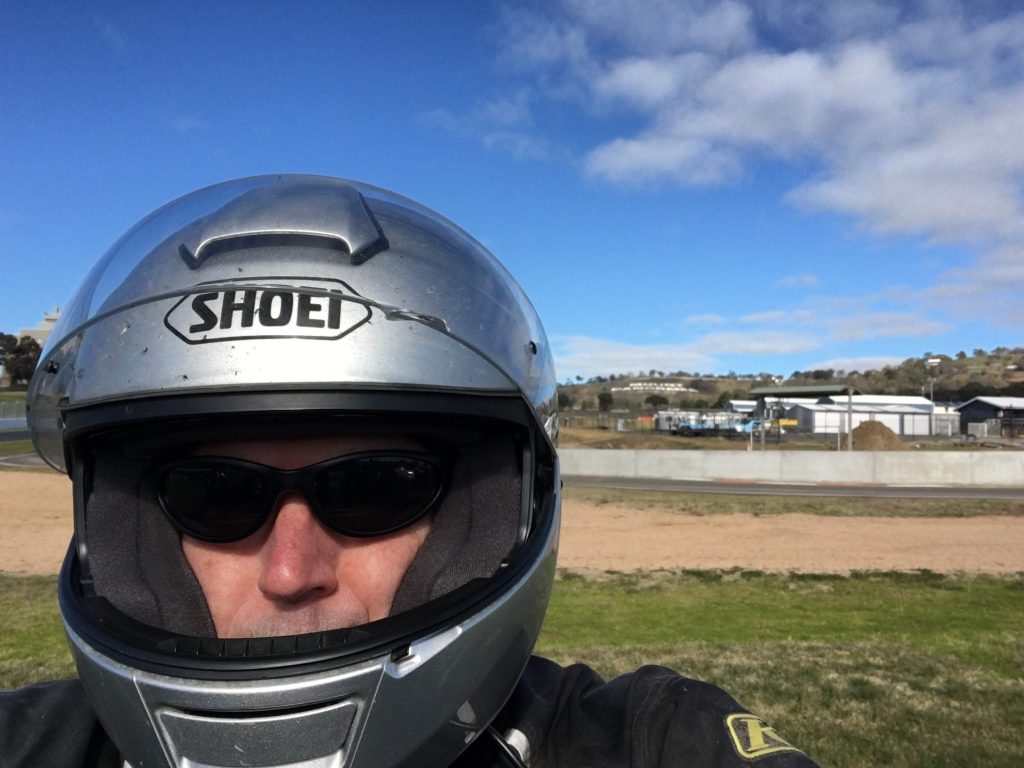 While in Bathurst a fuel stop was in order and Ox and Nic shouted Cherry Ripes – a favourite among LD Riders. Some iced coffee was consumed too. 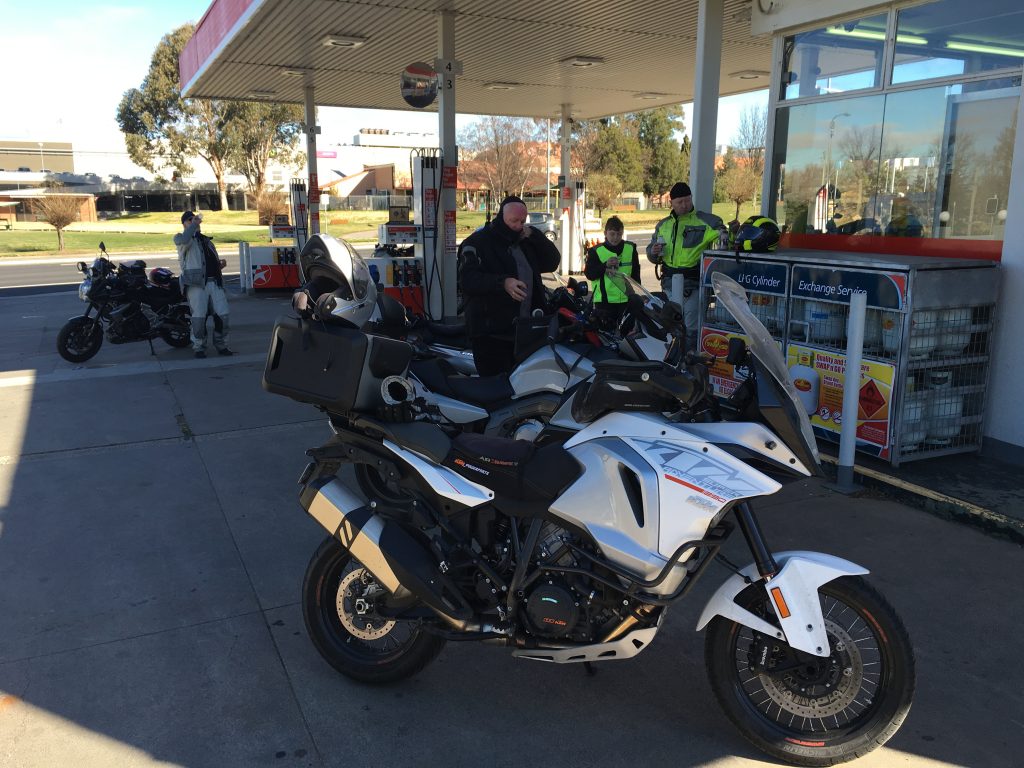 From there we rode through Wattle Flat, past Sofala and turned onto the Bylong Valley Way towards Kandos, where I stopped for a quick pic and waited for the others for a bit, they must have been caught up in traffic. 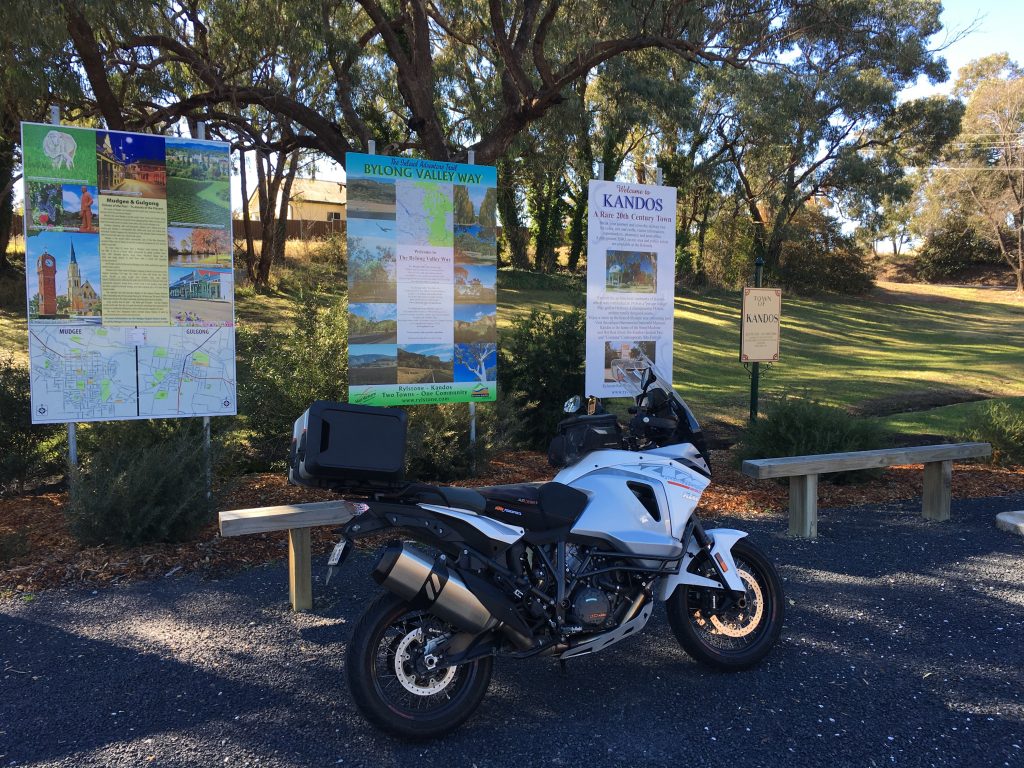 We stopped long enough in Rylestone to decide to have some lunch at Bylong.  The next part of the ride included some fun bends that the KTM let loose on. What a great bit of road!

A toasted sanga and coffee at Bylong General Store where Tele was a late arrival.  It seems he slightly overestimated the distance left on his rear tyre which was showing belt in one part and leaking air slowly.  While he ate and pumped his tyre back up I took a quick pic of the church there.

The section after Bylong isn’t too shabby either and the KTM and I railed through the two tighter sections and took some time out during one of them to try to snap a pic or two of the others as they rode past.

Tele needed to re-inflate his tyre near Sandy Hollow and again at Jerry’s Plains.  He decided he was fine to get to Branxton and we were all taking the Hunter Expressway so we said our goodbyes and the rest of the ride was uneventful.

A fun 550 or so k’s for the day on great roads with great friends!