Up t 4.10am I had organised to meet a group of riders who had stayed the night at Mt Seaview Resort for a blast up and down the Oxley.  With the KTM 1290 Super Adventure freshly first serviced, GPS wired in, Etrex and SPOT attached it was the obvious choice for the day.

I was a bit slow getting away, leaving home about 5.10am heading out into the pre dawn.  I’d made myself comfy, the Jett heated vest was on low, the heated grips were on medium and the heated seat was on medium which was enough to feel the heat through the airhawk.  Geez, Im getting soft.

There were a few showers about on the way past Taree but they were essentially gone by the time I took the Bago Road to Wauchope.  As I refuelled there a white FJR with blue checks on it was heading west towards Long Flat (and Mt Seaview) so I took a moment to send an SMS to the guys to let them know. There wasn’t much for me to do but leave a gap and head on up the hill.

I arrived at Mt Seaview about 10 minutes late and was told the guys had left. It turned out they saw the white FJR heading up the mountains and had made a quite correct decision to be in front rather than behind it.  I had a text that they were stopping at Gingers Creek so off I went.

The Oxley up the hill was wet but not slippery. Recently completed road works had improved the surface so while taking some care the speed limit was easily achievable and the fun factor not too dampened. It turned out I passed two of the group on the way up the hill and we all settled in for half an hour for a quick snack and a very decent coffee. 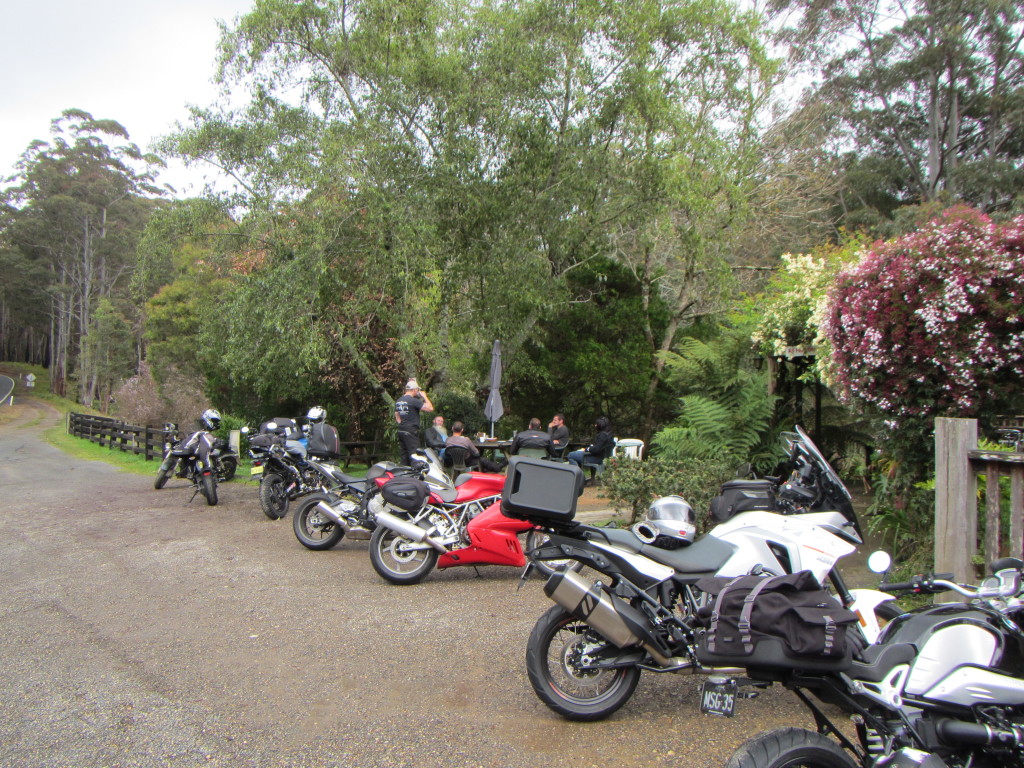 By the time we left there were about 20 bikes there, some coming in quite hot, one R1 particularly so, it was leaking coolant. On the way up the hill the FJR had been heading the other way. 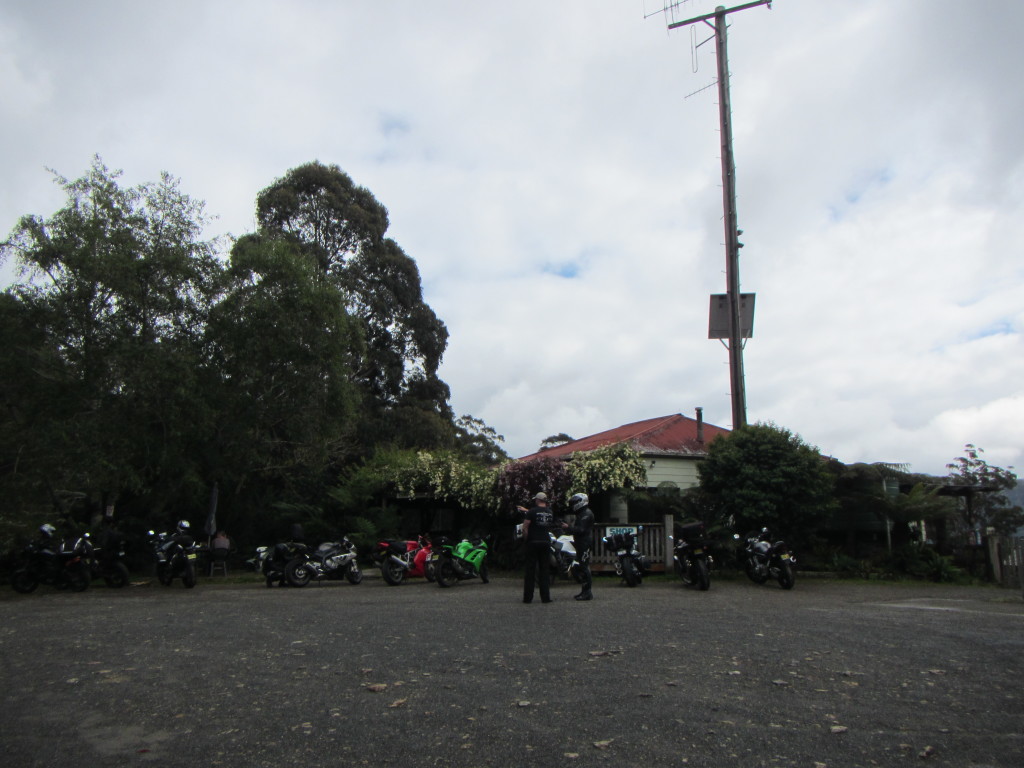 We left Gingers Creek for a “fun run” down the mountain to the end of the bends proper. I was riding with Humbussa on his Super Tenere, the road had dried out.  We had planned to stop and redo the lower half of the mountain so up we sent again, and down.  Woo Hoo ;-).

The plan was to regroup at Long Flat 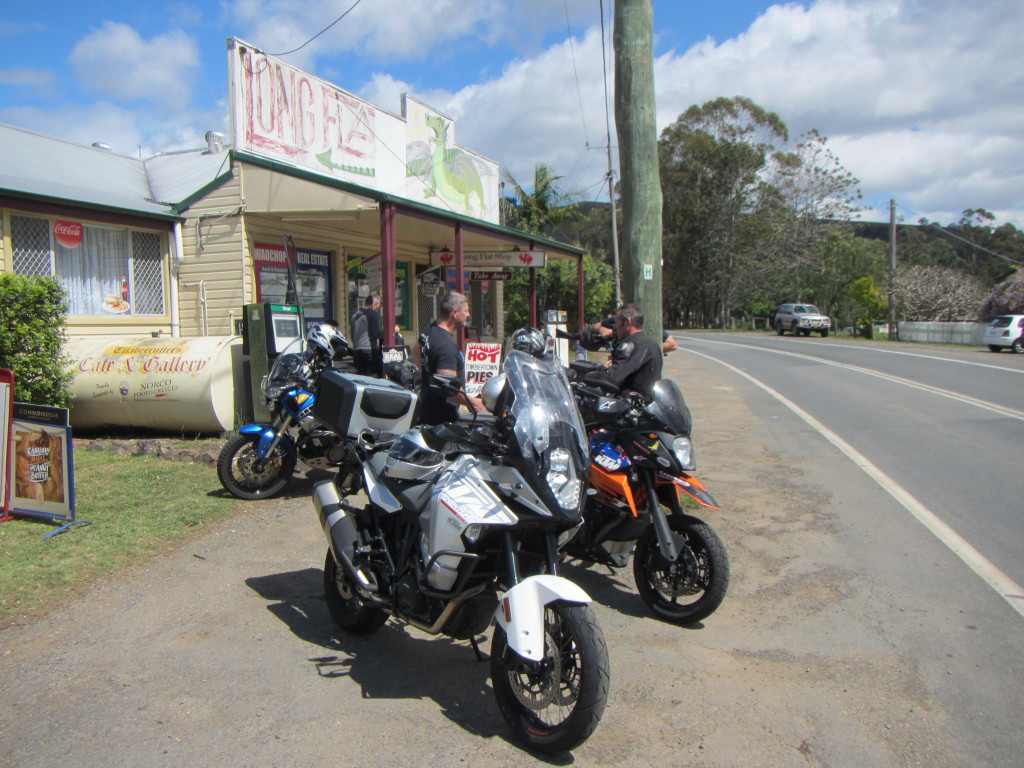 and then ride back towards Wauchope and take the turn off towards Comboyne for a meal at Blue Poles Cafe and Gallery.  I’d not been there before, a bit pricey but good food and coffee. 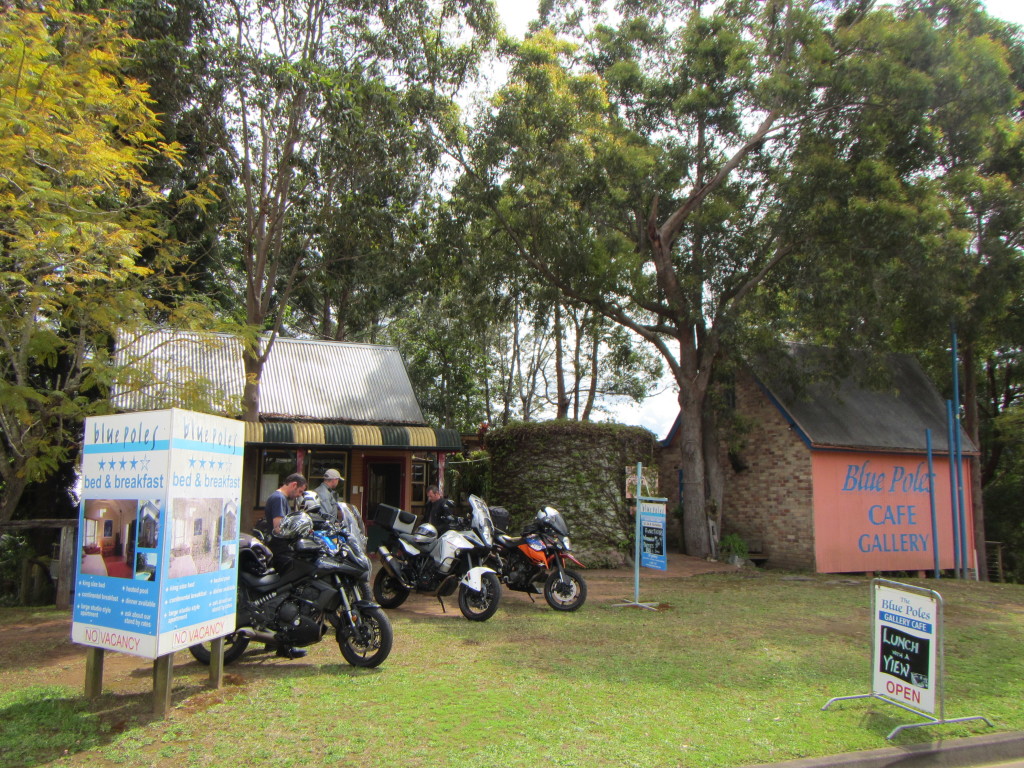 From there it was time to head towards Krambach and that took us into a National Park and onto some dirt roads.  I have to admit I wasn’t too excited about the route and taking my less than a month old Super Adventure into the gravel after it had been raining in the area for the last week or so. 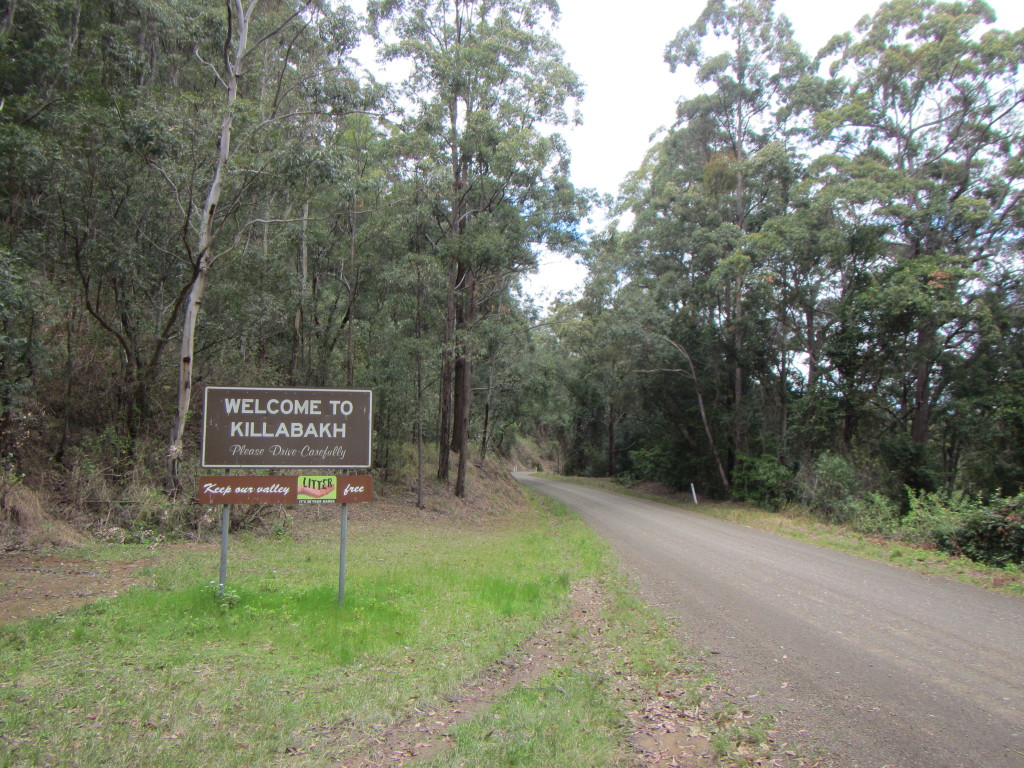 Anyhow, the bike ate up the gravel road and we made it through without any dramas.  At least I got to try out all the off road settings on the KTM, of which there are plenty.

After the dirt I swapped bikes with Humbussa who was keen to try out the KTM. We swapped back again before we got to Perenti at Gloucester for more coffee and tarts.

On the way out of Gloucester we were stopped for the second time today by one of these. 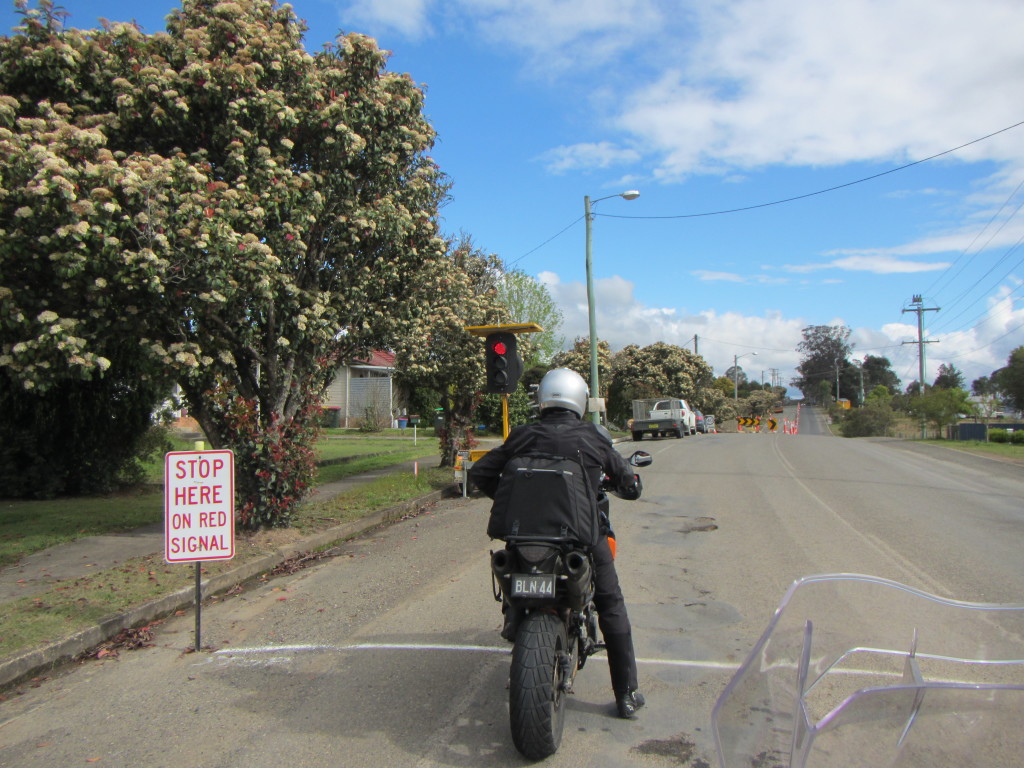 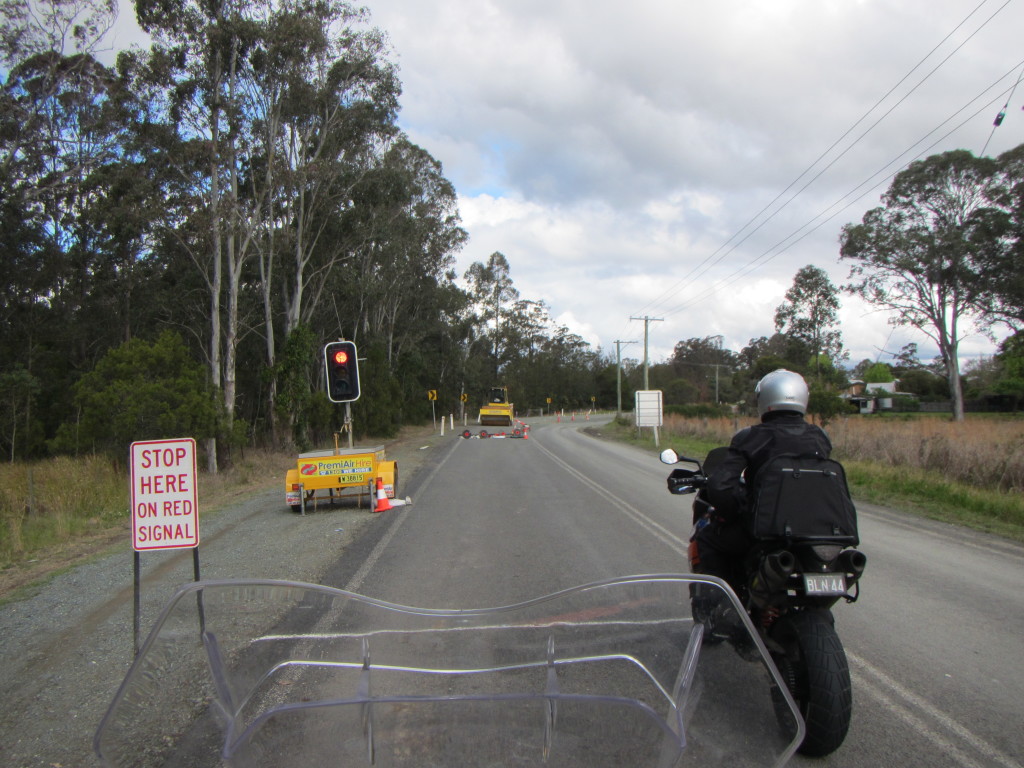 We turned off the Bucketts and went towards Dungog, then Paterson via some back roads to Morpeth and I rode sedately down the New England Hwy to home. 700 kms for the day and home by 4.30pm. Lots of fun riding with a great bunch of guys.

I guess the KTM will be up for a wash soon.