After spending a few days riding the Flinders, Arkaroola and Lake Eyre in South Australia it was time to head home.  The plan was to ride from Peterborough to Cobar yesterday, rest, and then finish the ride today. I admit it was a bit strange taking two days for that leg given I’ve ridden the total distance included as part of many day rides. but this was Adventure Riding not Iron Butt riding and I was settling into that concept just fine.

Rod and I left Peterborough just before dawn with a plan to have breakfast at Yunta. We were met with a spectacular sunrise over fog in the low lying areas of the plains in that area.  I’m usually riding into the sun at sunset going through here, it was nice to get the opposing view. 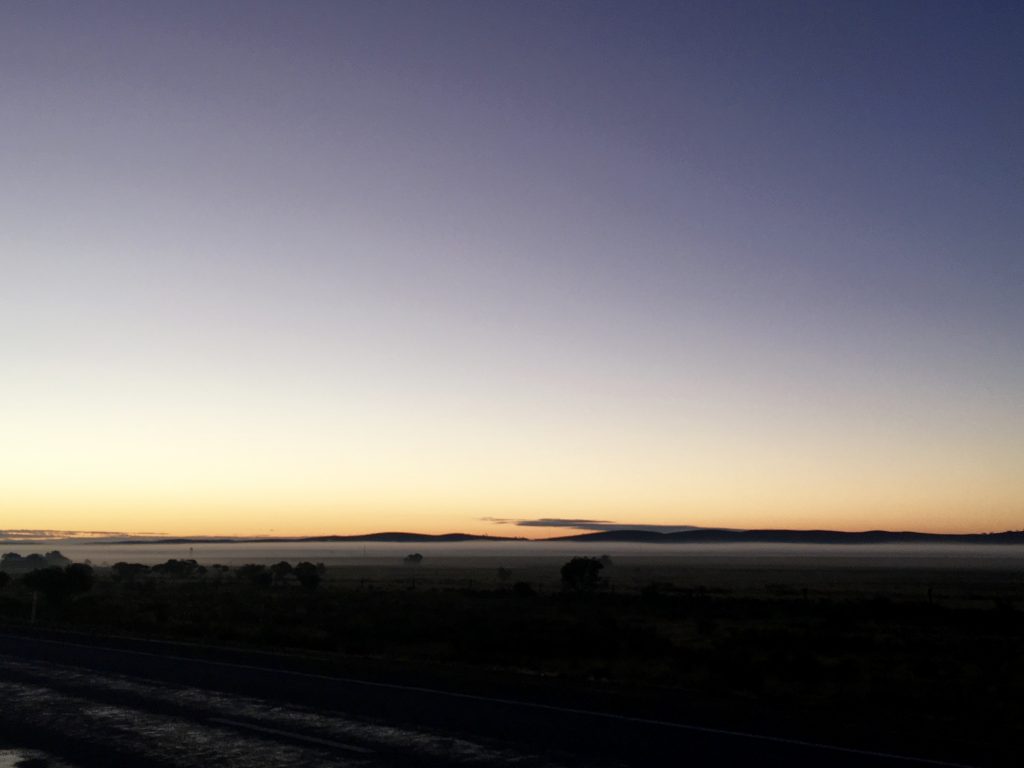 We left Yunta after taking our time over breakfast and enjoying the sight of a convoy of army vehicles that were moving about the area.

The next stop was Broken Hill for fuel and we took a ride out to Silverton Pub for a look. 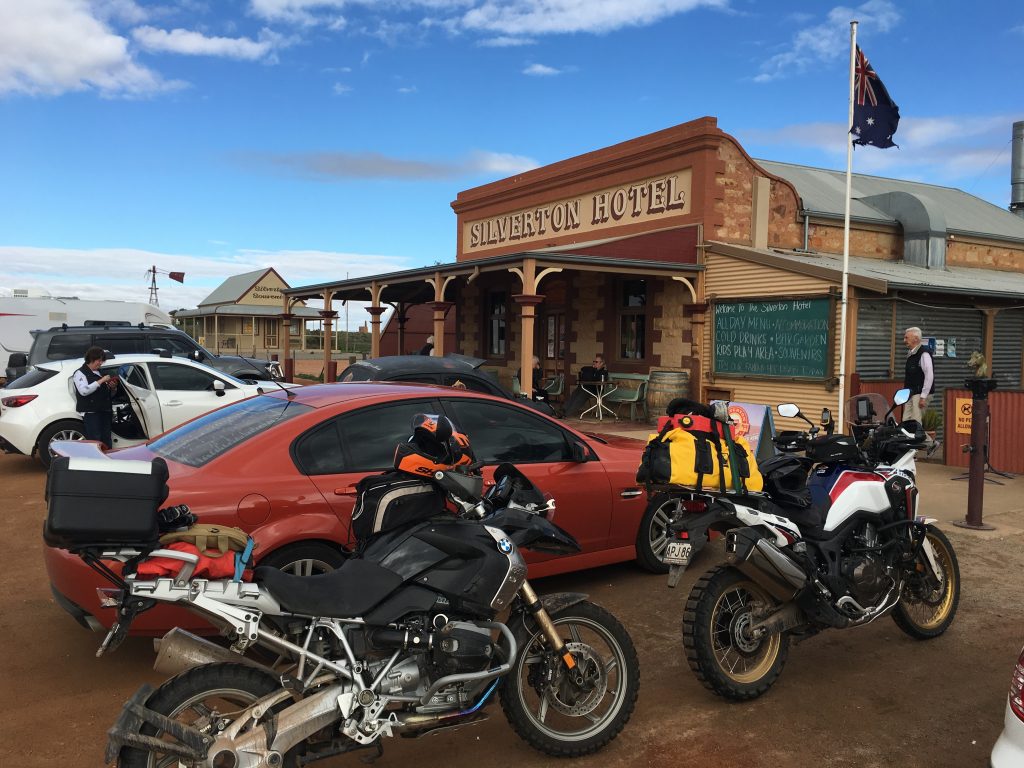 and then checked out the Mad Max II Museum.  $7.50 and well worth the cash if you are a fan. 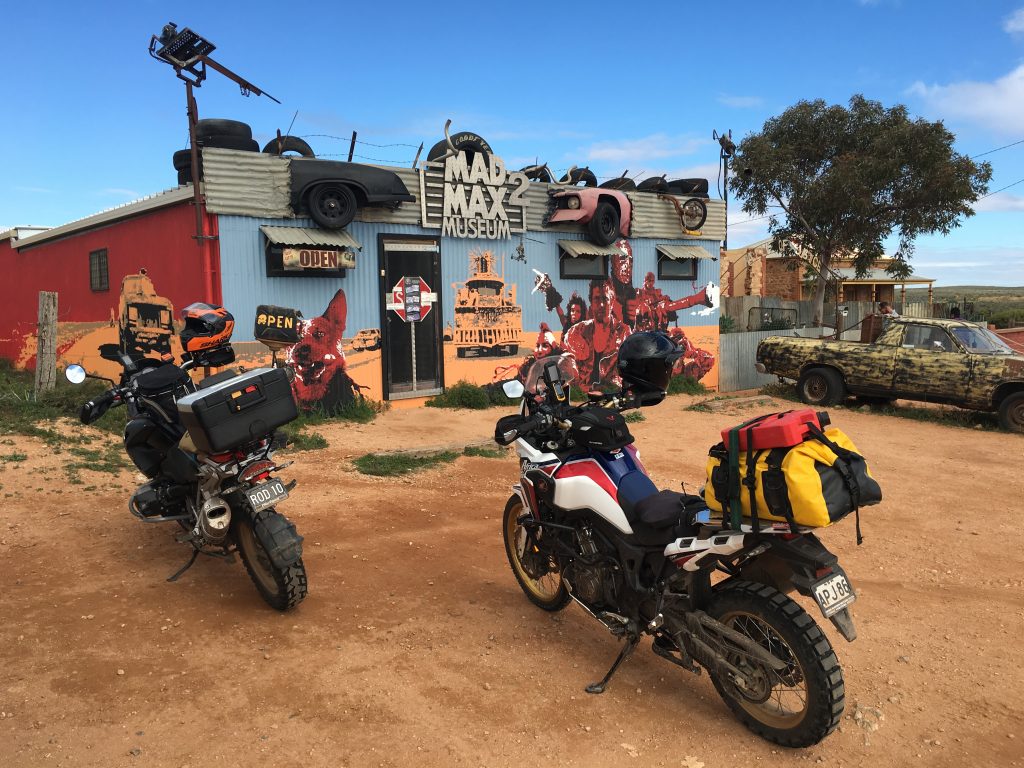 There’s plenty to do at Silverton, it’s on my bucket list for a return visit when I’ve got more time.

We topped up the tanks to the brim back in Broken Hill for the long haul to Emmdale Roadhouse.  The a was nice enough but we knew we were heading into rain at some point.  Approaching the MacCulloch Ranges I noted that I’d never seen it so green out there.  At the rest area in the ranges the small herd of goats that usually live there were nowhere to be seen, probably enjoying a feast of lush grass and happy they didn’t have to rely on the pipe from the sink to get water.  Here’s Rod at the rest area.  Here’s a tip, there’s Telstra mobile reception in this rest area.  Strangely there’s none at our next stop, the Emmdale Roadhouse. 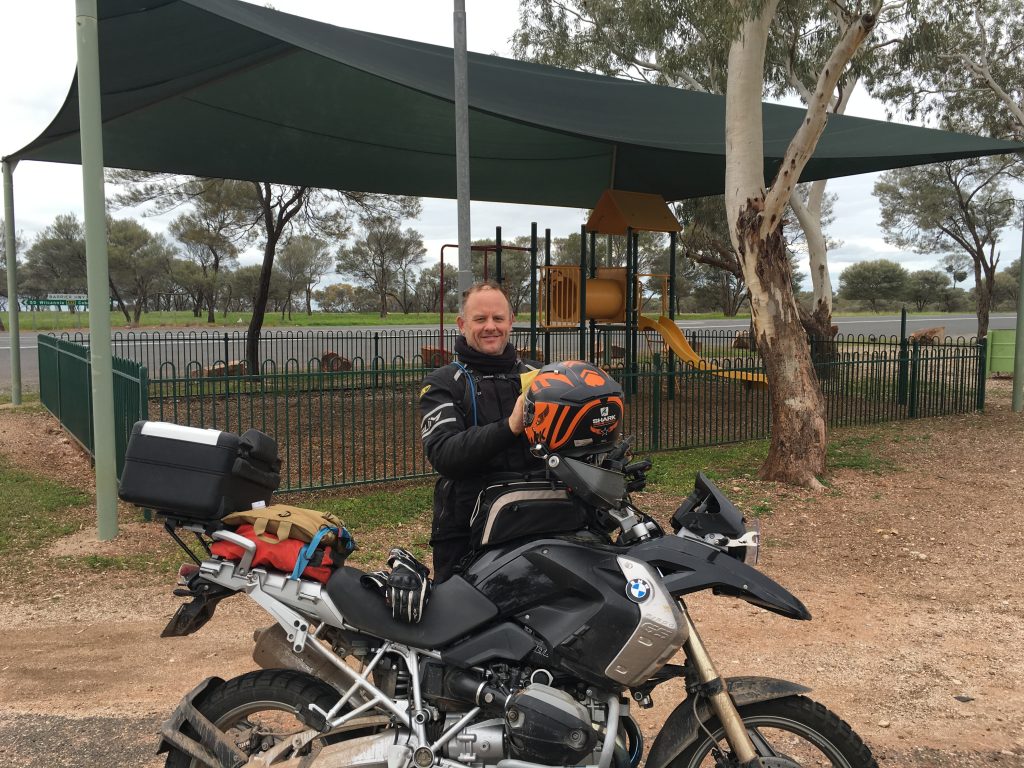 While stopped at Emmdale Roadhouse the forecast rain came so we battened down the hatches for the last 150 or so k’s to Cobar.  The rain wasn’t heavy but it was relatively constant and by the time we arrived in Cobar the light was almost gone.  We briefly considered pushing on to Nyngan but the combination of poor visibility and prolific wildlife made the decision to stay the most appealing.

We found accommodation in the Great Western Hotel in their basic motel rooms out the back for $80.00. After a quick cleanup and changing into dry clothes we had dinner in the dining room (Olivetto).  The food was a big surprise. Duck and Mushroom Risotto, Pork Belly and Chilli Prawn stir fry and a whole bunch of Italian delights to choose from.  Sensational food and country sized serves.

After that and some sticky date pudding it was time to return to the room and organise to get out the door tomorrow morning.  The weather forecast was atrocious.

The plan was to leave about 7am and we did, grateful that the heavy clouds in the sky were retaining their load while we packed our bikes.  A quick stop at the old mine at Cobar for the only pic for the day. 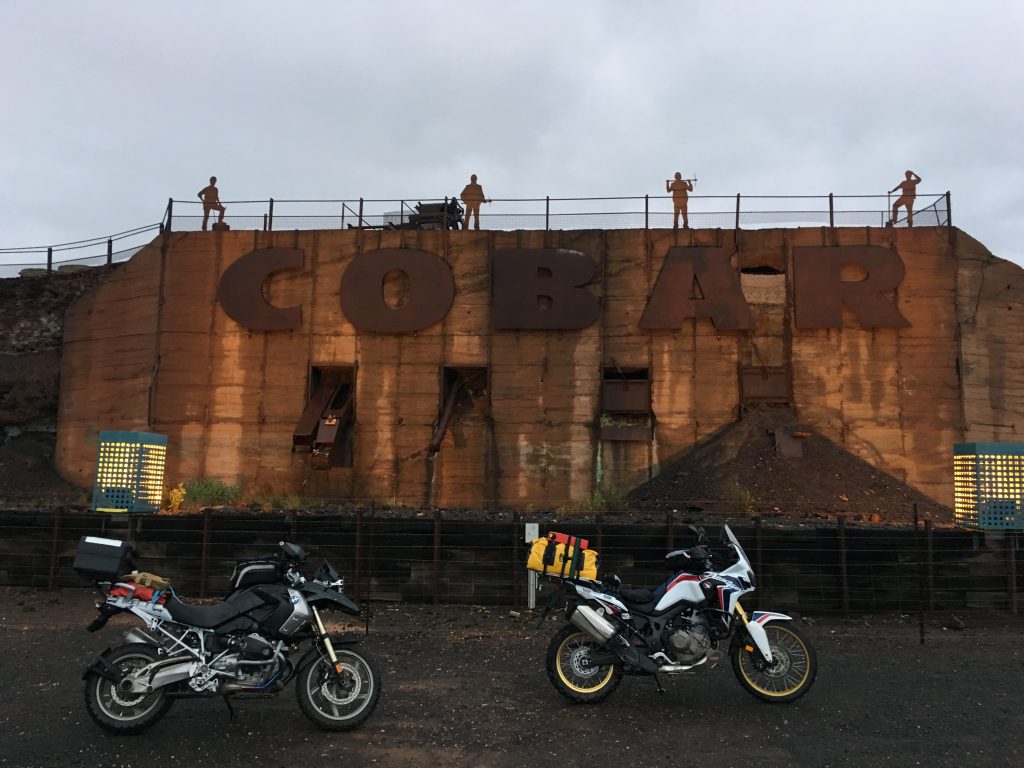 The road to Nyngan was wet but no real rain came until we were just arriving at the BP there for breakfast.

Rod and I were going our separate ways at Nevertire, I was heading to Gilgandra and back to Newcastle, Rob was going through Dubbo and heading further south before turning towards Sydney.  But breakfast first. Bacon and Egg Rolls were ordered and for some unknown reason they were delivered with a bonus side of chips! The BP Roadhouse used to have a tin  to hold a gold coin donation for an instant coffee.  The donations went to local charities.  The coffee is still available (free) but the donation tin is gone because it kept getting stolen, even when it was chained down.  There are some real mongrels about aren’t there?

Rod and I took our time debriefing the last five days and getting our heads ready to take on the next 500+k’s in rain.  It was still raining when we left Nyngan and after I turned left at Nevertire I rode into sheets of water falling from the sky and running across the roads.  The usually completely reliable Klim Latitude suit gave up the waterproof ghost and the Tech 7’s aren’t waterproof so I spent some time enjoying the cold sensation of the water making it’s way around my body.

By the time I got to Gilgandra I was drenched and the boots were full of water so I filled the bike and just kept going.  The constant rain was with me through Mendooran, Dunedoo, Merriwa and my next, and last, fuel stop at Denman.  I took my gloves off and water ran out of the inside of my sleeves, it was hilarious!  It was cool (17 degrees) but not overly unpleasant.

The rest of the ride through Jerry’s Plains, around the Singleton Army range and down the Hunter expressway brought no surprises and I just got it done with my mile munching head on.  I arrived home about 3.30pm, it wasn’t one of the best days on the bike but certainly wasn’t one of the worst.

The Africa Twin with the offroad tyres didn’t provide any nasty surprises in the wet and at least I don’t have to clean off all the mud and dirt deposited on it in the Flinders a few days before.