Once you make it to Deadhorse Alaska there’s only really one thing you can do other than leave. Visit the Arctic Ocean on the top of the world (according to Trumpsters that is). Deadhorse is the town, Prudhoe Bay is a huge oilfield, so to get to the water you need to take an organised shuttle after providing your passport and other details to pass whatever security checks they do.

The shuttle tour was really interesting, the description of how the oil fields and drilling rigs work and move about was an eye opener. Seeing the facilities the oil companies make available to the FIFO workforce to try to make working in such a remote and hostile environment tolerable was an eye opener. It’s so hostile up there they had to make their own National Forest.

Some of us had thought a swim a might be on the cards but we were in for a surprise. Despite it being the first week of summer the Arctic Ocean was a sea of ice. We walked up the narrow spit of land that separated the bay from the ocean and looked at each other wondering what to do next.

It was clear we weren’t going to get our feet wet. There was nothing else for it. I stepped gingerly out onto the snow covered ice and walked on the ocean. It felt solid enough and then it was on. Rob and I were bombing, ice swimming and diving. Here’s Rob about to plant his face in it 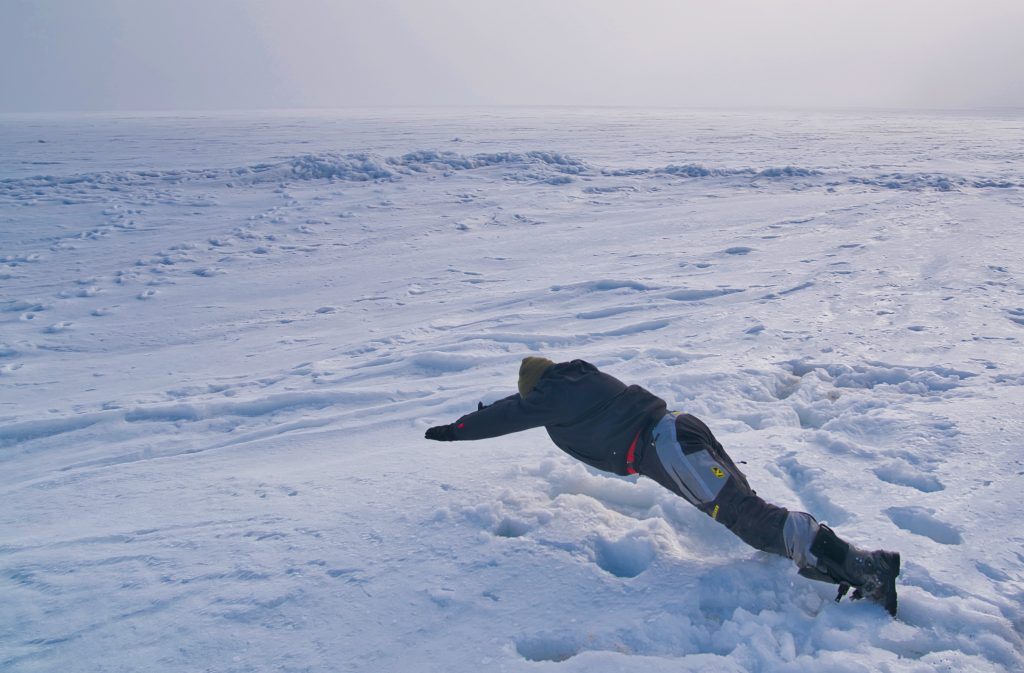 and me doing backstroke on the white stuff while the rest of the tour were standing on land considering the sanity of Australians. The KLIM gear came in handy! 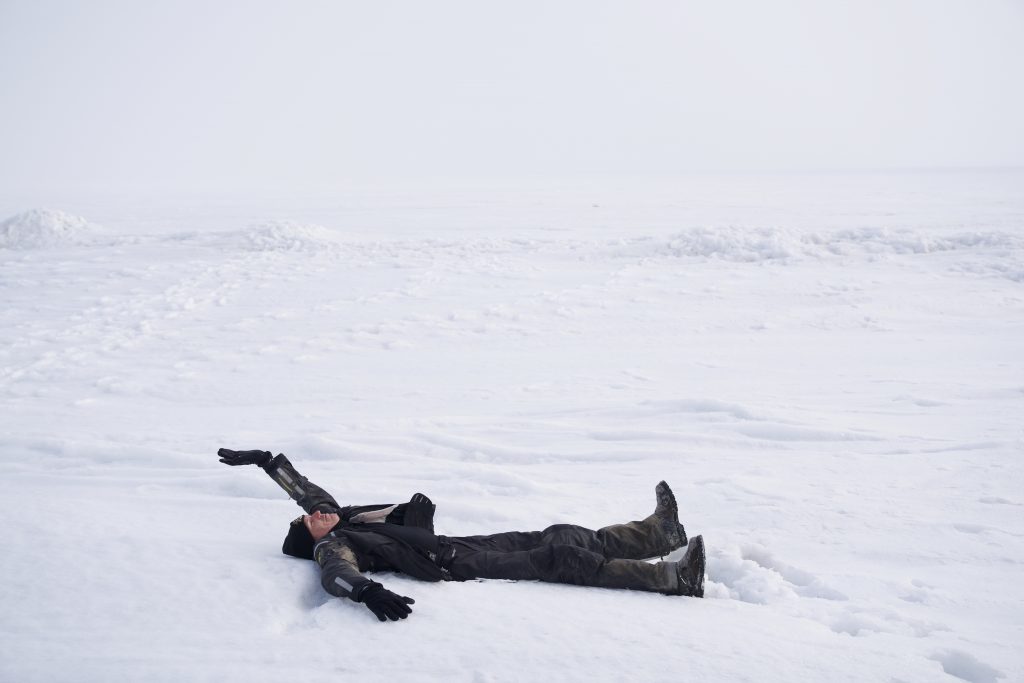 We’d made it to the top and we were going to celebrate! Rob broke out a flask of some warming honey flavoured fluid you can’t buy in Deadhorse and we toasted achieving our goal.

About 9am it was still  0°C back at Deadhorse Camp as we packed the bikes ready to go. 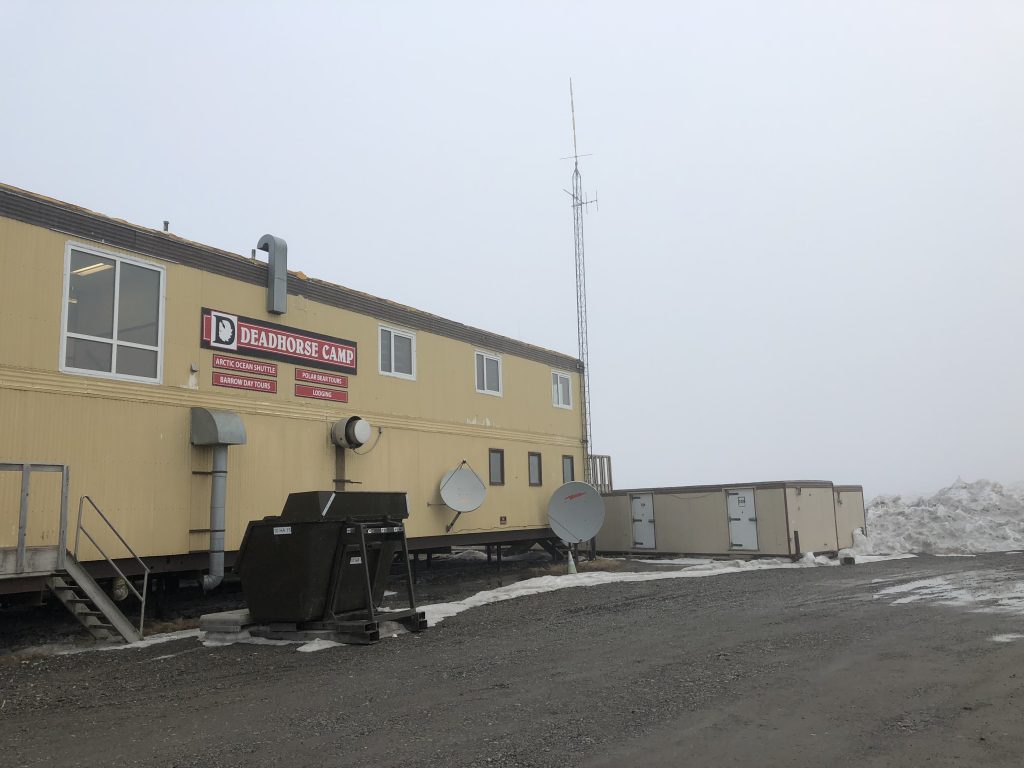 Signs of the cold were everywhere. 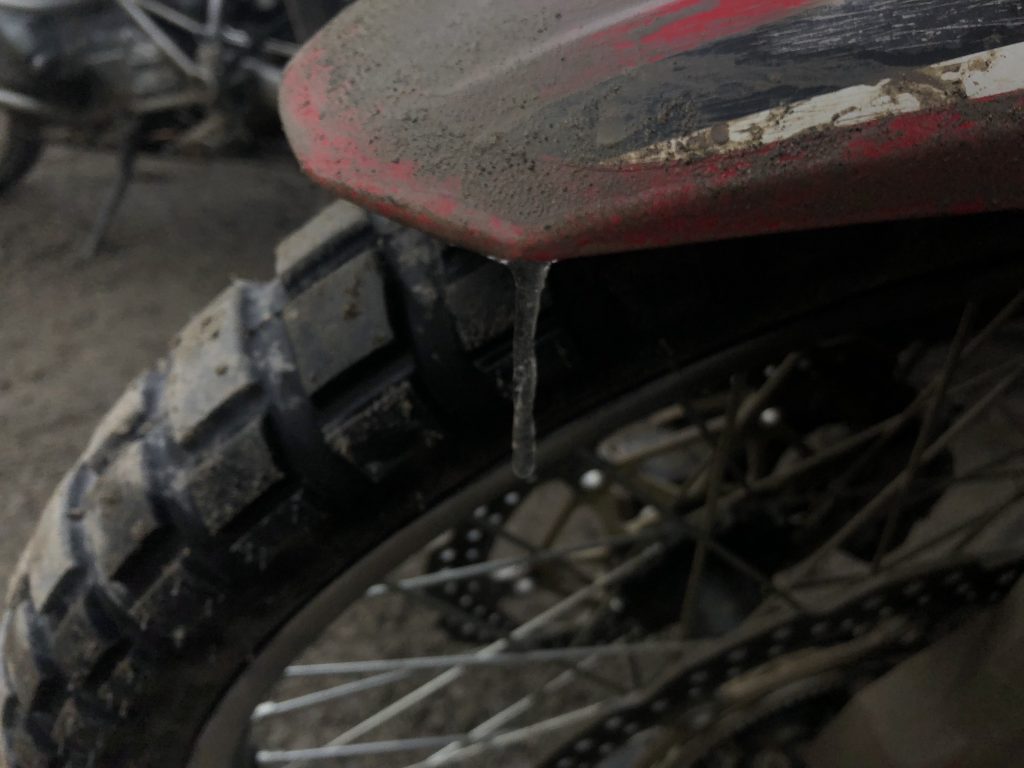 The support vehicle had a flat tyre that had proven difficult to resolve over the last couple of days so we were going to head off on the bikes while the tyre was fixed rather than put the day too far behind.

We were still in the greyness of the ice fog as we left knowing we had quite a while before we were out of the cold. Everyone hoping that there were sunny skies up there somewhere. Everything was going along nicely until about 90 miles from Deadhorse when one of the riders got caught up in some deep gravel on the road, lost control and was promptly high sided into the air landing hard right near the edge of the road. The 800GS he was on looked like it was exploding as it did a couple of full cartwheels before it landed on the edge of the icy tundra.

For the next hour and a half we all got a good dose of how remote this Arctic area really was. The rider was knocked unconscious for a while. His helmet was damaged and there was blood inside it. He came to confused, agitated, in pain and clearly concussed. It was apparent he’d broken an arm, his breathing was laboured….

We were a long way from mobile phone service, Dan the guide was ahead of us and we didn’t know whether the satellite phone was with him or on the support truck. As part of the tour each of us had a paid up membership with Global Rescue but that’s meaningless if you can’t call them.

We were extremely lucky on two fronts. Firstly, Crystal was an ER/Trauma nurse so we were able to try to keep him still, comfortable and support his neck/head at her direction.  Secondly, there was a maintenance camp of some sort nearby and the workers there were able to call through to Deadhorse to get the Ambulance on the way. They provided us with some blankets while we waited for what seemed like forever for the Police and the Ambulance to arrive.

Bill had arrived with the support truck and the broken bike and detached pieces were loaded on to it along with another rider’s bike who wanted to stay with his friend rather than continue the ride. This incident gave us all pause to reflect on how quickly things can go wrong when you are Adventure Riding in very remote areas. For some what had been relatively straightforward riding yesterday became a little more challenging with a different mindset and more “vigilance” today.

The rider was stabilised in Prudhoe Bay then air-lifted to Anchorage where he spent quite some time in hospital recovering from his injuries before he was allowed to return home.

The next stop was at the first “toiletted” roadside rest stop where the conversation was muted and the subject obvious. The views however were fantastic! 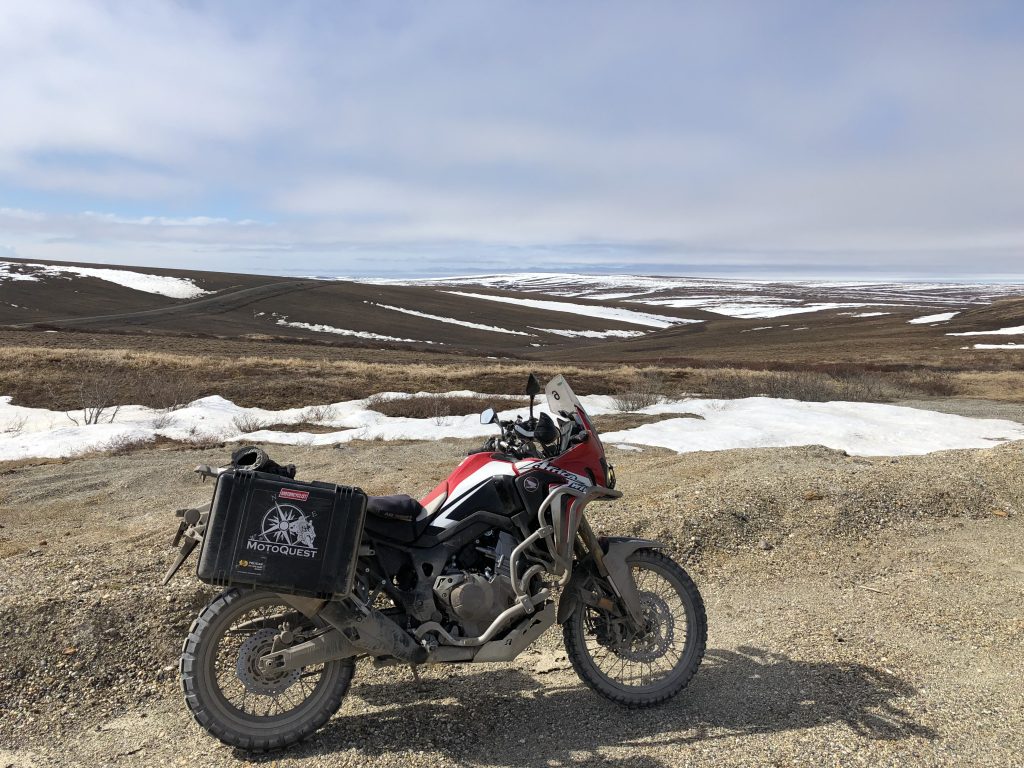 By the next stopthe mood had mostly returned to normal and the enormous scenery and adventure we were sharing kept delivering in spades.  We were out of the grey cold and stopped next to the fast flowing Sagavanirktok River. , We ate our lunch that had been packed for us at Deadhorse Camp. A huge deconstructed meat and salad sandwich, chips, cookies, a banana, a can of coke and some treats. 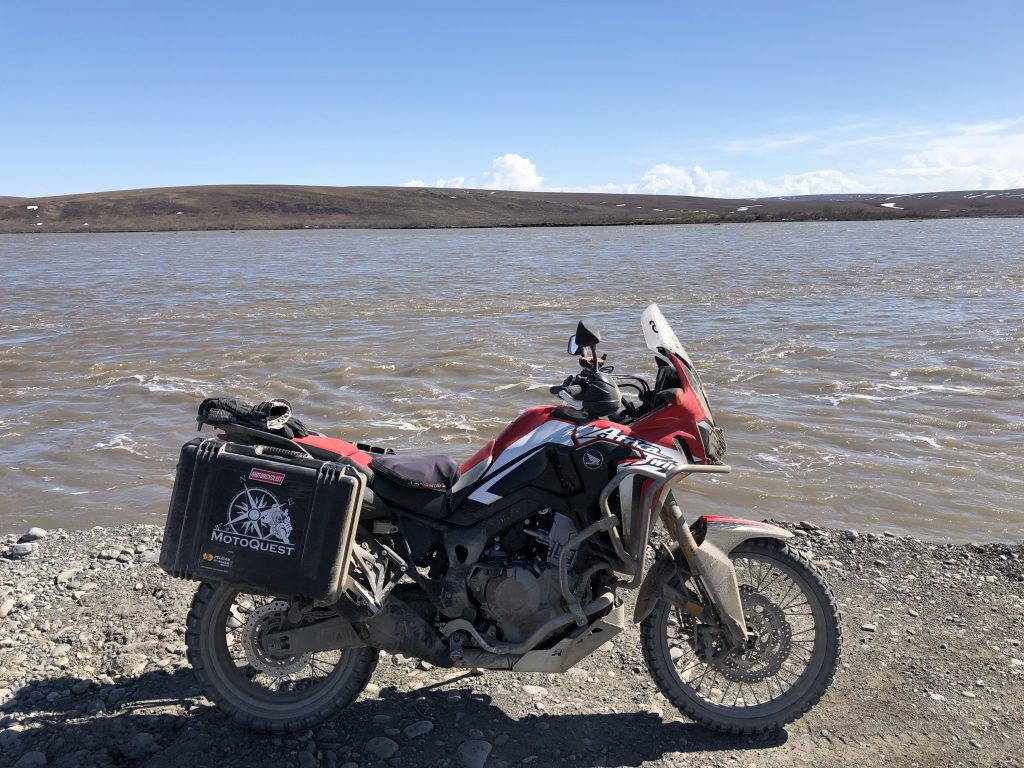 The pic doesn’t give a good impression of the amount of water up there.

The bikes were refuelled from the jerrys in the truck and Rob and I pushed ahead of the group. We’d seen a couple of things we wanted to photograph yesterday on the way up but were too excited to get to Deadhorse to stop.  The first was an amazing lake, Lake Toolik. 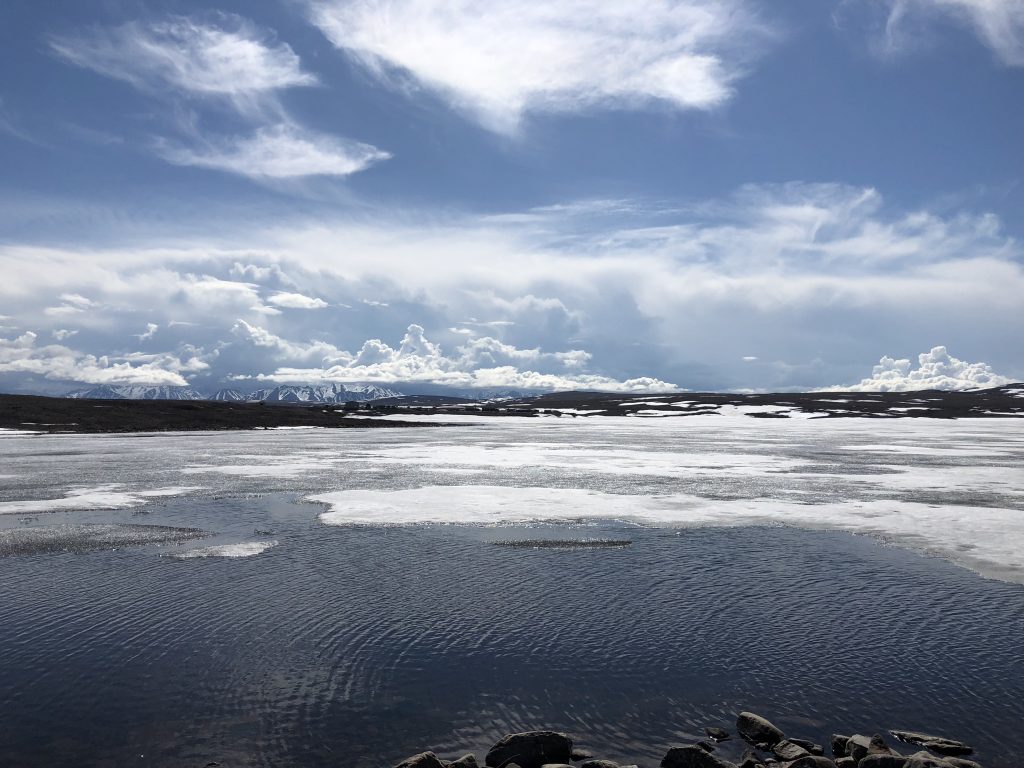 You couldn’t take a bad picture of scenery like this 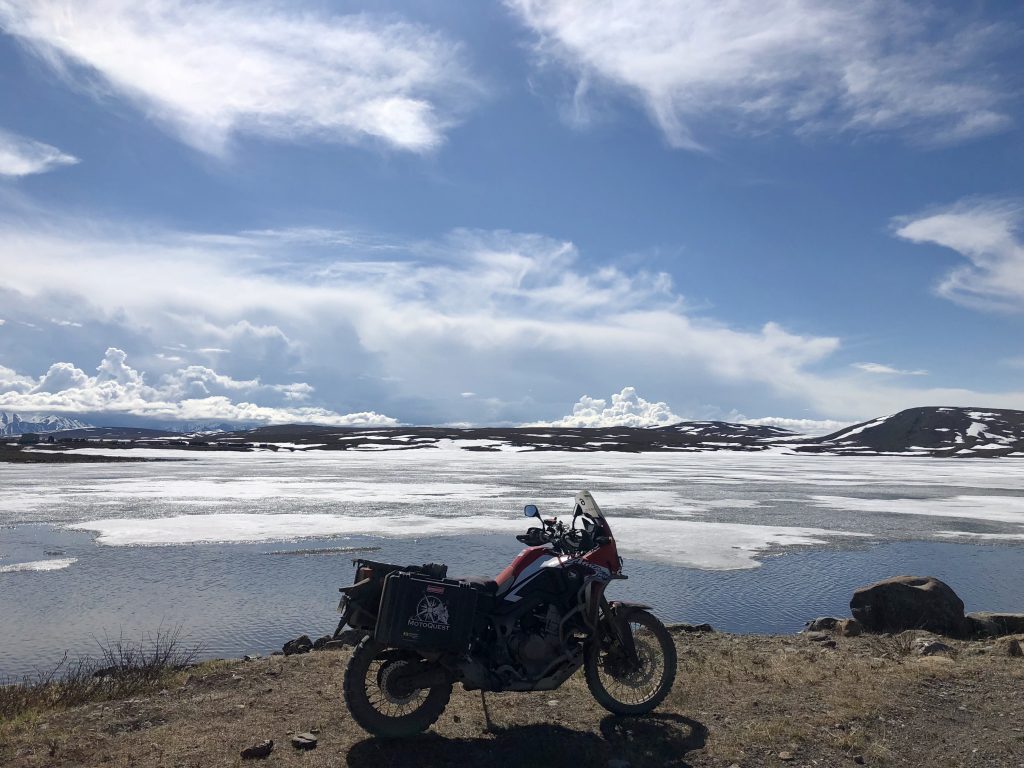 And the next was the northern Atigun Pass Sign.

along with one of the avalanche warning signs on the pass.  I can’t stress how beautiful the ride over and through this pass is.  It’s also pretty easy to see how the road, which in places is just cut into the side of the steep mountains, can be easily cut by dangerous avalanches.  Certainly stopping in some areas would not be a good idea. 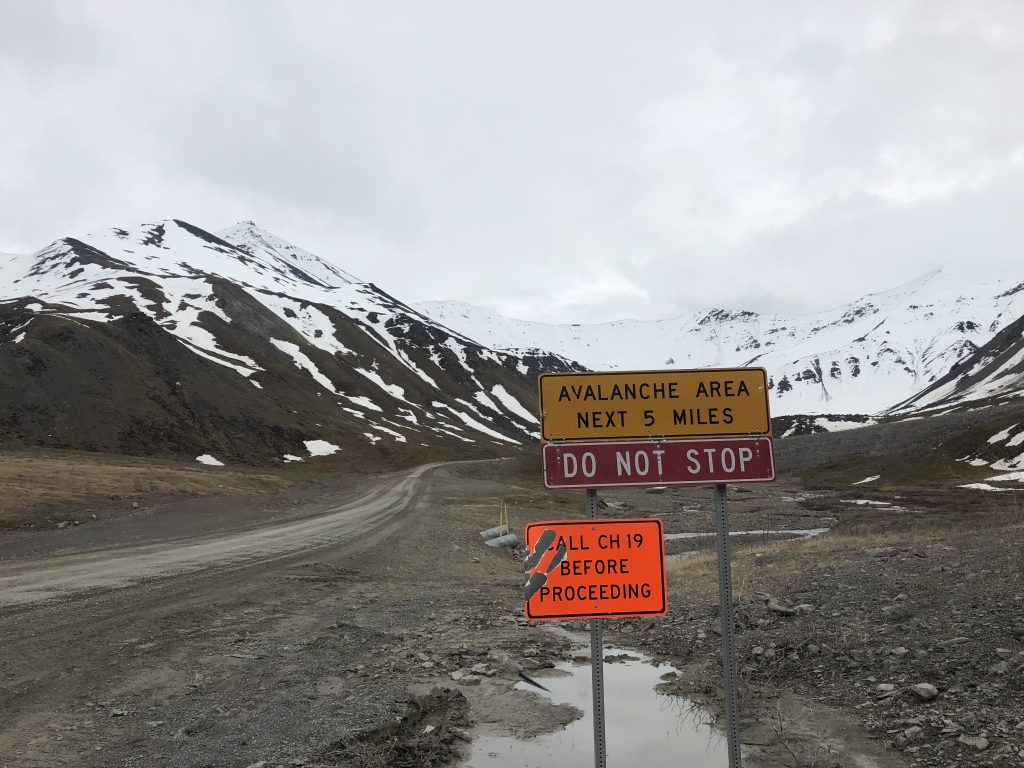 As a result of a bit of rain, grading, watertruck spraying and looking at the views that were behind us yesterday the ride really seemed completely different today. This was the nice gravel between Atigun Pass and Coldfoot we’d really enjoyed yesterday. It wasn’t deep, it wasn’t  boggy but it was bloody slippery. 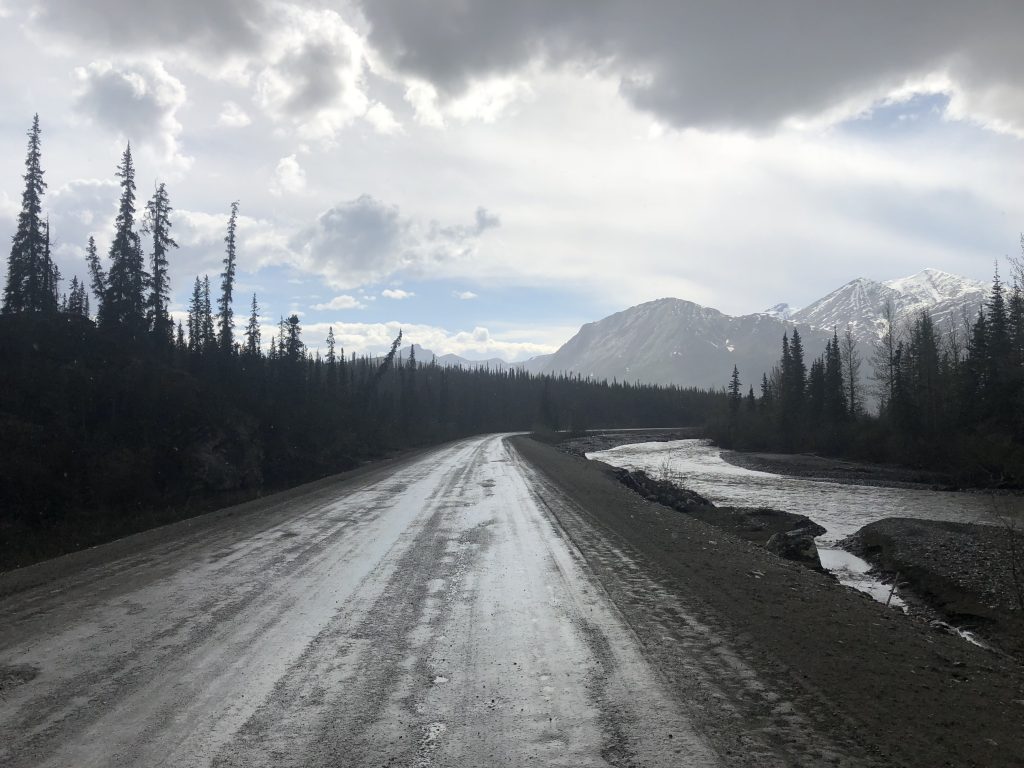 Rob and I, despite the photo stops, still made good time and made it back to Coldfoot Camp before dark. See what I did there? :-).  We’d cleaned up, changed and were enjoying a beer as they rode in in dribs and drabs.

There was a free guest laundry at ColdFoot Camp that some of the group utilised. 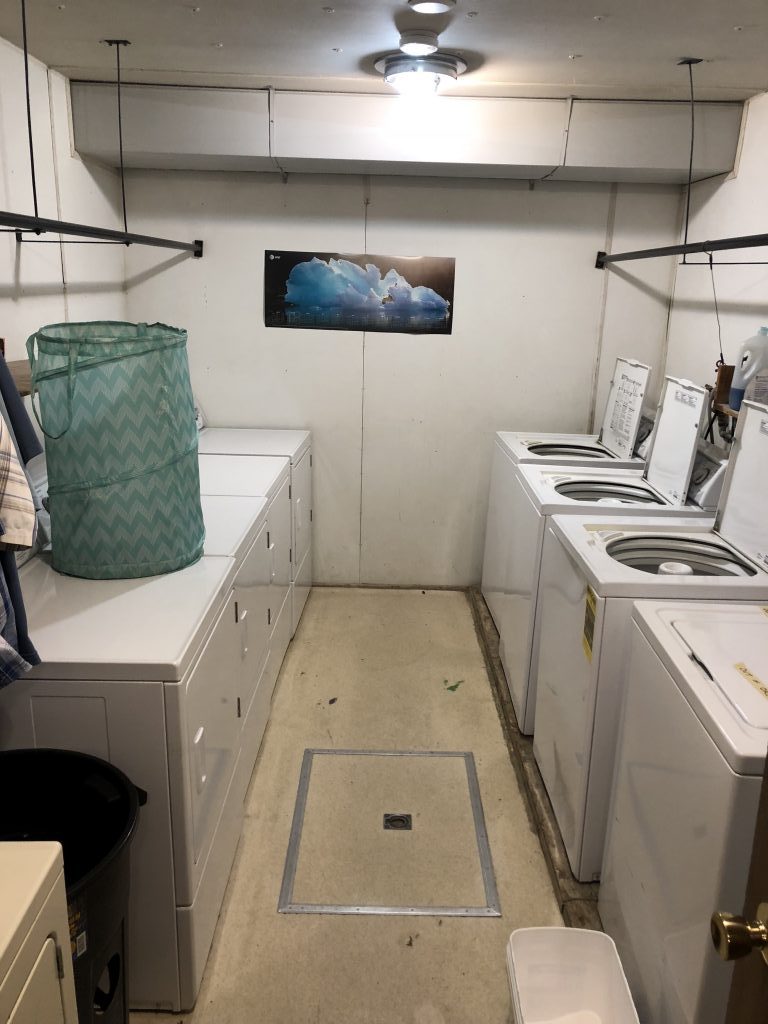 The all you can eat buffet was fired up soon after with a different selection to that of two days ago but just as good.  Over a few beers we debriefed the good and unsettling parts of the day. Tomorrow we would be heading back to relative civilisation. But we still weren’t going to see a sunset!