Well, today started out as a nice easy newbie ride with the Hunter Dual Sport group organised by smiling Dave Wilson.  For most it turned out to be just that. However, I was afforded the opportunity to test out my choices for protection of my Honda Africa Twin. They consist of the  SW Motech Crash Bars, B&B Safari Bash Plate and BarkBusters that I purchased from Craig at Adventure Bike Specialists.  A bit about the ride and the fall first, if you don’t want to read that then jump straight here.

I met some riders at Cooranbong and waited for Dave and the rest of the group, who had started elsewhere, to show up.  Soon after we were on our way up Martinsville Road, leading on to Watagan Forest Road and on to the gravel for a quick regroup at the Olney HQ camping area.  What a beautiful day for a ride. 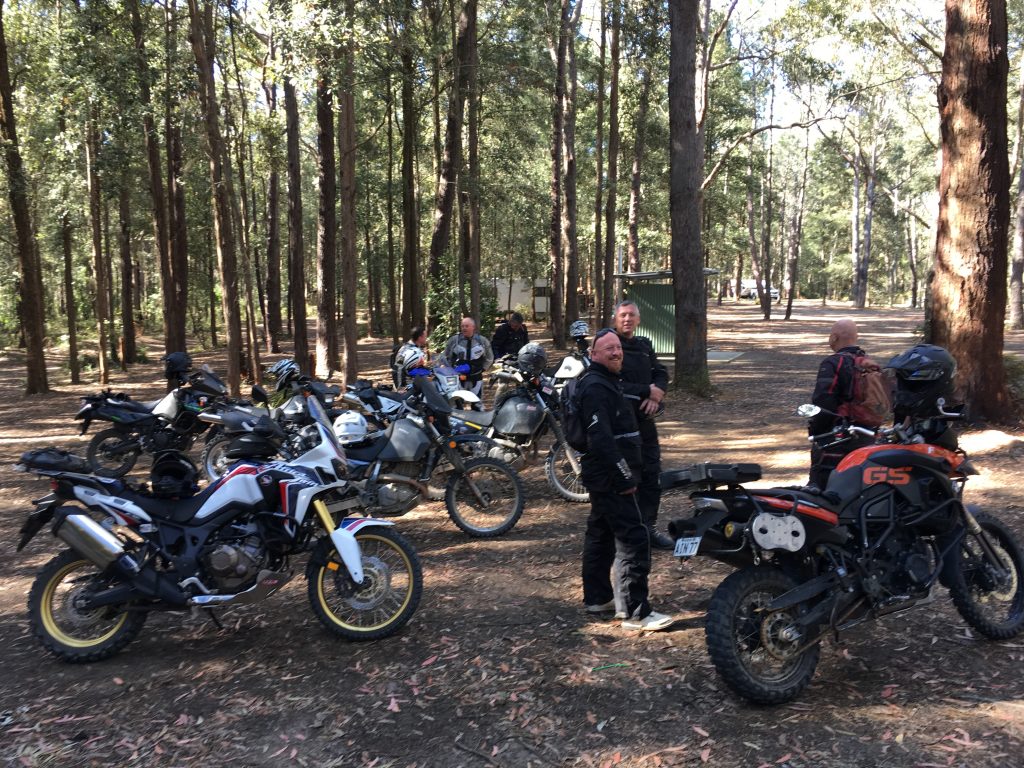 From there it was a left to Walkers Ridge Forest Road and a right onto Murray’s Forest Road.  I’ve not been on this trail before, great fun!  Along there somewhere a rider had a little issue on a DR650 and I took an opportunity to have a break. In the quiet time I  started to notice that other than the 800GS above most of the other bikes on the ride were singles with R’s in their names, you know, DR, WR and the rogue KLX.  I’m not used to having the biggest bike in the group, particularly given the Africa Twin is my smallest off roader. I tell you what, Safari tanks must be doing good business too!  I digress…. 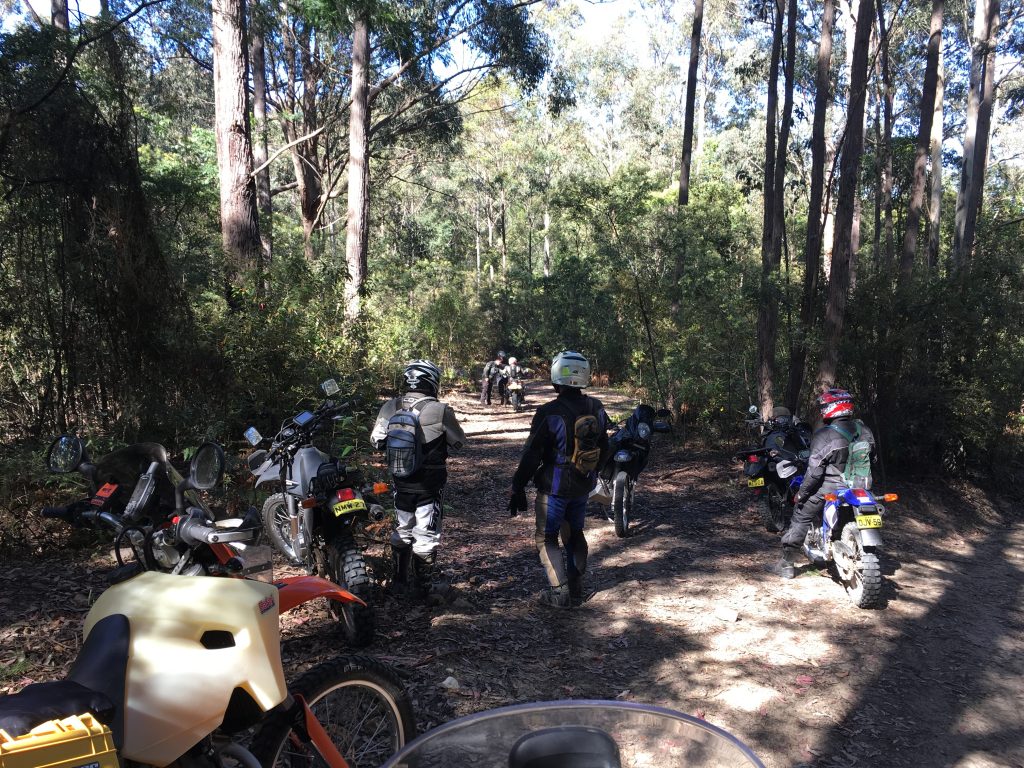 The DR decided to start after some persuasion and we were off again to the Basin Camping Area and Basin Forest Road for a sip of water, snack and regroup.  This last bit was a little more challenging on the Africa Twin for me, pockets of sand on corners, some rocky-ish descents but it was all good fun. 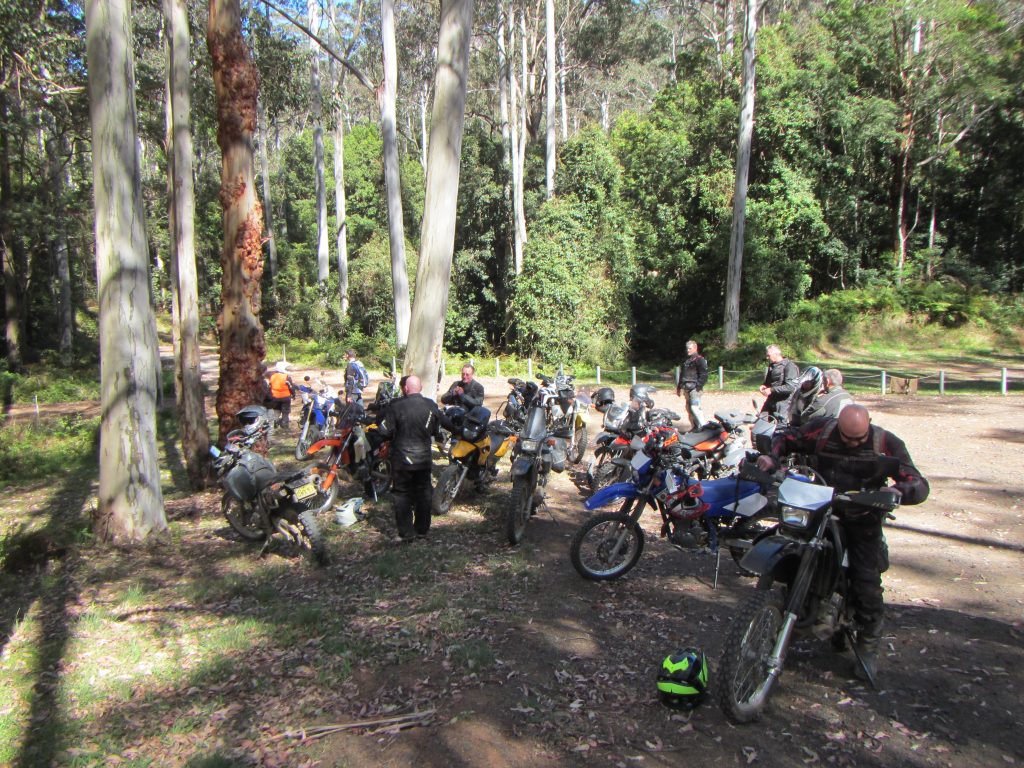 We joined back on to Walkers Ridge Forest Road, took a right at Brush Creek Road and a quick right onto Murray’s Run Road. What a nice piece of road this is, some winding tar sections with gravel here and there as it winds its way through scenic farmland to the Great Northern Road south of Laguna.  I’m definitely going to ride this part again, but…

It was along here while I was happily taking in the view and following the rider in front of me that on an easy right hand, sightly downhill bend I found myself suddenly wondering why I was sliding and rolling along the gravel without my trusty AT under me.  Neither speed (50kph ish I reckon), alcohol, gravel road conditions or critters were a factor. I have no idea what happened but in the absence of contributing factors I can only blame rider error. There’s always a positive side –  this is the first of the three times I’ve fallen off this bike I didn’t end up trapped by it!  I can’t work out if I’m getting better or worse though.

After I stopped sliding along the gravel road the rider behind me, on the rogue KLX  (thanks Lindsay for helping and for not running over me!), who was as puzzled as me about the cause of the fall, was off his bike and rushed over to help.  I did a very quick pain check and got up and did a quick limb function check.  The bike was a few metres away from me on it’s right side.  I walked over to it, reversed into it assuming the position and with Lindsay’s assistance got it back on it’s wheels.  He was clearly concerned about my well-being, particularly my right shoulder and head which I believe took the initial impact.

My helmet had connected with the ground, the peak was damaged but there was no pain, vision fine and I was thinking clearly.  Not wanting to make too much of a fuss I started the bike, noted that the ROX risers had twisted somewhat so the bars, although not pointing where they should, were straight enough to ride. So ride I did, to the next stop at Laguna. There I took stock of myself, some abrasions, blood oozing here and there, pockets of pain under my gear that I decided not to inspect until I got home. Nothing too serious I was guessing.  The KLIM riding gear, Shoei Hornet Helmet, knee guards and in particular the Alpine Star Tech 7’s had all done their job extremely well.  The KLIM Dakar pants had some holes worn through at the knee and over the boots, my old trusty Latitude jacket – not a mark, it’s incredibly tough and I discovered later via a nice bruising pattern that the armour in it really works well.

So, at Laguna I took some time to inspect the bike – so here comes the review

The Barkbusters did their job, despite hitting hard enough to twist the risers and clearly sustaining damage the frames didn’t bend at all and the brake lever was completely protected. No surprises there, Barkbusters are a fantastic product.

I initially thought the SW Motech Crash Bars might be a bit low given their style compared to others on the market that come higher up the sides of the bike.  I also recall they were very hard work and fiddly to fit and was very grateful to be only an assistant in this process.  After the first fitting the bar across the front of the bike rubbed on the plastic on the right side of the fairing.  SW Motech replaced this bar at no cost with an altered one to remedy this.  In the crash they didn’t bend at all and there isn’t a mark on any of the paint, perfect.  I’ve also got a pair of Baja Designs S2’s mounted on the SW Motech light mount brackets that fit onto the crash bars.  The lights were untouched in the fall which is a great thing.  The crash bars have  clearly taken a beating.  Now the bike has been down on both sides without damage to the paintwork and plastic so I couldn’t really be happier with them. 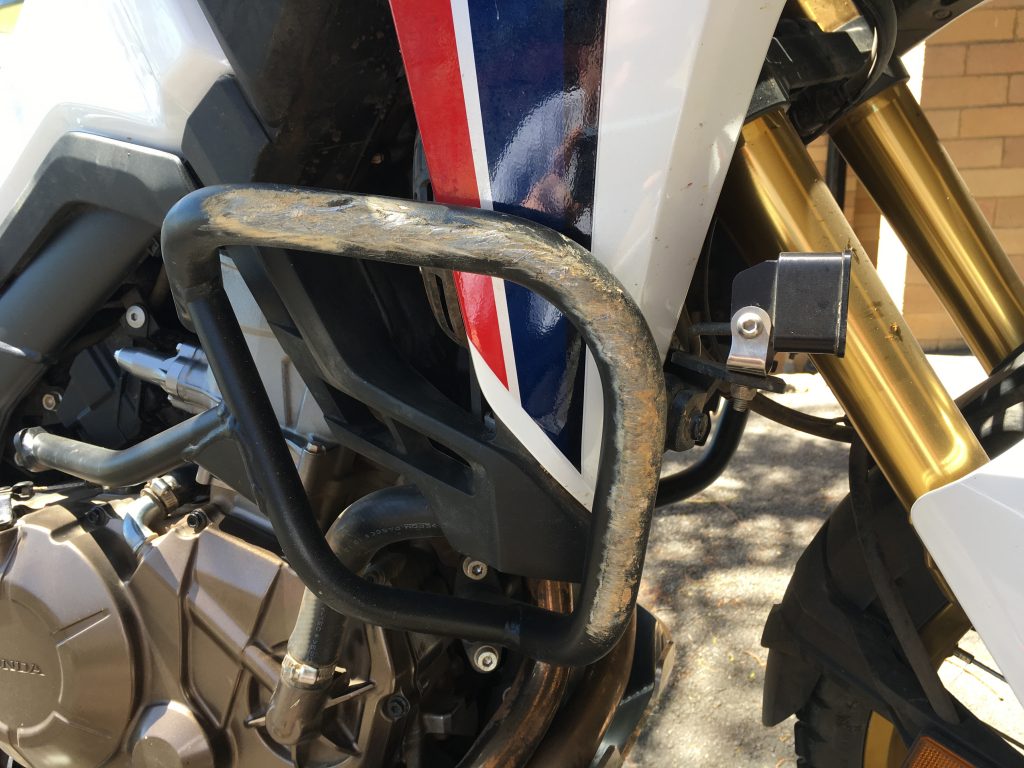 The B&B Bash plate also did it’s job perfectly.  I bought the Safari version because I liked the additional pipe and case protection over the Big Tour version and some other brands.  It was easy to fit and looks great if you like big tough bash plates.  Mine is installed with the foam underneath for noise, I haven’t heard one without that so I can’t comment on whether that’s good or not.  In a crash, well a picture tells a thousand words about how well it worked out for me.  It’s also seen some big hits underneath in recent rides without flinching. 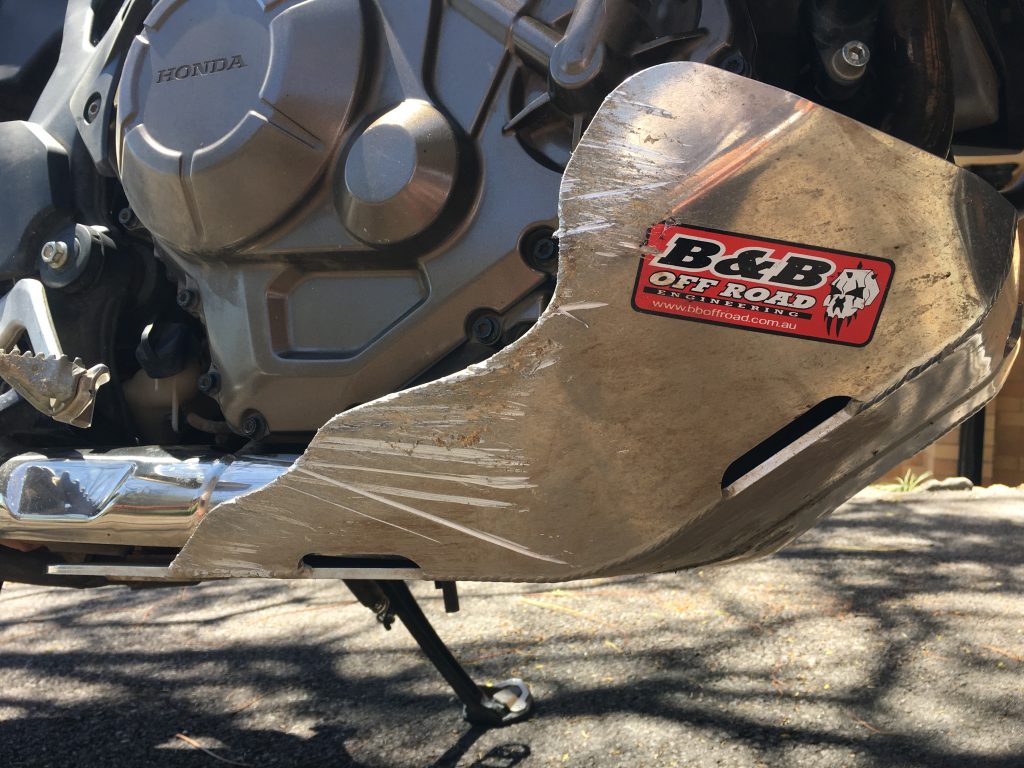 The B&B Bash Plate didn’t move at all and there’s not a mark on the motor.  Awesome!

I didn’t have any additional protection on the rear of the bike and you can see how the Honda parts stood up to it.  One of the riders told me that it would all probably polish out, that’s a good thing.  I’ve got some polish in the garage. 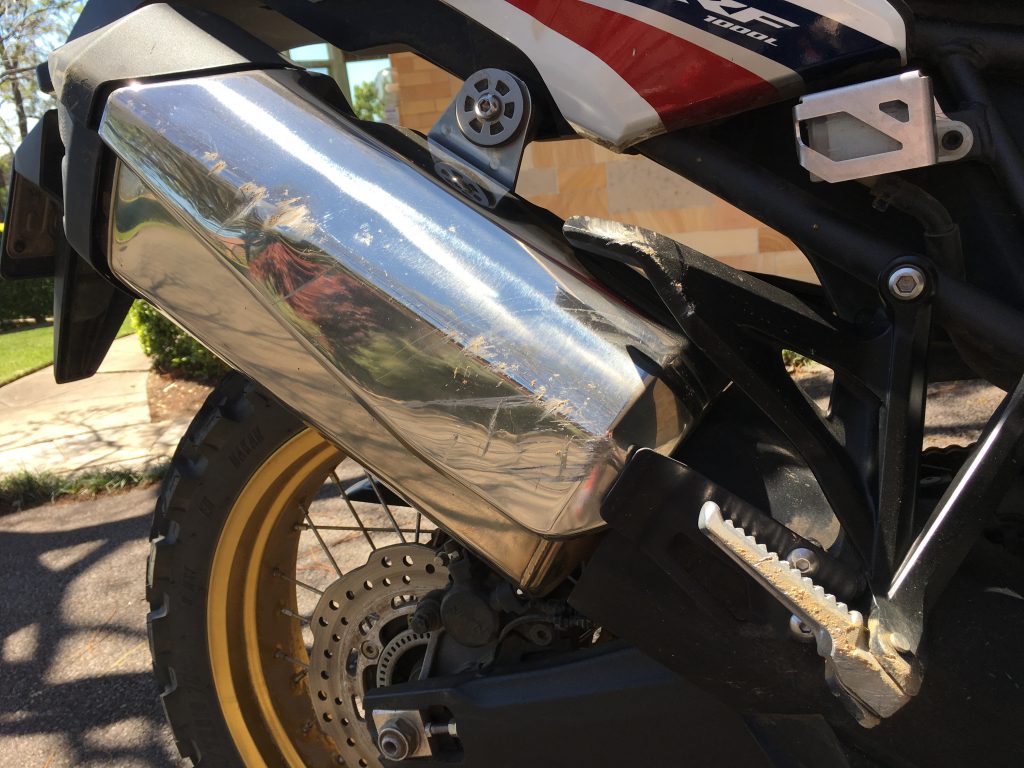 Other minor bits, the right blinker was ground down a touch, the right mirror plastic is showing some wear, the rear brake lever bent out slightly and as I mentioned the angle of the handlebars needs correcting before the next ride.  I decided not to continue with the others on the newbies ride and took myself home on the tar. A nice easy ride back through Wollombi, Quorrabolong and Mulbring.  My left hand was a bit dodgy and I soon discovered that the Africa Twin rides fine without using the clutch which made the trip home much more pleasant.

So 10/10 SW Motech, B&B and Barkbusters for some great protection products for Honda’s CRF1000L Africa Twin!

I’ll get the polish out in the next few weeks to fix it all up and take some time to try to work out WTF I did wrong to initiate this review.  It’s a waste to fall off and not learn a lesson other than to wear good gear and buy good protection for your bike.

Here’s the blinker for good measure. 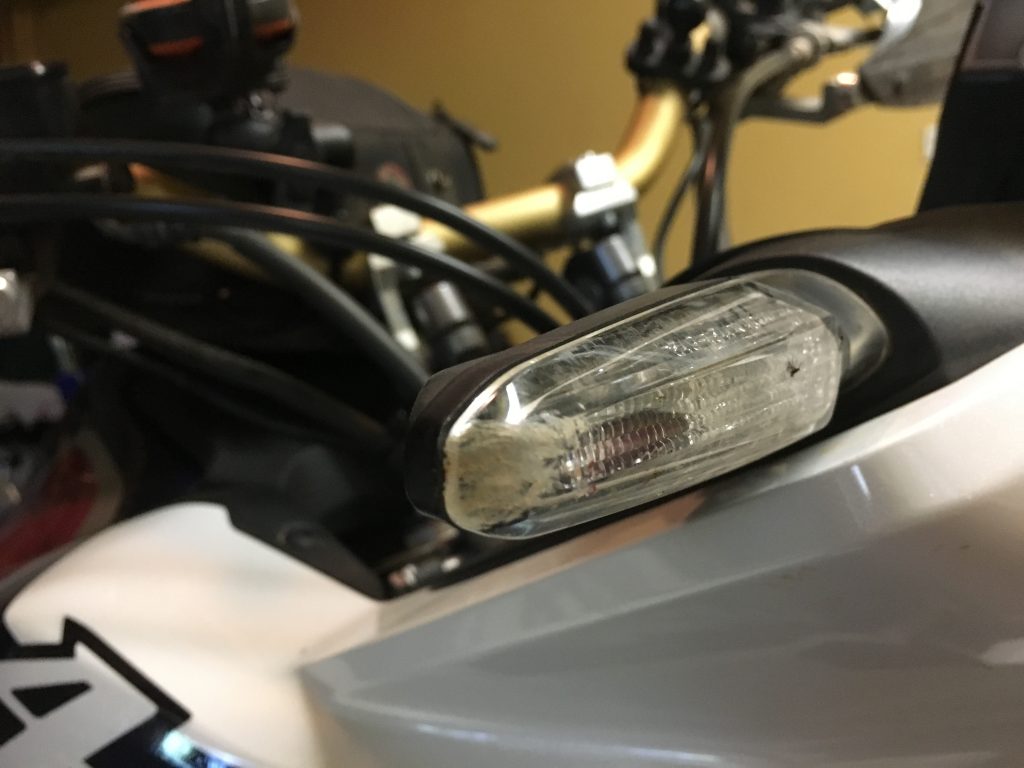