I rode the Honda CRF1000L Africa Twin the other day, the ABS Version in the Tricolour pictured.  The Tricolour is the fastest, even quicker than the red one. Yes, I know it’s not, but it’s a beautiful looking bike.

It’s a difficult to position the Africa Twin in the range of Adventure Bikes. It doesn’t quite sit neatly between the giants (Super Tenere, KTM 1290 Super Adventure and BMW’s flagship F1200GSA) and the not so giants like the Triumph Tiger XC and F800GS. It’s got elements of both groups and things missing too.  Sure, the Tiger XC has about the same power (delivered at higher revs), cruise and lots more gadgets (especially the XCA)  and it’s a bit lighter but it’s way shorter on ground clearance and suspension travel.  So what is it? I’ll take a chance and say that it’s like a KTM Adventure R that only has the off road power mode. It’s got the same 21″ front wheel and ground clearance as the Adventure R (250mm), an 18″ rear (smaller than the 19″ on the R but bigger than the 17″ on other bikes).  To me it sits between the Adventure R and things like the Tenere 660.  What I’m trying to say that to me this bike has more of an off road adventure bias. 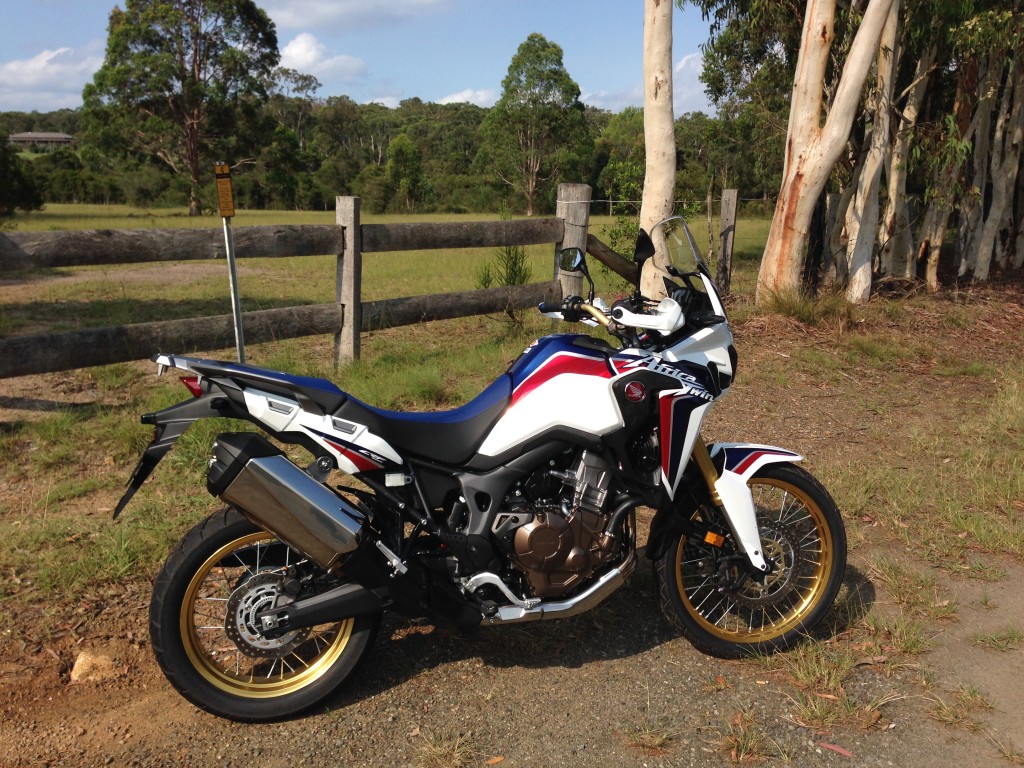 At first glance there are some farkles on the ABS version of the Honda Africa Twin that were not apparent on the non-ABS Silver one I sat on a while back.  Firstly,  the hand guards. Reasonably solid plastic and much better than nothing.  They are what you would expect as an OEM but they aren’t BarkBusters.

There was also an OEM bash plate on this bike wasn’t on the non-ABS version.  It sat  up very high not messing with the ground clearance noticeably but appears more flimsy than you would get after market. It doesn’t seem to provide a lot of protection to the exhaust pipes on the lower right so some thoughts about how hard you need it to be will come into play when deciding if it’s sufficient for your needs. It’s better than nothing or plastic though and at the time of writing after market engine guards and protection are in catalogues but hard to get hold of in Australia from SW Motech, Touratech or B & B.

In terms of engine bars and tip over protection for the plastics Honda have some and SW Motech and Touratech have them too.  Honda are conservative in how they describe their plastics protection bars calling them light mount bars.

Two dealers have now told me that the centre stand is standard on this bike here although it wasn’t on the one I rode.  Apparently they are coming in and will be retrofitted if you get one early without a stand. So don’t let them sell you one as an option!

I sat on the bike with the standard seat (870mm), the foot controls felt a little more forward than the controls on my Super Tenere and KTM1290 Super Adventure but the knee angle was pretty good for someone my height (195cm).  In fact it felt sightly more leg roomy than the Super Tenere and KTM 1290 SA I have and about the same as the Tiger 800 XC I don’t have. So it would be very roomy for average Joe. For the height challenged there is a low seat option (830mm).  The seat was not too firm, not too soft and very comfy.  Because of my height the seat rise to the pillion area on many bikes is where I try to sit which is a bit of an issue for me.  No such problems with the Africa Twin.  Nice!

I rode it through afternoon traffic in Cessnock, it has a nice sound and feels very light and narrow compared to other large and medium adventure bikes I’ve ridden and own.  It’s 998cc parallel twin engine was “torquey” (98 Nm @ 6000 rpm) and  it’s happy to chug along and pick up from low revs any gear.

The suspension travel is long and adjustable.  It felt um.. plush.. to me at nearly 100kgs,  hard braking (and the front discs certainly have some bite) caused it to dive a long way down.  That’s probably to be expected with such long travel suspension on a bike that’s set up for off road.  I have to admit that I’ve probably been spoiled by the KTM’s semi-active suspension that prevents that.  It certainly didn’t put me off though.  It felt softer to me than the suspension on the Triumph Tiger XCA’s  WP suspension.

Then I took on some open road with some twisties through Ellalong and Quorrobolong and the Sandy Creek Road. Turning the throttle delivers very reasonable acceleration from down low with a lovely growl and decent pickup on higher revs.  It’s not a power monster though.  The bike does like to rev and the chain drive delivers the 93.8hp/70kW (@7500 rpm) to the rear wheel beautifully.  It felt like it had more low down grunt than the Tiger XCA but a touch less up top and for me was better all round to ride than the BMW F800GS.  It makes sense given the differences in horsepower and motors.

The gearbox is a delight, snick snick snick.  The throttle was harder to turn than other bikes I have so I did find myself struggling a bit to hold the throttle in position and maintain a speed (I thought I was cruising but I was slowing down). One would get used to or it I guess, might just loosen up a bit with use.  I’d prefer it a little less stiff out of the box though.  The clutch was factory adjusted so it couldn’t be fully activated with fingers behind it so the adjustment would need to be sorted for off road use.  It was however plenty light enough to be operated by one or two fingers as was the front brake.

The standing position was pretty good for me even without bar risers but long term I would definitely need them. I use them on most bikes.  There’s plenty of space on the bars for farkles.  I’m not sure about getting a GPS up behind the screen, I guess SW Motech or Touratech will sort something out there.

However the footpegs were tiny and not really useful for standing or touring unless you bound your feet as a child.  For most riders they’ll go straight away.

The stock screen is low and non adjustable. It protected my chest but my helmet was out in the wind.  I’m good with that but if you like to sit behind a big screen it’s not for you.  There is a sweet spot with the screen at higher speeds, you’ll need to find that yourself.  There is a taller OEM touring screen available however I’m not sure how much help it would have been for me.  I fear it might just add buffeting to the helmet,  but for shorties it might be a good option (if you can reach the ground when you sit on it :-)).

Sandy Creek Road provides some nice familiar 25 and 35kph corners with a dodgy tar surface that I like to test most bikes on.  The bike felt light, nimble and was easy to tip in.  The 21″ front wheel feeling isn’t something I’m totally used to but on good surfaces didn’t cause any dramas and felt very stable, even at speed.  I did manage to lose front and rear traction on a couple of tight bumpy corners that would not have upset the KTM or the Super Tenere.  It may be the lower weight, softer suspension, I can’t say.  It wasn’t truly ugly just took me by surprise a bit, let’s say just puckerworthy.  I’m thinking that stiffening up the suspension a touch would assist that on road but perhaps at the cost of some off road suppleness.

Sadly I didn’t get a chance to ride it off road (yet) I feel it would come into its own there particularly for those of us who aren’t Toby Price.  The OEM tyres on it were 90/10 Road/Off Road so many new owners would probably swap them for knobbies straight away.  The tyres are not tubeless.  I’d prefer tubeless but off road tubed tyres have some advantages I guess, except for easy of dealing with small holes.

Riding back into Cessnock in the 100kph zone I got the opportunity to overtake some cars and take some wide open bends. There’s plenty to get around cars in 6th gear and dropping a couple makes it lots of fun.  The longer I rode it and settled in the more I enjoyed it.  Again it’s no power monster. Cruise control isn’t available which for me is a must if you plan some long haul tar touring on it but a waste if you spend a lot of your time in dirt.

18.8 litres of fuel is also a bit light on for serious loooong distances between fuel stops but Honda reckon the fuel efficiency makes up for that.  Riding a few tanks to empty will convince me of that, or not.

There are luggage options, OEM and after market. The OEM seems more road/touring biased but snaps on very neatly and doesn’t disrupt the aesthetics when it’s removed.  Luggage is a very personal thing though, can you get red white and blue soft luggage?  OEM heated grips are available as an option but are pricey.

I reckon the harder core dirt riders will love the non-ABS version. It’s bare bones and 4kg lighter than the ABS version so they’ll use the extra cash to stick on the Barkbusters, B & B bash plate, Pivot Pegz and crash bars without throwing anything away.  For those who need help changing gears the DCT version with an extra 10kg seems popular among the media but it has no interest for me. Maybe in a few years.

Would I pull the trigger on one the Honda CRF1000L Africa Twin ABS? Yep, I sure would if I was looking for a medium sized Adventure Bike to ride off road regularly.  It’s missing some of the fancy things like cruise, heated seats, heated grips as standard etc but it comes in significantly cheaper than Adventure Bikes big and small that have all that.  For getting dirty though it’s got lots of great qualities out of the box and lots of potential to get you places some other adventure bikes might not.