First Sunday of the month means the opportunity to ride with the CSBA and after bringing home the CRF1000 ABS Africa Twin last Thursday afternoon it was a perfect opportunity to get to know the bike.  Thinking back my first outing on my KTM1290 Super Adventure back in September last year was with the CSBA… serendipity? I think so!

Today’s meeting spot was McDonalds at Cessnock ready to leave at 8am.  With daylight savings finishing last night I was up early and decided to just head off, fuel up and have a B&E McMuffin and a coffee up there pre ride. So up the Hunter Expressway turning off at Main Road then the slow haul through Kurri to Cessnock where I topped the bike up for about $16.00 from one bar remaining.  There were a few bikes already at Macas when I arrived including Wayne on his black, red and white Africa Twin (here’s a pic I prepared later). 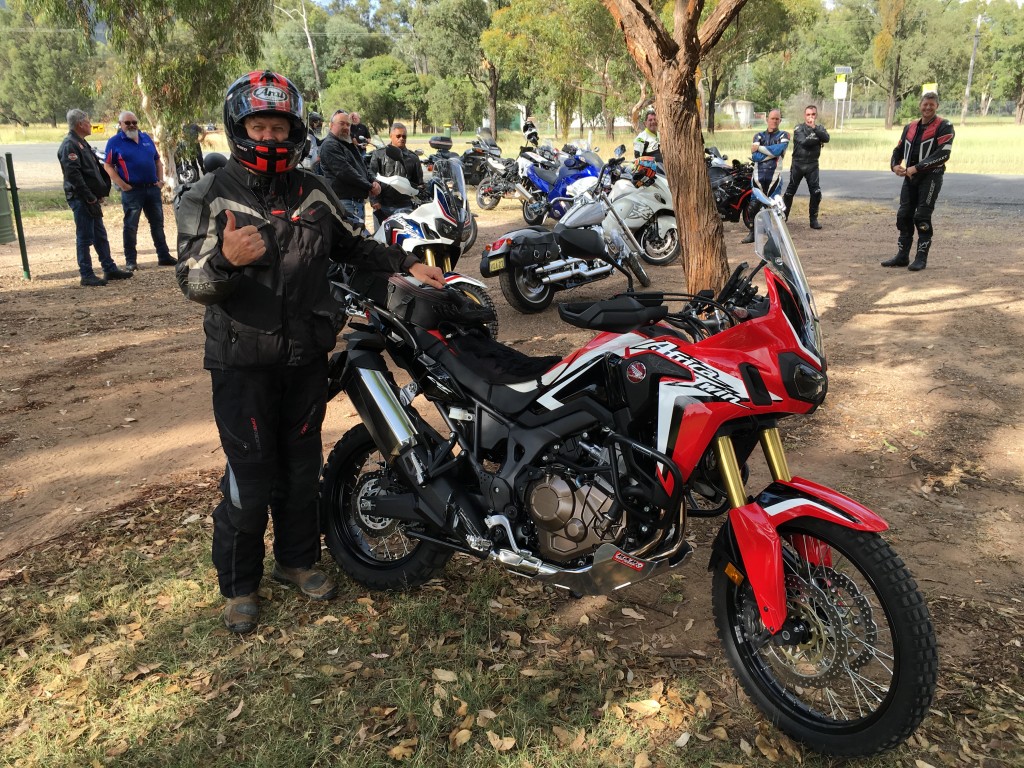 Wayne has SW-Motech crash bars, a B&B bash plate and a B & B rear rack on his bike.  Just the way I’d like mine to end up so it’s great to see the bits working together!  He’s a wealth of knowledge for an Adventure noob like me and I appreciated his advice. I reckon the red and black bike would look great with gold wheels though!

We left Macas and headed out to Broke through the Vineyards and what a beautiful morning it was.  There were about 20 bikes heading to Grey Gums cafe on the Putty Road to meet up with some CSBA members from Sydney.  Some self seeding was done and some finer adjustments along the way.  At Milbrodale we stopped briefly to discuss the Putty manners and a “The Pace” challenge was put out there for people who wanted a slower but more technical ride through the bends.  Essentially ride at a speed that would not bring you under notice AND don’t touch your brakes.  The focus was on throttle/gear control and smooth riding. 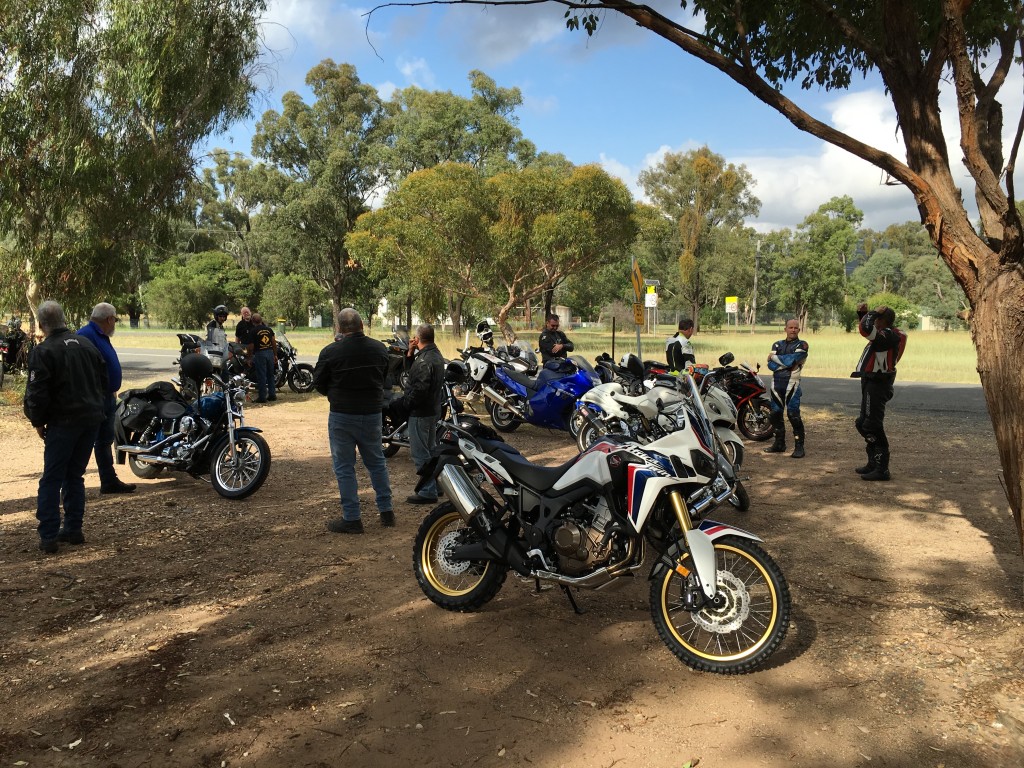 It was fun although I have to admit to needing the brakes some way along going into the first 35kph downhill right hander.  Another gear down was required and after that lesson I didn’t go near it again.  I occasionally set the challenge to not go over the speed limit or under it on roads like this.  This was sort of better because there was less reliance on checking the speedo even though I probably carried less speed through the bends than I might with access to the brakes.

In any case it turned out to be a fantastic way to get a feel for the Africa Twin and tipping it in on knobbies (TKC-80’s) and getting a sense of how the 21″ front wheel feels.  Different and fun but it’s going to take some getting used to.

Grey Gums was packed to the rafters and here’s the secondary motorcycle slab. 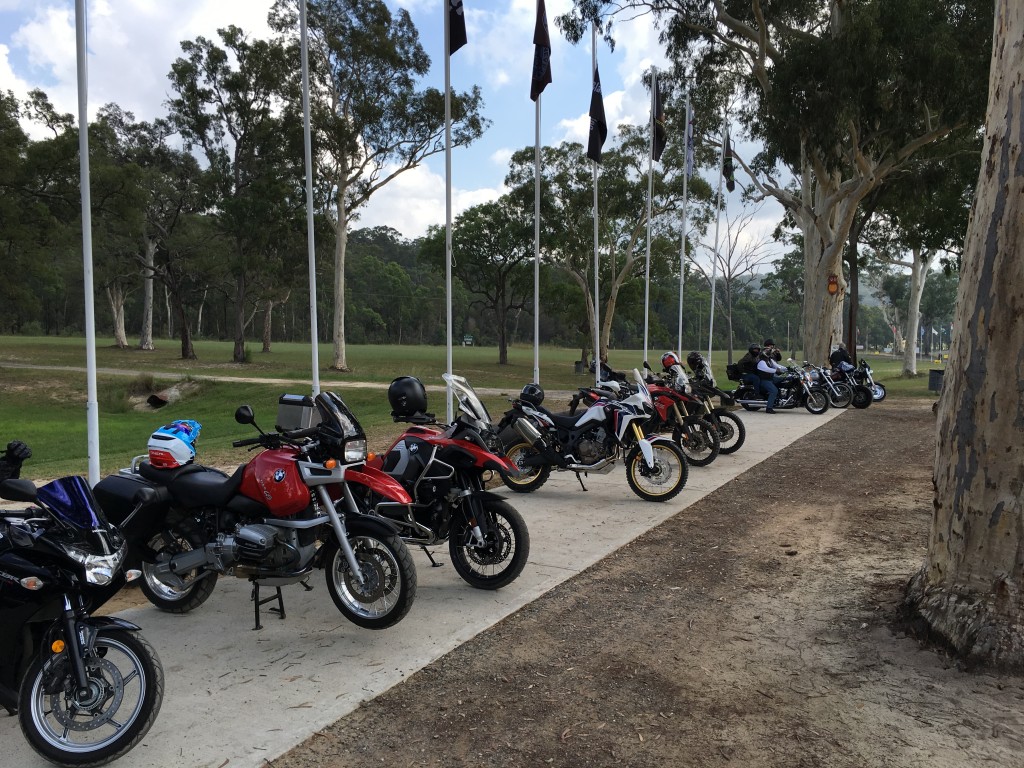 The crowd included three colourful cars with their drivers in blue enjoying the fare.  Everyone watched them leave, interested in their direction of travel.

We said g’day to the Sydney guys some I knew, some I know now and chatted bikes, rides, and general stuff while we waited for food and coffee to come out.  Then we lined out bikes up on the newly tarred driveway into Grey Gums for a photo op and some words were shared. 32 Bikes on the ride today, awesome!

Given the direction of travel of said men in blue “The Pace” was on again on the way back to Milbrodale.  Brake free this run except for covering the rear just in case when a rider coming in the other direction took a dodgy line and was looking very unsteady.  I felt I might need to take evasive action if he became less steady.

At Milbrodale we gathered briefly again and I said my goodbyes.

From there I rode back to Broke, through the vineyards and took Lovedale Road back to the Hunter Expressway then home.

I’ve still got to get the Africa Twin dirty but today the bike really impressed me every bit as much as my test ride a while back.  My bike seems slightly firmer in the front suspension than the demo I rode which I like.  It’s really comfy and the addition of bar risers has made it even better for me.

The motor is a truly a gem.  No chugging in pretty much any gear from 50kph and it’s happy at 50 in 5th.  It’s great in traffic and hums along nicely at 110kph + GST on the freeway.  I can’t speak to overall acceleration right now, I’m running it in, but it’s clear it’s not a slouch and the happy sound it makes when you open it up makes you want to keep doing just that.

The 21″ front wheel feels less planted at speed than my other Adventure bikes with 19″ fronts acknowledging that those bikes are also quite a bit heavier.  Again, it’s not a problem it’s just physics and something I’m sure I will get used to.  The seat is a cracker,  very comfy.  I didn’t think to check the fuel economy, I’ll do that when it’s a bit more run in.

Todays bimble was a reasonably short one at 300k’s or so but a great road, great company and the Africa Twin is proving to be a great bike.