Today’s ride started at 5am start this morning at the Coles Express Wallsend after securing a start docket with a $1.00 bottle of water.  TigerBill was waiting when I arrived and Peter was having a rest up the road after riding most of the night down south. Bill thought it was a bit odd I was wearing sunglasses at night but I didn’t feel like changing them and thought as long as I could see his tail light I’d be fine until the sun came up.

I was fine as we rode the Golden Hwy after picking Pete up in a rest area off the Hunter Expressway.  We passed through Jerrys Plains, then Denman and rode to Merriwa where Bill and I got fuel. This was the only top up we’d need before arriving in Armidale so we thought we’d get it done early. 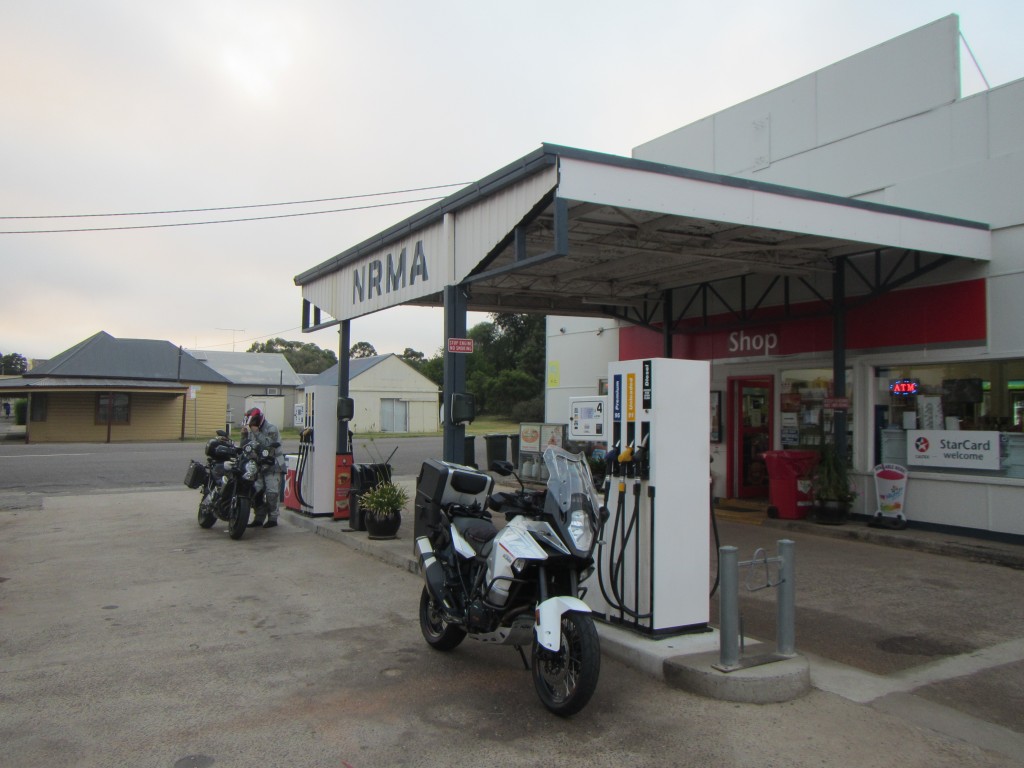 Just down the road we stopped briefly for the opposite of refuelling.  So I grabbed some snaps of our bikes in the morning light 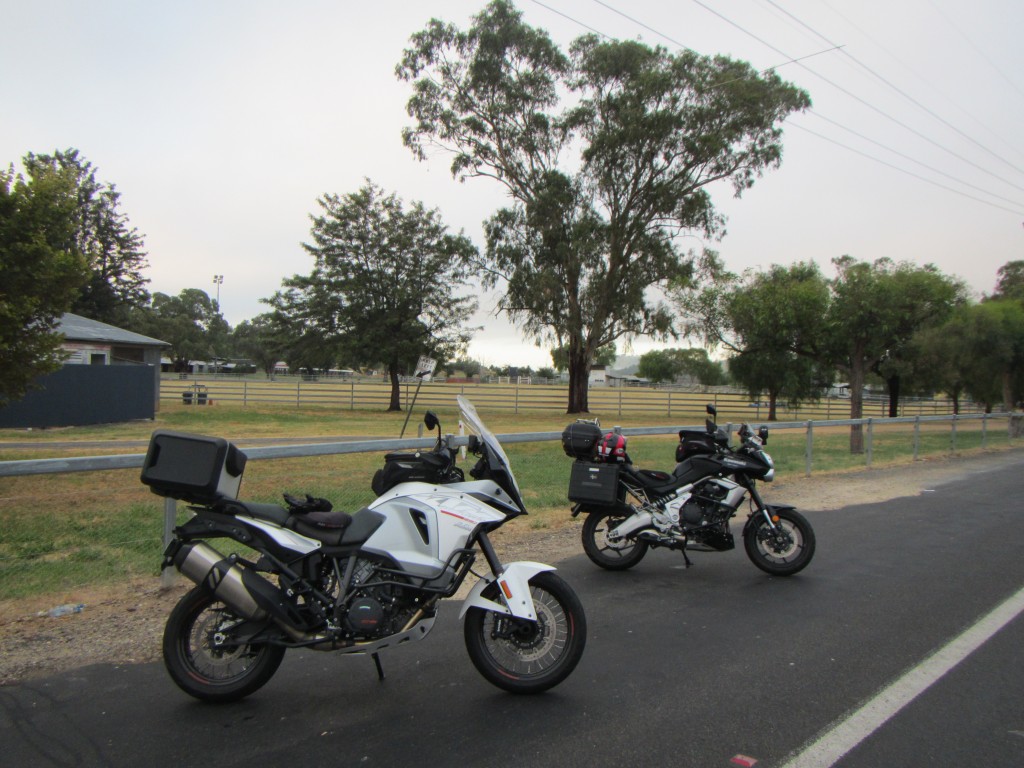 And I asked Pete to smile and he said he was 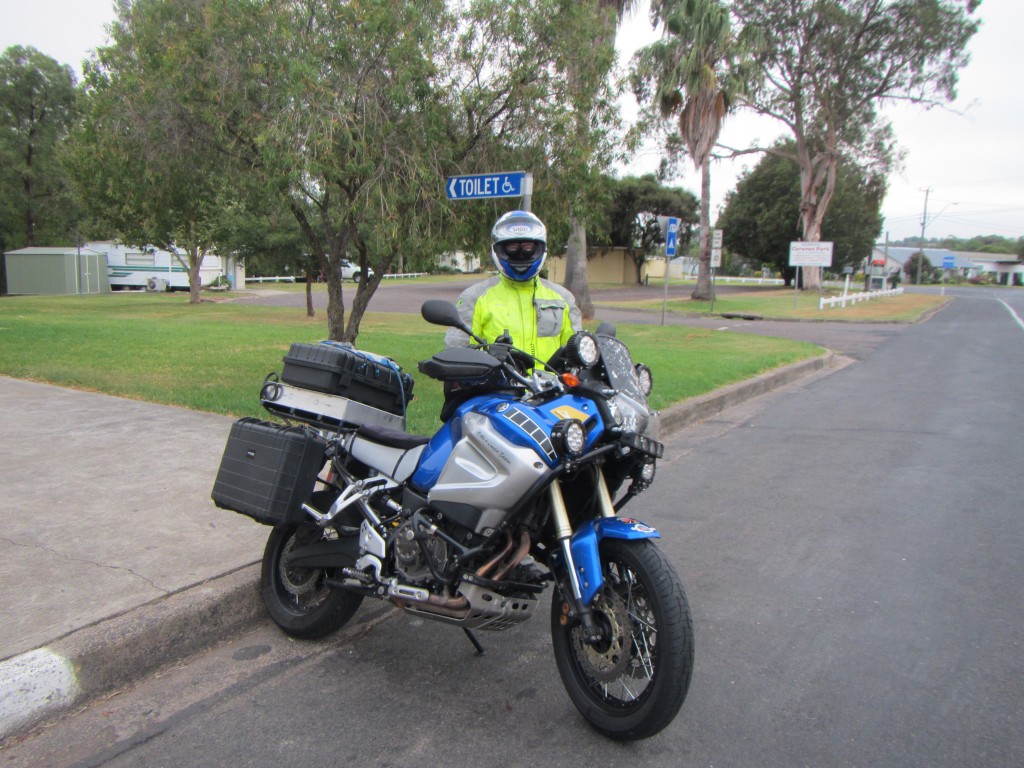 We rode towards Dunedoo and took a right at Vinegaroy Road to Coolah.  The fog was very thick through there and quite out of the blue meat appeared in the pea soup 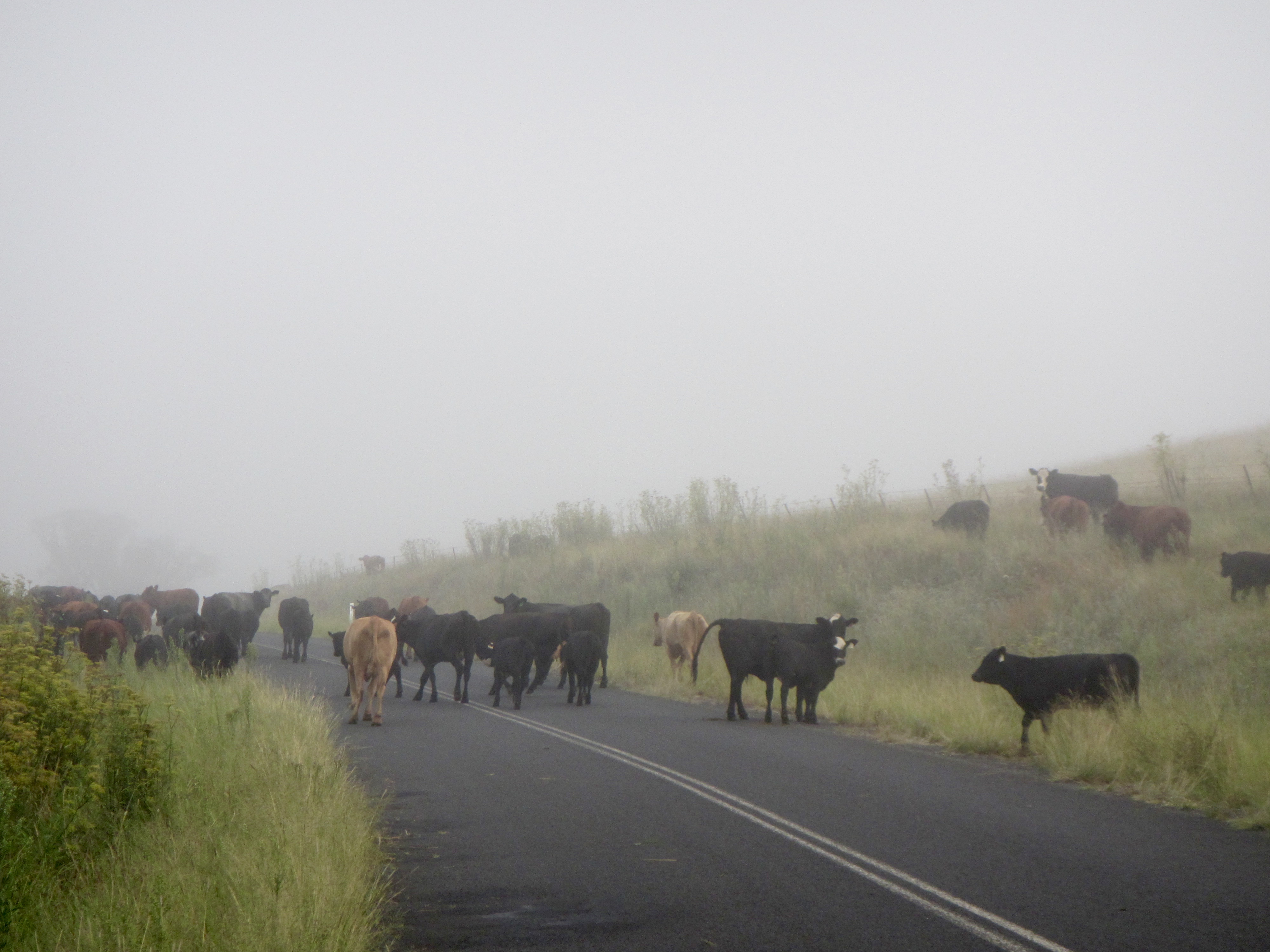 The first I saw of them was after rounding a bend and I was already smack bang (figuratively not literally) in the middle of the herd.  Nasty! I stopped for a quick pic and Bill rode past.  His enhanced horn started a bit of a stampede but got us through without incident.

Shortly after though, a kamikaze kangaroo decided to try to take on Bill’s bike by jumping into the side of it.  Bill saw it coming and twisted on the gas. The back of his bike was unsteady for a moment and he continued on.  The ‘roo did a spin and landed on its side, got to it’s feet (do they have feet?) and jumped straight across my path into the grass on the side of the road.  It hopped along parallel to Peter and I and we passed carefully in case it decided Bill’s bike wasn’t enough and came back in our direction.  Maybe it though better than to take on the crashbars of my KTM and OX’s Super Tenere.

The impact sheared a couple of bolts holding Bill’s pannier brackets on.  At Coolah Pete and I handed over some cable ties and the bracket was secured.  Bill didn’t want to use any of my duct tape, even when I offered!  Every repair should involve duct tape Bill! You can hardly see the cable ties though, I reckon he can just leave that the way it is! 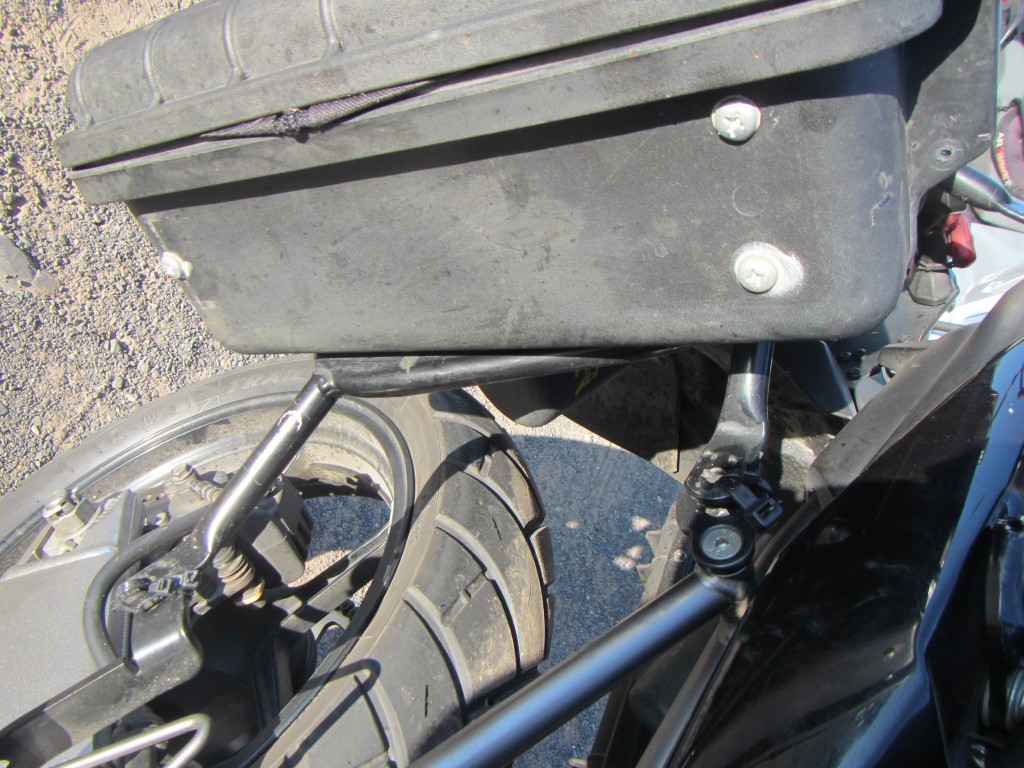 Premer, Werris Creek and a new way around Tamworth saw us heading up the New England Highway through Uralla to the St Kilda Hotel, Armidale  after grabbing some fuel at the airport servo on the way into town.  There was a fair crowd lined up to check in so we joined the queue and then did the rounds catching up with old friends and new.

My cuz, Clay, was there on his second FarRide so we took some time to catch up. Here he is with his new to him Honda ST1300 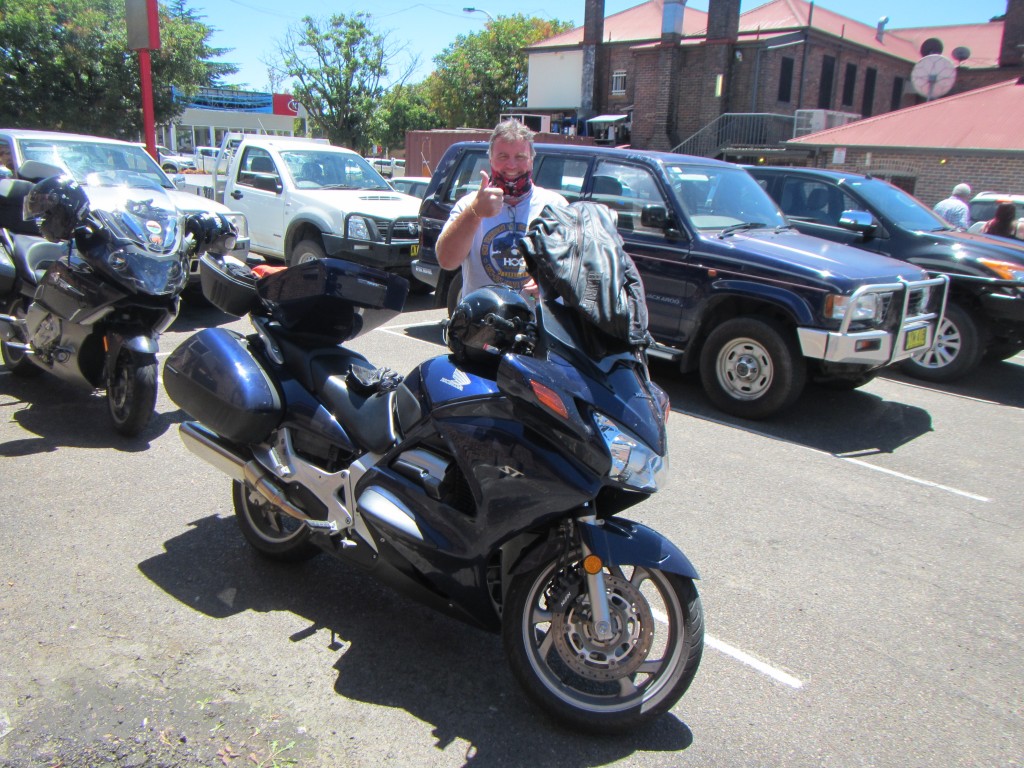 An hour and a half later the place was deserted.  Peter had gone and Bill was waiting to ride back the Newy with me.  He’d already done his 1000k’s in 24 hours because he’d been out to Bylong yesterday afternoon but I needed to ride home down the Oxley Hwy and out to the donut at Port Macquarie to make today’s 1000k in 24 hour minimum ride long enough to be a finisher for the FarRide.  So I said goodbye to Clay and we were off.

We stopped at the Walcha Royal Cafe for a coffee and a bite to eat before taking on the Oxley.  I had a bit of a break at Gingers Creek 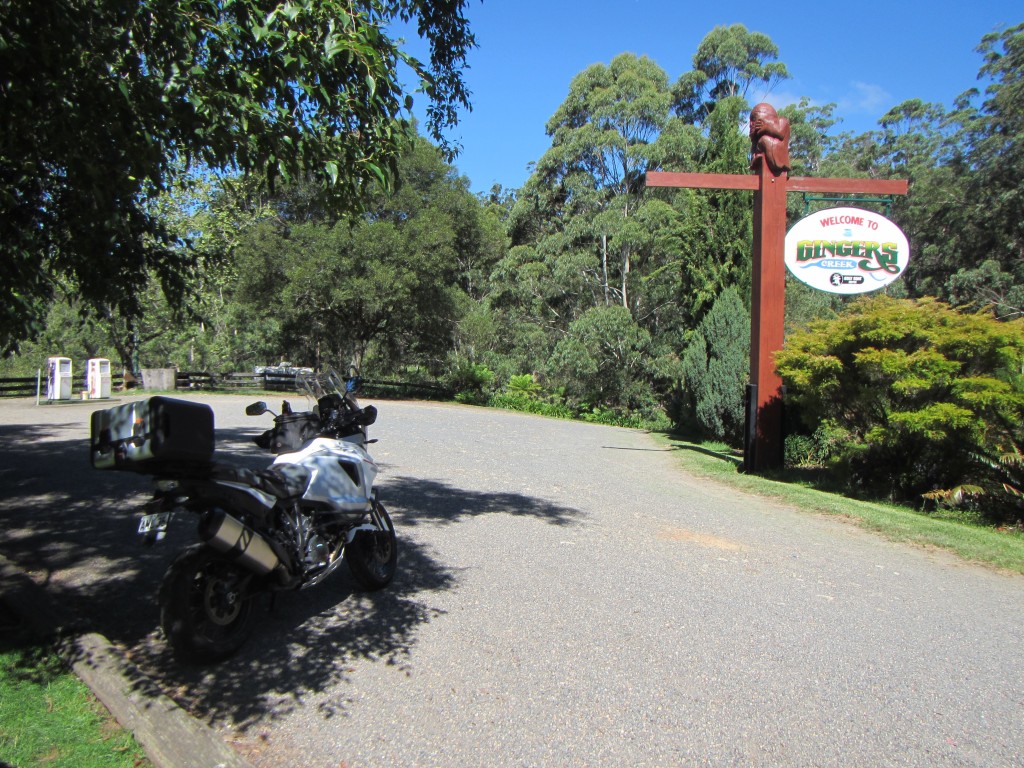 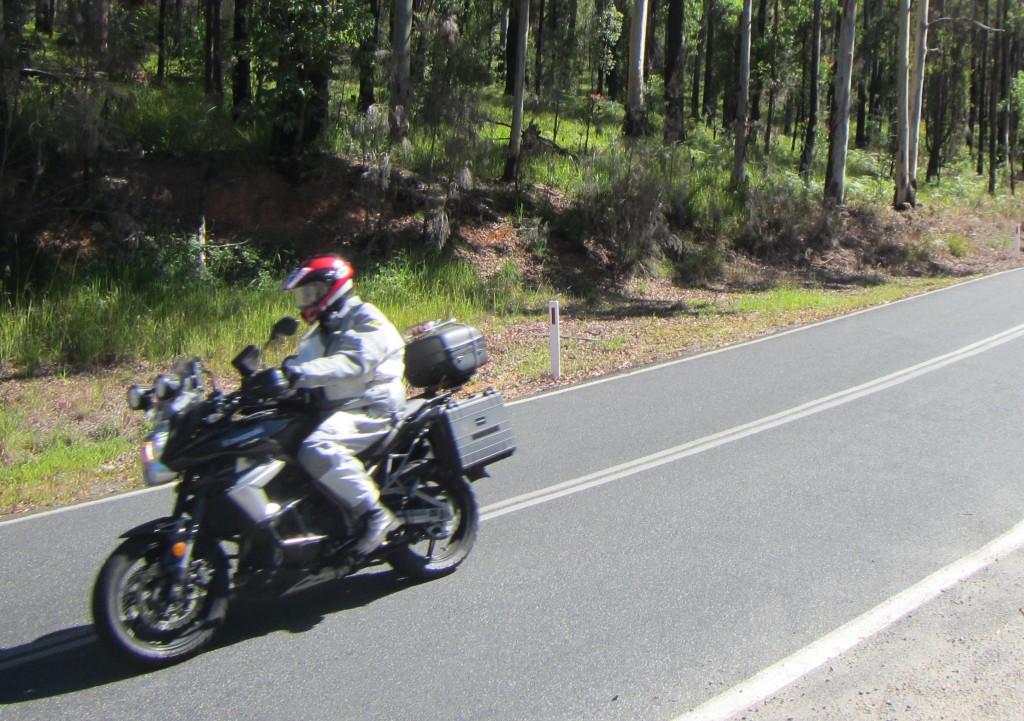 Later I tried to grab another pic 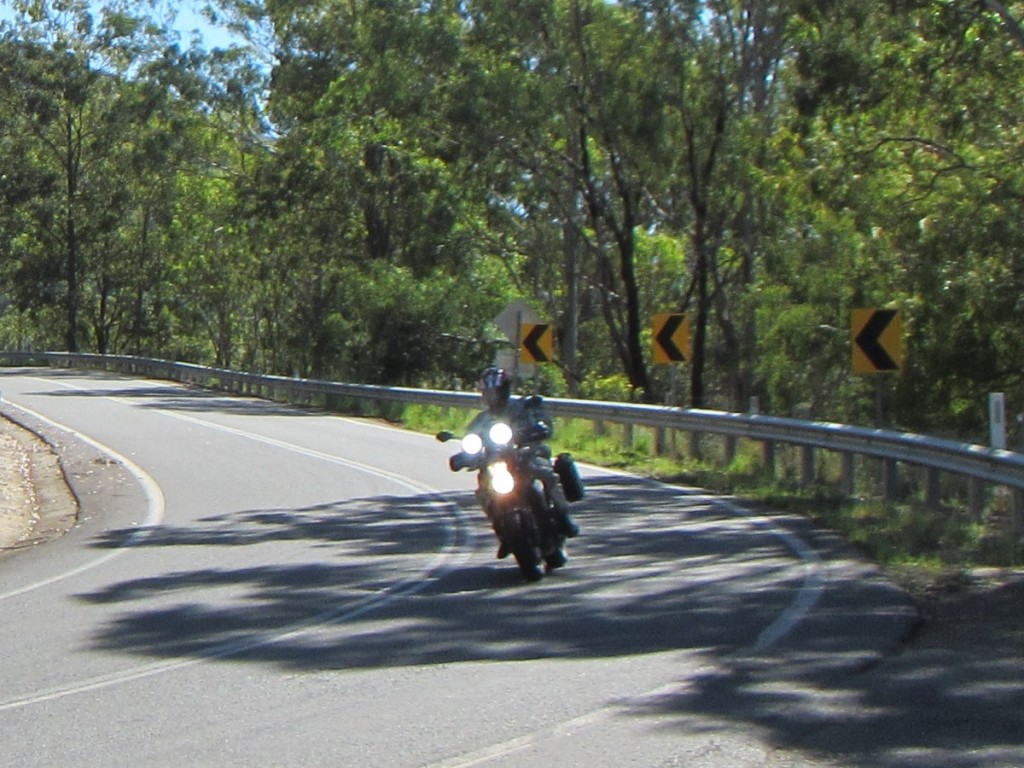 It was eerily quiet on the Oxley for a Saturday afternoon, perhaps the heat kept people inside.  For me it provided empty road and great grip.  A couple of tine cans coming up the hill cutting corners made me cross and a guy on a BMW1200GS came around a blind left hand bend (for him) on the outside of a car he was overtaking. He saw me, panicked and took his feet of the pegs as he tried to get back behind the car and on his side of the double yellow lines.  I hope that muppet never goes off-road with that recovery strategy.

The Oxley done, Bill refuelled at the BP on the donut and we adjourned to the Golden Arches for a McCalorie and a coffee.  Thee was no rush, it was still warm and the aircon was nice for a while before we decided to set  out for the last 230k’s or so non-stop to home.  A non-eventful bimble down the highway.

I was home about 8pm with 1020kms done for the day (Etrex).  A short one but great fun and a nice social occasion as all FarRides are.