A chance meeting with a person I’ve ridden with before led to a last minute invitation for a ride this morning.  I was given the start time and location and accepted without having any clue who else was going, where we were going or for how long.  It was a ride, details are not important!

We met at Greenhills for a quick caffeine at the Golden Arches and struck out towards Farley, Lovedale and Cessnock. A right turn towards Wollombi and the route became obvious. There were six bikes, an eclectic mix including a brand new Indian Scout, a Wee Strom, an R6, a VFR1200, a BMW K1200S and I was on the Super Adventure.

A left turn at Wollombi saw us soon building momentum and self seeding for the bends that we were heading toward.  I’m pretty  conservative and when riding with a new bunch of  people I’m happy to start at the back and pick people off until I find my comfort zone in the group.  Today it turned out to be behind the full racing leather clad R6 rider who really knew how to make that little bike sing.

I really enjoyed zipping up the hill listening to the sound of zipping through gears and full throttle exits from corners while I rode in third and dropped to second occasionally for the 25kph bends.  We had free air in front of us and behind.  When the road opened up at the top of the hills I wasn’t surprised to see the Wee Strom catch up, it’s rider looked very comfortable on that steed.

Jerry’s cafe, a mecca for motorcyclists was buzzing as usual and we pulled in for more caffeine. 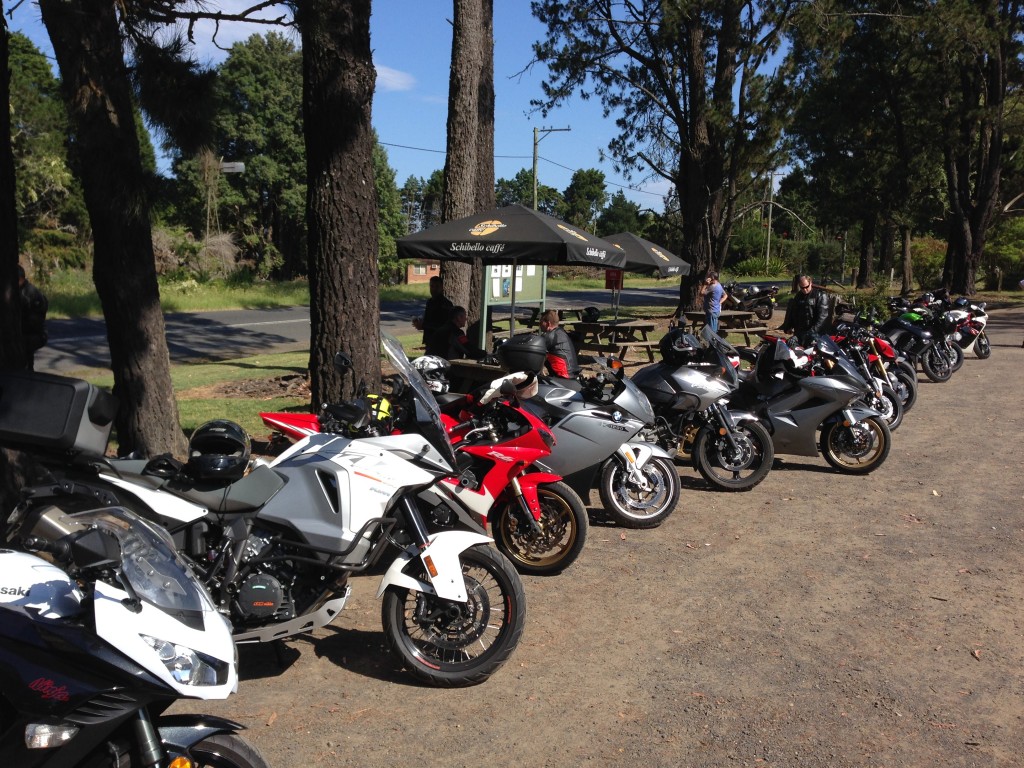 After a break I was expecting to head back to Wollombi but the crew had planned to head down Bumble Hill to Yarramalong and out to the Hue Hue Road. No probs there.  After that a quick F1 Freeway entrance and exit onto the old Pacific Hwy back past Doyalson, the Swansea Bends and into the Saturday morning traffic.

I wasn’t sure where the final destination was however this route took me to within a kilometre of mea casa so I waved adieu to the group and made it home for an early lunch.

The KTM 1290 Super Adventure continues to impress as I develop a closer relationship between the seat and the bars with it. Thanks DW for the invite!