A fellow Iron Butt rider, Rob, left Byron Bay at 4am this morning to kick off a 6 day Trans Australia Insanity.  This means he plans to ride to Denham in Western Australia and back to Byron bay in 6 days.  I couldn’t get up to Byron to see him off but when I got up this morning I thought I might head out and see if I could get ahead of him and keep him company for a while.

A quick look at the timing I expected he’d do and I was in for a chance to intercept him a Gunnedah with a plan to ride with him to Gilgandra then head home.  I started packing the KTM1290 Super Adventure and digging out my riding gear.  Time slipped by and I managed to get out of the house by  7.50am or so strangely looking forward to a bimble up the New England.  I wasn’t on the IBA clock so the holdups weren’t a bother.  There was a bit of traffic about so Singleton was slow but all in all it flowed quite well.  When the opportunity presented itself letting the LC8 loose on an overtaking manoeuvre  made short work of the slowies.

I topped up the tank at Scone and in that area started to see lots of old holden utes driving around.  I wondered what had brought them out.

Heading towards the mountains behind Murrurundi the clouds were dark and low.  I’d seen this on weatherzone this morning when I was deciding my route, based on what I saw I should only touch the back of it and turning left at Willow Tree should see me clear of it. After turning left I passed the nominal plodder engaged in upsetting someone else’s day early in the piece so I kicked back and cruised at $1.00 + GST.

I wasn’t entirely sure where I was up to in terms of Rod’s progress but I decided to finally take a trip up “Who’d A Thought It Hill Lookout” at Quirindi.  I’ve ridden past it too many times and was finally rewarded with a pretty great 360 degree view that was not only great to look at but confirmed that my thoughts of being behind the rain were completely wrong.  It was only a couple of minutes. 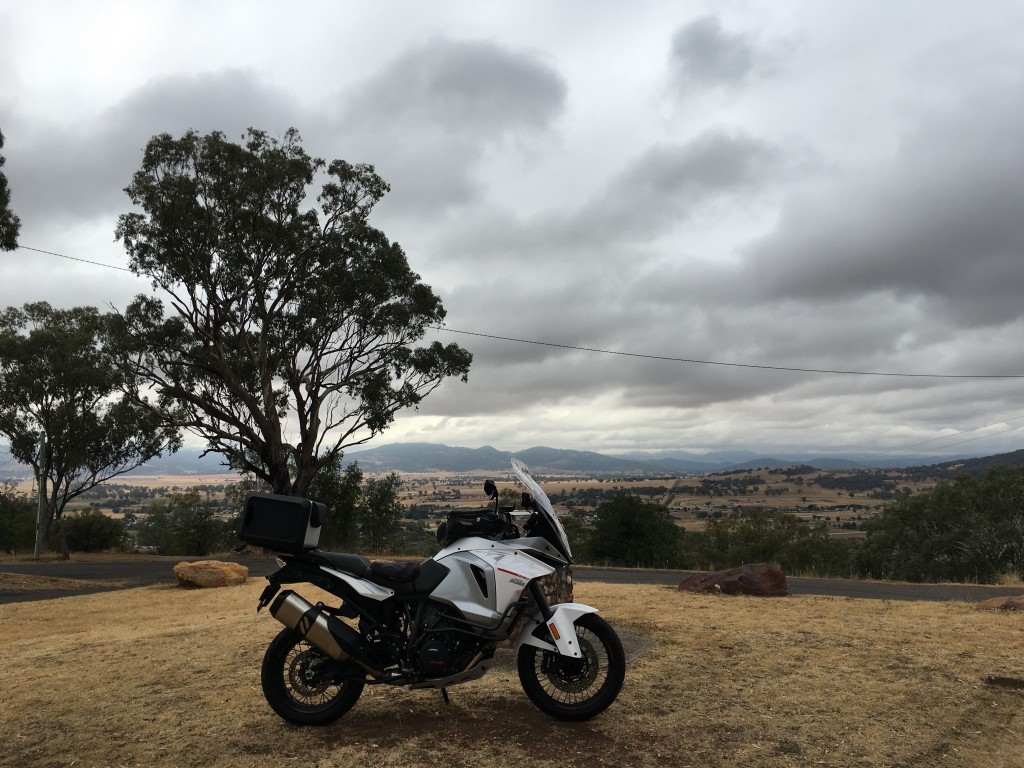 Breeza, Curlewis passed by and soon enough I was in Gunnedah.  I pulled up, took out the iPad and checked Rob’s last location. Oops, ten minutes ago heading towards my current location.  Rob must have been on a mission! However, that was a worst case scenario for intercepting him.  It didn’t provide sufficient info to indicate if I was ahead or behind him.  Looking at the distance he was travelling between SPOT pings though my gut told me I’d missed him but not by how much.  The only thing to do was keep going until I could see another location on him 10-20 minutes.  I decided to high tail it to Mullaley and re-evaluate. 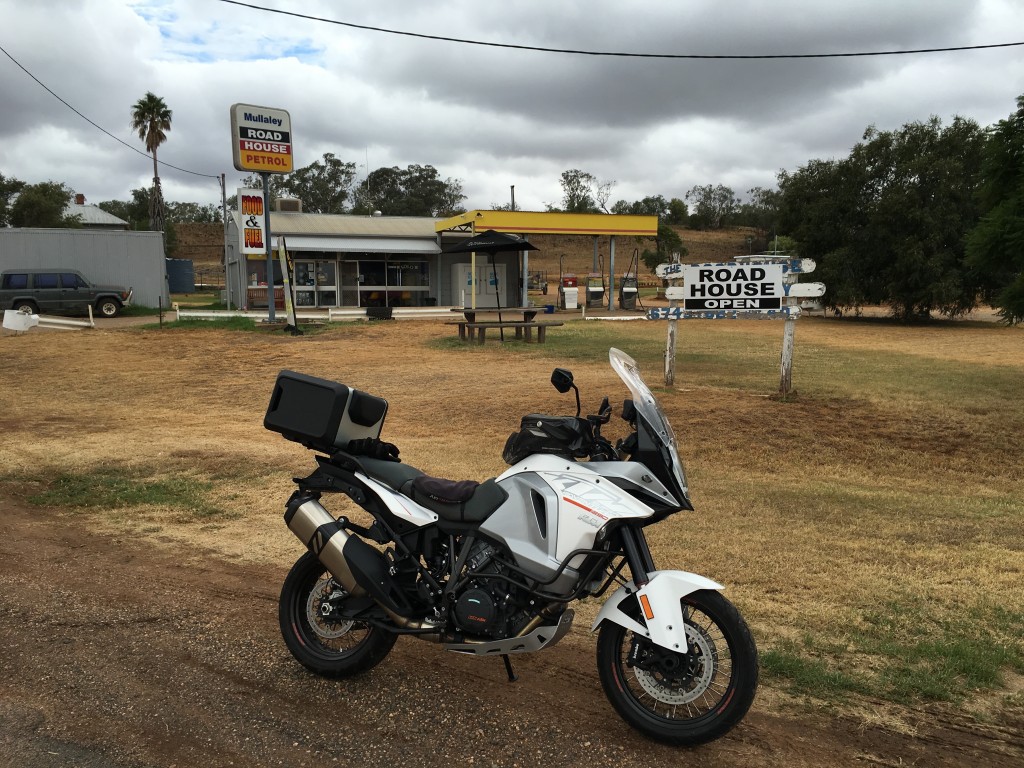 I stopped at the Roadhouse and checked the iPad again.  Rod’s last ping was just past Mullaley and 10 minutes before.  There is absolutely no legal way you can make up 10 minutes on an efficient IBA Rider over the 200 or so kms so it was “Don’t chase Rob”. The rain I had seen building in the west was also in the direction Rob was heading, I could hear the Black Stump calling me “Turn left Wom, Don’t chase Rob!” So left it was, towards Tambar Springs, but not before zipping up the vents in the KLIM gear and putting the rain cover on the tank bag.  The rain was heading towards me and I was going to get wet.

The showers didn’t last long and frankly were quite refreshing.  While heading towards Coolah I realised I’d been riding for over 5 hours without a sustenance break and was getting a bit thirsty so I took some time to have a quick stop at the Black Stump Rest Area.  This was another location I’d just ridden past too many times so a quick break and photo was in order. 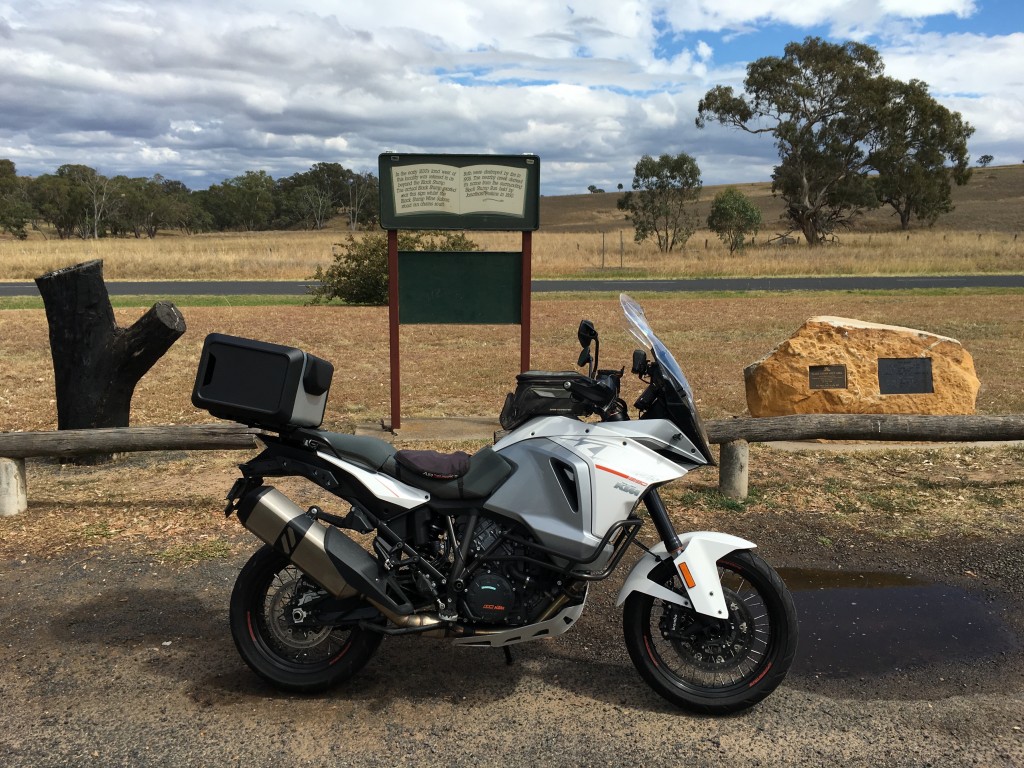 While there I decided to have a proper break at the Coolah Bakery.  They make a decent assortment of good food in pastry and a better than average coffee.  Parked outside was the Purple People Eater, another of a plethora of old Holden utes I had spied today. 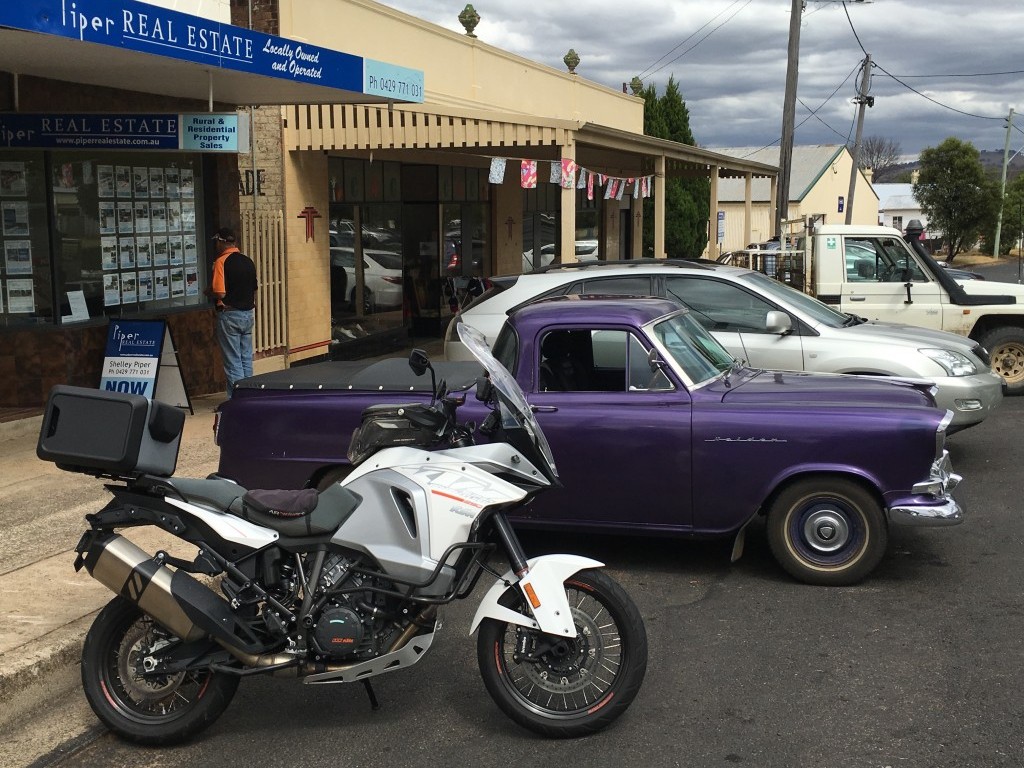 It’s driver was keen to chat and I discovered there’d been a gathering of the faithful at Toowoomba and they were all heading home. So was I.  I took Cassilis/Vinegaroy Road towards Merriwa, fortunately this time there was no pea soup fog, no cattle grazing and no roos in sight which was a marked improvement from my recent ride up here.  A lefty onto the Golden Hwy  then a quick stop for fuel, that wasn’t really needed at the time but one stop was likely needed before home and it’s as good a place as any. 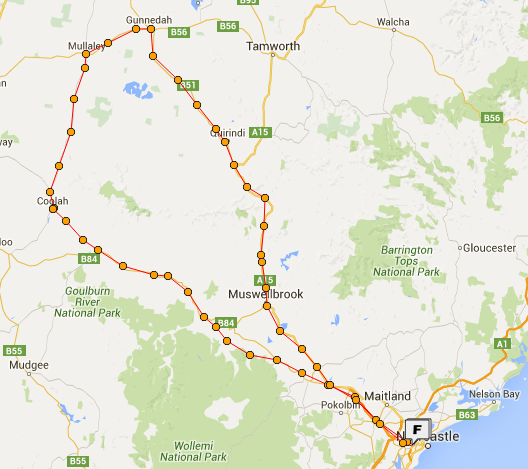 After Sandy Hollow I took Rosemount Road to the back of Denman and then Bureen Road which is a fantastic little diversion that brings you back onto the Golden Hwy at Jerry’s Plains.  From there it was a textbook trip back to the Hunter Expressway and home by 4.20pm.  A touch over 700kms for the bimble, not a biggy but it was great to stretch the KTM’s legs, and mine.

Meanhwhile Rob’s west of Cobar oblivious to the fact he nearly had a companion for a while as he counts down the 1950 k’s he’s riding today to Port Augusta.  Good luck Rob, might chase you down on the way back when we aren’t going in the same direction!