It’s been a little while since I’ve clocked up a few k’s because I’ve spent the last few months dedicated to testing the edges of my Kawasaki H2 SX SE on the local twisties. I recently noticed on social media that Rob had mentioned a loose plan to ride to McKillops Bridge in the Victorian High Country after dropping in to a FarRide scheduled for lunch at the Bermagui Hotel.  I got in touch with him and almost immediately a proper plan was hatched that didn’t involve me camping.

So it was time to dust off the Super Tenere, yippee!  I was up at 3am and ate a quick breaky, threw on the the riding gear making sure to zip up because the radar showed Some sketchy weather about.  I was away by 4am and shortly after found myself riding through the Central Coast in some light and not too inconvenient showers which didn’t last long.  The plan was to meet another rider, John, at McDonalds Thornleigh and then to the 7-Eleven Pheasant’s Nest to meet up with Rob. It all went smoothly for John until there. He had also planned to meet some other riders at Pheasant’s nest who hadn’t all shown up. Our plan was for an 8am breakfast at the Paragon Cafe in Goulburn we left him to wait for his friends. Rob and I arrived at the Paragon right on time. 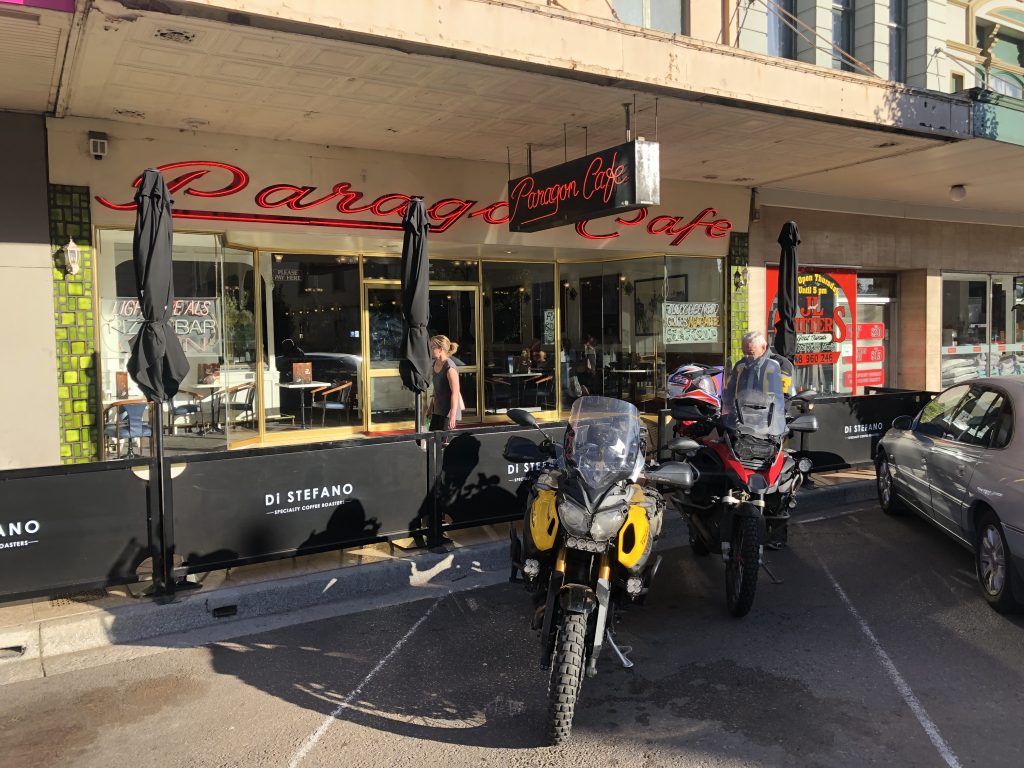 After a healthy Veggie Breakfast and a an hour long catchup we set off for Bermagui via Braidwood. Sadly the bends down to the coast were choked with slow traffic so the opportunity to polish the bottom of the Pivot Pegz did not arise. We turned south at Batemans Bay and frankly I’m not  huge fan of this section of the Princes Hwy. However soon enough we arrived at Bermagui and it was great to catch up with great riding friends from all over the place. 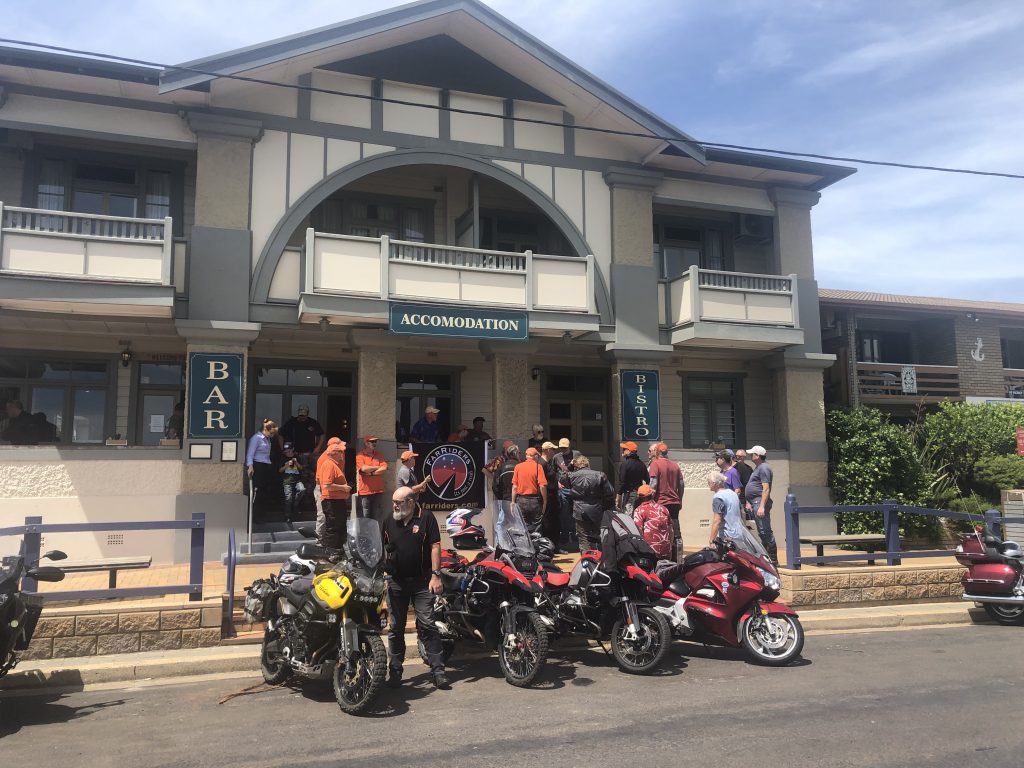 An hour and a half later it was time to head off. Many of the other riders had already dispersed in order to finish their 1000km day ride to qualify for the FarRide. My plan for today fell a little bit short of that distance, never mind. The ride out of Bermagui towards Bega, then down to Eden crossing into Victoria to Cann River is just beautiful.  Traffic was light and the road surface was generally good. Rob wanted to stop at Relics at Cann River for a short break, sadly the Bakery had already closed. 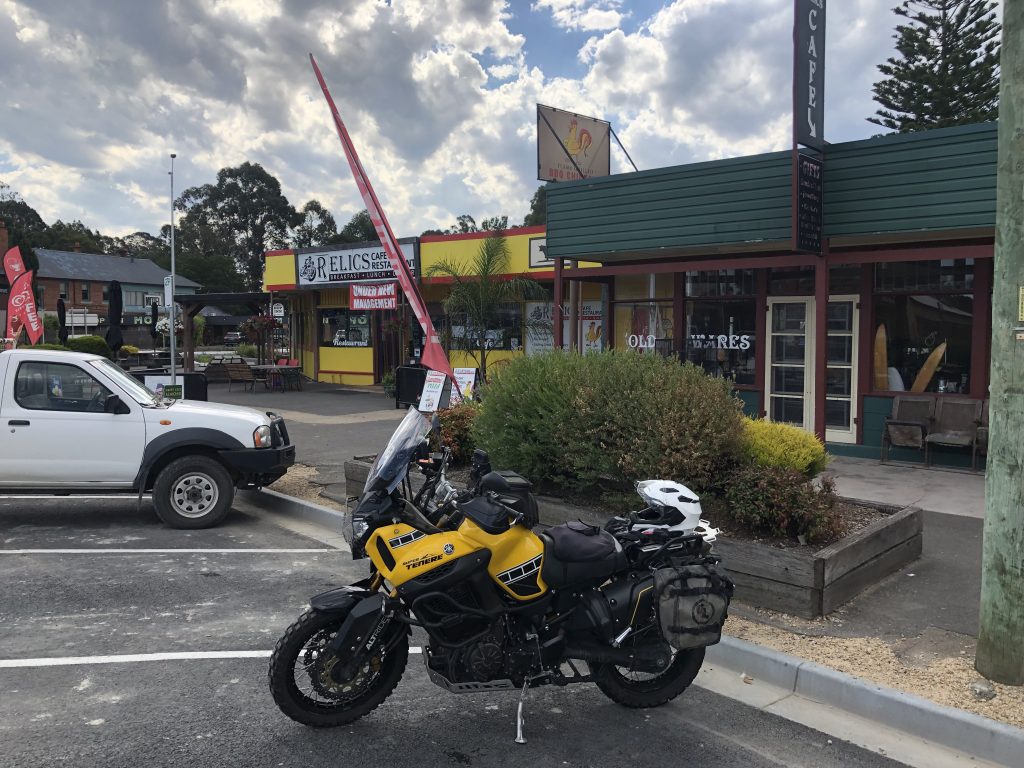 A short while later after some gravel surfing on roadworks we arrived at Orbost, our home for the night. The day’s ride a tidy but easy 900kms or so.

At Orbost we happened to meet up with another Long Distance rider, Nicho, who was staying at the motel across the road from ours.  We caught up with him for dinner at the “Bottom Pub” which we were told was the best food option of the three venues in Orbost.  The other two were Club Orbost and the Top Pub. Nicho has ridden most of the tar and dirt in this area, it was good to get some local knowledge and great to catch up with him.

We weren’t sure what breakfast options might be available in Orbost on a Sunday morning so we decided to meet outside the motel rooms at 8am.  I was ready by 6.30am, Rob was fully packed by 7.30am, I don’t think either of us are used to starting a ride that late and it felt a bit weird even though we didn’t have all that far to ride today.  Fortunately for us Chooky’s Roost was opening at 7.30am and the obligatory B & E Roll was devoured along with a Chai Latte on Soy. We also topped up the water supplies.  There was some real fun riding coming up but not much in the way of services. 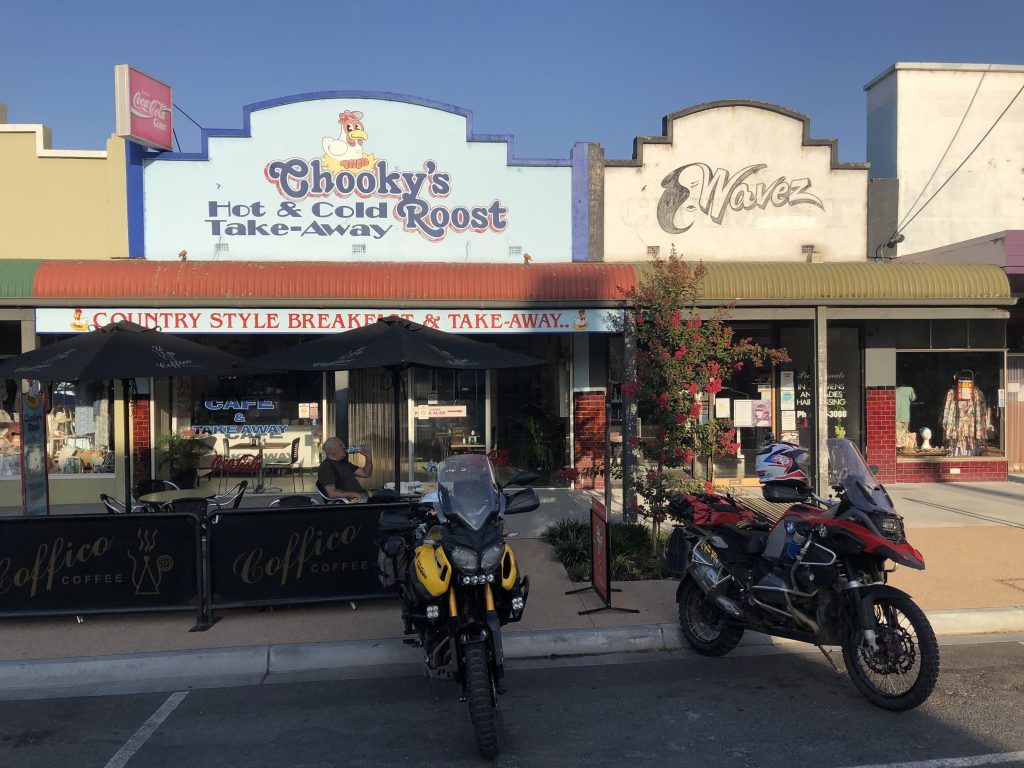 At Orbost there is one of the two bridges in Victoria the cross the Snowy River so it made sense to grab a pic here given we were going to the other one today! 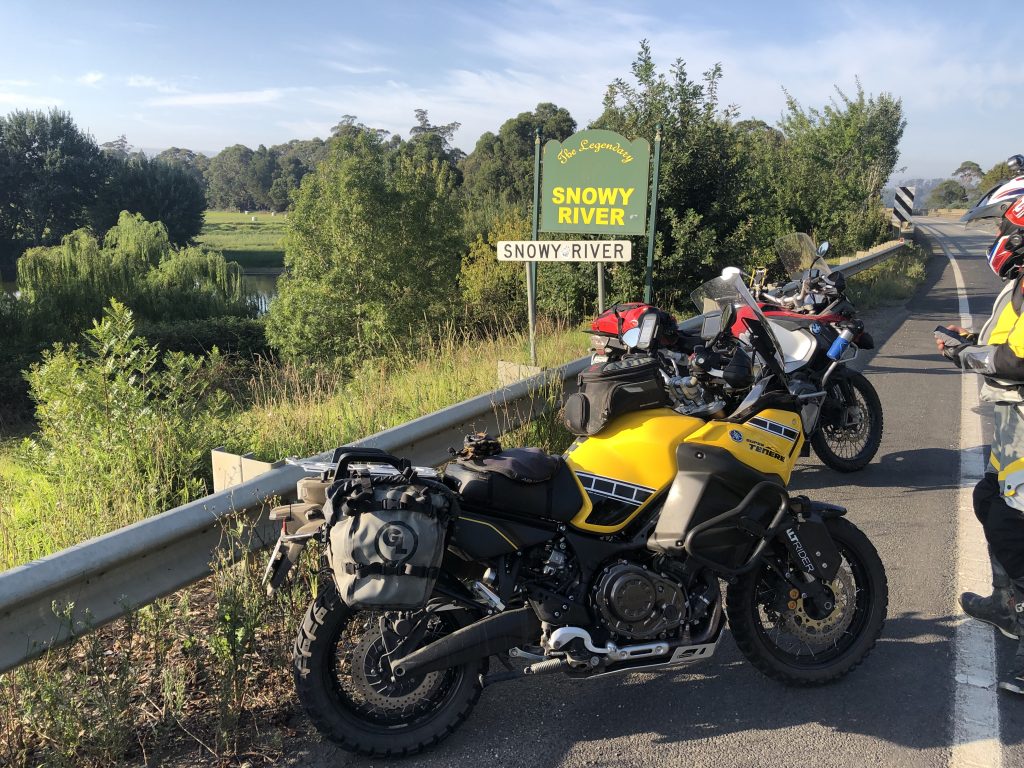 We took the Orbost – Buchan Road next and almost immediately came upon this impressive, disused rail structure. It’s easy to see from this pic what a beautiful morning it was! 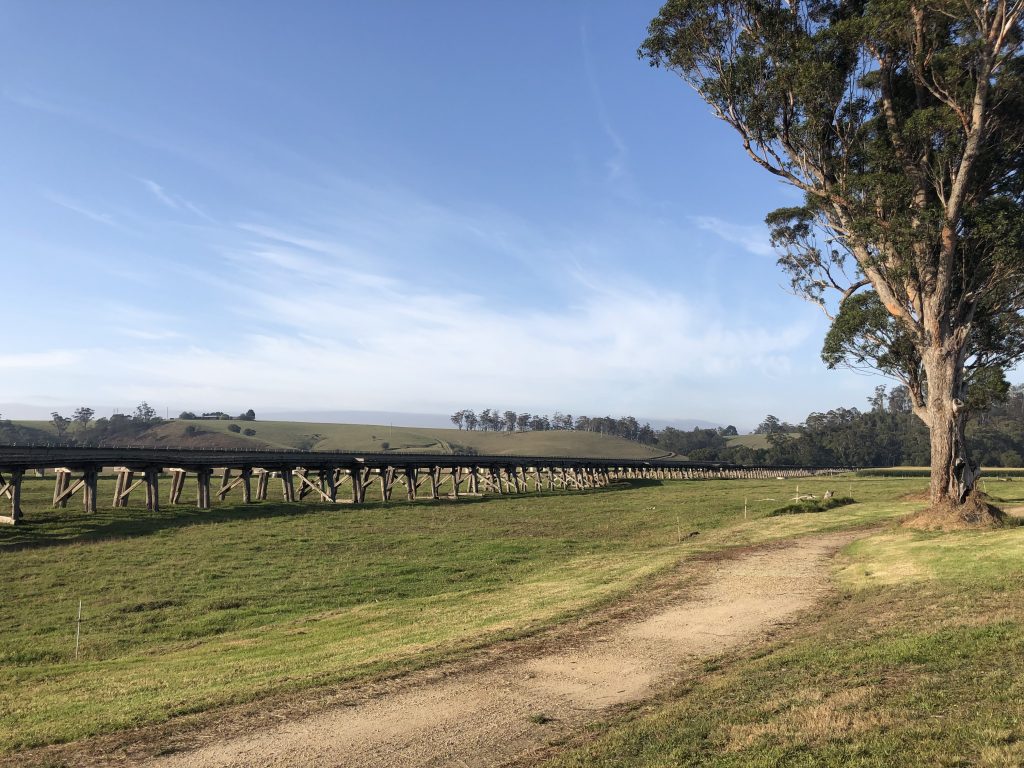 The road to Buchan through the Gippsland forests was great fun. In some sections there was gravel across the tar which made it a little interesting but if you are in the area, ride that road!

At Buchan we met the Snowy Mountains Way and also a “Road Closed Local Traffic Only sign” on the side of the Road. We’d noticed there was a bit of smoke about and decided to head further up into the mountains and see if we would be turned back. We didn’t really have too many options to get home from this location. The smoke was from controlled burning off and after a while it cleared up and we were back in the sunshine.  We eventually arrived at the turnoff to McKillops Bridge and I was excited to be heading there. 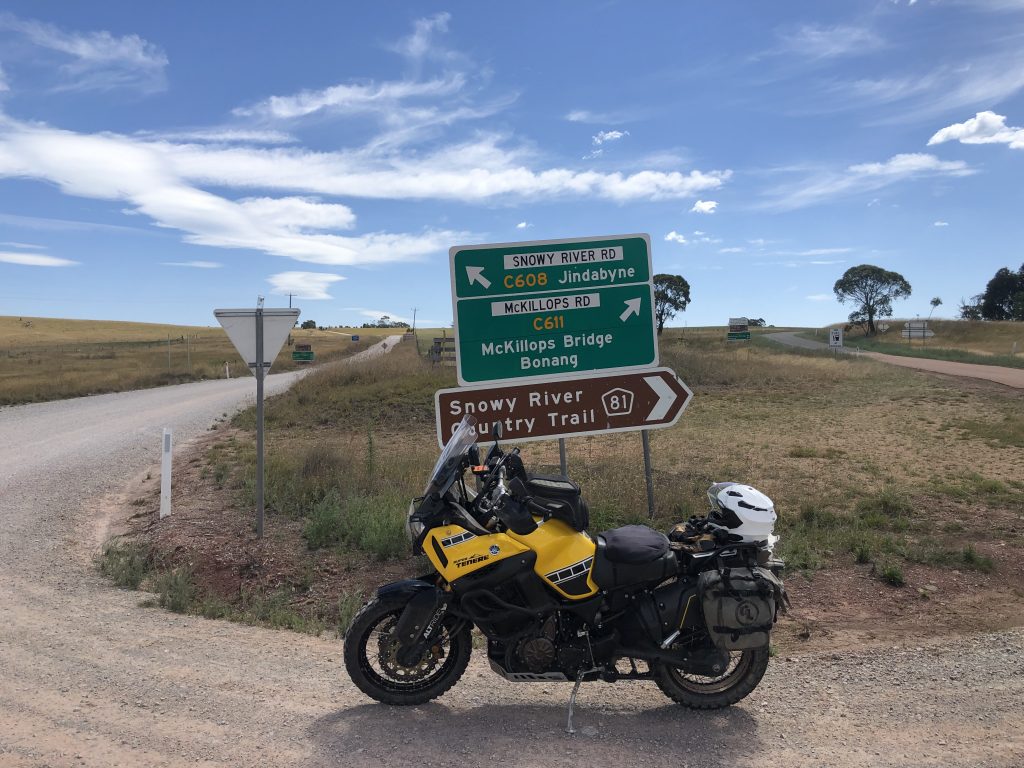 Our plan was to ride down, check the bridge out and ride back out the same way.  We had an option to ride in (or out) via the Bonang Hwy but we rode that in November last year.

On the way down the hill we passed this sign which adequately described what was to come. 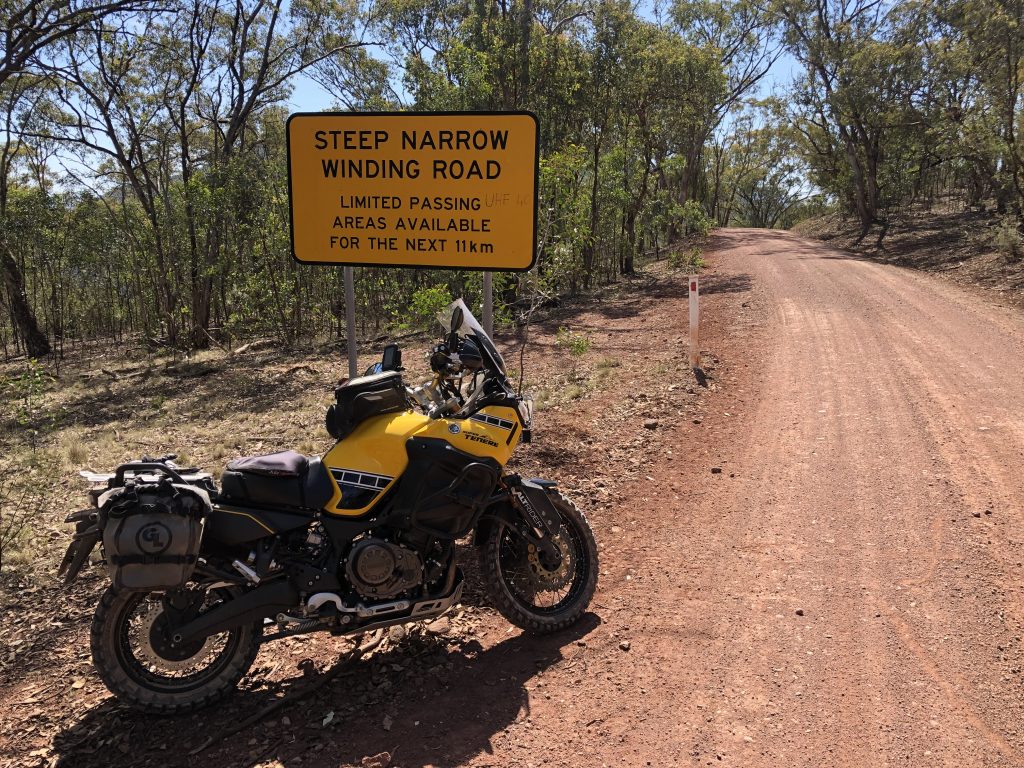 We didn’t have any problems riding our big Adventure Bikes on McKillops Road but making a mistake on many of the corners would have been costly. It was unfenced and the drops over the edge were spectacular. Eventually though, we made it to McKillops Bridge and rode across. 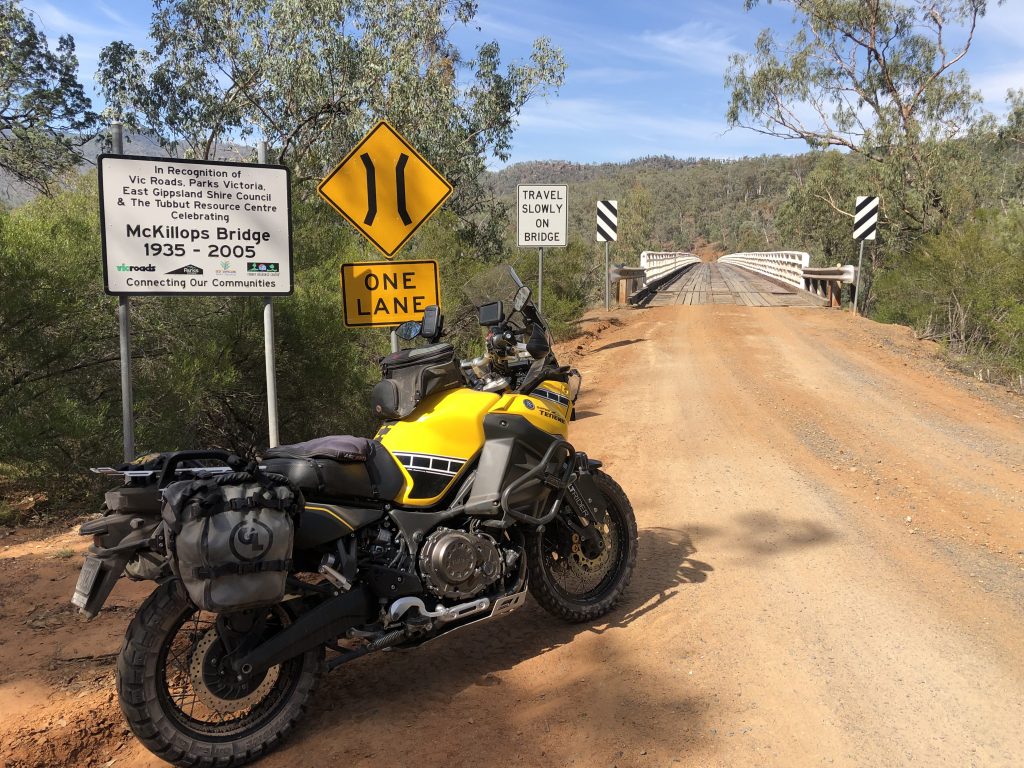 It’s impressive and it’s in the middle of nowhere.  It’s also the second of two bridges that cross the Snowy River in Victoria. 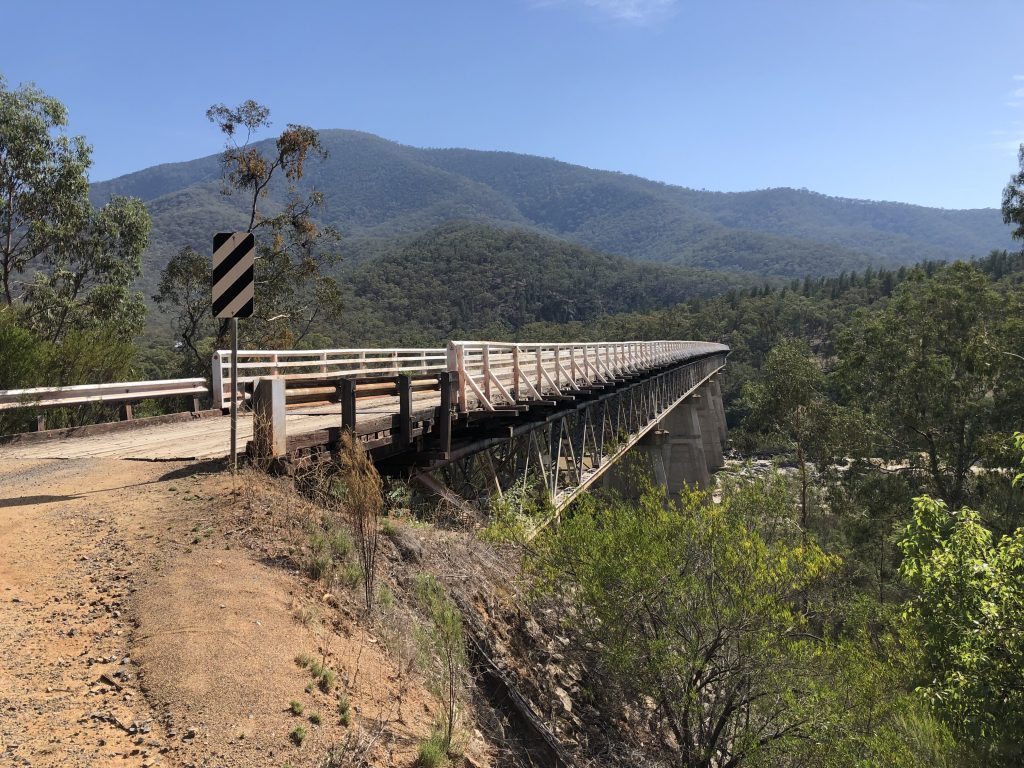 There’s a picnic area/camp ground at the Bridge and some interesting historical information to read.  Apparently two days before the original bridge was to open a flood washed it away so it had to be rebuilt higher.  As I understand it the original bridge was at the height of the top of the concrete pylons in the photo above and it subsequently flooded to that height without washing it away. That would have been a lot of water!  Here we are in the rest area looking towards the road to Bonang. 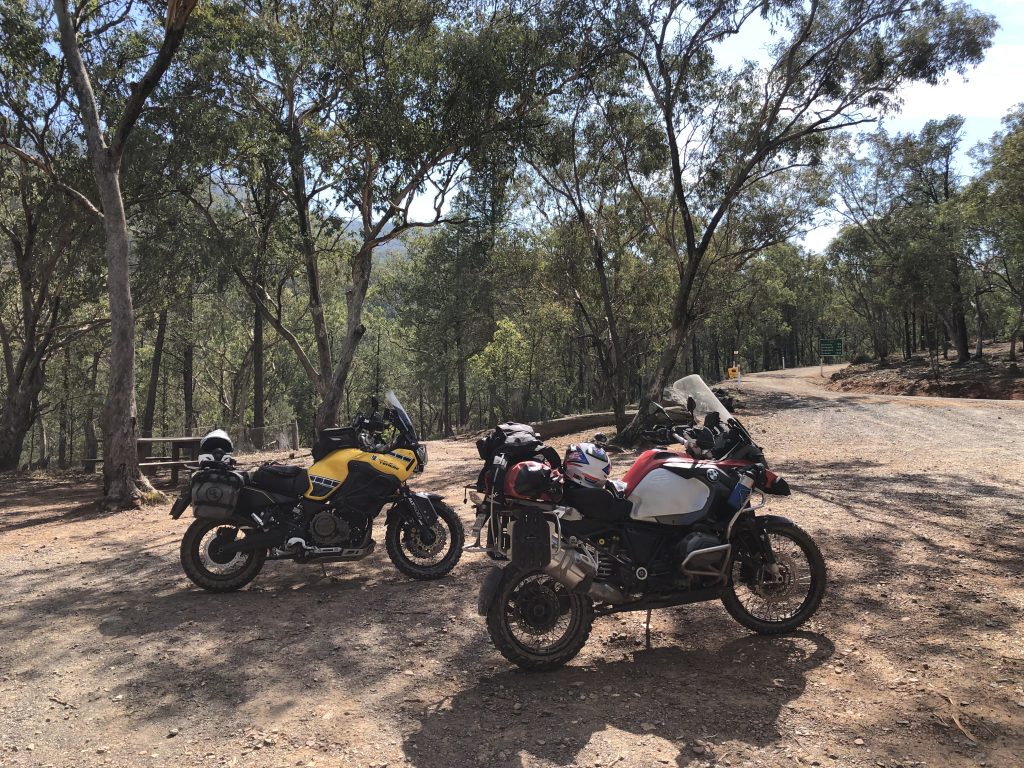 While riding back up the hill I took a moment to photograph the valley and the drop off into it. It wasn’t the steepest part but there was a shortage of places wide enough to stop to take pics. Rob’s brother also rode his triumph past us along the way, they were apparently stunned to see each other there… it’s a small world! 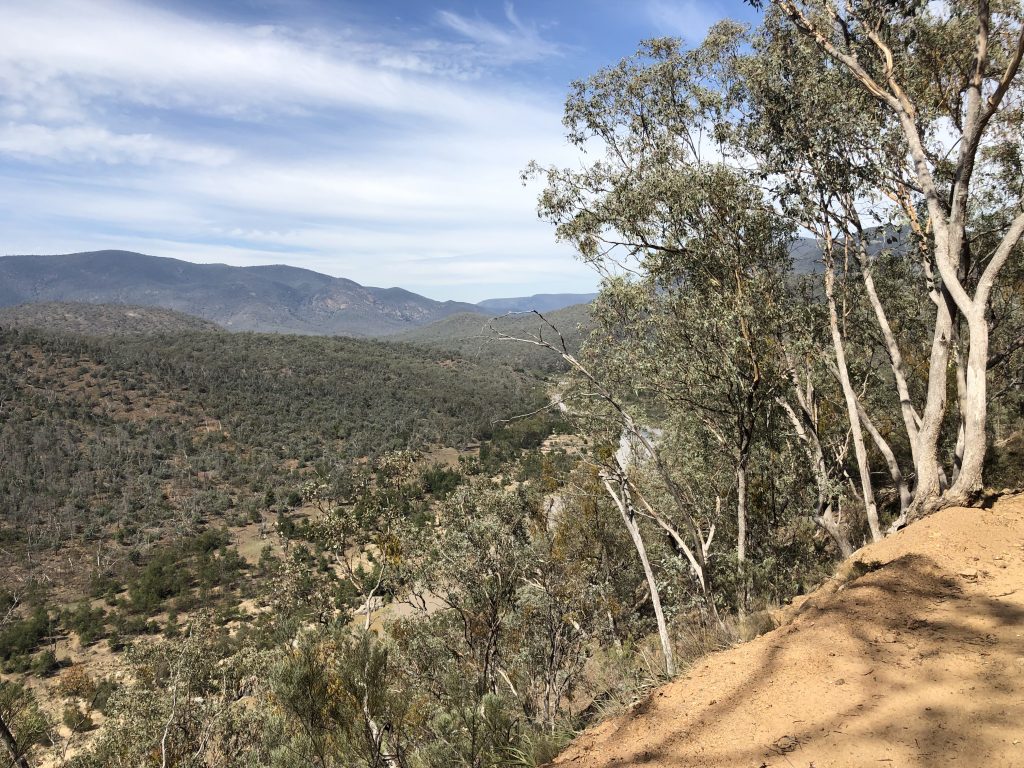 Back out onto the “main road” the Barry Way took us through Suggan-Buggan with it’s entirely wooden schoolhouse built in the 1860’s. It’s seriously in the middle of nowhere and it’s amazing to thing that people lived in this area back then.  There must have been good money in logging! 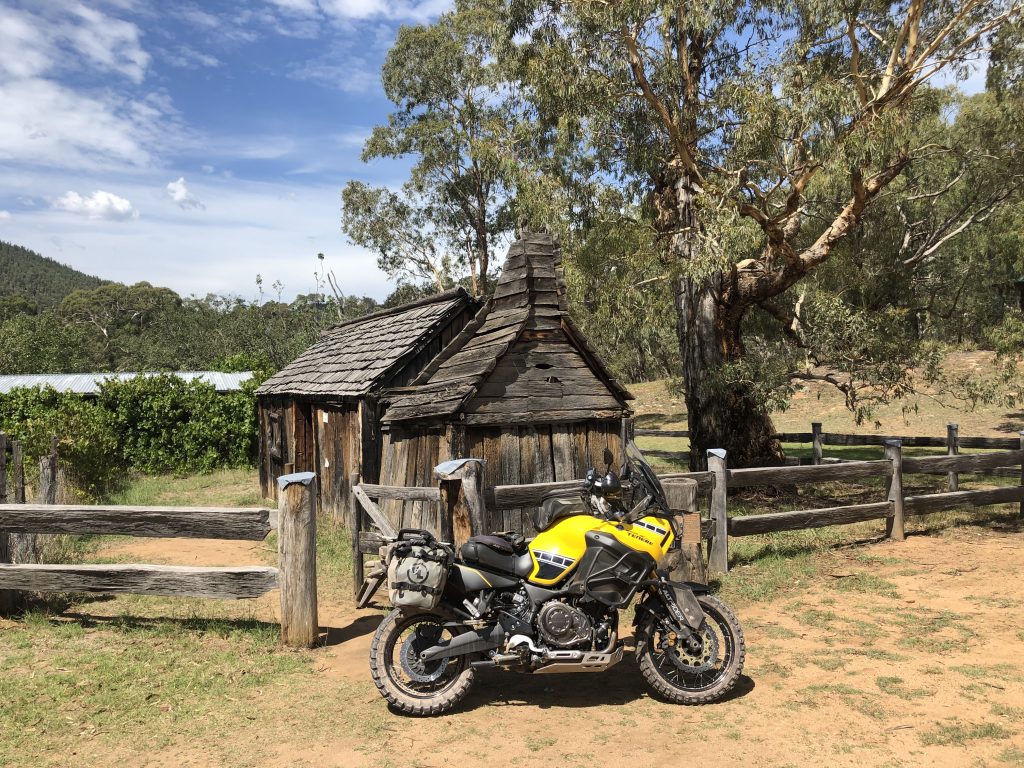 The Barry Way generally followed the river at various heights above it and we eventually dropped down to the NSW / Victoria Border at river level where we stopped for a drink and a short rest.

The riding wasn’t too technical, traction was a bit uncertain on some of the road surfaces but you certainly didn’t need to be an expert to stay up on this road on a big bike. 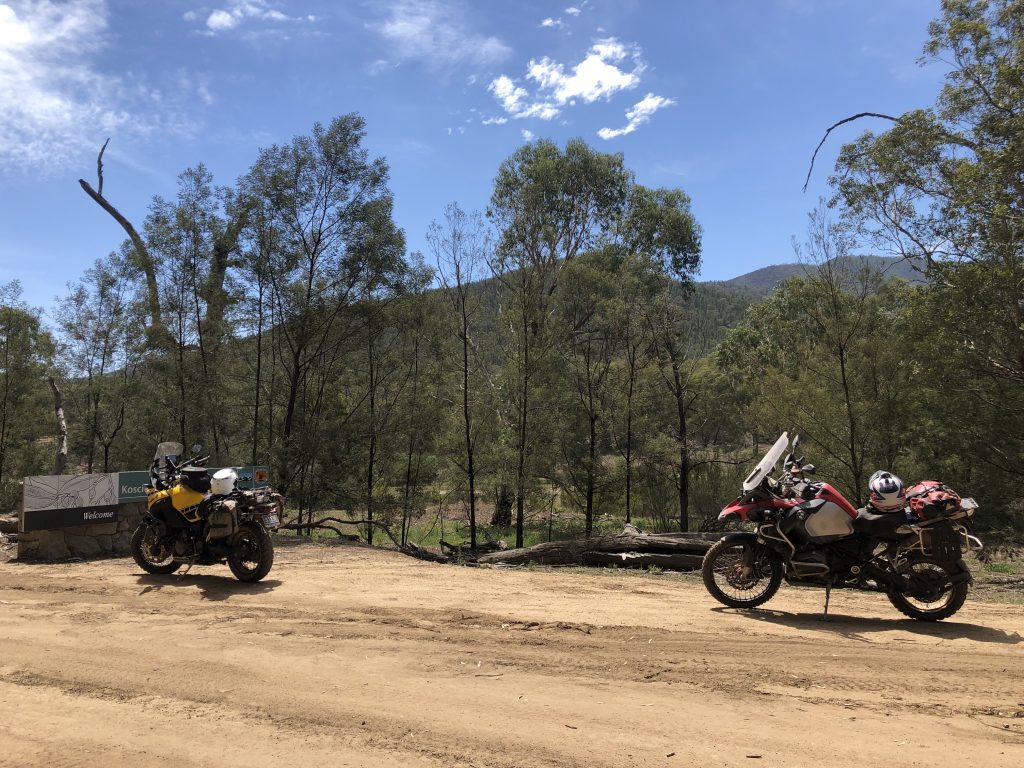 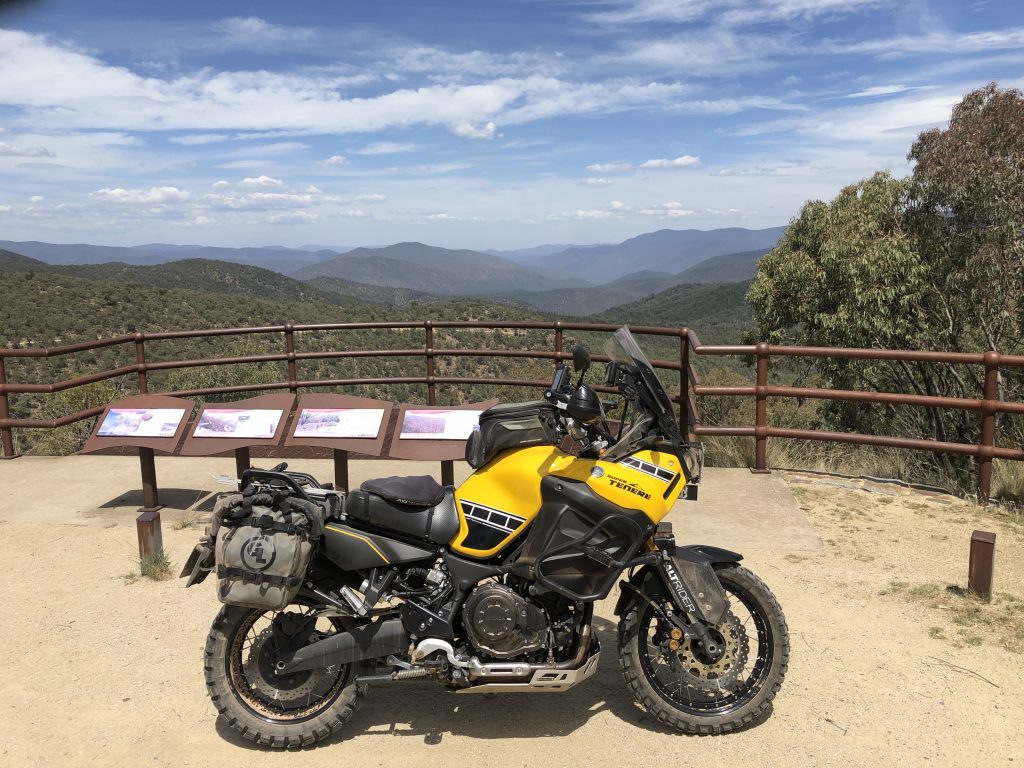 It was worth taking a moment and a pic without the bike in it. What an amazing view! 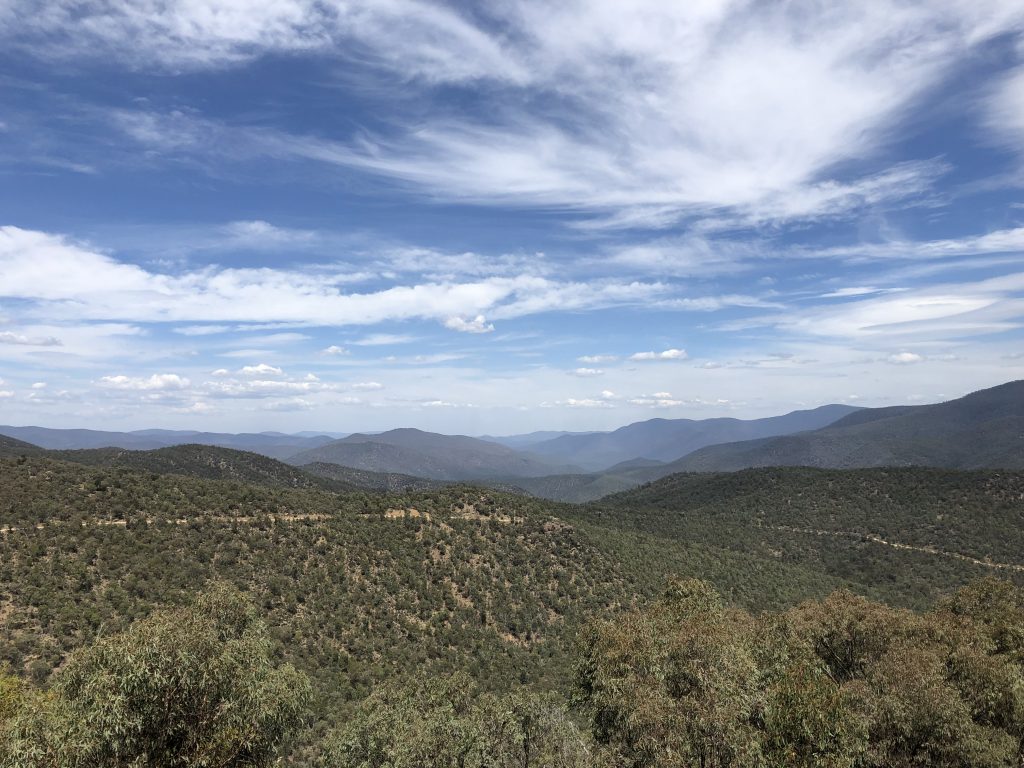 We arrived in Jindabyne about 1.20pm and stopped for fuel and an iced coffee. Rob’s easy to ride with, we are on the same page most of the time, almost without saying it we both new our next stop was 272kms away, Trappers Bakery at Goulburn for a pie and the last fuel stop for the ride.  There we said our goodbyes and it was back on the slab for an easy ride back to Newcastle.  I waved Rob off as he turned onto the M5 and stopped briefly to change my sunglasses for clear ones at Thornleigh. It was one of those perfect evenings, clear, mild temperature and I felt like I wanted to just keep riding and riding and riding .  Instead I arrived home about 9.30pm.

Another 900kms done today, and for some of it, dusted quite nicely thanks!  What a great weekend out on the Super Ten! I suspect I might be riding some of this route again in the next few weeks, I can’t wait!