After a really good night’s sleep Rob and I  were keen to try the Dungeness Crab Omelette that we’d seen on the breakfast menu at the Hotel Seward’s restaurant. Sadly it was a little underwhelming, but that may have been because they had recently lost a chef. We did see a Musk Ox in the lobby though.

With food in the belly and a clear head it was time to pack the bikes and head out of town. We didn’t rush though, as it was still raining and cool. I jumped on the H-D Ultra ready to lead the way but Rob didn’t quite follow me.  He had decided it might be better to ride on the correct side of the road while in town. Ooops!  Lefty Loosey, lefty loosey goosey. We stopped for fuel and then a pic at the Benny Benson Memorial.  Benny, a Seward local, won a competition to design the Alaska State Flag in 1927, you can see it on the memorial. 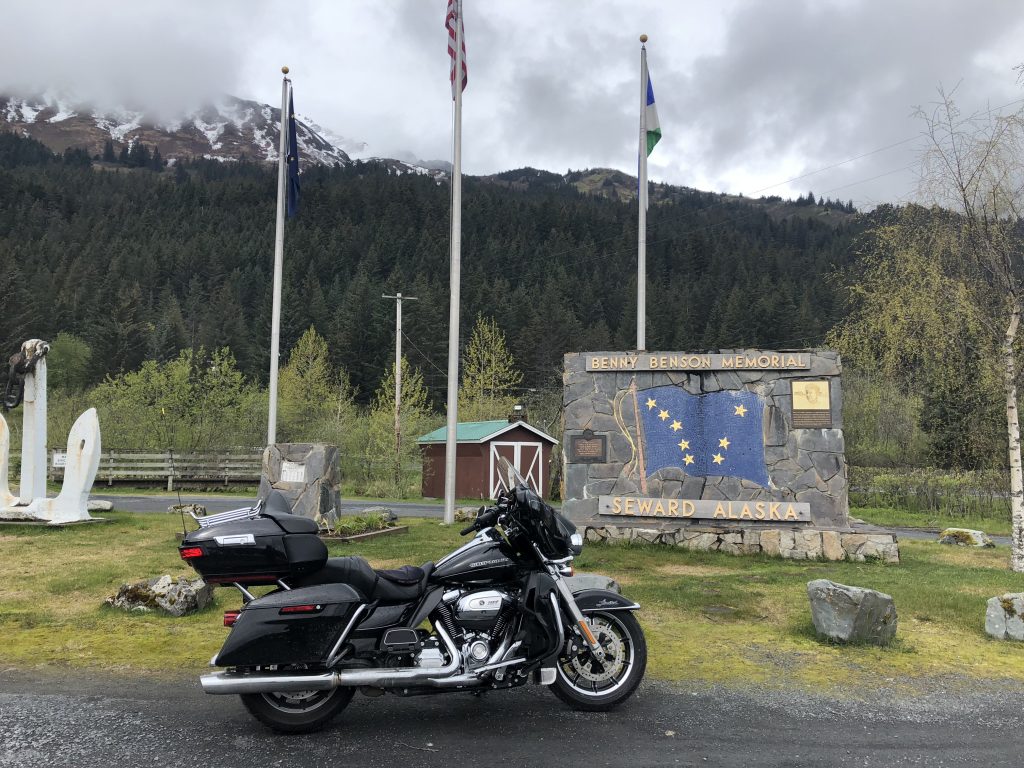 The tops of the mountains were in cloud but the rain came and went so we still got the opportunity to stop to take pics of interesting things. This dodgy looking rail bridge is still in use. 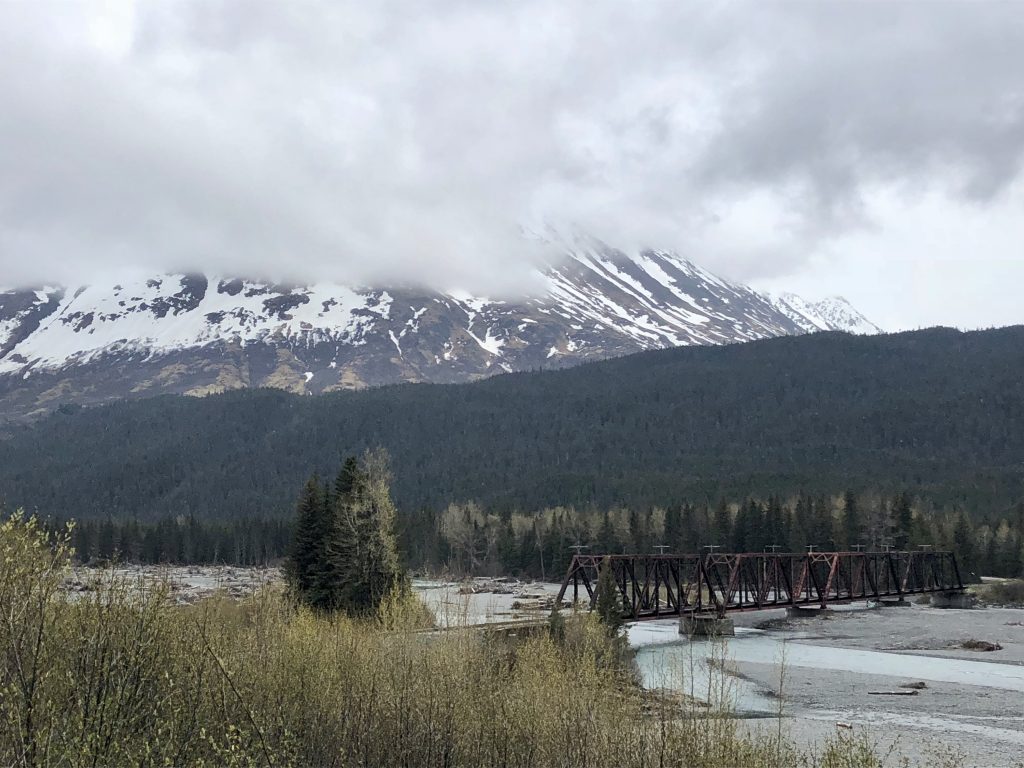 Yesterday when riding through Moose Pass we weren’t in the mood to stop to see what Moose Nuts were, but today we stopped at the Moose Drop-In Trading Post to find out.  They were mainly sugar coated roasted nuts of various descriptions but the home-made fudge was a hit.  I tried some Orange Creme Habanero fudge, sweet on the palette with a red hot aftertaste.  I had to buy some of that! 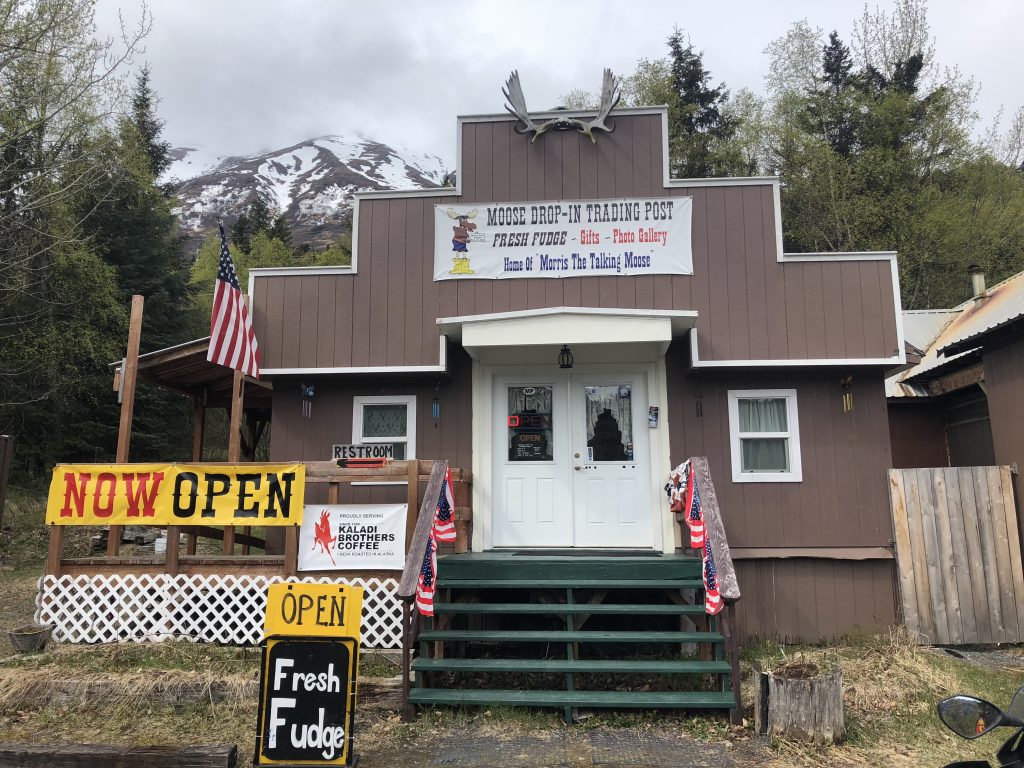 And if you didn’t want to go inside and meet the proprietors, who were very cheerful and friendly, you could serve yourself outside. 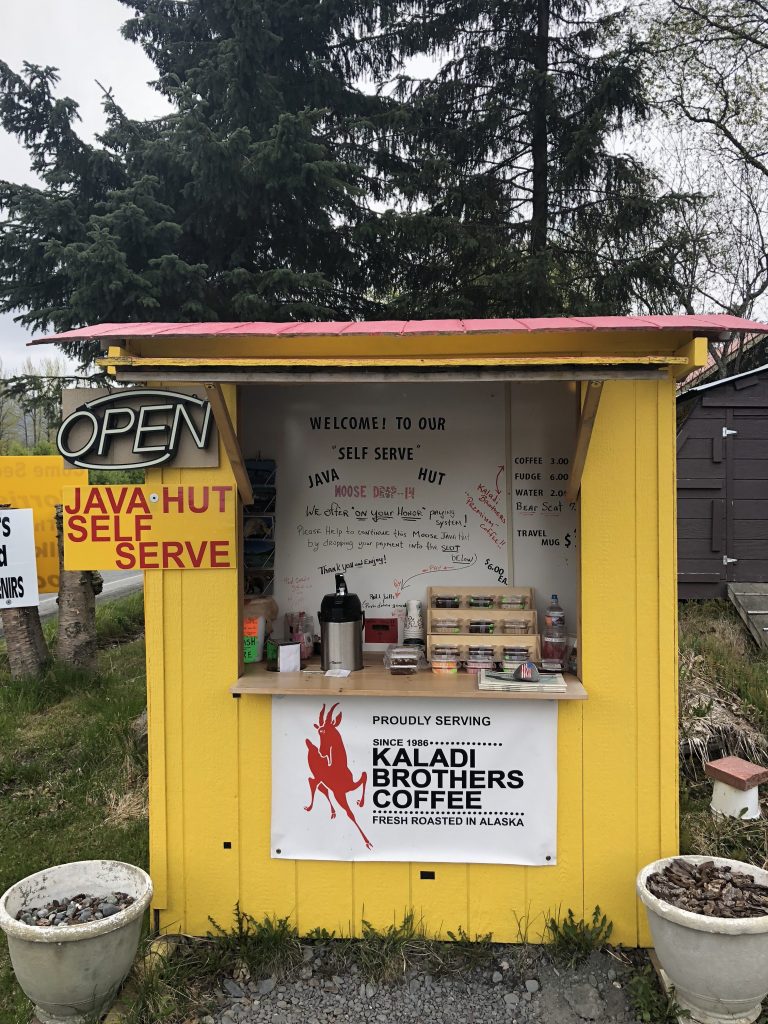 After Moose Pass we turned left onto the Sterling Highway. The clouds lifted off the mountains but it was still cool and grey. Kenai Lake looked fantastic from the road so Rob and I pulled over and hiked down to some rocks to get a better view and a few pics.

And if you aren’t in any of the pics you weren’t there. 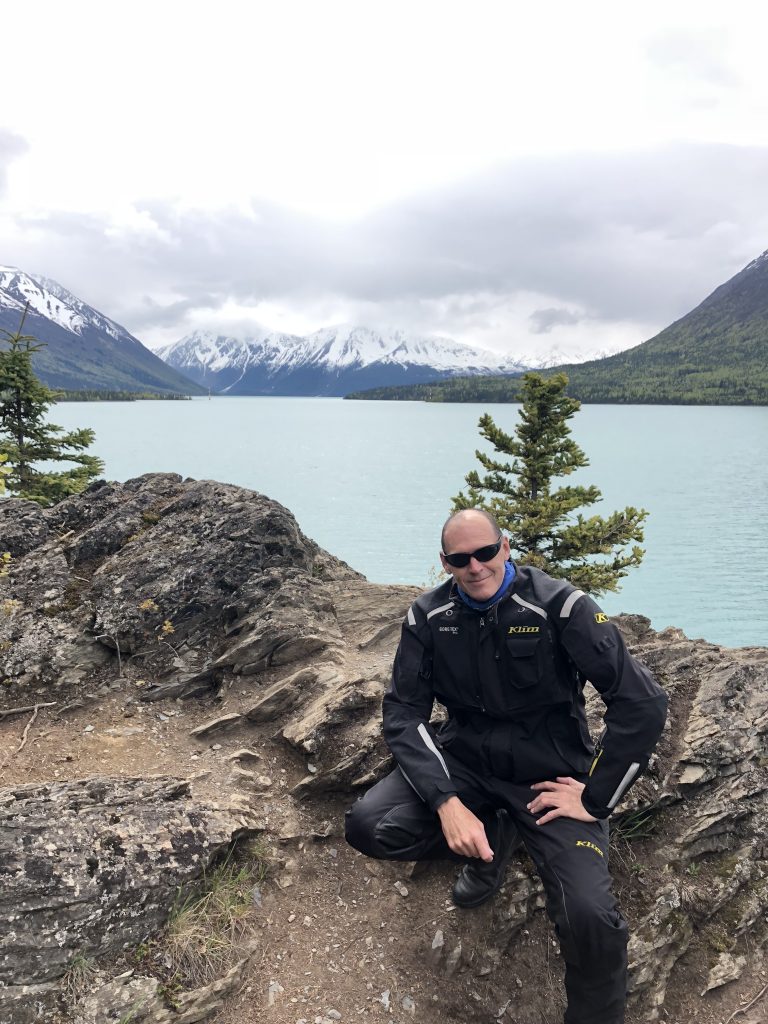 We rode through Sterling and turned right at Soldotna to Kenai with no real plan. Kenai is on the Cook Inlet named after Captain James Cook who sailed there in 1778 and one of it’s arms, the Turnagain Arm, was named by William Bligh of the HMS Bounty and who was later the Governor of New South Wales. These jokers really got around!  Anyhow, we were trying to get some photos of the Cook Inlet. 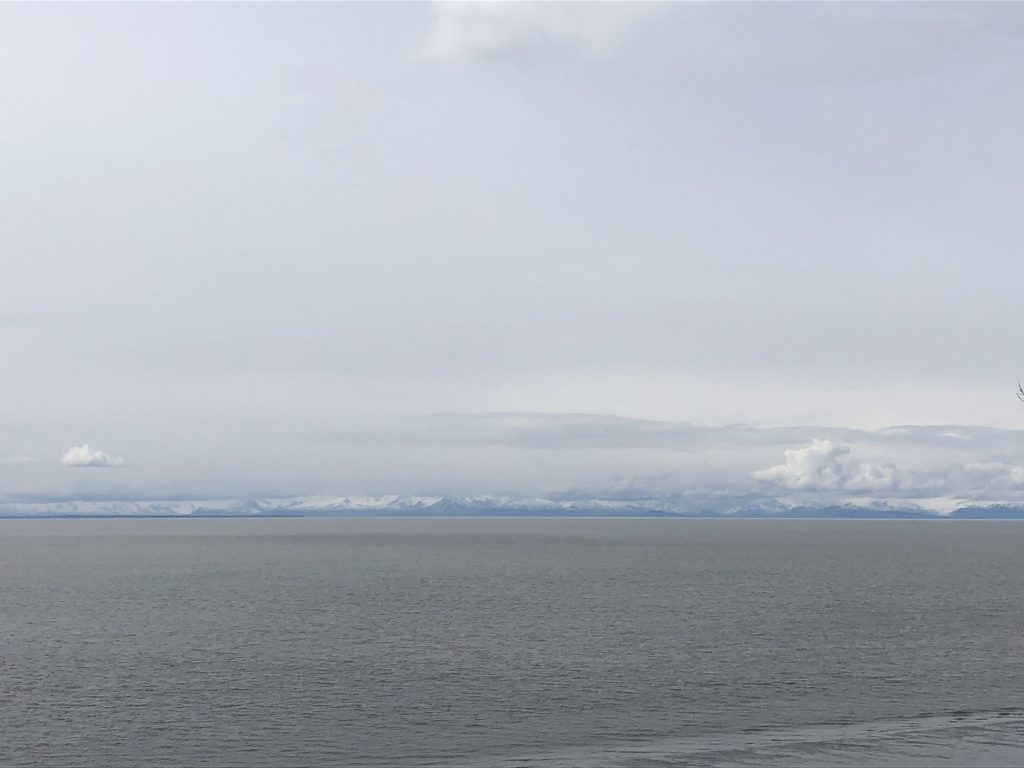 It’s big. And the among the mountains over there are 5 of the big volcanoes that make up part of the Pacific Rim of Fire.

Then we quite by chance happened upon a wonderful Russian Orthodox Church, the Holy Assumption of the Virgin Mary,  that someone in Anchorage had told us to try to find but gave us no tips on how to find it. Lucky Us! 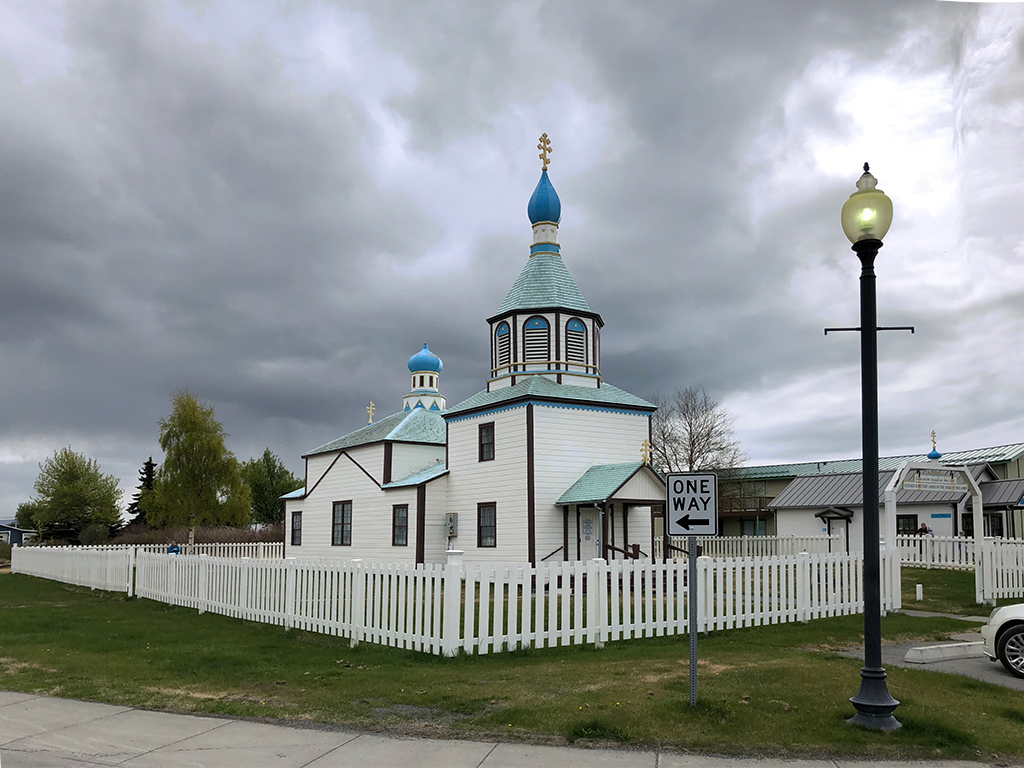 After taking a few more snaps of the Inlet we took the Kalifornsky Beach Road back out to the Sterling Highway and through Clam Gulch. My second favourite place name of the whole trip.  Another Russian Orthodox Church that I did remember the name of was at Ninilchik.  The Transfiguaration of our LORD Church. We grabbed a couple of photos there.  There’s lots of Russian stuff in Alaska, they had it before the USA bought it off them in 1867 for $7.2m. I don’t think anyone new about all the oil in the north then!

It started to cool down again, there were still a few showers about so we pushed south to Homer.  On the way into town we stopped for fuel and a little cookie. 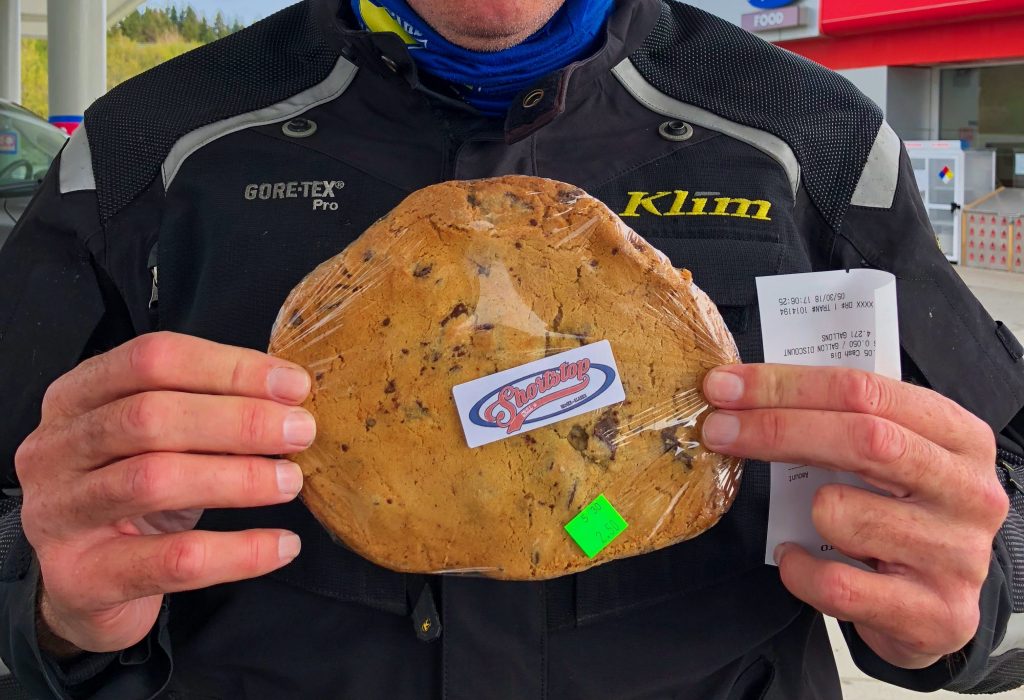 Then we checked in at our digs for the night, the Best Western Bidarka Inn. There was still some riding time left so we rode down to Homer Spit. What a cool, touristy place with lots of cafe’s, bars, souvenir shops and tour operators set up in rustic premises on this tiny spit of land right on the south western corner of mainland Alaska. 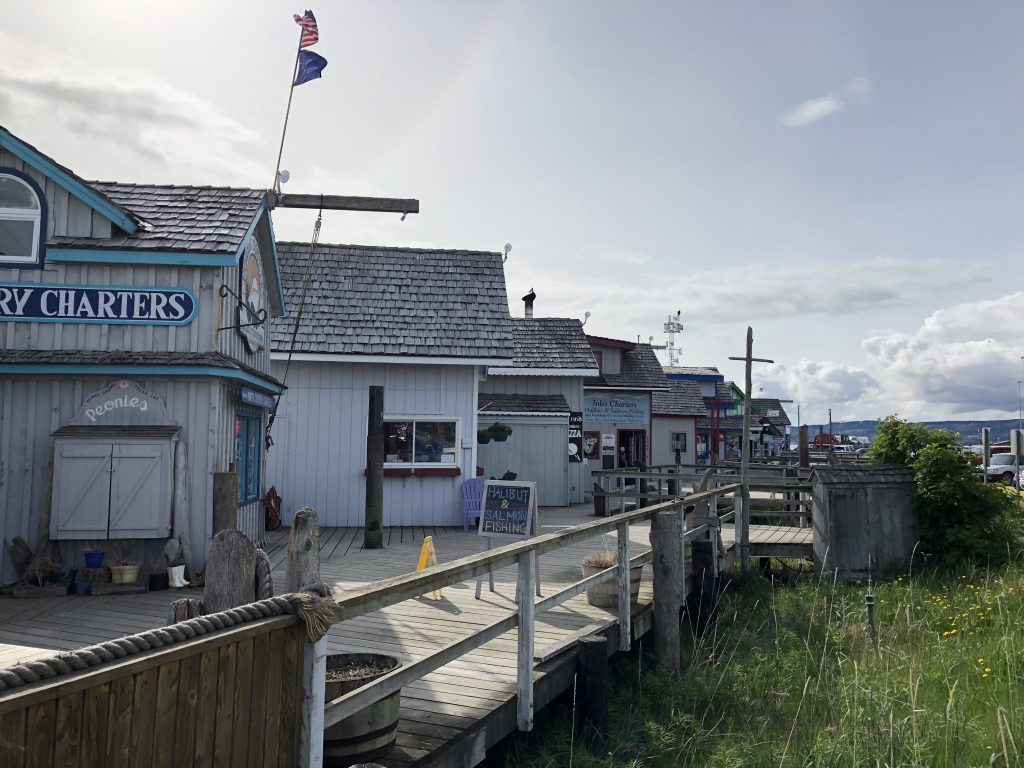 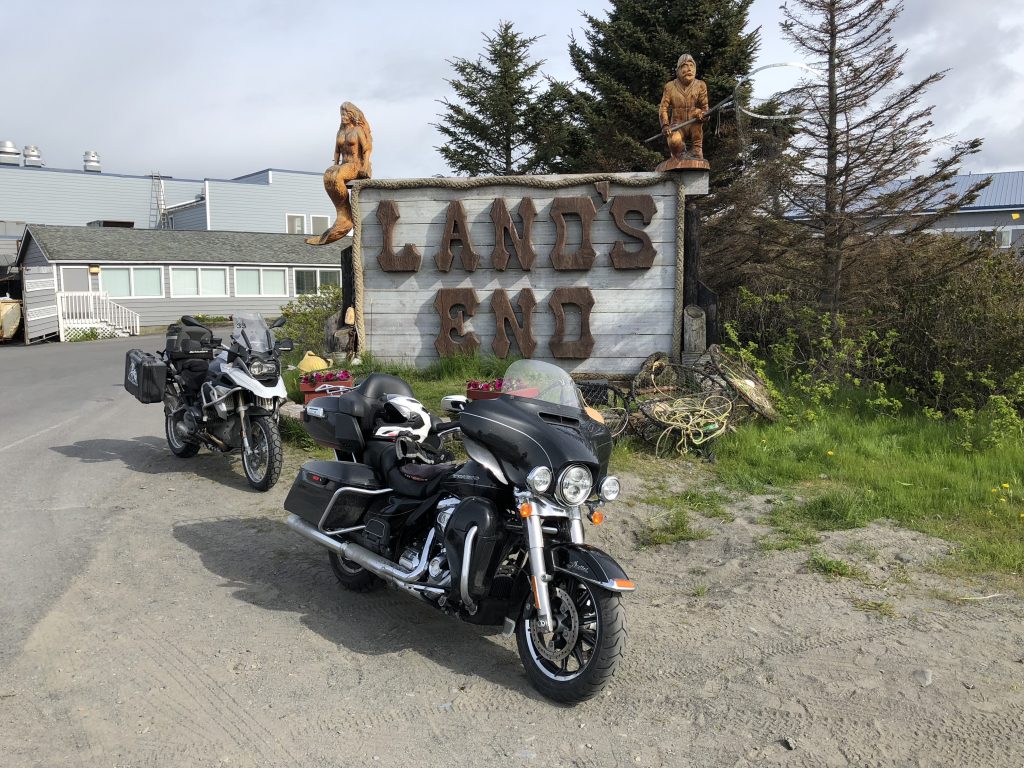 We stopped for some boutique ice cream because we didn’t have any fish that needed freezing. 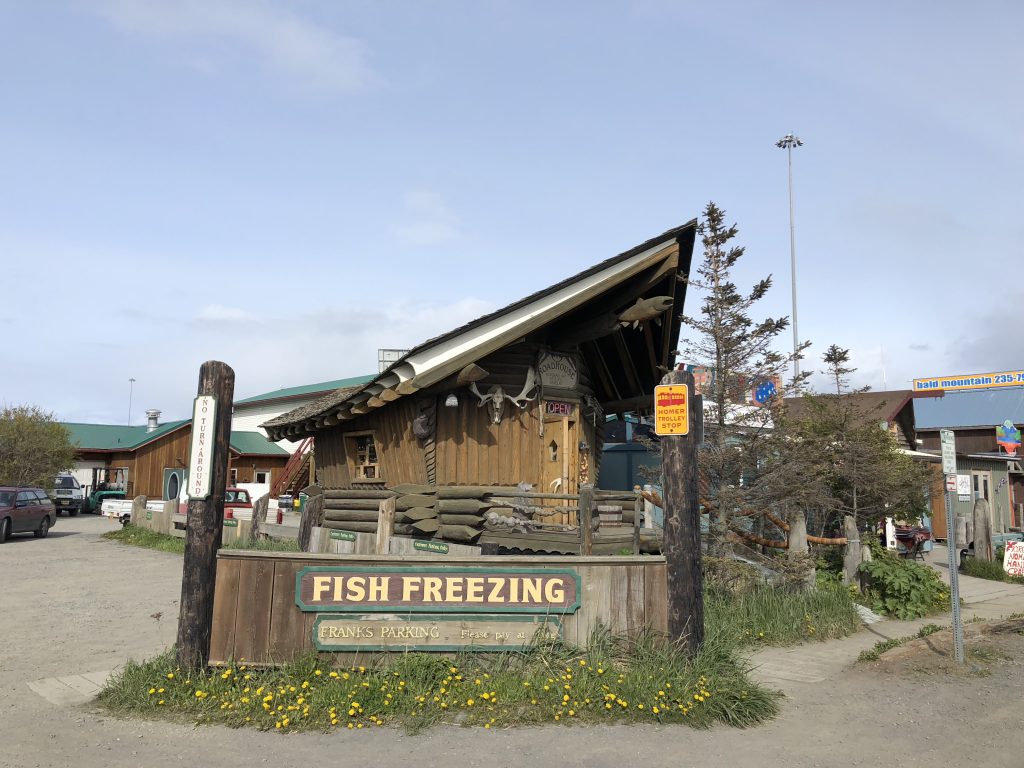 And given the number of boats and fishing boats tied up in the marina this might have been a good business! 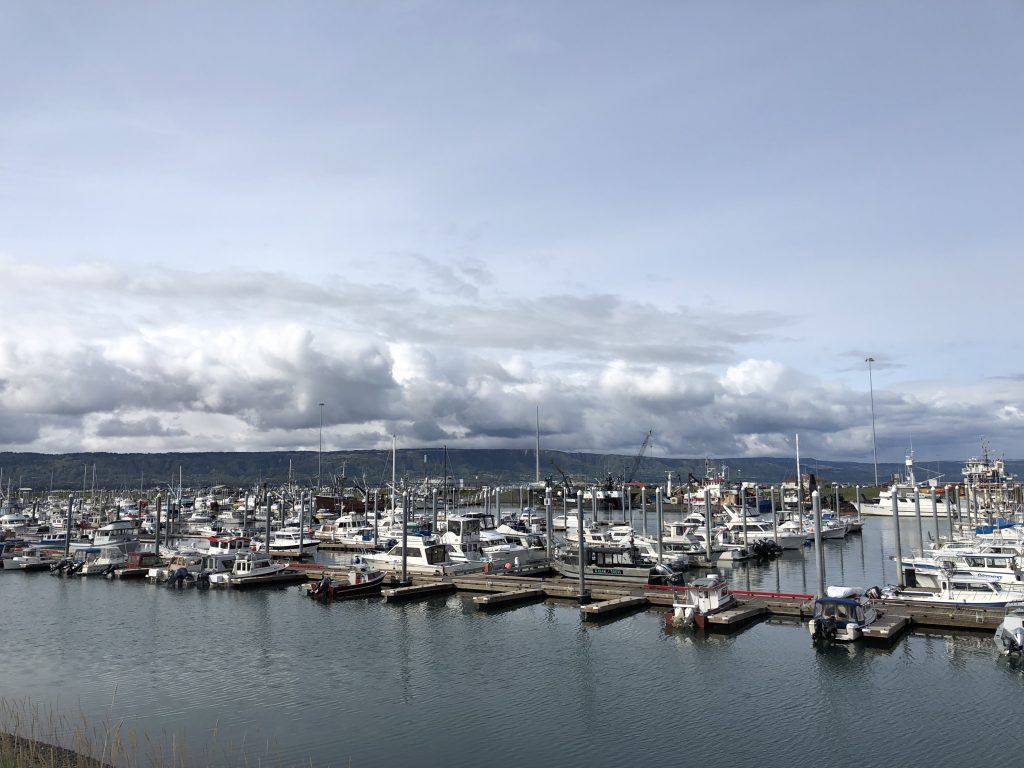 After that we rode into town and took a ride along the tar section of the East End Road. We’d found some twisties, yee haa!  We were on our guards though, there was gravel on a bunch of the corners and the road surface was dodgy in some places.  The Ultra couldn’t keep up with Rob’s GS. I needed to keep enough of the foot pans on it to ride it back to Anchorage.  One thing we did note from this road were the spectacular views over Kachemak Bay to the mountains and glaciers on the other side. Wow!

We had dinner at the Otter Bar then it was time for sleep, for the second “night” while the sun was still up.  Only 229 Miles (366kms) for the day. Rob and I were definitely in tourism mode not riding mode. We were hoping the weather might improve a little tomorrow.

Ride back to Anchorage

The next day we had a big buffet serve for breaky at the Best Western then rode back to Homer Spit to take a few pics of some interesting beached boats we’d seen the previous day. 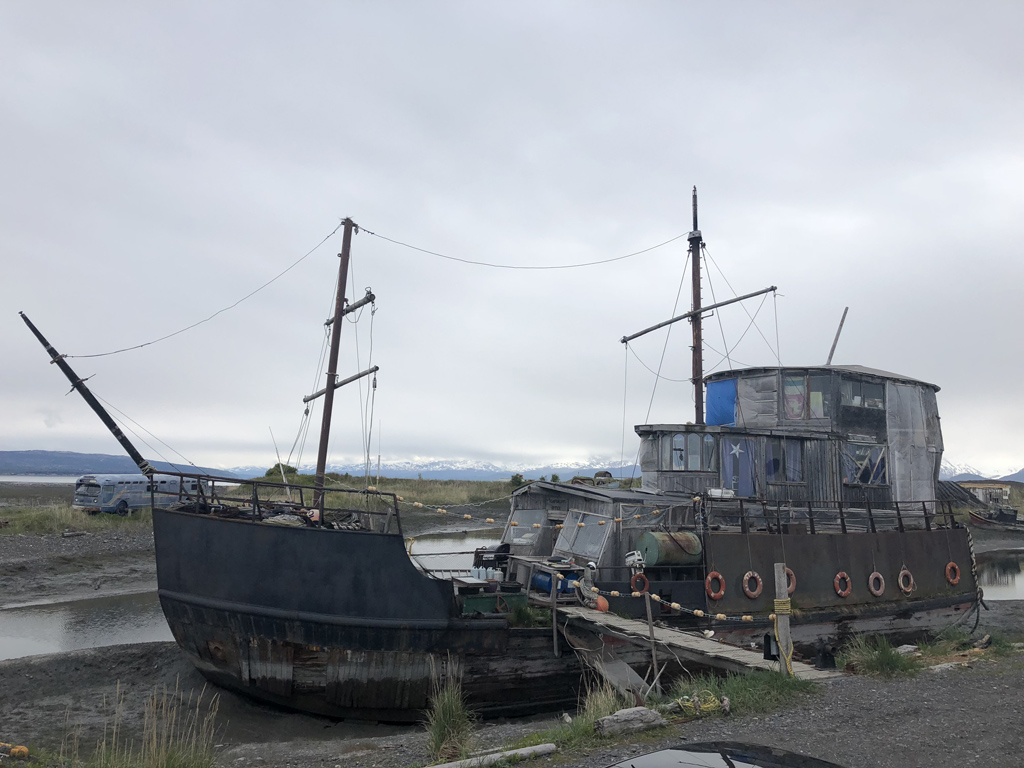 It was a bit cloudy at the time but there seemed to be some sun in the direction were were riding today. 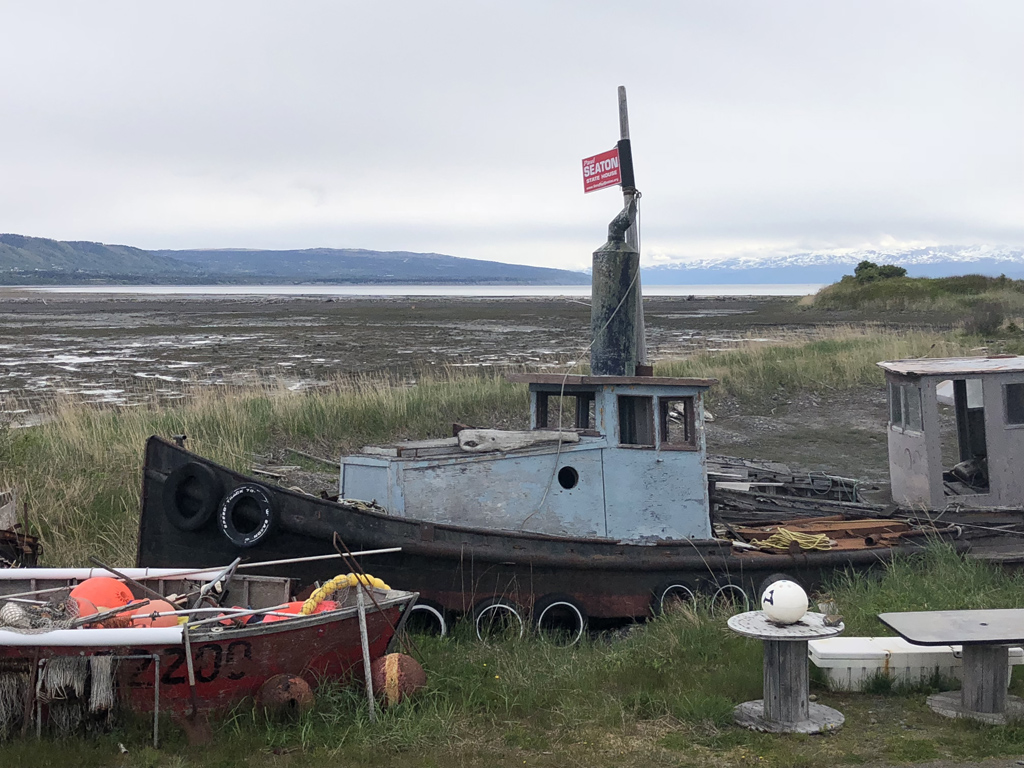 We were keen to get a pic at the Anchor Point sign, its the most westerly highway point in the USA. We had a crack at finding it and ended up getting it wrong, which worked out fine because we ended up riding a loop south on the Old Sterling Highway which was full of nice corners and devoid of traffic. The rain had come back though.

We rode back to Anchor Point we found Anchor Point Road riding as far west as we could.  There was a carpark there, people go there to see boats launched in Cook Inlet being towed over the beach by tractors. Such are the size of the tides in that area. Anchor Point got it’s name because Captain Cook lost an anchor here!

We asked a local where the sign was, he gave us some directions and offered to lead us to it but we’d seen some eagles and other large birds riding in and Rob wanted to take some pics. 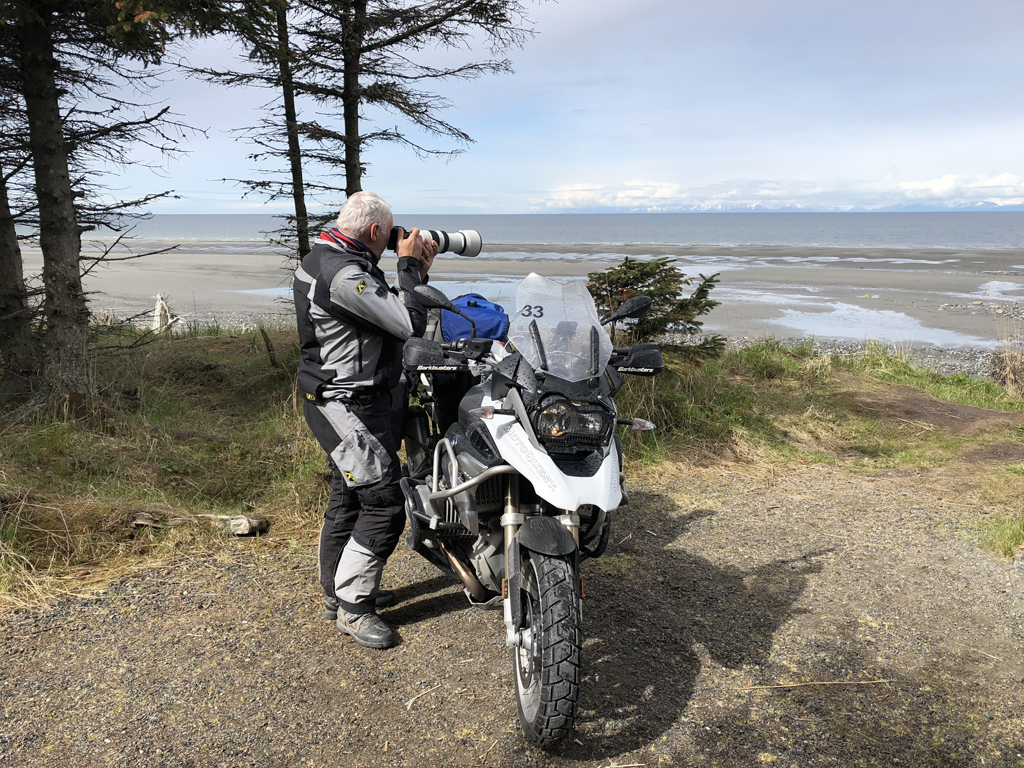 So we moved to a less busy carpark nearby. After a few minutes I looked towards the beach and there was the sign we were looking for, not 20 metres from us! Apparently there might be another sign out on the highway, but we are here right on the coast! 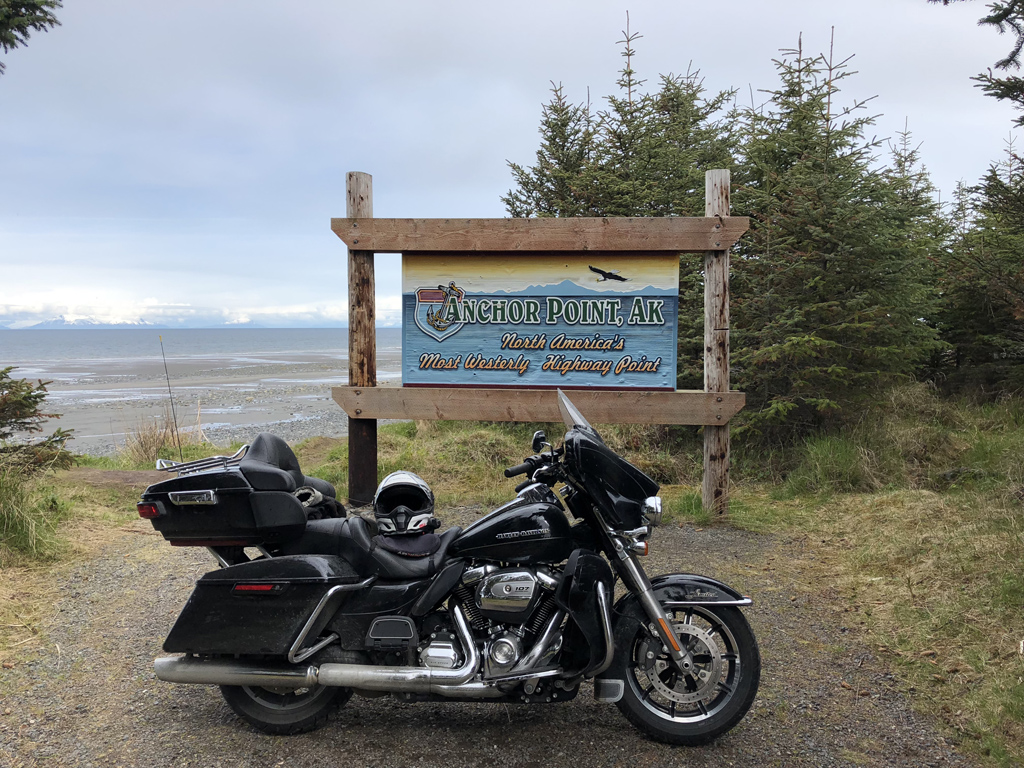 Rob went to some effort to get onto the beach and walk out for a shot of a bald eagle preening itself. 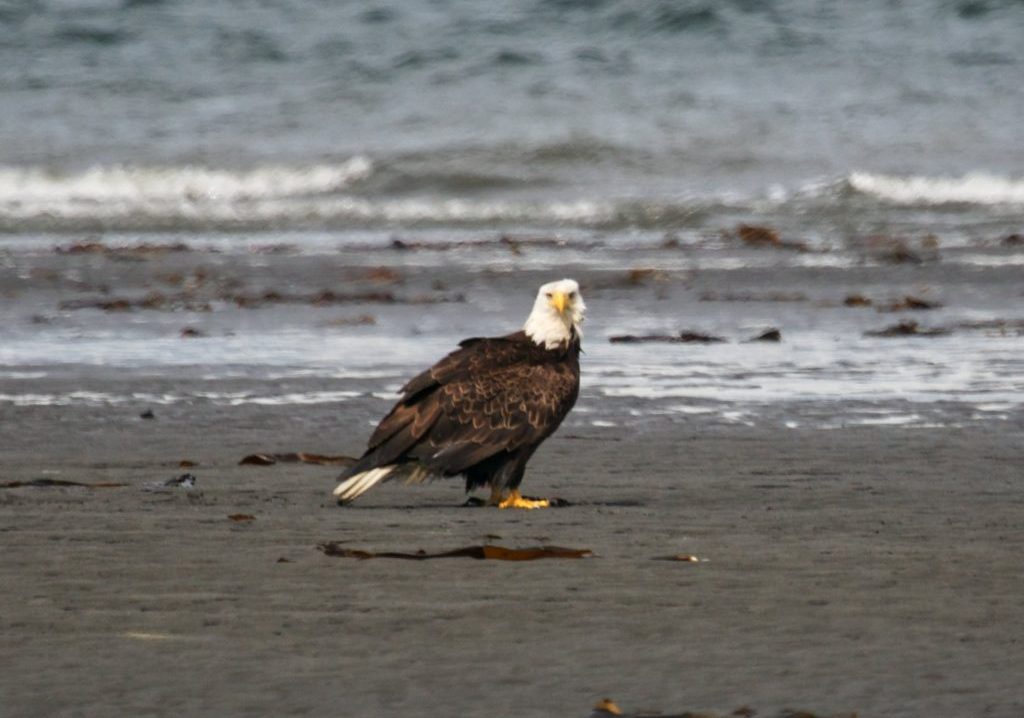 Then it was time to get going. We needed some fuel at Soldotna and rode through part of the town we missed yesterday because of our detour to Kenai and Kalifornsky.  We absolutely couldn’t resist stopping at The Moose is Loose Bakery. 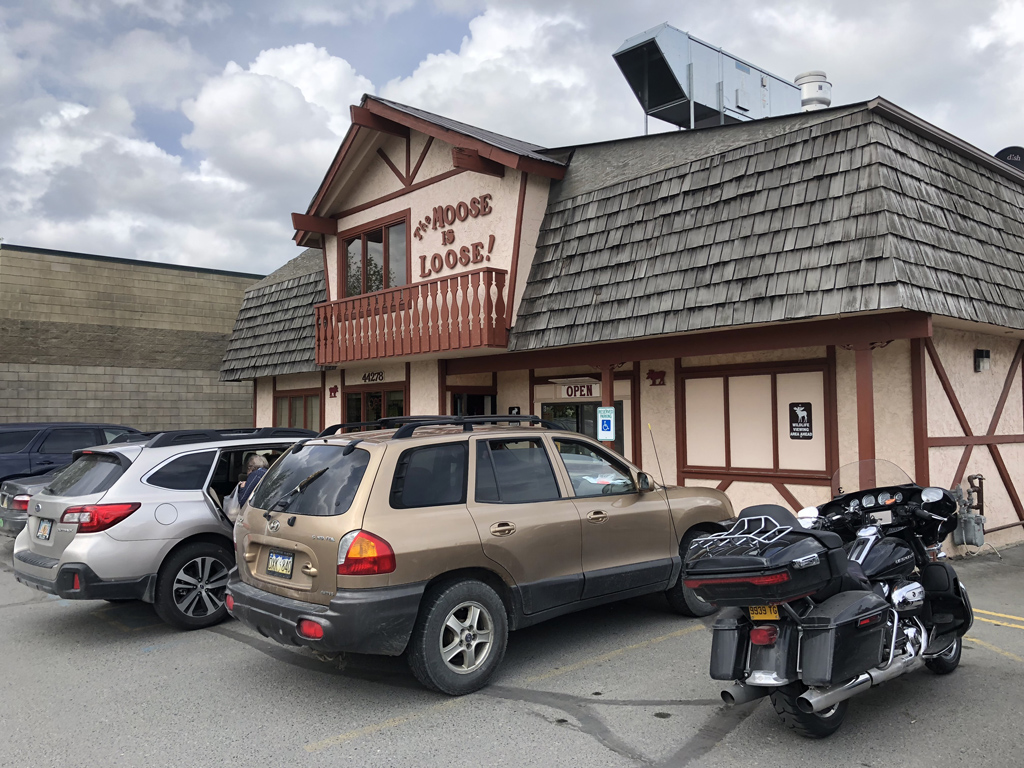 The food there is awesome and the donuts, called moose snacks, were huge! 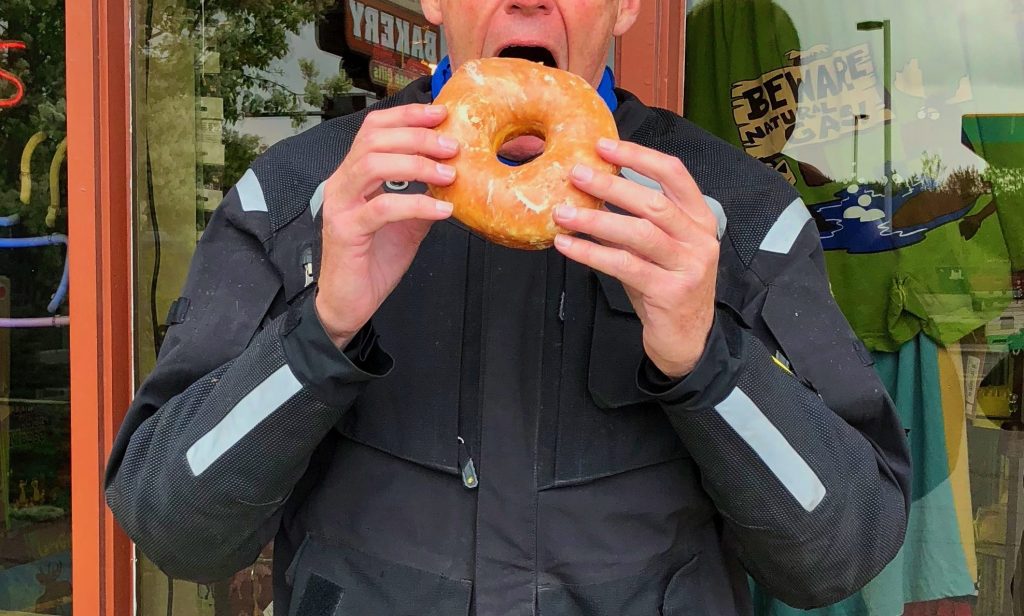 With the sun out now we were really enjoying the scenery and decided to head back towards the Portage Glacier to take some pics of the lake we’d seen a couple of days before. It had turned into a much nicer day.

And play in the ice. 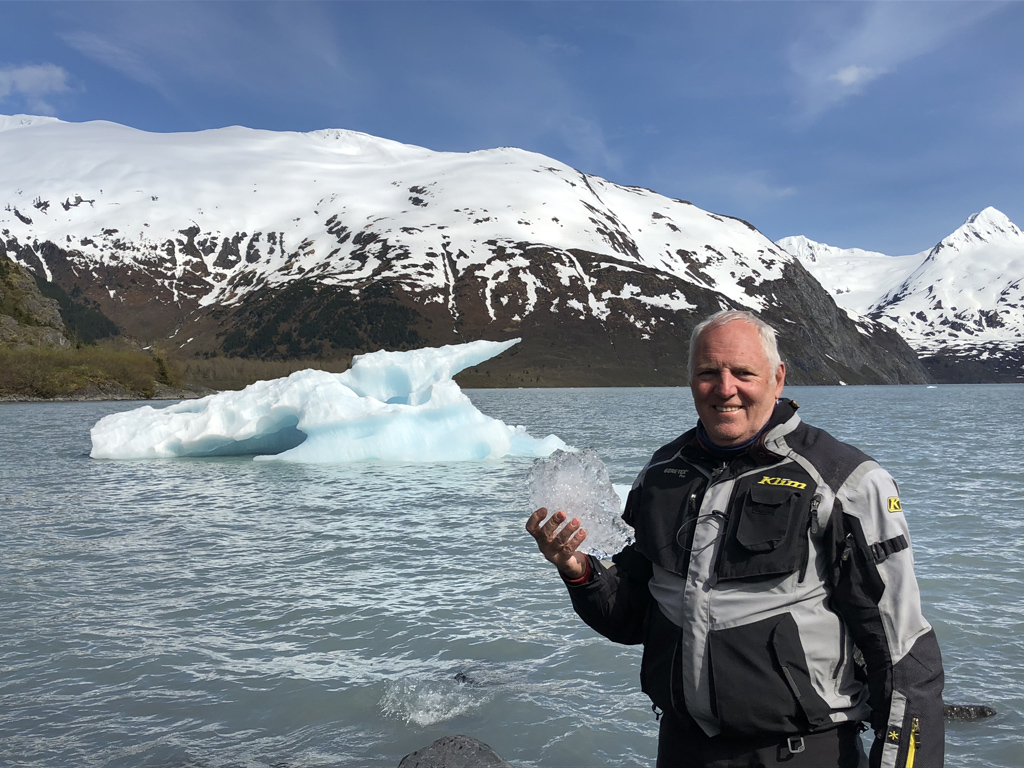 After that a leisurely bimble back to Anchorage where the sun was still well and truly up at 11pm. 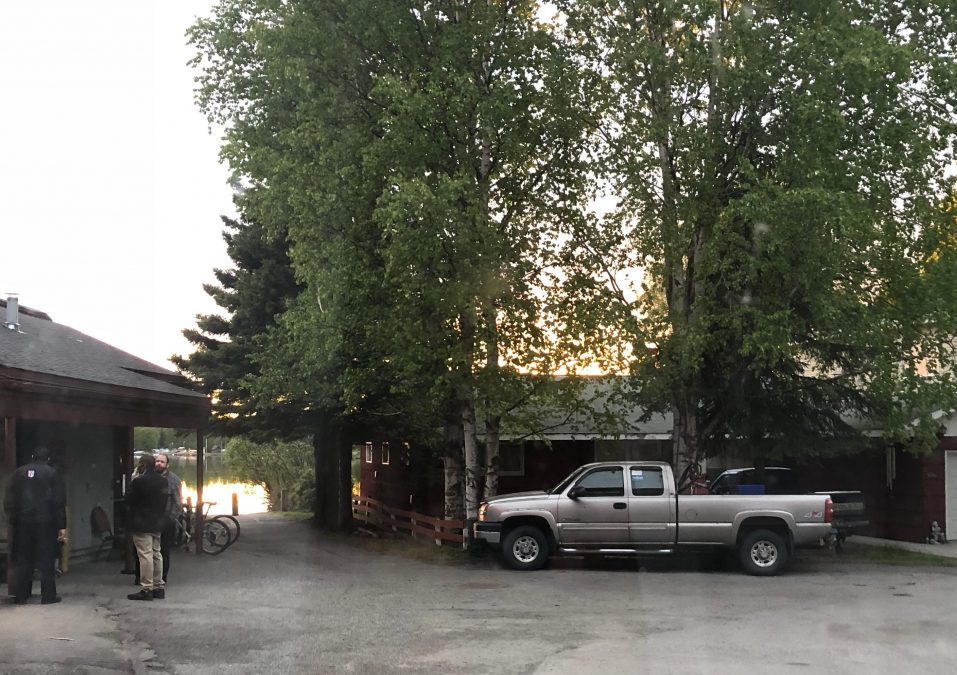