Some days the everything just clicks. The roads, the scenery, the bike and your head coming together as one. Today was one of those days for me.

After a good night’s sleep at the Tangle River Inn a hearty breakfast was followed by the ride brief. 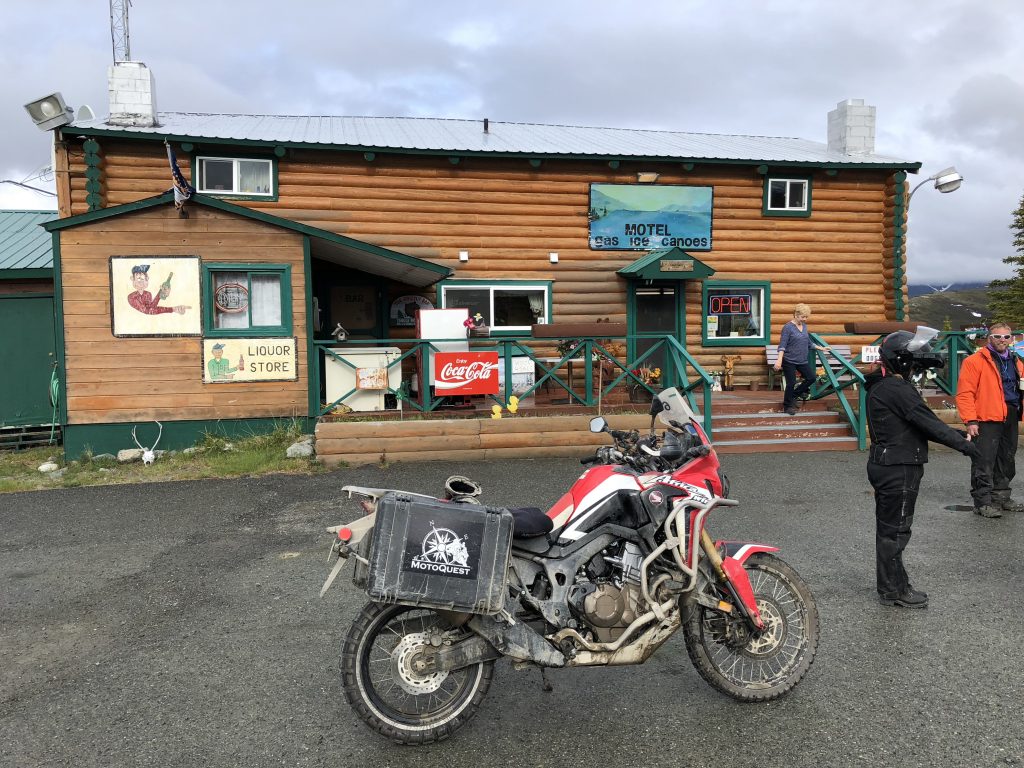 It was cooler this morning and the wind had whipped up a bit. It had rained overnight and there were still showers about. Tangle lake across the road had changed from being covered in ice yesterday to this! 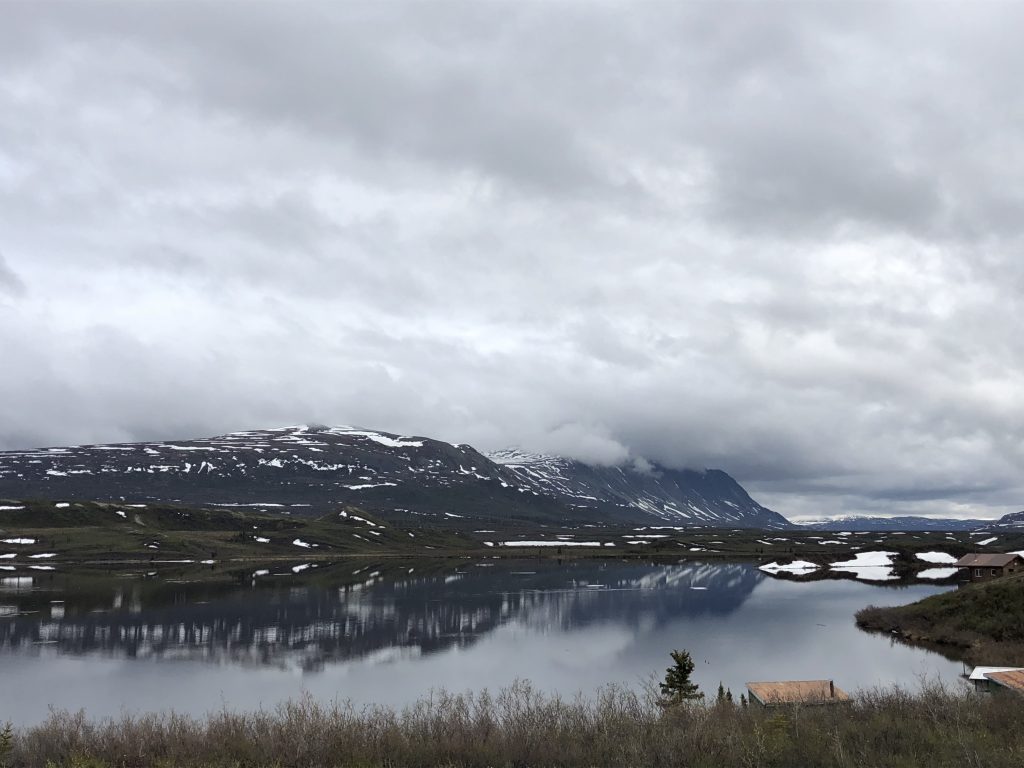 We were about the hit the dirt on the Denali Highway and after talking through the stops Dan the guide told Rob and I we were free to head out when we were ready and they’d catch up later.

Rob was in the lead and a little while in he pulled over and said that he just felt like mosying along. I wasn’t in the mood to pin it but, despite the front fork issues, the Africa Twin was in it’s element. So off I went. This mountain plain road was amazing. The snow by the road told me we were up pretty high. 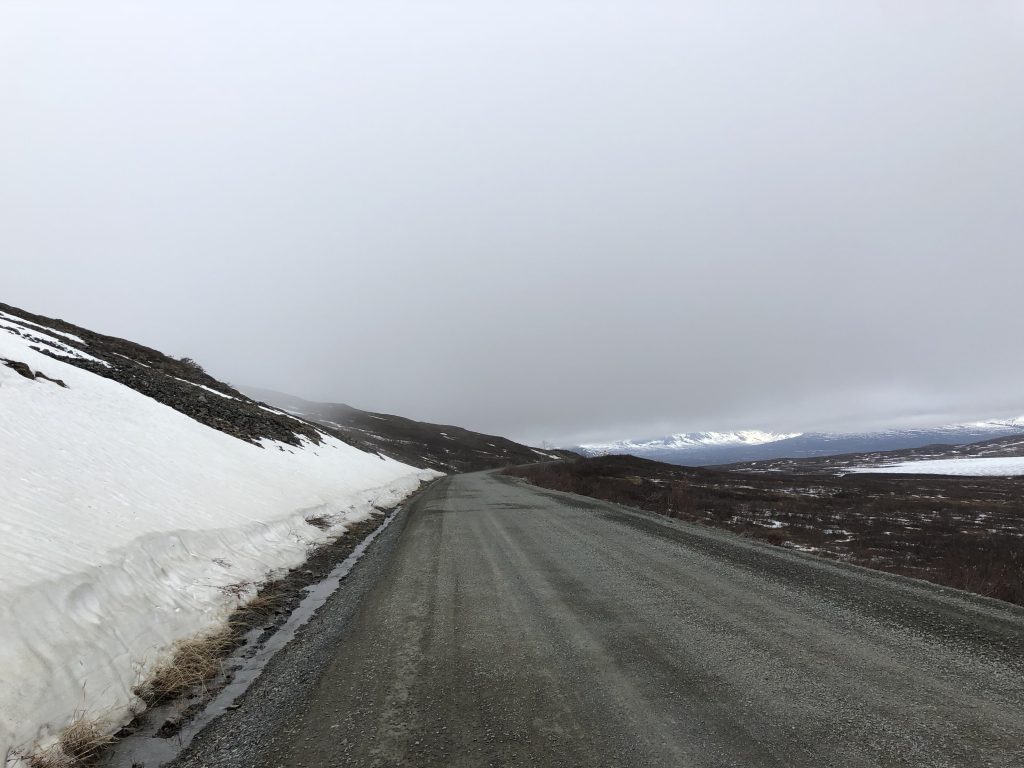 The views were spectacular as the road wound it’s way up ridges and down valleys.

Winter had taken it’s toll on the surface and in some places they’d started getting it ready for the summer traffic. In some places it was more technical than the Dalton Highway but after 6 straight days and a bunch of miles on the Africa Twin none of that mattered. There was some muddy sections and some rocky sections but I was in a sweet spot, comfortable and having a ball. 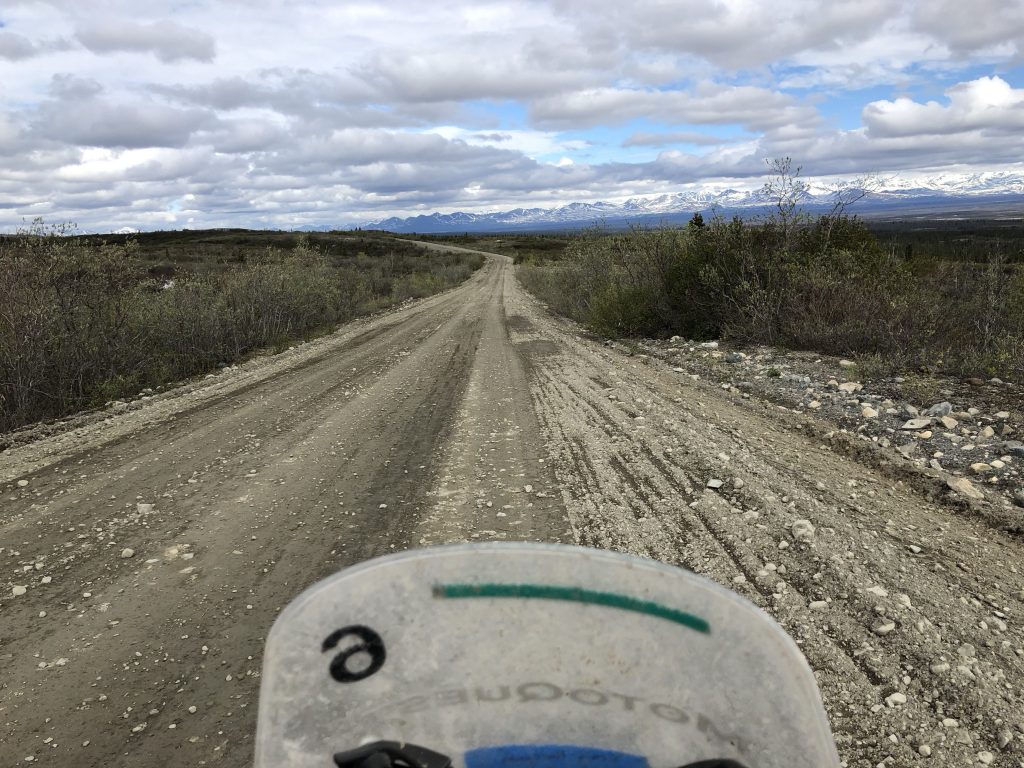 I was stopping to take photos from time to time. I even stopped to have a chat to a mad cyclist who was riding a mountain bike the other way on the Denali who was changing a flat tyre. 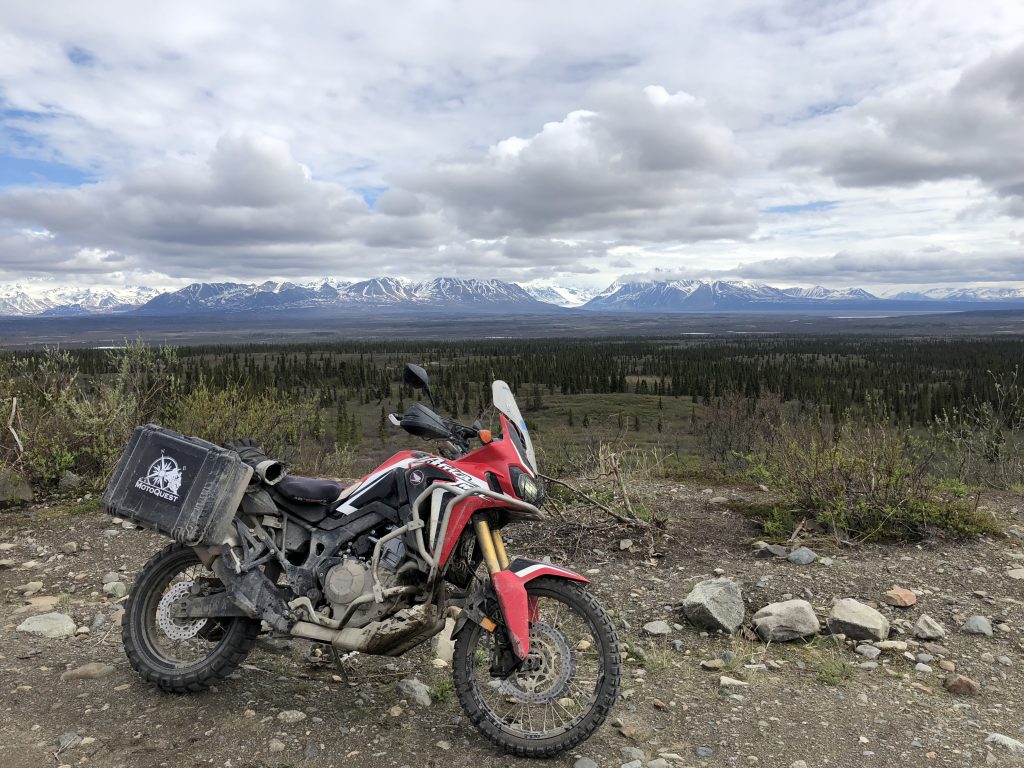 After a while I saw another bike back in the distance. I recognised it as Pete, a retired judge from Florida who was riding a Wee-Strom and frankly rode it very well! It was good to have company for a while but I noticed he wasn’t catching me so I stopped looking back and got back into the comfy zone on the AT.

I saw a beautiful little river, the Brushkana,  and after crossing the bridge saw a track down to the water and took it. 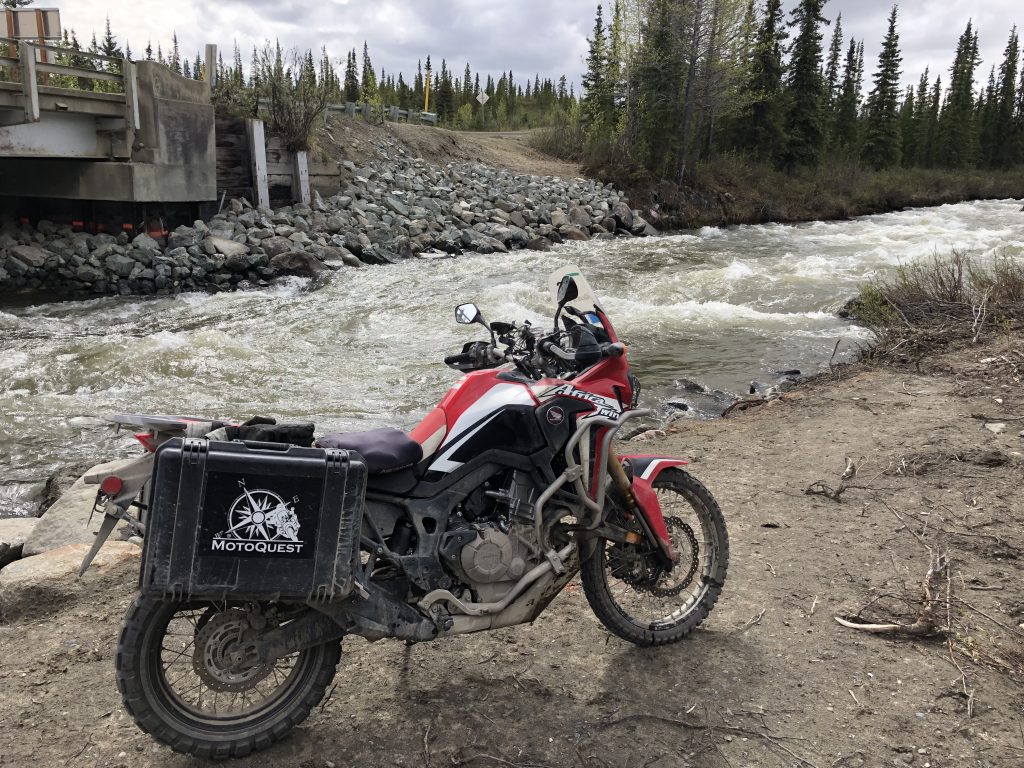 While I was taking some pics Pete arrived and we had a chat for a while. I took a couple of water pics using the iPhone’s live mode. Always a good result 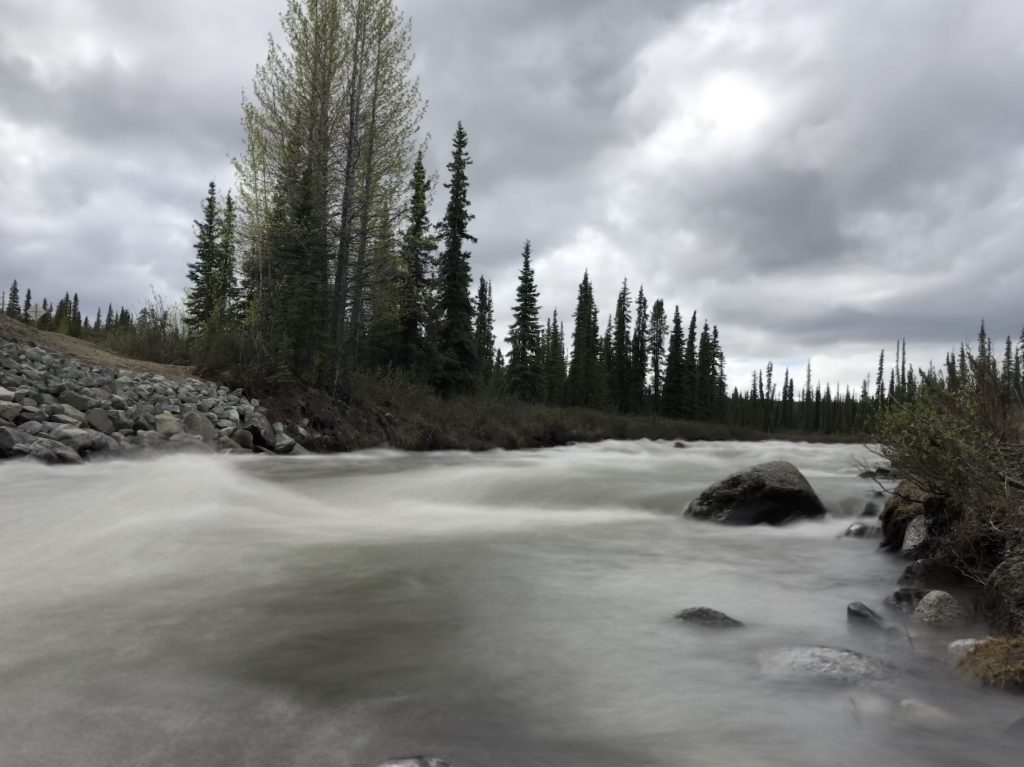 While we were there another rider on a GS1200 rode past still well clear of the others it seemed. I fired the AT up and got back in the zone rounding up the GS soon after and passing him going up a bit of a snotty hill.

While the forkoil-less front of the AT was a little like a pogo stick it didn’t dampen my enthusiasm as the road continued to wind it’s way up and down hills and valleys with the mountain backdrop.  All too soon the dirt was over and I waited for Pete and the GS to arrive at the intersection with the Parks Highway at Cantwell. While the rest of the day’s ride was still going to be fun, the stretch of dirt we’d just completed was seriously the most fun I’ve ever had off road. And that’s a big call for me to make!

We refuelled at Cantwell and debriefed the morning’s ride while we waited for the rest of the group and Rob to arrive. Everyone else refuelled nearby and took a break. Rob had also enjoyed the Denali kicking back, relaxing and soaking the remoteness in.

We’d stopped at Cantwell on the way up to Prudhoe Bay a few days before but it wasn’t quite time to head back south yet. First was time for lunch at the McKinley Creekside Cafe. That’s Pete in the photo, great guy! 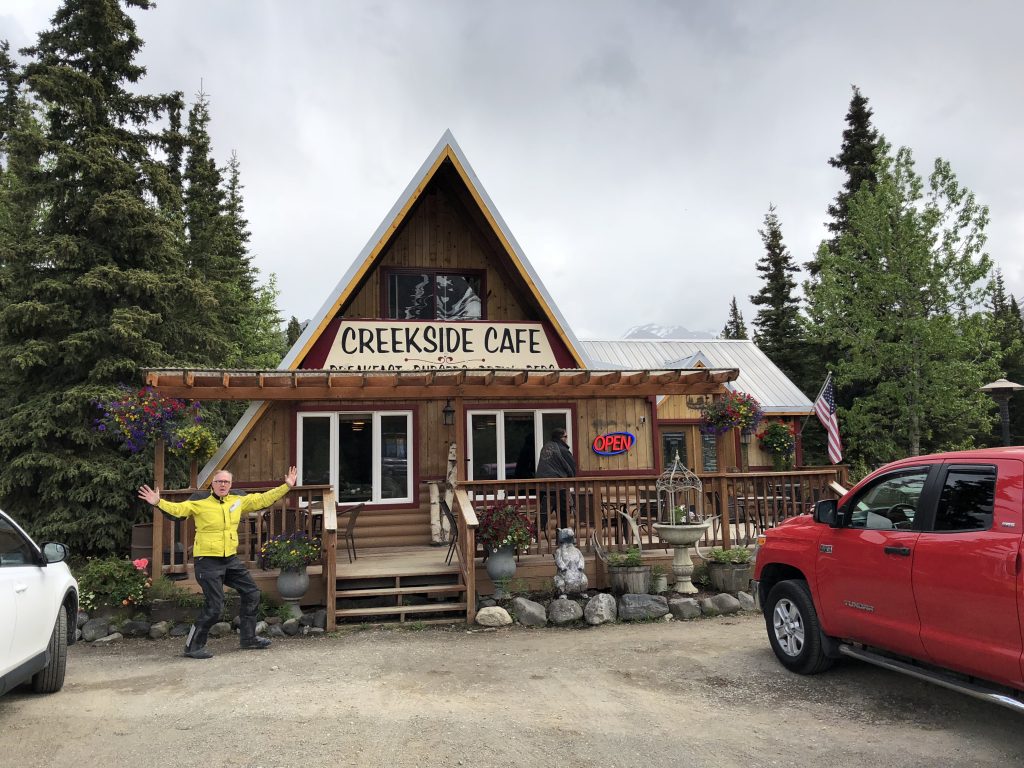 Then it we went a little further north to the Denali National Park.  Rob and I had stopped at the Denali sign on the way up.  After some of the others had taken their pics I asked one of the other riders if they’d take a shot of me and my bike. Of course he said yes so I walked over to the sign without the bike and posed. He looked at the phone screen and became very puzzled for a moment as he held the phone up and looked at it, at me, and the phone again. The bike showed on screen but wasn’t with me. He was just looking at a photo on screen.

The scenery in the Park was amazing. The tar section would also have been great riding fun if not for the enforced slow speed limits and buses everywhere. 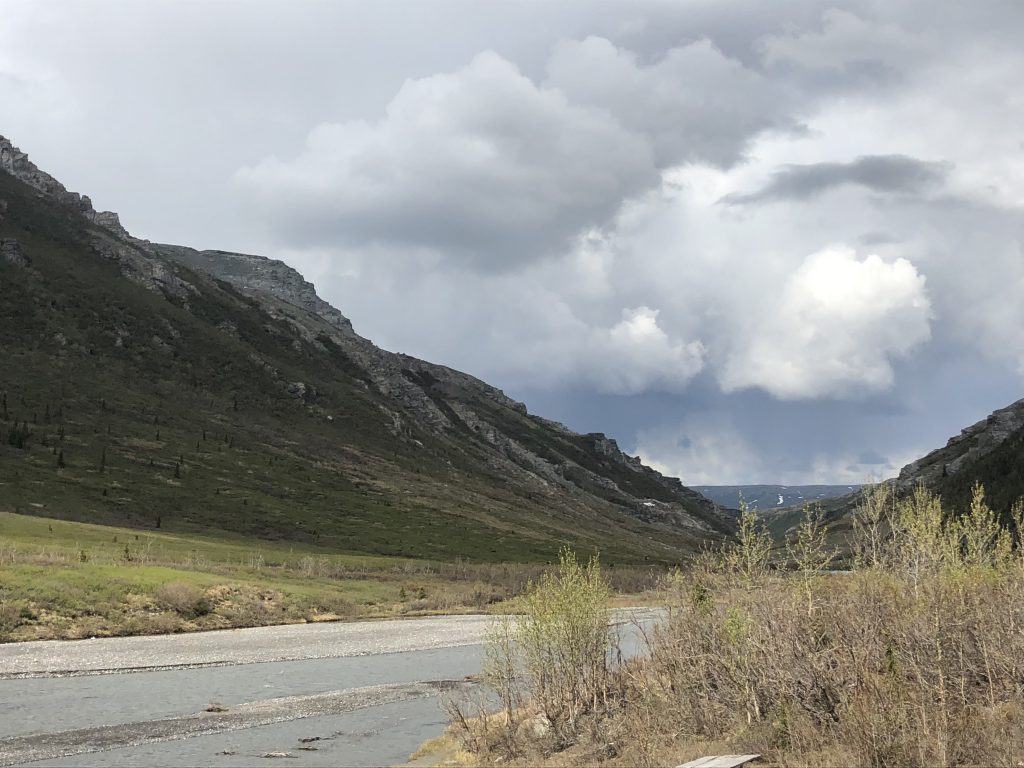 At the end of the tar, and the unpaid public access,  there’s a river and a gate you need to be on an organised tour to get through I understand. 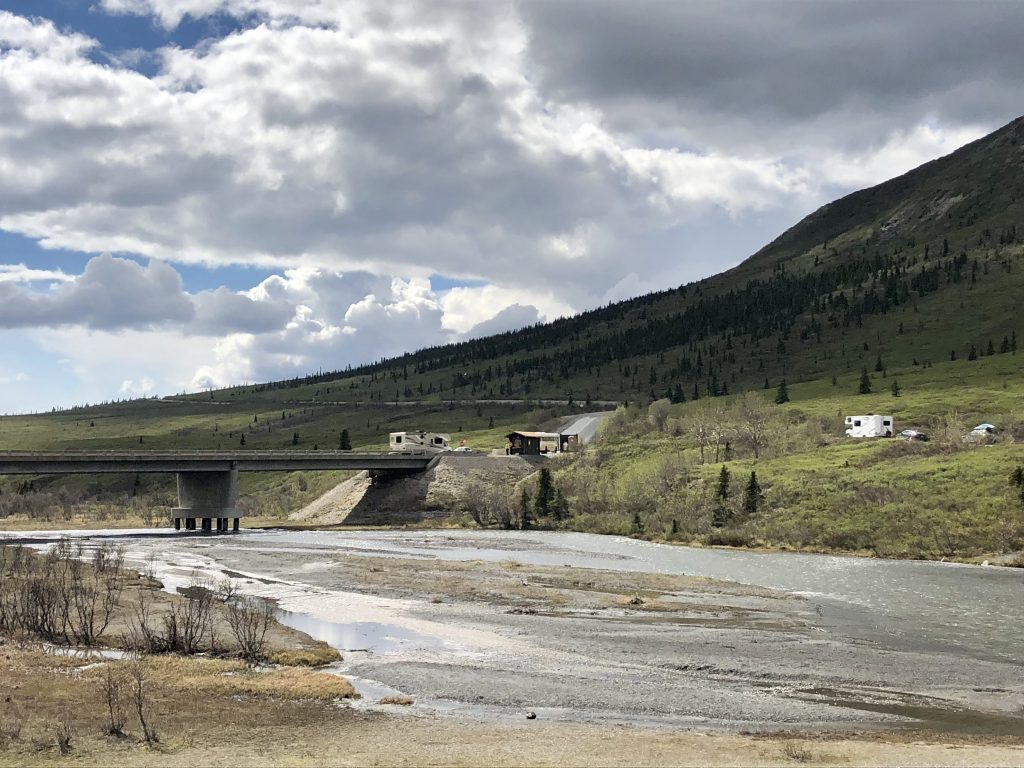 And on the way out we were lucky to get up close to a fair dinkum Moose on the loose. 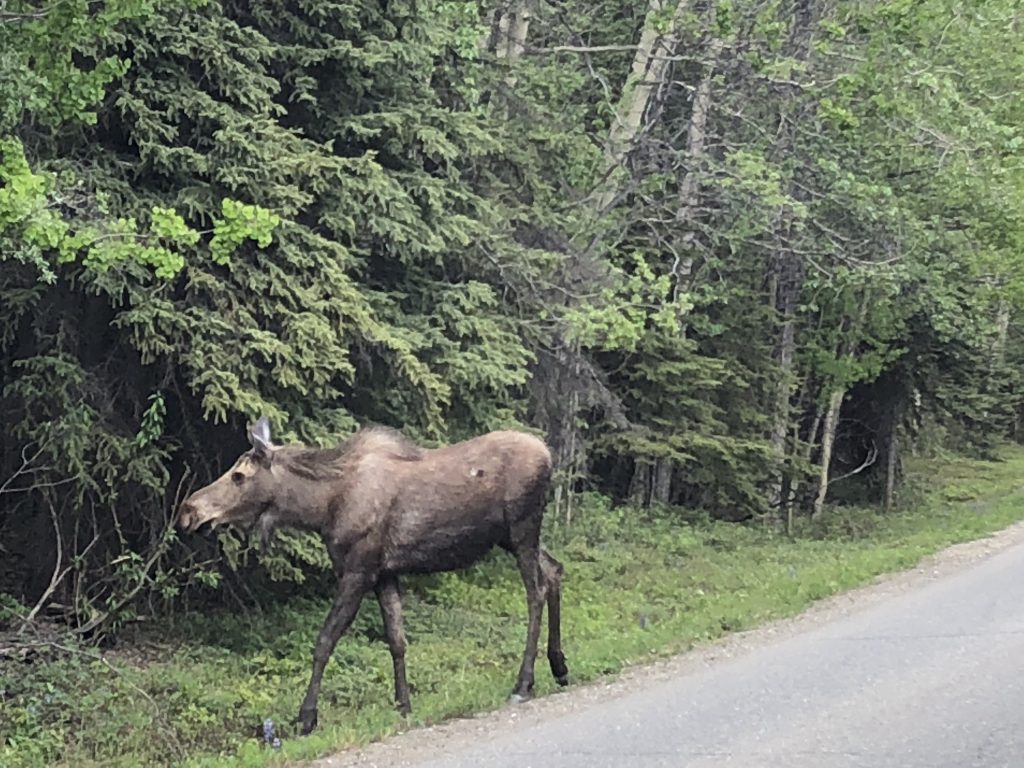 Once back outside the Park it was back down the highway and a left turn to Talkeetna. Talkeetna is a “frontier” style town that caters for busloads of tourists predominantly from cruise ships. So most of the shops were galleries, cafes, bars and souvenirs. 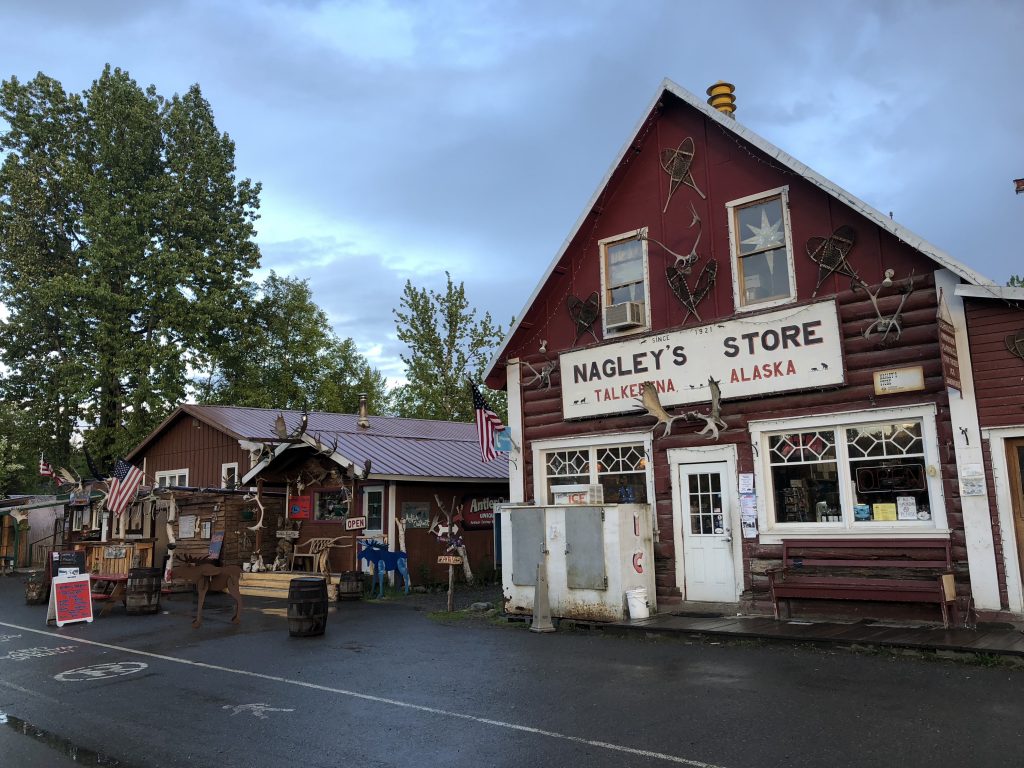 The rain had come back a bit on the way in. 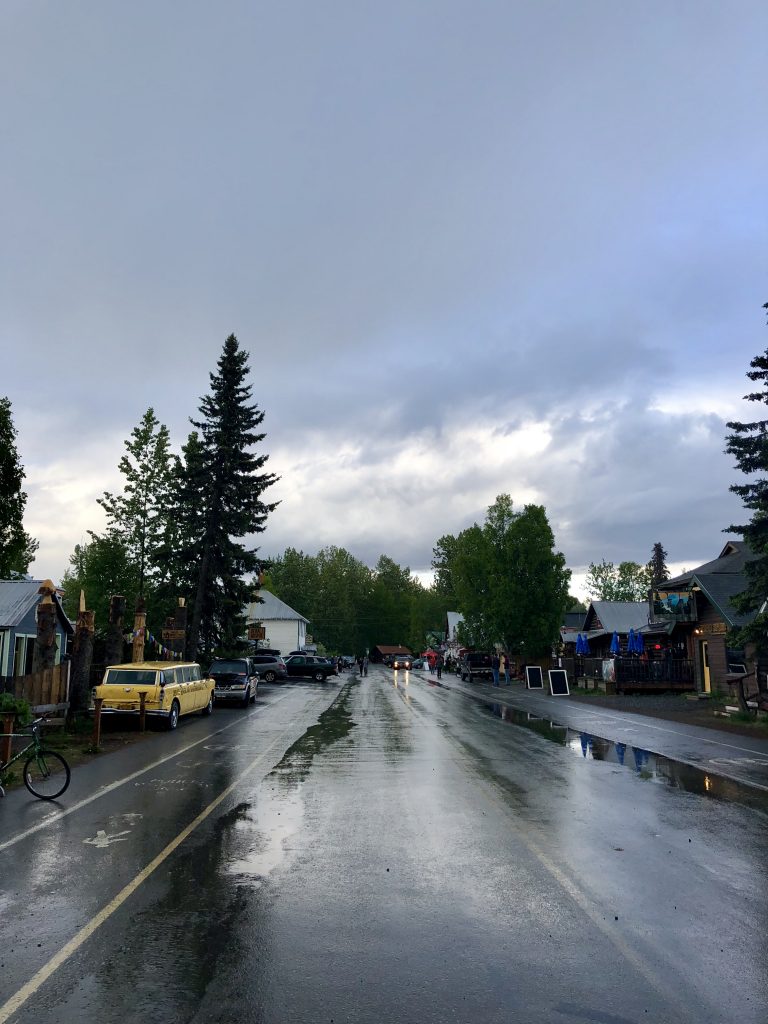 So while a bit fake Talkeetna had a great party atmosphere and a local brewery (brewpub) with great food and party cider. 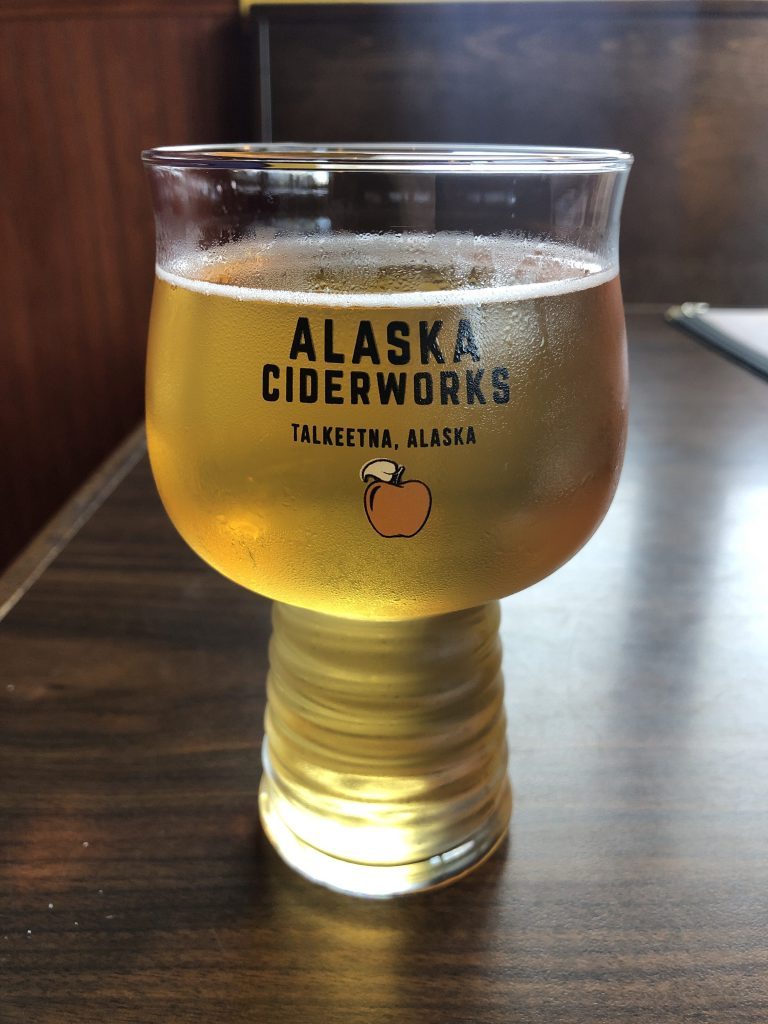 It was a bit of a lateish night, although it still didn’t get dark.  We wandered back over the rail lines to our motel, the Swiss Alaska Lodge, which was a bit dodgy by the way. Tomorrow we’d be heading back to Anchorage and the end of the tour.