I’d read a positive review about the tractionators and heard some negatives so thought I might make up my own mind up. As background I usually run Heidenau K60’s on the rear of my adventure bikes and either a K60 or Kenda Big Block on the front and I’ve also just used a set of Continental TKC80’s on the Africa Twin.  I pay for all my tyres so I’m not biased towards freebies.

Before they were fitted I noted how heavy and solid the rear tyre was.  The tread depth was very noticeable (15mm) with great big blocks of rubber arranged in a pattern not familiar.  The front had less depth of tread and looked somewhat similar to the tread pattern on the Heidenau K60.  Here’s a picture of them post ride (4,700kms). 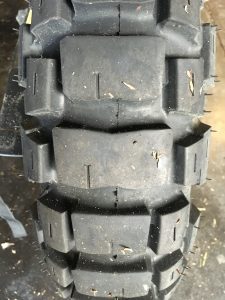 While observing the fitting of them it was noted they were hard work to get on, not necessarily as easy as I’ve read elsewhere.  I had them fitted with Motoz Uber heavy duty tubes so beading them wasn’t an issue.  I have heard from a reliable source  that on occasions getting a bead to seal on a tubeless fitting can be a problem.

So how did they go?

Day 1 was a slab day, 1350k’s from Newcastle NSW to Renmark.  They were a little noisy but no more noticeable then other “non road” tyres I’ve used.  Both tyres showed little sign of wear on that day. I had been told that a rider noticed some “feathering” of the rubber on top of the knobs after a few hundred k’s. I saw this at my second fuel stop at 600k’s but it didn’t seem to effect the overall wear. Perhaps it was some softer rubber on the outside of the knobs reacting to a heavy throttle input. It was a dry day without too much opportunity to test the tyres on fun cornering but given my recent experience with TKC80’s I was happy with the lack of wear on the slab.

Day 2 took me through South Australia’s winding hills and on to Hawker.  Braking and cornering on the Tractionators was solid and predictable with no moments of concern.  Then I rode on various conditions including open clay/gravel roads with packed and loose surfaces and through gorges and stoney creek beds with water running through them along with the occasional wet/slippery climb from a creek.  In the dry stuff the traction was fantastic.  You could spin the rear up on the wet stuff (traction control off of course) and have a bit of fun and the tyres behaved extremely well.  Hard braking on loose surfaces wasn’t a problem. With another 650k’s or so including 150 on gravel/trails there were still no concerning signs of wear.

Day 3 From Hawker to Arkaroola on open gravel roads at “around” the state speed limit followed by an afternoon riding twin trail with steep rocky climbs, big rocky creek beds, some loose stuff and gibbers (sharp nasty ones) and frankly I didn’t find the tyres wanting at any point.  If anything there was more traction than I was used to from the K60’s and not much different to my impressions of the TKC80’s on this bike.  I also got a big piece of bone jammed right into the base of one of the knobs on the rear.  It penetrated sort of sideways about 1cm in but didn’t go through the tyre or into the tube.  I removed it with a pair of pliers and I can’t now identify the knob it went into. So it held together nicely with continued use.

The next three days were a mix of Oodnadatta Trak, Borefield Rd to Roxby Downs and long highway tar sections to make up just over 4,700kms travelled.  I got the opportunity to properly test out the dry weather corning on Horrocks Pass SA and rode the Africa Twin as hard as I’ve ridden on any other tyres without any concerns whatsoever.  I was expecting it to let go a bit but that just didn’t happen and they did hold on a little better than the K60’s.

The final day saw me ride through 500kms of pissing down rain from Cobar through to Gilgandra then over the Great Dividing Range to Merriwa and back to Newcastle. A fair sample of road conditions with water flooding across the road in places, wet/muddy gravel roadwork sections and some nice tight corners over the mountains.   Frankly I just rode at the speed limit, appropriately for the conditions and didn’t need to think about the tyres too much at all despite the horrendous weather.

Occasionally when overtaking the back tyre would slip/spin under hard acceleration and the traction control would kick in if it was turned on.  I didn’t see a point in trying to drop the knee and push like a maniac around corners so I can say that they were at least as good as the Heidenaus in the wet and possible better.  I recognise that some don’t think the Heidenaus are much good in the wet, or in the dry for that matter. I guess it comes down to how hard you want to ride on a wet surface and your level of skill or risk tolerance.  I freely admit to being relatively conservative.

So overall the majority of this trip was on highway’s and I expected that the tyre wear would be significant because of that.  The rear is about half gone, the wear on the front is barely noticeable.  That means the rear doesn’t have the longevity of the Heidenau (I’ve got 15000 ks from them) and the one on my Tenere has done a similar trip 1.5 times and is about half gone.  However my gut tells me the Tractionator Adventure rear was better than the K60 in the dirt and gnarlier stuff.  The fronts were much of a muchness but I didn’t get to try the front “adventure”.

To me that means if you are sticking to the off-road and traction rules over longevity then the Motoz Tractionator is a great option. I had in mind to use K60’s on the Africa Twin for general use, I think I’ll stick with the Tractionator.  The Super Tenere will still be wearing K60’s though for more long distance Adventure Riding.

I will update this with more info as I wear them out but I’m pretty happy so far.