I’ve always wanted a proper sportsbike but could never find one that suited me. So other than my little CBR125R and the CBR250R I bought to do some challenging Iron Butt stuff I never really thought I’d own anything that resembled one. Being 6’5″ (195cm) usually means I just don’t fit, and I’ve tried all manner of them.

Quite by chance a while back I was at the local Kawasaki dealer buying a pair of riding pants for my daughter and, as you do, I looked at the bikes. Before knowing what it was, the metallic green Kawasaki H2 SX SE with panniers jumped out of the masses and took my eye. I asked Kevin what it was and sat on it. My knee just squeaked under the contours in the tank and I could get my toes under and over the gear shifter! I told him I’d come back and take it for a test ride, without really being committed to doing so.

OK, it’s marketed as a (Hyper)Sports Tourer with some differences to the true sporty H2, H2 Carbon and the H2R track bike but with all the gadgets and it’s supercharged 197HP motor that she  sportsbike like enough for a big bloke like me! My last sports tourer was a Honda ST1300, it’s fair to say it’s not really like that either.

A couple of weeks later I saw an H2 SX SE at Jerry’s cafe at Kulnura. Its up there next to my yellow Super Ten. 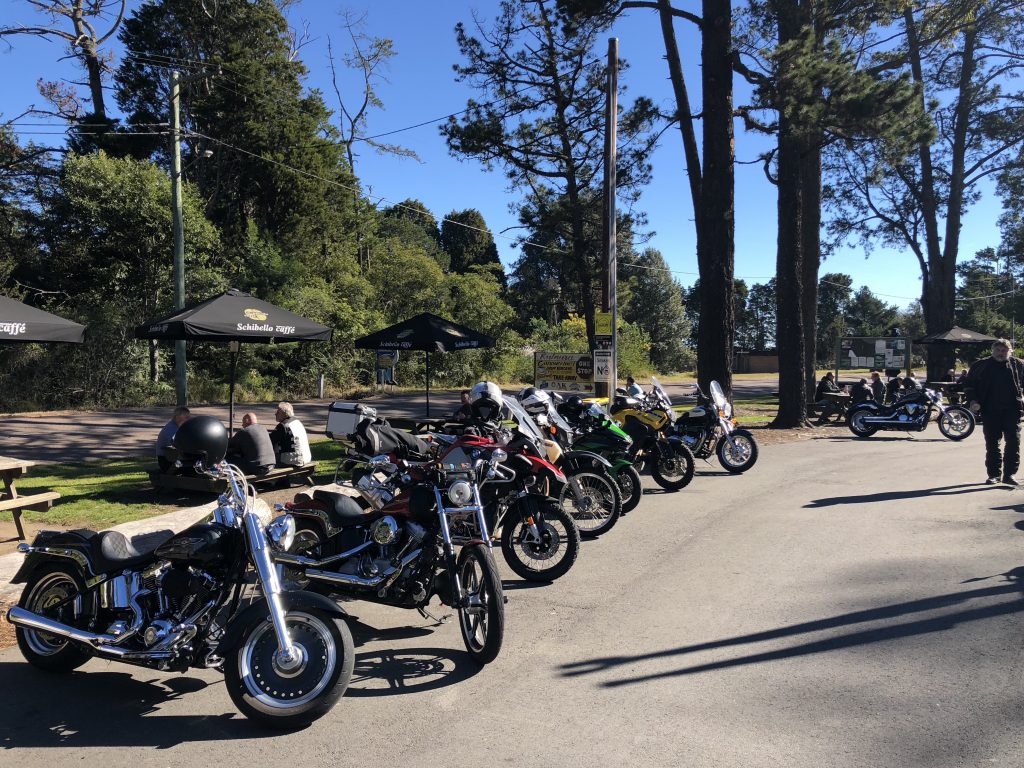 Reminded of the one available to test, and given I already had my riding gear on, I left there and went back to the dealership just to try it on for size. The smile on my face when I got it back from the test ride was obvious. I took this on the test ride.

The problem was I didn’t have in mind to buy another bike right now and if I was to spend up my expectation was I’d be getting a new Harley Road Glide.  So I rode the Road Glide and loved it.  I also rode a 1200RT, a BMW K1600 B bagger and a couple of other things I’d been mildly interested in trying. Then I let the process stew for a while while I considered if investing in a fourth motorcycle was sensible.  Of course it wasn’t so I dispensed with that hypothetical quick smart.

The second test ride on the Kawasaki H2 SX SE  almost convinced me, the smile factor again obvious. I took a Road Glide out immediately after and while the decision was line ball the deposit was paid on the H2 that afternoon. And they had a new one in stock. Sold! 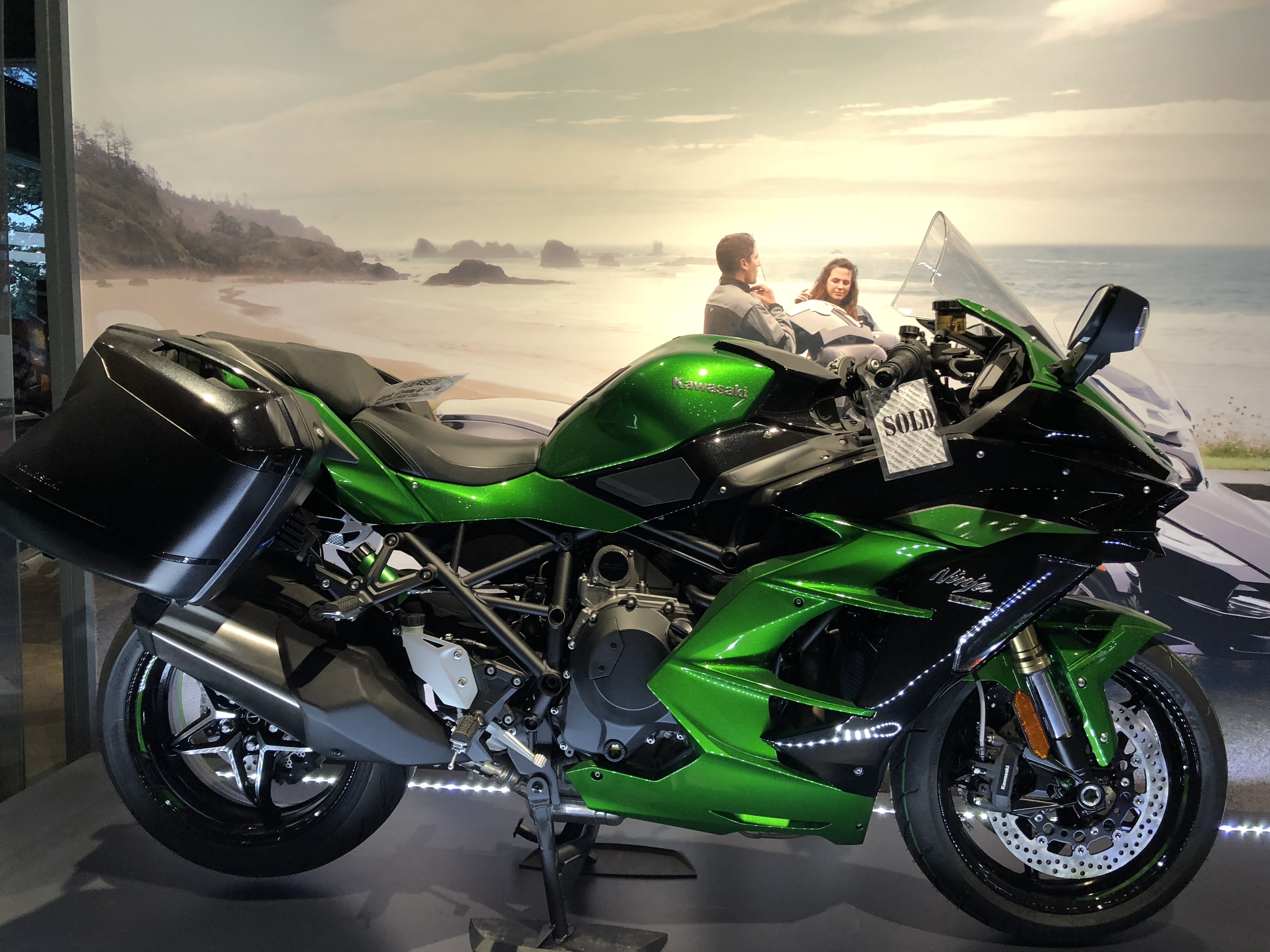 Less than a week later I had it home. 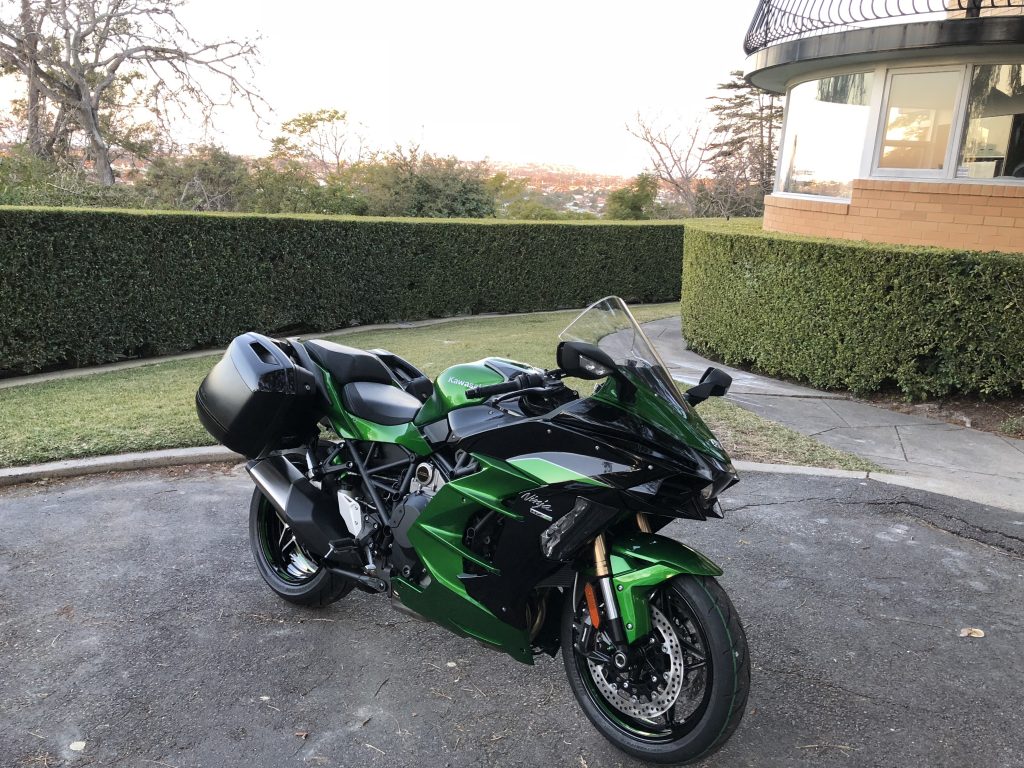 I read the manual, well not really, just the bits that described the run in procedure. 800k’s at sub 4000rpm then another 800k’s at sub 6000rpm with a service at 1000k’s. Don’t leave it for long periods at a constant rpm. That should be easy enough.

The first ride out I was grateful for the quick shifter.  Without trying you get to 4000rpm so fast in each gear it’s actually hard to coordinate the manual short shifting required to keep the revs down. Even riding like that you simply leave most things in your wake at traffic lights etc. The supercharger makes a great sound as it winds up and you get the feeling that this bike is a pure beast.  The most powerful bike I’ve had before is a KTM 1290 Super Adventure which compared to the H2, well it’d be unfair to compare the KTM although it still is a weapon in it’s own right.

Most of the first 1000 k’s was done on relatively shitty winding roads between Newcastle, Mulbring, Sandy Creek, Wollombi and Kulnura. 4000 rpm in 6th is unfortunately under 100kph so I avoided the freeways in the early rides. Once up to 6000rpm I took the cruise control for a run on the freeway, it’s excellent. The cruise holds its speed and is easy to use. No probs freeway cruising and banging out k’s on this bike. Back to the first ride…

It can get cold at Wollombi in winter and at zero degrees C out there I quickly lamented the fact that Kawasaki didn’t include heated grips on their most expensive sports tourer. Fer fugs sake, I’d rather have those than launch control! Since that ride I’ve had the factory heated grips fitted and what a nightmare! First up they are $400+ for the grips. Then the fairing and most of the front of the bike has to be dismantled just to plug them into the harness behind the freaking speedo! I was lucky the dealer hadn’t done a set before and I was quoted an hours labour to have them installed. If not I’d have been up for 4 hours labour! Kawasaki wake up and put them on at the factory or smart people will just buy a set of Oxfords for a hundred bucks. No dealer is going to try to sell your OEM’s knowing what’s involved in fitting them. And don’t think we don’t need heated grips in Australia because it’s warm here, that’s just stupid and ignorant.

The suspension on the factory settings, is firm but appropriate to soak up the bumps with my 95kgs on board. It hangs on through the bumpy corners without getting upset. My impression is the suspension is  better for me than the MT-10 I rode on these roads a while back. Here it is at Freemans Waterhole on it’s first day out. 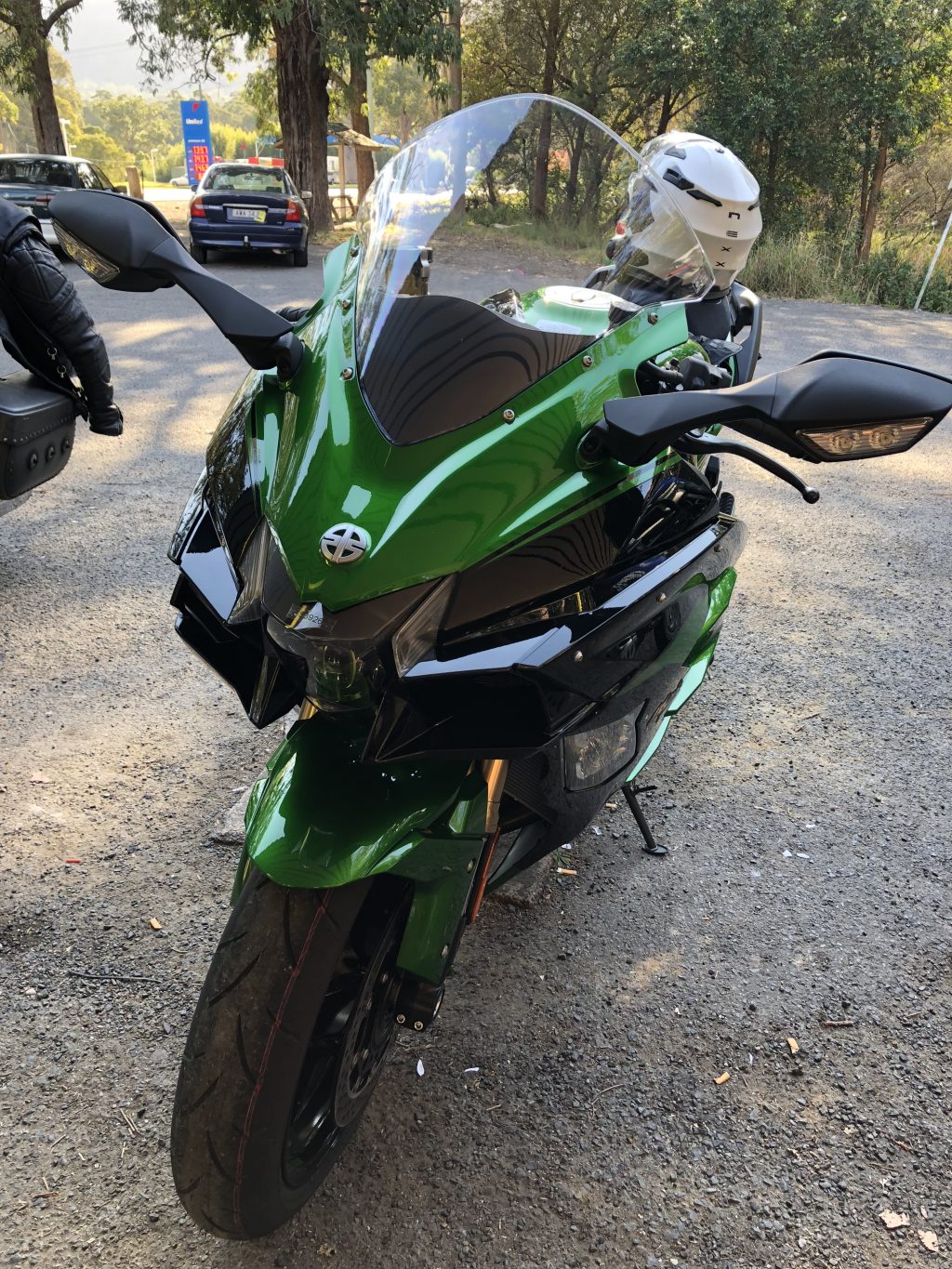 I actually got a full 300kms out of the first tank of fuel which I guess should be expected out of 19 litres, but it only took 17l to fill it.  When I first rode it I had it in medium power mode, that didn’t last long, it’s in high now.  The throttle’s a bit snatchier in high and it’s a bit “sensitive” at low speed and in traffic so you need to be very smooth or you’ll get jerked around accelerating and decelerating, actually you just do.

I haven’t had the chance to officially see if running it in  full power mode makes a significant difference to the fuel range yet.  I get a sense it does. The H2 SX is supposed to be more fuel efficient than the other H2’s though.

After 800kms when 6000rpm was “allowed” one could almost wonder why you’d ever need to take it any higher.  Of course you don’t really need to, but riding this bike you really just want to. Then after 1600kms when you can twist as hard as you like, we’ll you just do and the fuel consumption does change accordingly.

This bike has too many electronic riding aids to list here but it makes full use of the information from the IMU to give you things to look at in the beautiful TFT screen. The TFT screen has a touring mode and a sports mode. The Sports Mode has three options which will show you graphically either the Boost/Throttle, Boost/Brake Fluid Pressure or just pretty curved lines. My favourite at the moment is Sport mode 1 with the max lean angle showing . There’s three buttons you can use that scroll through options for different parts of the screen. 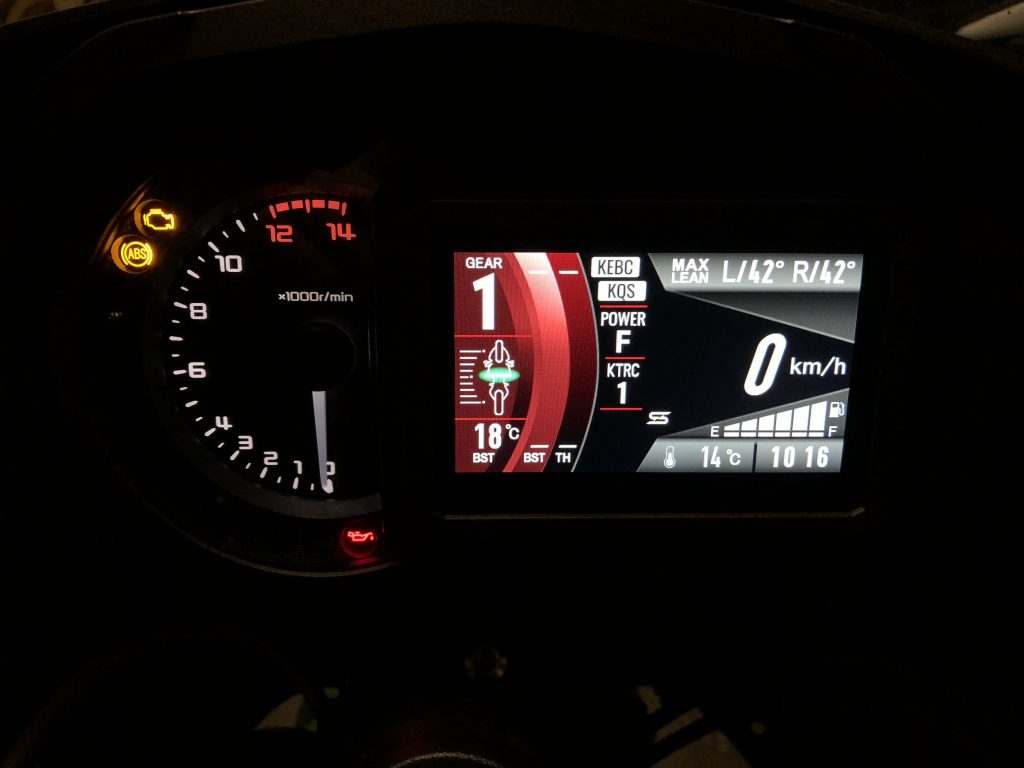 At the speed limit on the roads I’m riding it usually caps out for me at 42 degrees each side and I haven’t scraped the pegs yet. The max is supposed to be 50 odd, maybe I’ll test that out on a track one day. I admit to being a pretty conservative rider.

I’ve felt the ABS and Traction Control kick in a couple of times when I went looking for them (I have it set on TC 1). It’s unobtrusive and somehow confidence inspiring if that’s a good thing.  This bike has almost no sense of speed, so you really have to watch yourself when approaching corners.  I love to use the down quickshift and brake a little late just for the awesome sound the motor makes as it vents while the rear wheel happily just does what it’s supposed to.

I’ve put the panniers on a shelf inside the house. Standard they come with a metallic black outer top panel, a good finish that would look great on the black SX but it looks unfinished on the green SX SE. Kawasaki have green ones as an option for $275AUD that look like they belong on the bike, and I bought a set. That’s a bit of a gouge, they should supply the green with the SE.  Rumour has it that they are rated to 300kph which is fine, although for a true sports tourer a 200kph rated set with some more space in them might have been more sensible but wouldn’t look nearly as good. They are easy as pie to get on and off. Here it is with the green panels on the day they were fitted… nice! 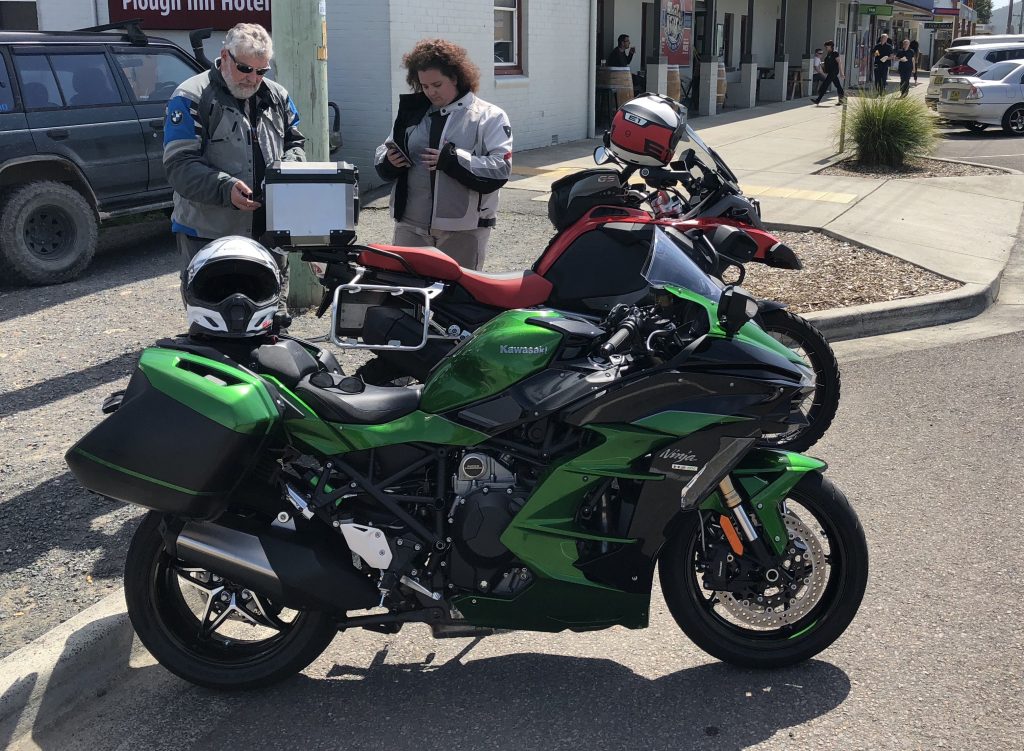 The riding position is great for me. Sure it’s a little tight on the knees compared to my ADV bikes but I’ve had no problems riding 300km in half a day with a short planned break and I don’t anticipate that long days on this bike will be a problem. The forums tell me that Knight Designs Ninja 300 lowered footpegs fit this bike if you need more room.

The seat’s firm but comfortable enough during the to give me confidence in it, but I’ll throw my airhawk on it if I do any serious day rides anyway. I’ll probably knock out an Iron Butt SS1600k on it in the next month or so to see how it really stacks up for comfort but I’m sure it’ll be better than the CBR125R over that distance!

The bars are higher than the sporty H2’s and I can sit up comfortably without putting undue pressure on my wrists. Sitting straight up and stretching the fingers isn’t an issue either. There are some 5mm and 10mm spacers to lift the bars available from webike. The bigger screen on the Kawasaki H2 SX SE keeps most of the wind off my torso, I can feel some on my shoulders, and my helmet is in clear air.  Height challenged people might have a different experience though. For now I’m just wearing my Nexx XD1 Adv Helmet and it’s fine.

The OEM Bridgestone Battlax Hypersport S21R’s are grippy and feel great on the road.  I get a sense that the front doesn’t have quite the feel in tight stuff that I’d expect but maybe that’s something I will get used to as I become more familiar with the bike.  I’m more used to 19″ and 21″ front wheels and ADV tyres or PR4’s nowadays when I’m cranked over so something that responds so fast is a treat!

This bike isn’t cheap with a $34,490 ride away retail price. Insurance quotes for me ranged between $1250 and $1700 with 65% no claim. At the dealership the A service will be about $400 and the major B probably over $1200. Apart from the general maintenance you’d expect the service interval is 12,000km.  This bike does not require the additional maintenance the H2R needs after 15 hours of operation over 8000 rpm. I’ve met a couple of people while riding who thought this applied to all the H2’s.

So now I have a sportsbike ( hypersports tourer, whatever), bucking the trend of us oldies going for Adventure Bikes.  The more I ride it the more sure I am that this is exactly the right bike for me right now.  So long as I still have the ADV bikes in the shed, that is. I like it more every time I ride it!