After test riding and bringing a new KTM 1290 Super Adventure home an opportunity arose to bimble with the CSBA. With the panniers off and no farkles I set out from home in the fog to the meeting place, Macas at Cessnock.  I filled the KTM’s 30 litre tank on the way out of town keen to see what sort of economy I could expect from the 1301CC V-Twin.

The first part of the ride was freeway with the cruise on, effortless. Then some 60-80kph zones which confirmed my experience that the fuelling of the KTM is fantastic, no surging at low speeds and bags of torque down low so it’s not fussy about which gear you are in.  It’s so easy to ride in town for such a large bike. I arrived in time for a coffee and chat.

We left Cessnock and headed west past Millfield to Wollombi then north through the tight bends of Paynes Crossing Road to Broke. We continued north to Jerry’s Plains for a breather. 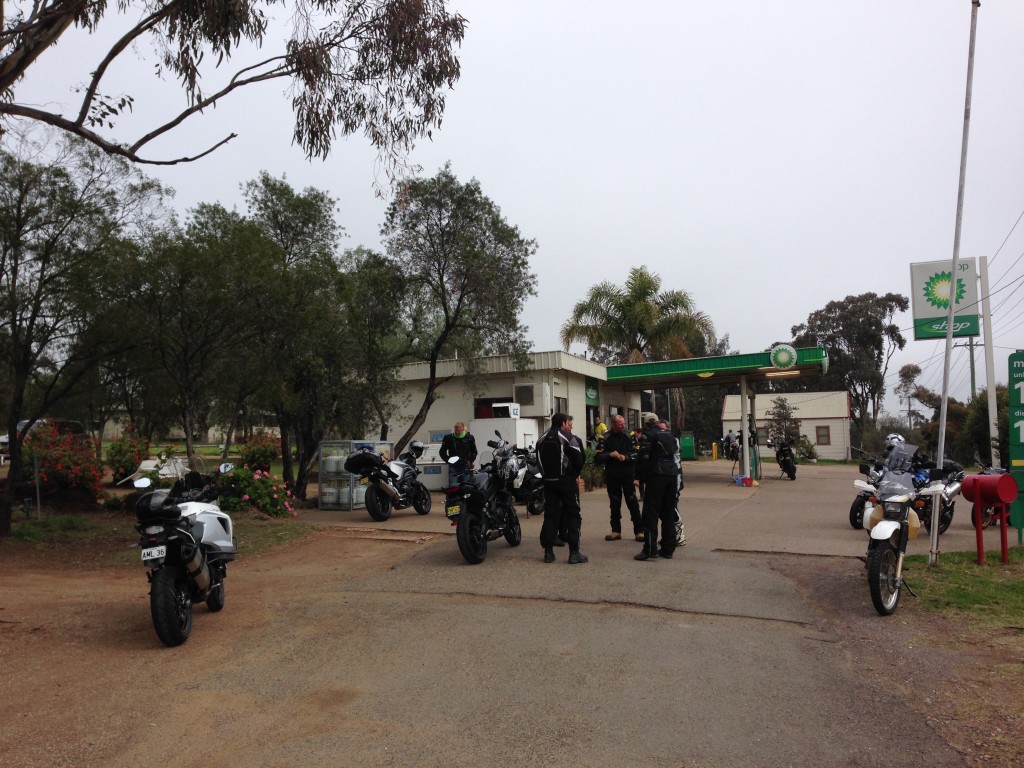 Then we took the back way to Denman through Appletree Flat and Bureen.  I love that part of the Hunter Valley, except for where you can see the mines.  I started to settle in to the KTM and how it felt on rough roads and around copious amounts of bends. I was feeling extremely positive about buying it.

At Denman one of the other riders, Justin, who has a BMW R1200GS asked me what I thought of it and put it straight to me “Do you think it’s the best bike you’ve ever had?”  Wow, that took me by surprise and I gave it some thought. I said “You know what?  I think it might be.” I’ll need to dwell on that more over time. Here we are at Denman. 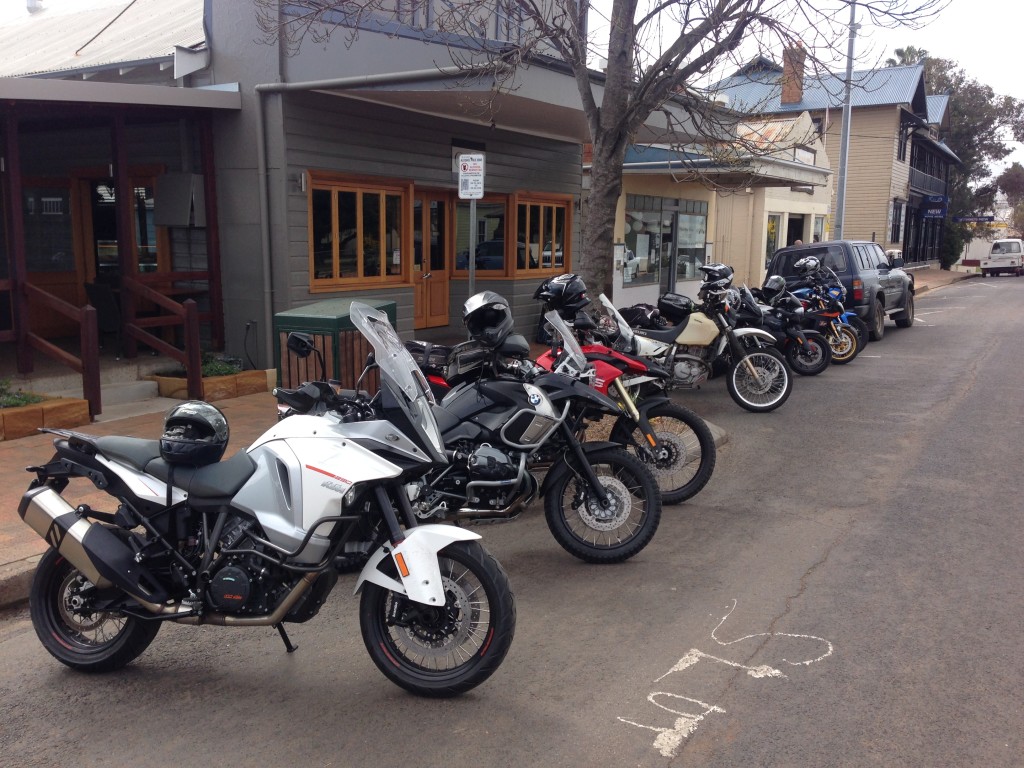 A coffee and a curry pie dispatched and we were on our way on backroads I didn’t even know existed west of Muswellbrook and Aberdeen punching out briefly onto the New England Highway to cross it and head north east through Gundy.  I was still running the 1290 Super Adventure in and getting a feel for it so I didn’t want to press too hard.  But even with a light fist it I was amazed at the sure-footedness of the bike as I effortlessly flicked it through corner after corner after corner on the way to Moonan Flat.  The Traction Control, ABS brakes (not needed), semi active suspension and any other electronic wizardry they have on this bike just plain work. It’s not intrusive, even on comfortable street settings I’d hook around a rough bend, look down at the speedo and think “I shouldn’t have been able to do that!”

We had a nice lunch at the Moonan Flat pub, bangers and mash for me, yum and, as you do, we spent some time talking about life, bikes, family, bikes and bikes. 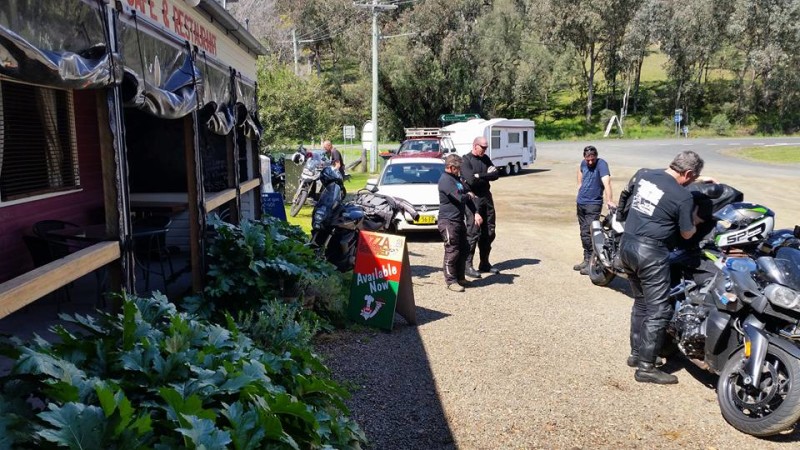 before we headed back the way we came. I followed an Aprilia RSV4 and a couple of fast looking BMW’s out the gate and it immediately became clear they were up for some fun.  Why not?

Still “run in” easy on the throttle but ripping through the bends there were no issues with matching it with these bikes on that road. The suspension was probably an advantage for me but with minimal activity on the bike to minimise the number of boot scrapes the KTM felt like it was on rails.  The OEM Conti Attacks, which I’ve never used before on any of my bikes, bike got hot but showed no signs of letting go unexpectedly.

We stopped for a breather while the others caught up then rode the scenic Glenbawn Road to Rouchel Road where we stopped.  Some of the group were taking the gravel to the back of Singleton, the others on road bikes were taking a tarred route home.  I was sorely, sorely tempted to follow the other Adventure bikes into the dirt but I resisted.  I had to keep reminding myself that I didn’t buy the KTM for dirt  and creeks (shut up!) and it was only just a week old – way too soon.  My Super Tenere will remain my off road bike, at least until I kill it. 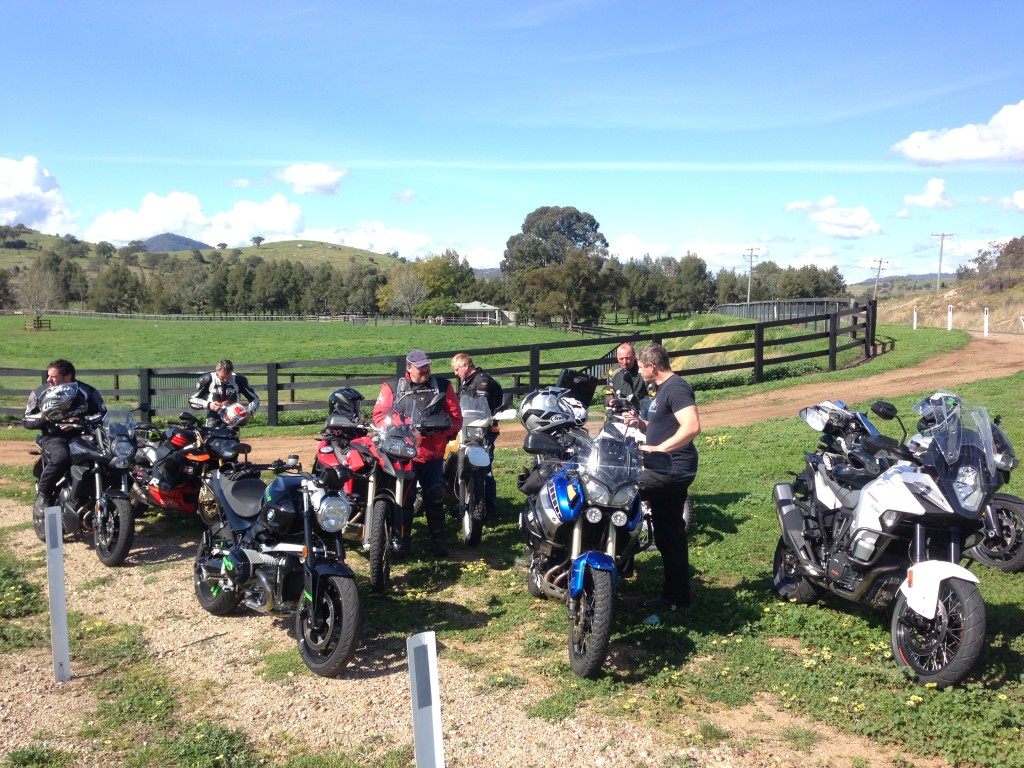 After a chat and goodbyes to half the group the rest of us rode back to Aberdeen for my first fuel for the day, the gauge, was telling me fuel was low but the amount to fill it gave me pause to consider that there are some idiosyncrasies with the way the KTM’s reports fuel reserves and distance to empty. That’ll take some getting used to.

After refuelling we took some of the same roads back towards Jerry’s plains, bypassing Denman this time and I left the remainder of the group shortly after that to head home back down the Hunter Expressway arriving home only an hour late this time.

So the bimble distance was about 500km. Great blokes, good coffee, great food and some roads I’ll definitely ride again.  Is the KTM 1290 Super Adventure the best bike I’ve ever owned?  It’s too early to call but it’s in for a chance.