A bit of a mixed bag here, a 6 day trip with 5 riding days on the Africa Twin.  Two of the days were Iron Butt Rides with three sweet little bimbles littered among them.

Today’s ride was an IBA SaddleSore 1600K leaving Newcastle NSW fpr Wilcannia, riding dirt on the Cobb Hwy to Ivanhoe then through Hay NSW and Mildura SA to Renmark SA for the 2nd annual IBA Australia. To read all about that check out the Iron Butt Ride Report.

No riding, just socialising with fellow IBA Riders in Renmark

Today’s bimble on the Africa Twin was a short ride to Roxby Downs SA .  It took a while to get away from Renmark with lots of chatting with others and saying goodbye.  Frog, Cuddles, Ron, Marls and others were among those of us who weren’t in a hurry to leave.  Others had been riding out for parts near and far from 4am.

I rode from Renmark towards Adelaide taking a right towards Morgan.  The weather was a bit windy and coolish but pleasant enough.  It was good to be back on the bike after a day off. The hills in this area have usually been green when I’ve been through here, today they were mostly brown. First stop was some fuel at Burra and then a quick stop for a pic at the entrance to the old mine there.  Well worth a look if you are passing through. 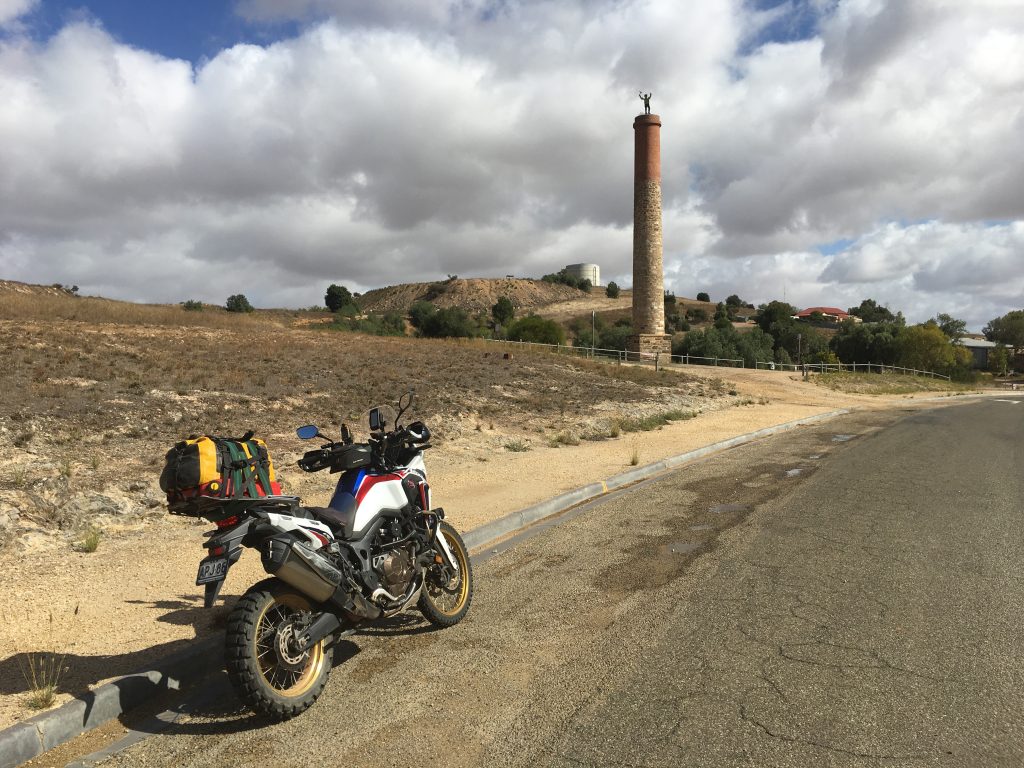 After that I stopped at Peterborough to stock up on Loins Club Fruit Cake that I know they sell there.  I wanted the cake as a food source for a big ride I had planned tomorrow.  High energy and easy on the stomach. 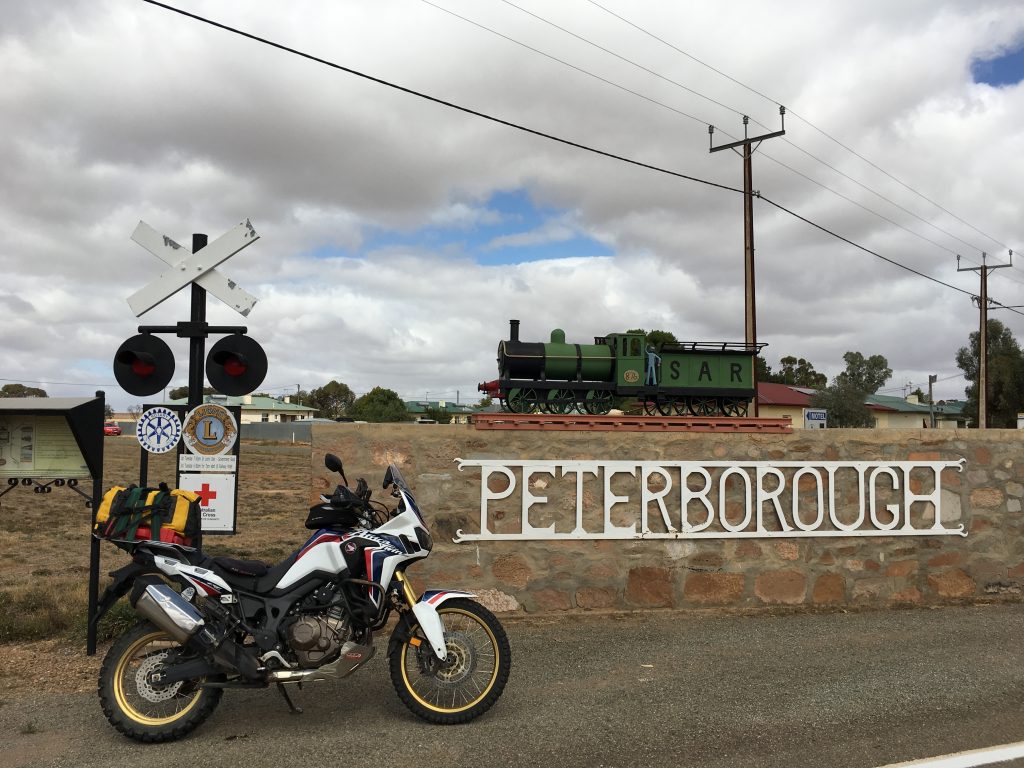 From Peterborough I rode through Orrorroo, I’ve enjoyed turning right here a few times lately to head to the Flinders but today it was straight through and a left for a quick stop at the big red gum

and from there through Wilmington and down one of my favourite pieces of road, Horrocks Pass.  After the bends I stopped at Davo’s plaque and took a moment to reflect on some of the great trailblazing rides Davo, the founder of FarRiders,  did in the earlier days of long distance and IBA riding in Australia.  I also took a moment to snap a banner shot. 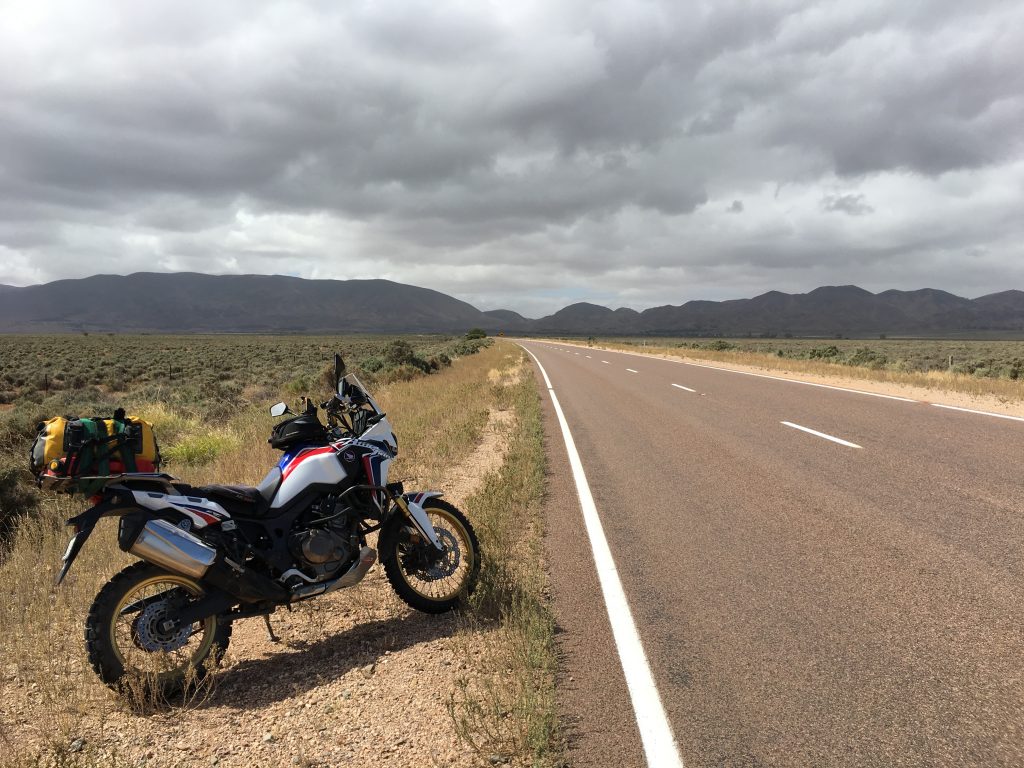 From there it was a dawdle to Port August where I fuelled up. Just out of town Mrs Wom called, she was driving from Adelaide to meet me in Roxby Downs and was about an hour and a half behind me.  I stopped at Spuds Roadhouse at Pimba for a plain burger and a coffee, not in any hurry to arrive.

Then past Woomera and on to Roxby Downs where we had a cabin/motel room booked at the Adventure Park.  Mrs Wom arrived a while later, we went shopping, checked out the start for tomorrow’s ride, had dinner and an early night.

Today was my first attempt at an IBA Dusty Butt ride. Basically it’s 1610+km (1000 miles+) all on gravel/dirt roads in 24 hours.  If I was successful it would be the first time one had been ridden in Australia.  To see what happened have a look at my Iron Butt site and the Dusty Butt Report.

After finishing yesterday’s massive ride after midnight I was slow to get started today.  I was very sore, tired and frankly not as keen as usual to get back on the Africa Twin.  I said goodbye to Mrs Wom who was flying home from Olympic Dam and took my time to pack and check out of our accommodation. I rode back past Woomera and Spuds Roadhouse to Port Augusta where I fuelled up at the Puma and had some lunch.  I’d received a couple of phone calls along the way from friends who had found out about the Dusty Butt.  The calls were much appreciated.

I was chatting to Karl as I gave Davo’s plaque a nod but finished the conversation just before the first 55kph corner of Horrocks.  It’s more fun going uphill!  Back through Wilmington, Orroroo and Peterborough.  I wasn’t feeling the love for taking pics today. 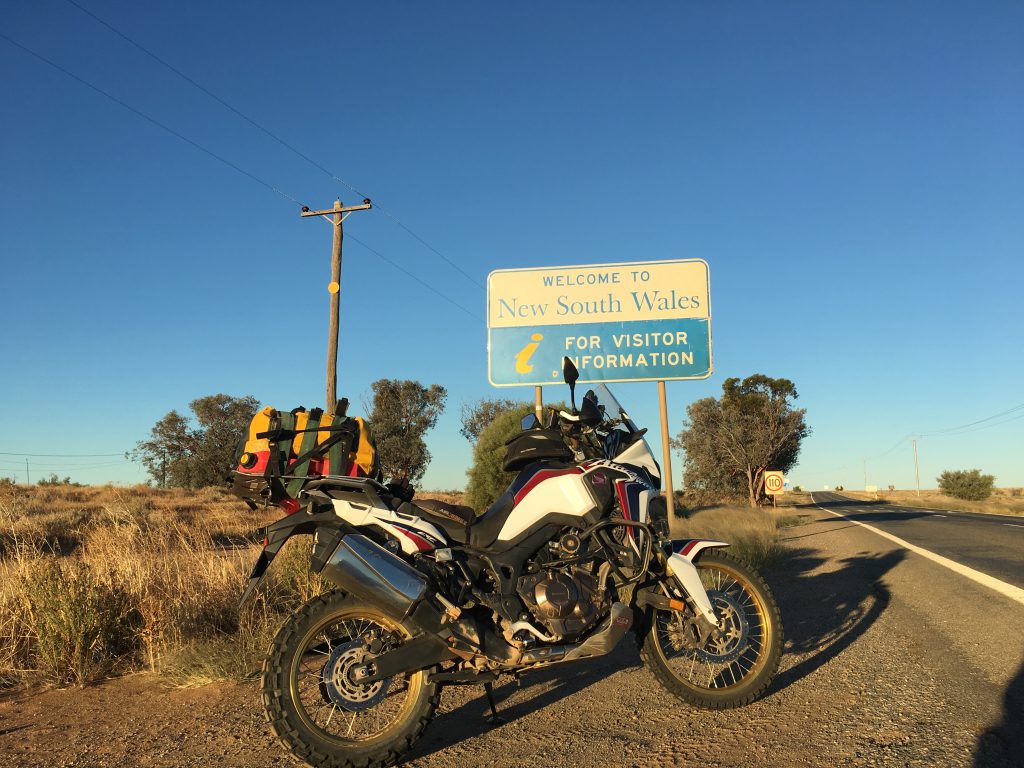 Now usually when I pass this sign I feel like I am nearly home, but not today.  Just a short jaunt into Broken Hill for a meal and hopefully a good nights sleep at the Old Willyama Hotel.  It certainly was.

I was looking forward to getting home, it’d been a big week and I only had 1120 or so kms to ride today.  But after a great feed and a good night’s sleep I was up before dawn and packing the bike.  There’s plenty of roos outside Broken Hill so I decided to wait until I just saw light before heading off.

At the Round Hill Rest area I had to stop and take a quick pick of the pre-dawn.  Photos don’t do it justice, it’s a great time to be out. 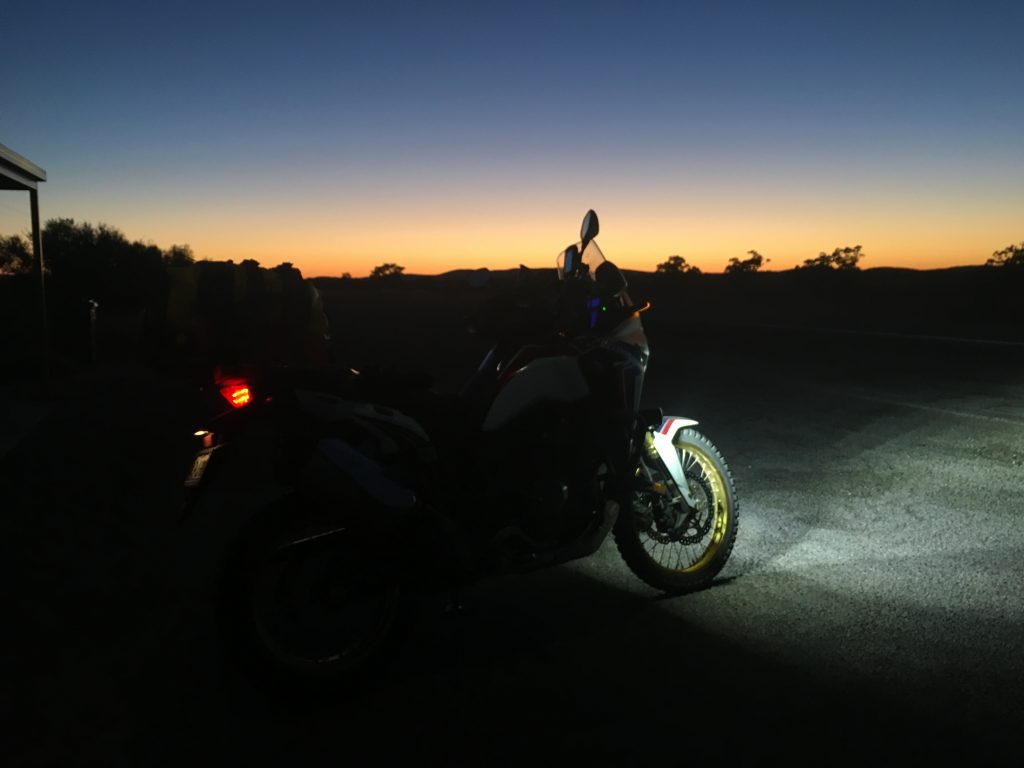 and a little while later it looked like this, amazing! 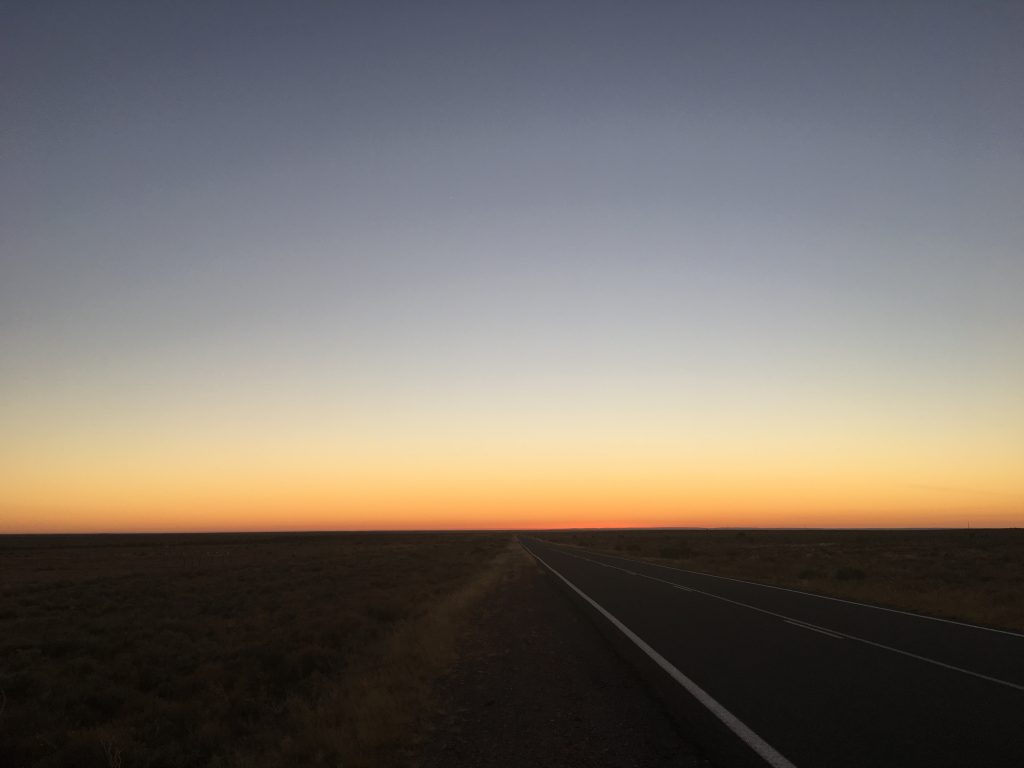 Until the sun got over the horizon, then it was straight into it and some vision issues for a while until it got higher in the sky.

I passed through Wilcannia and headed for Emmdale for the usual fantastic bacon and egg roll and a chat with the backpackers. Fuel economy was good so I had no real issues with the 300k’s travelled so far. 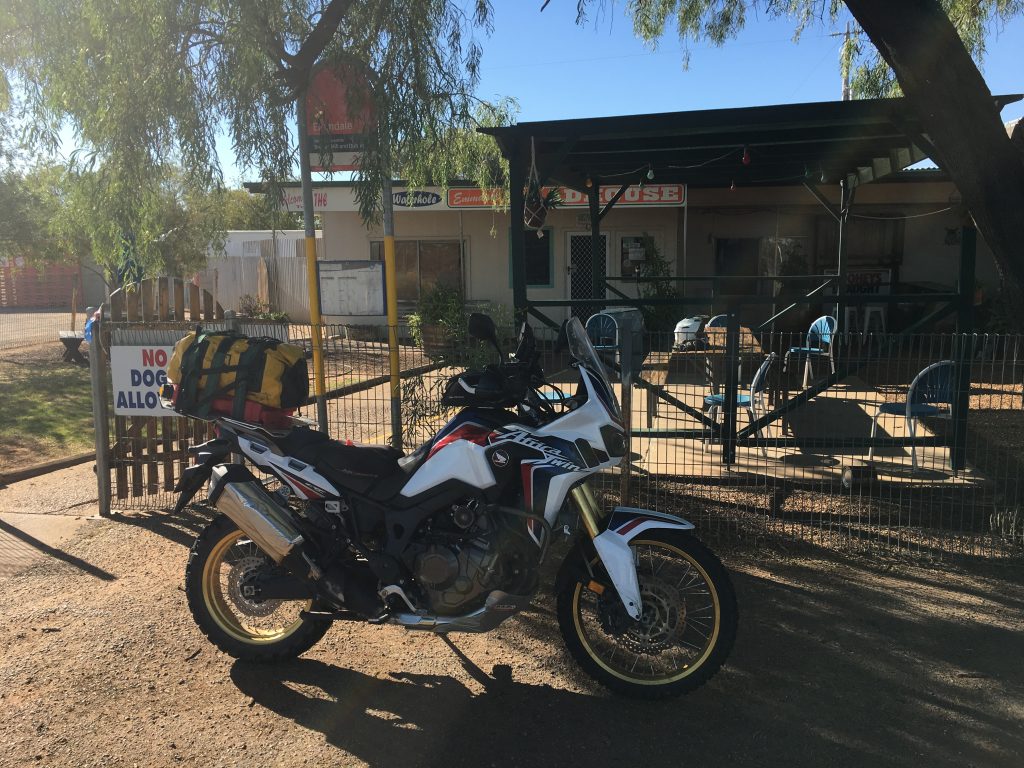 From Emmdale the day started to warm.  I got fuel at Cobar and had to stop here, I don’t know how many pics of this I have now! 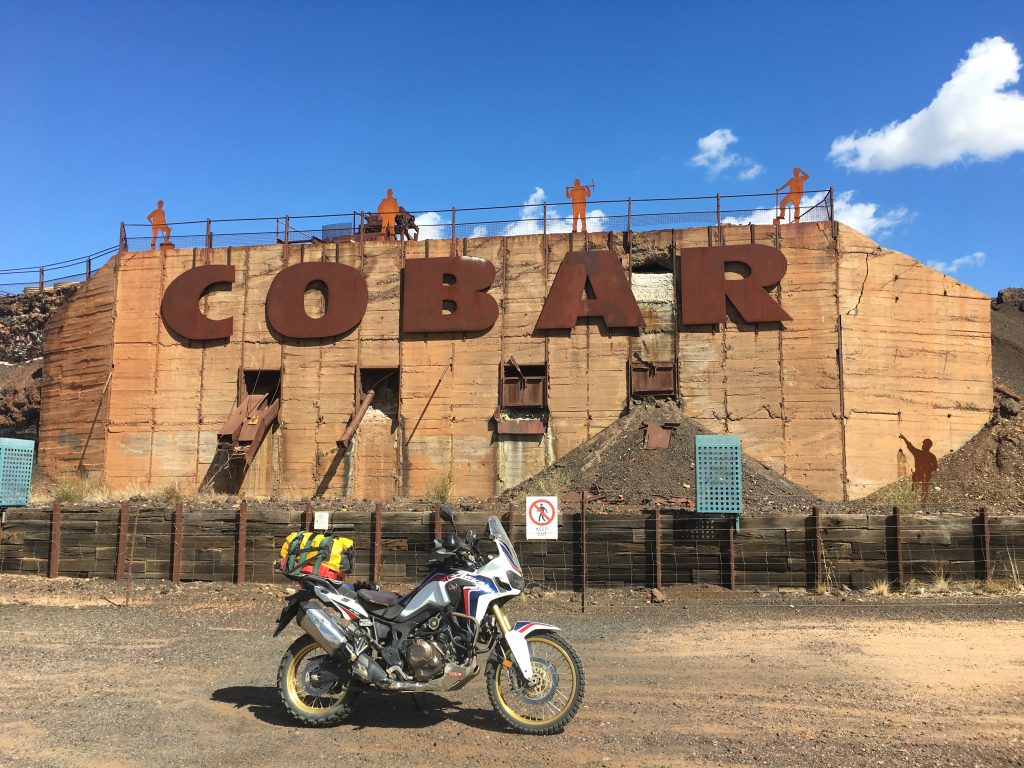 Next I rode through Nyngan heading for Nevertire, Warren and Gilgandra.  It was busy at the Shell Truckport there,  school holidays, but I took some time to have a plain burger and a coffee and filled the Africa Twin’s tank.  One more stop to home which would be fuel at Merriwa.  However it turned out to be two stops.  After fiv days on the road and 5,500+ kilometres I finally caught one of these.  Another one for the collection and my faith renewed in the quality of our road system. 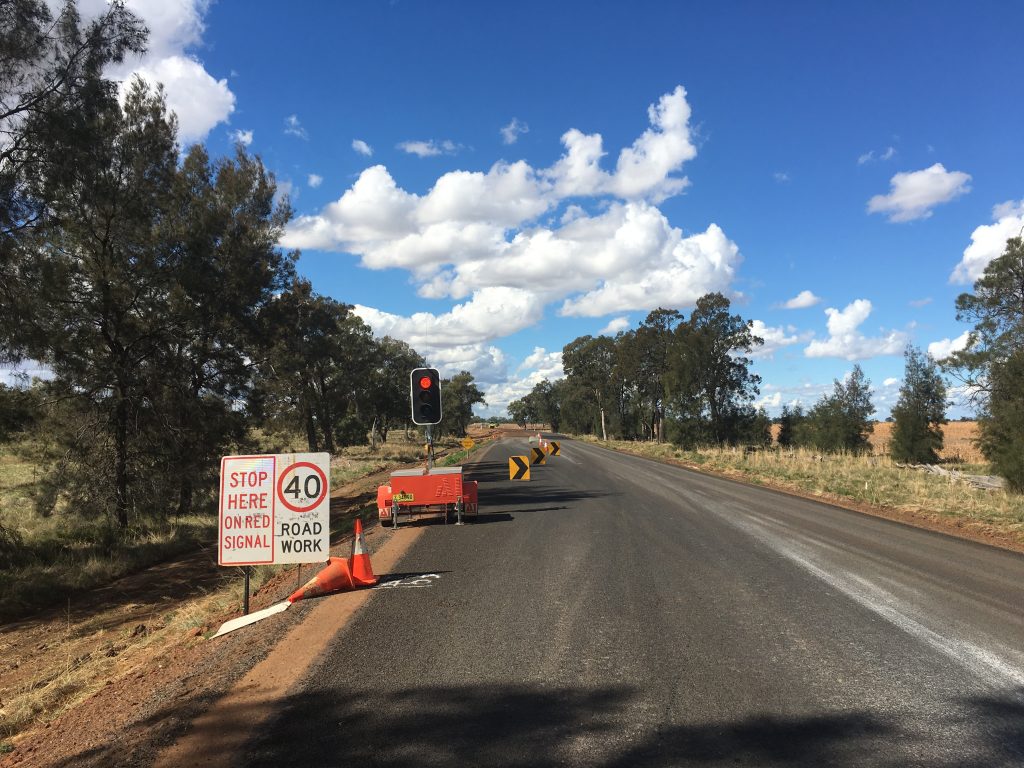 The clouds built up after Merriwa, I rode on wet roads and a couple of light showers but the worst of the local weather was in front of me and heading east.  I made it home just after dark, about 12.5 hours for the distance and a fine end to a great few days of bimbling.

The Africa Twin performed flawlessly, what a great bike! Here’s a quick spot map of the ride. 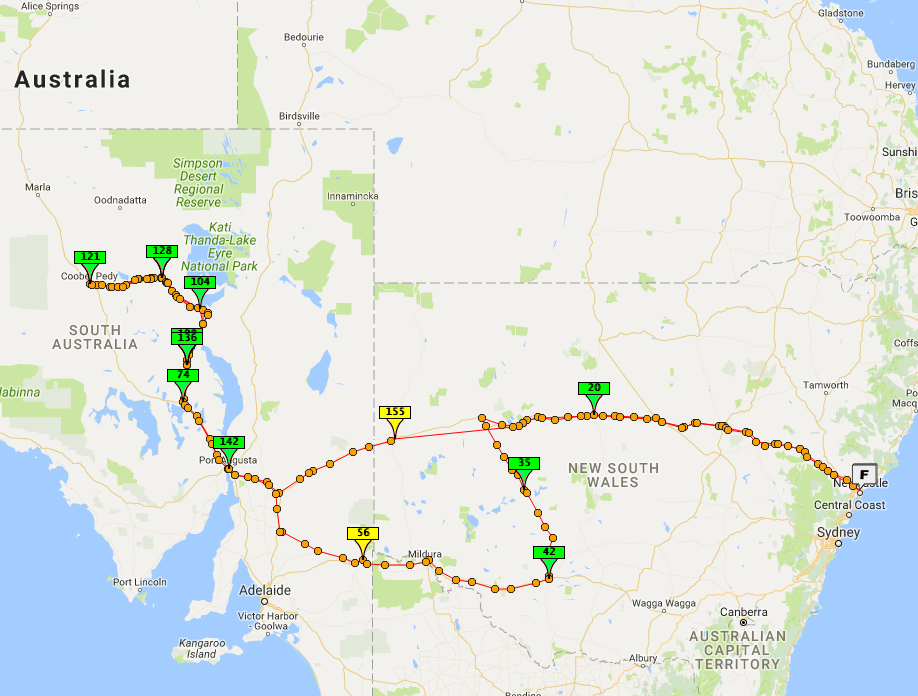